e begin with a visit to Fort Raleigh National Historic Site, investigating what happened to those first English settlers as we walk the grounds.  That evening we are treated to the iconic production of “The Lost Colony” in a picturesque outdoor theater overlooking the water.  The following day we will explore the storied  the coastline with stops at Cape Hatteras Lighthouse, the Graveyard of the Atlantic Museum and Buxton British Cemetery where WWII British sailors are buried after their warship was sunk by a German U-boat just off the coast!  We conclude our tour by launching balsa wood gliders from the Wright Brothers Monument at Kitty Hawk and flying kites on the beaches where Orville and Wilbur tested their crazy idea that man could build and occupy a machine that would fly! Saturday afternoon we will venture an hour inland to nearby Plymouth, NC, where a teenage boy designed and built an ironclad, the CSS Albemarle, in a cornfield and liberated his town from a Union blockade!

This is a car tour, with each family responsible for their own transportation.  We will meet at various locations in and around the islands of the Outer banks according to a schedule that will be included in your confirmation.  Accommodations and meals are not included in registration, although we will be designating various picnic sites where we can gather for meals and fellowship during the tour.

Landmark Tours does an amazing job at weaving together our Christian heritage with the broader history in an educational and fun way for everyone in the family! You won’t be disappointed!” —Darrel S.

In the late 16th Century, Sir Walter Raleigh was given patent to settle an English colony in the New World. He chose the coast of North Carolina and an island called Roanoke to establish his plantation. One hundred fifteen men, women, and children were left there, to be resupplied and reinforced after the ship returned from England. When the adventurers returned, no trace of the colony could be found but a few letters carved in a tree trunk. The fate of the lost colony has been one of the most debated and researched of all the mysteries that lurk in the unknown recesses of American history. We will explore the disappearance theories together near the site of the first major attempt at planting an English colony in America. We will start our tour at the fort that bears his name and enjoy the outdoor play.

An experience not to be missed! The 2022 Season of The Lost Colony celebrates the 85th Anniversary. The Lost Colony offers a refreshed production of Paul Green’s original symphonic drama. Set on the soundfront on Roanoke Island, enjoy this 85 year-old musical under the stars. Become immersed in the story of the discovery of a new world with newly enhanced musical and theatrical direction and dynamically stunning choreography. Witness the pageantry of Queen Elizabeth I and her court and celebrate the birth of Virginia Dare, the first English child born in America all while preserving the historical importance of America’s oldest mystery. An Outer Banks experience not to be missed!

The shoals of the barrier islands of North Carolina are probably the most treacherous in the United States, and are known as “the graveyard of the Atlantic.” More than 3,000 shipwrecks tell the story of that danger, over five centuries. Five historic lighthouses grace the shoreline today, although technology has replaced them in efficiency in keeping the boats off the rocks and the bottom of the ocean. Join us at the Cape Hatteras Lighthouse, the most distinctive and famous of them all, finally silent after 148 years of service. If it opens, we can climb the 257 steps to the balcony! The stories of the shipwrecks are endless, each different, yet each the same.

Graveyard of the Atlantic Museum

The coastal region of the Outer Banks contains the remains of hundreds of ships that were sunk due to war, piracy or weather. You will see many interesting artifacts recovered from shipwrecks, including a German Enigma machine from the German submarine U-85 that was sunk in 1942. Exhibits featuring General Billy Mitchell, the Father of the Air Force, and his ship-bombing demonstrations off the Cape Hatteras coast in 1921, pirates including Edward Low, Anne Bonny and Blackbeard, Civil War blockade runners, and more are on display in this amazing museum.

After Germany declared war on the United States on December 11, 1941, German U-boats quickly became a deadly threat, sinking 35 Allied ships on the East Coast in January 1942. In March 1942, the Royal Navy sent 24 converted trawlers, including the Bedfordshire, to assist the United States Navy with anti-submarine patrols along the East Coast. The sailors buried here were crew aboard the Bedforshire, sunk May 11.

The Wright Brothers of Dayton, Ohio, sons of a minister, and men with a vision to build a machine that could escape the bounds of earth like a bird, searched the United States for a private place with lots of wind, which could potentially provide the environment to try out their invention. Providentially, Kitty Hawk, North Carolina proved to be just that place. On December 17, 1903 at Kill Devil Hills, Wilbur and Orville made four flights with the first successful airplane, changing history forever. If any two people with good ideas and indefatigable perseverance made a difference in the advance of technology, it was the bicycle mechanics who founded the aerospace world. We can visit the very sand dunes where those flights took place and learn the whole story of the history-changing event.

From April 17-20, 1864 Confederate forces under General Robert Hoke attacked the Union Garrison and Naval Forces at Plymouth, North Carolina. The great secret weapon of the Southern combined operation was a powerful ironclad ship—the CSS Albemarle—that was designed and built by a nineteen-year-old engineer/inventor, which steamed down the Roanoke River to Plymouth to recapture that town. The iron monster sank two ships and scattered the fleet, while the infantry, cavalry, and artillery assaulted the forts from the land. The Yankee forces gave a good account of themselves, in this second largest battle of the Civil War in North Carolina, but in the end were forced to surrender. Those captured were sent to Andersonville prison, where they became known as “the Plymouth Pilgrims.” Join historian Bill Potter as he tell us the whole story, especially about the captured regiment from his home county, and as we visit the historical museum (if open) that displays the artifacts.

Large 30-to-100-foot kites will be flying high on display and Landmark will give you kites of your own! Take FREE stunt and power kite flying lessons, and bring the kiddos over to the kite-making station.

This tour is a car tour. Each family is responsible for their own lodging and meals, and transportation. All venue admissions are included in your registration fee. If you have any questions, or if we can be of service in any way, please don’t hesitate to contact us.

*As with all NPS sites, Landmark Events does not charge admission for this portion of the tour.

They’ve done all the work for you! Just show up and enjoy each of the amazing venues, and soak in the Biblical interpretations and rich fellowship. You won’t regret it!” —Jessica K.

Rates run $275+ per night this time of year for even the economy chains so we are thrilled to have discovered Heart of Manteo Motor Lodge. It’s clean, simple and moderately priced. Manteo’s first motel, The Duke of Dare Motor Lodge, it has been newly renovated to retain the old world charm and surroundings while adding a modest refinement to the living spaces. Conveniently located just minutes away from the waterfront boardwalk and top attractions in downtown Manteo. We booked several rooms before they sold out and would be glad to put your name on one.

Mr. Potter and I will be staying here but you can stay wherever best fits your comfort zone and budget. Here’s a helpful link to other options. 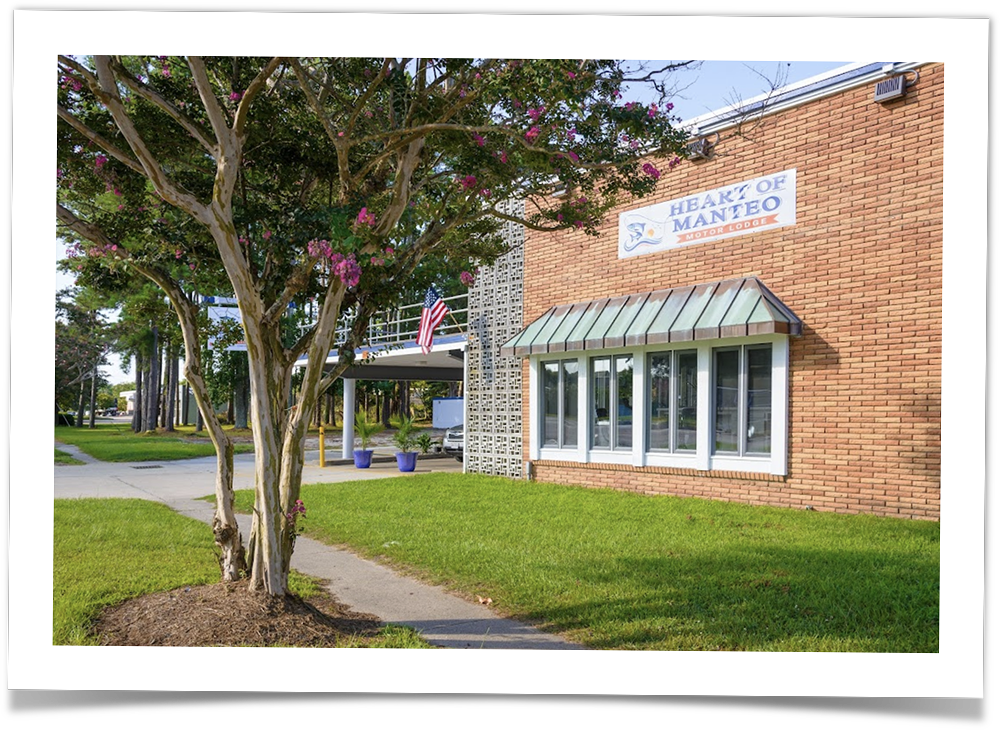 * We reserved a few of these for Wednesday arrival also. Send us an email at kevin@landmarkevents.org or call (210) 885-9351 for questions or reservations.