“For by grace you have been saved through faith. And this is not your own doing; it is the gift of God, not a result of works, so that no one may boast.” —Ephesians 2:8,9

ot all church reformers joined the Protestant Reformation in the 16th Century. Desiderius Erasmus of Rotterdam (1466-1536) was the most famous scholarly critic of his day, who never left the Church of Rome, but whose intellectual and theological acuity towered over most of his peers, if he actually had any. Witty and daring, Erasmus sparred with the theological doctors of the church, seeking reform of abuses. He challenged Luther in both theology and tactics, and, while remaining loyal to the Papacy itself, excoriated the Pope to the brink of heresy. All the while, he established the highest standards of Renaissance and Reformation scholarship. He became known as “the Prince of the Christian Humanists.” 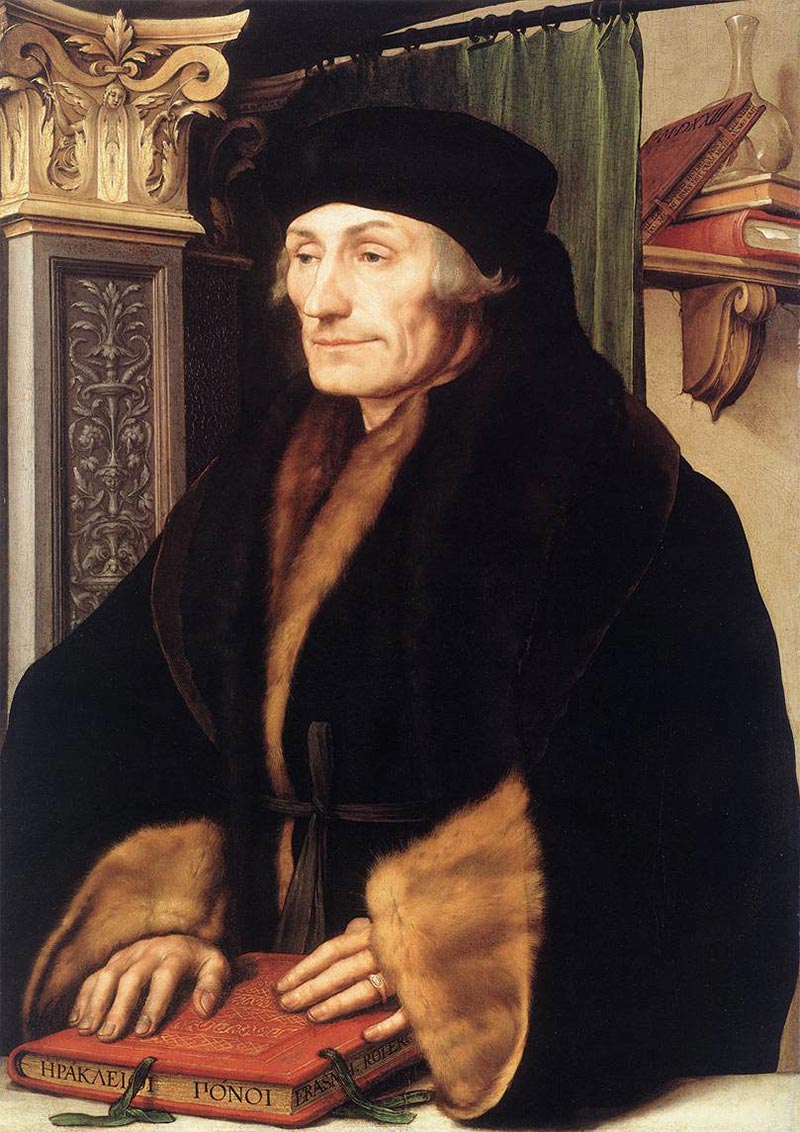 Born out of wedlock to a Catholic priest and a woman about whom little is known, in Gouda near Rotterdam, Netherlands, his given name is unknown; he was christened Erasmus, after his father’s favorite saint. Both parents died in 1483 of the plague. Erasmus attended a prestigious monastic school beginning at the age of nine and learned both Latin and Greek, languages he eventually mastered beyond all contemporaries. It was an era of intellectual ferment and inquiry, and the brilliant young scholar joined the same order as Martin Luther—the Augustinians. Although he was ordained to the priesthood at the age of 26, his reputation as a humanist scholar of exceptional merit, as well as his ill health, brought a special lifetime dispensation from the Pope, to set aside his religious vows for full-time scholarship, a move that allowed him to remain aloof from the scholastic strictures of most other philosophers and teachers of his day. 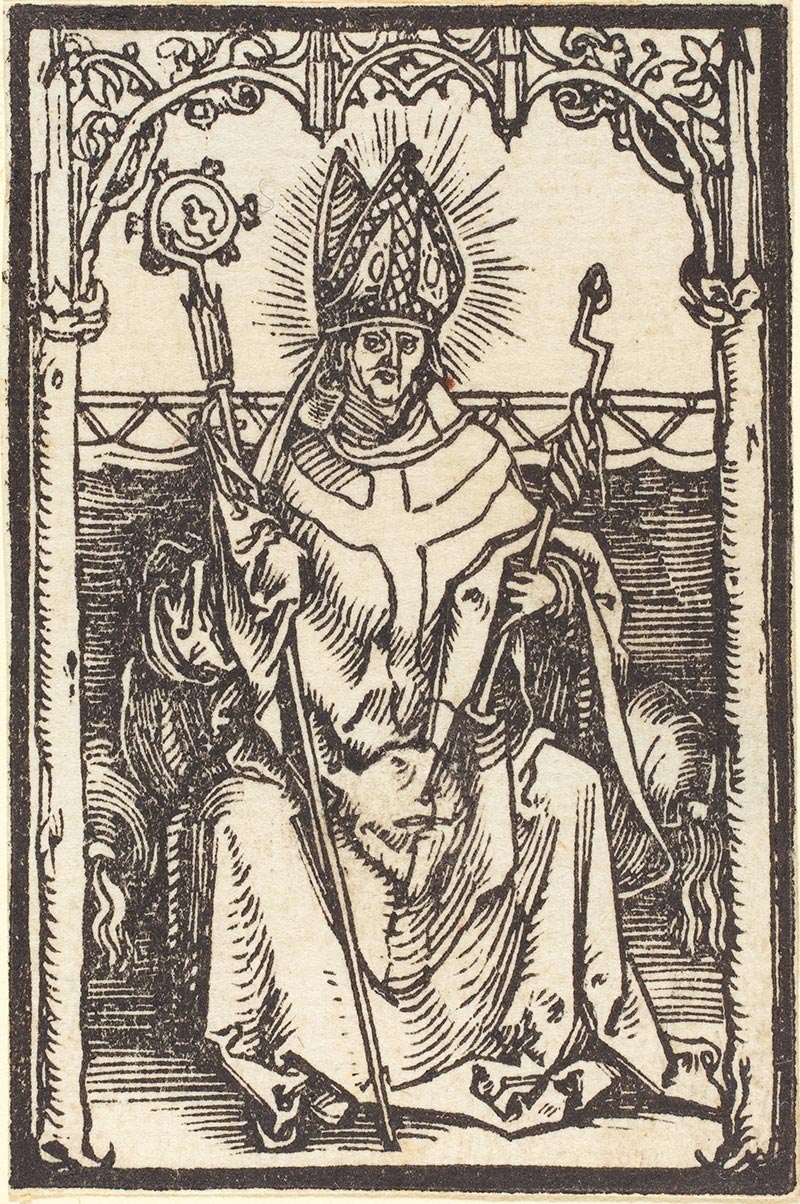 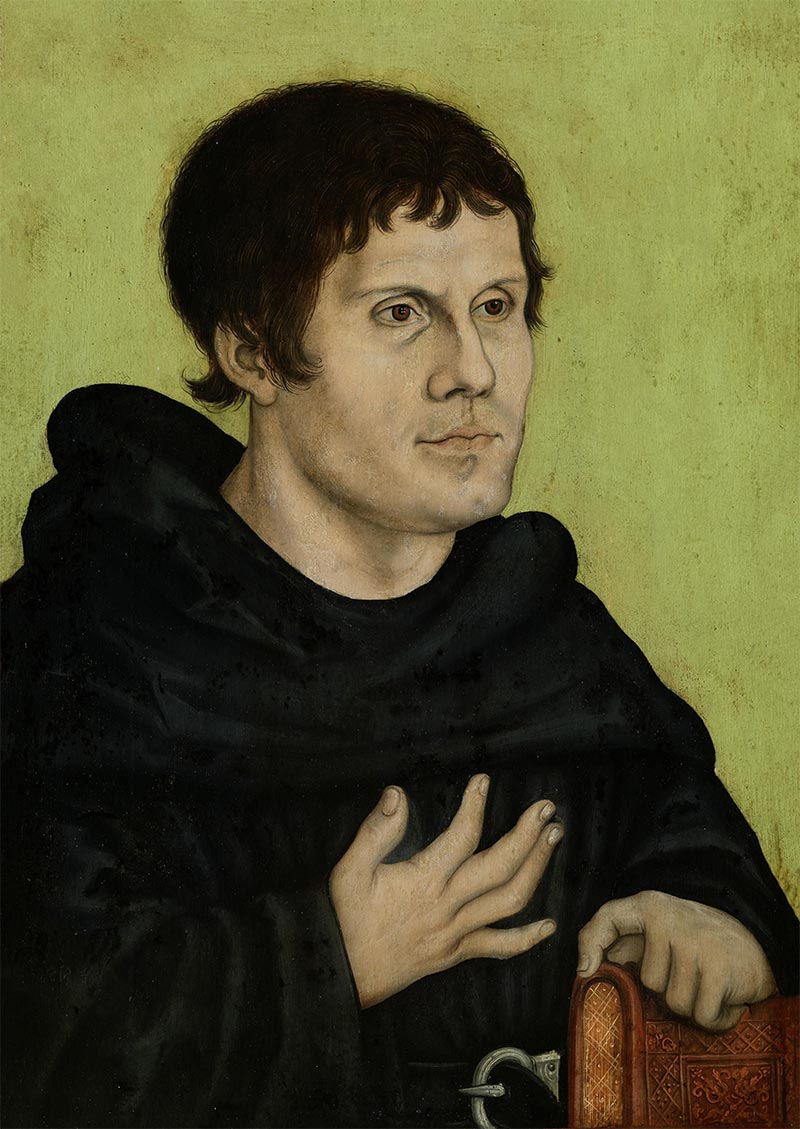 Martin Luther, an Augustinian monk in Saxony, and a slightly younger contemporary of Erasmus, came to a personal faith in Christ in the early 16th Century. He too possessed a brilliant and enquiring mind, which led him to criticize certain practices of the Roman Church. His entry into the lists against the corruptions that pervaded the Church among the Germans, coincided with the peak of Erasmus’s fame, having produced new Greek and Latin translations of the Bible, as well as popularized criticism of corrupt practices within the Church. As men of humanist learning and biblical scholarship, as well as popular writers eagerly read by the educated men of Europe, the two became correspondents over the application of biblical truth, in opposition and comparison with the accepted dogmas of the Roman Church. They both attacked pride, greed, and obscurantism, but where Erasmus trimmed his theological sails just enough to avoid excommunication and separation from the Roman Church, Luther fought his way through heresy trials and condemnation, to break with Rome altogether, and lead the Protestant Reformation. 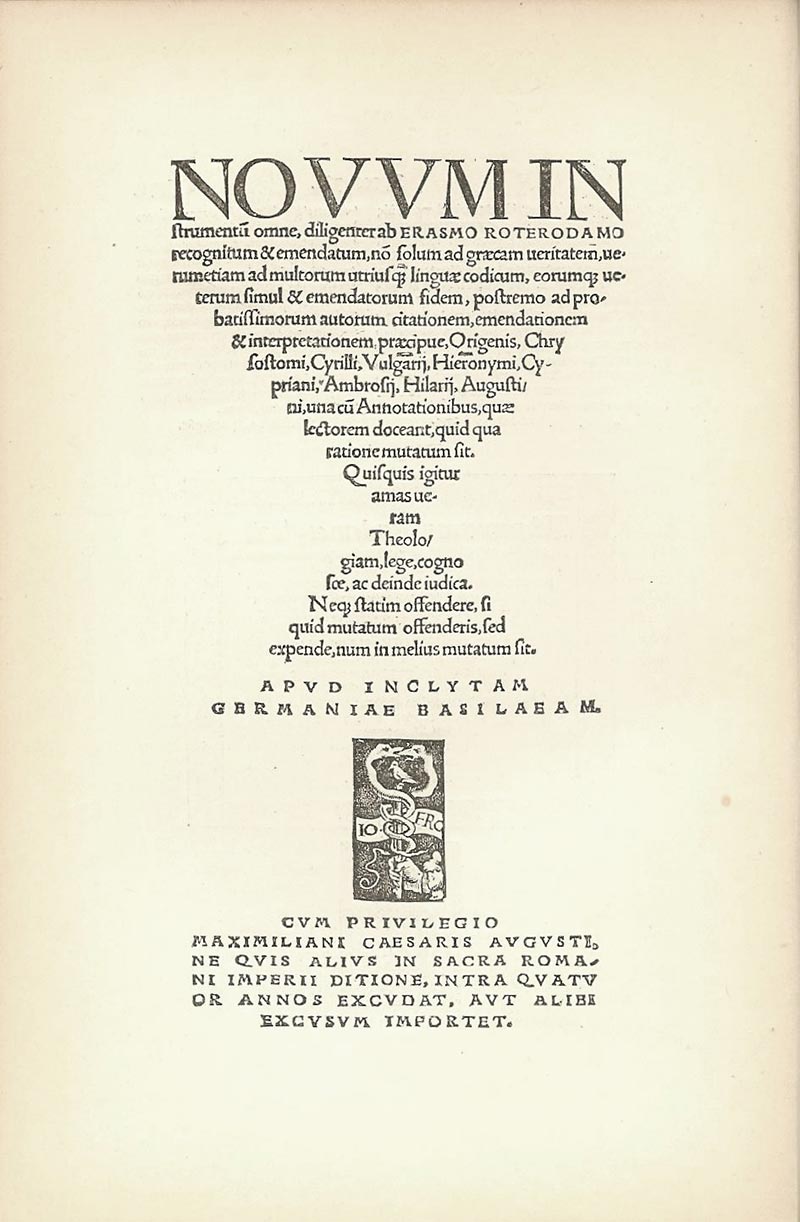 The title page of the Erasmian New Testament (1516) 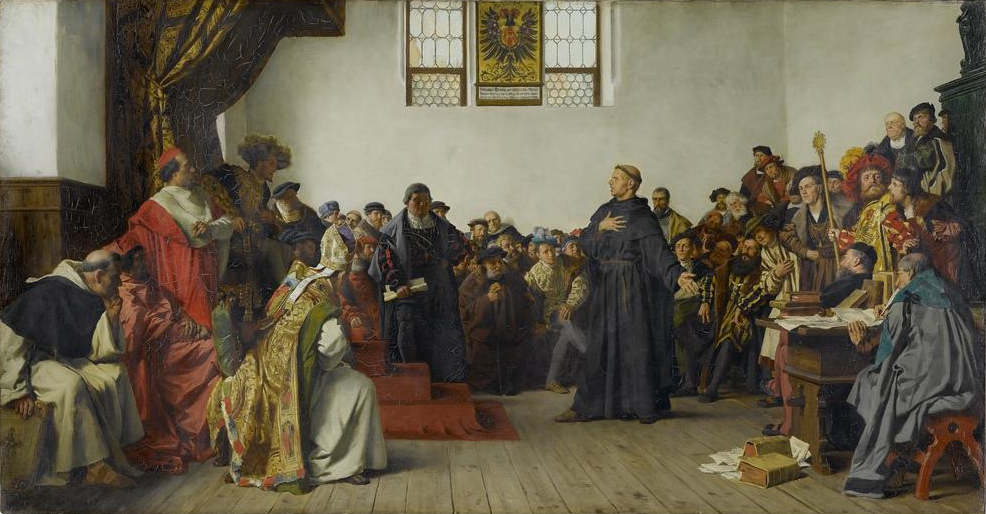 “wiser of you to denounce those who misuse the Pope’s authority than to censure the Pope himself . . . Old institutions cannot be uprooted in an instant. Quiet argument may do more than wholesale condemnation. Keep cool. Do not get angry.”

Luther’s personality was such that keeping cool and not getting angry when he saw the terrible spiritual condition of his parishioners, and the spiritual darkness promoted by unbiblical oppression and teaching by the Church, spurred him to loud and tempestuous resistance. His Saxon plain-spokenness could not be quieted or slowed in his “war against the devil and his lies.” 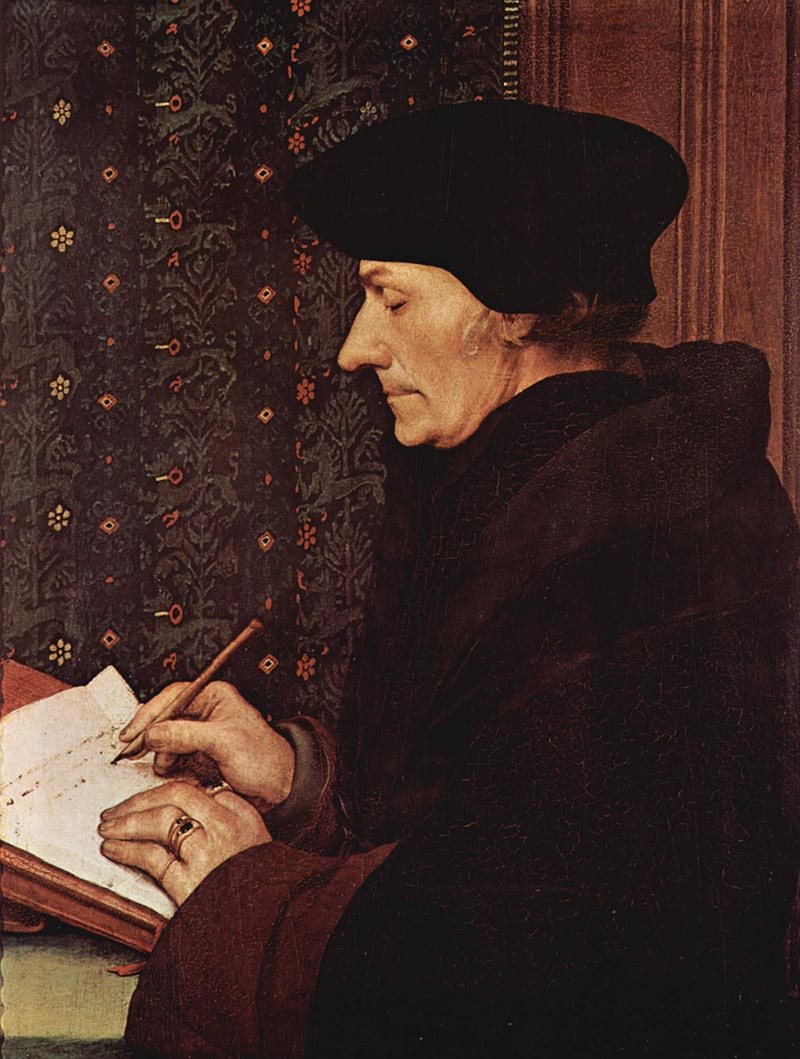 In their most famous theological debate over free will and salvation by faith alone (sola fide), Luther wrote to Erasmus in his introduction:

“[Y]our book struck me as so worthless and poor that my heart went out to you for having defiled your lovely, brilliant flow of language with such vile stuff. I thought it outrageous to convey material of so low a quality in the trappings of such rare eloquence . . . I suppose your conscience warned you that, whatever literary resources you might bring with you into the fray, you would not be able to impose on me, but I should see through all your meretricious verbiage to the vile stuff beneath . . . my doctrines are fortified with mighty Scripture proofs. . .” 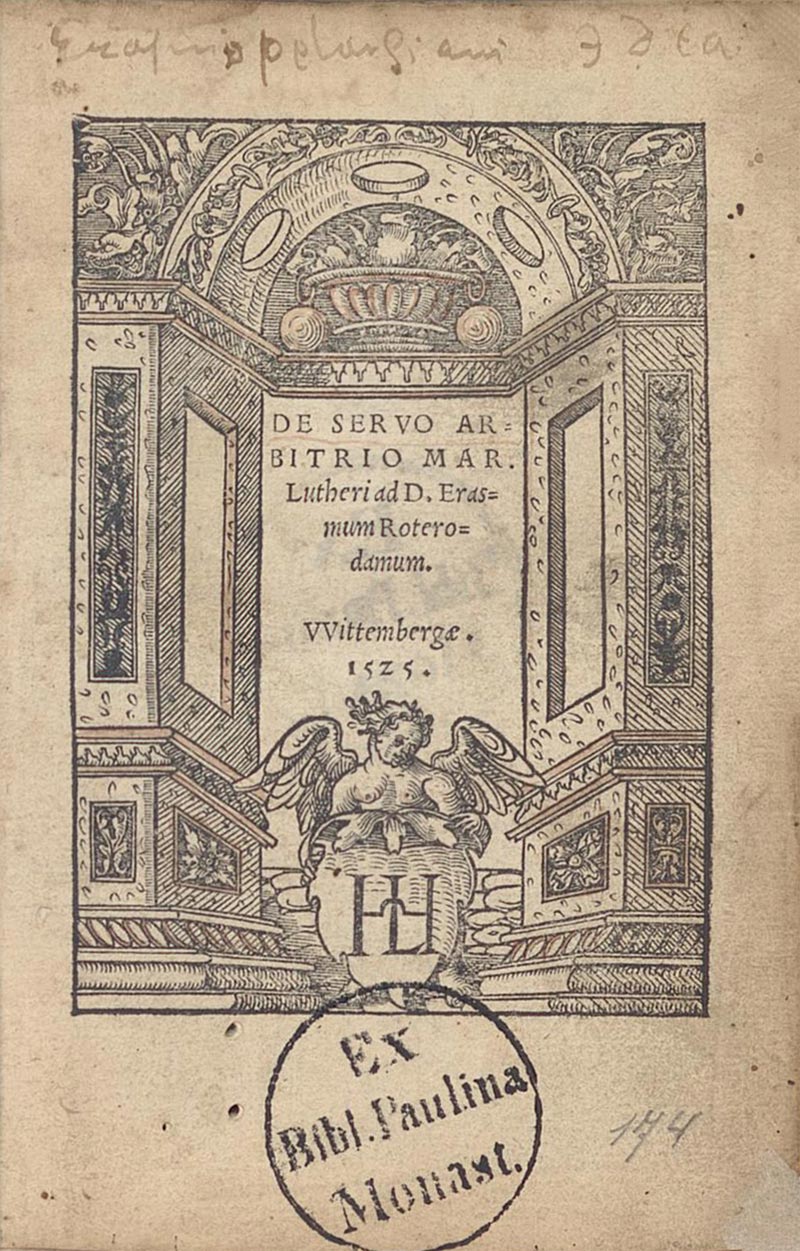 Title page to Martin Luther’s 1525 On the Bondage of the Will, his reply to Erasmus’s 1524 publication On Free Will

Both Luther and Erasmus had many enemies in the Church. Those who hated Erasmus tried to identify him as the friend and confidant of Luther and Luther’s enemies broadcast that he was a disciple of Erasmus. On the doctrine of free will and saving faith, however, as debated by them in the book The Bondage of the Will, no one could mistake one for the other in that central doctrine of Reformation Protestantism.

Erasmus spent more years teaching in England than anywhere else, although he travelled a lot, and taught in many places. He was friends not just with Martin Luther, but with Henry VIII, Thomas More, and many other movers and shakers of his day. He accounted for about 20% of the book sales in Europe in the 1530s, and his theological works and classical studies and translations were found in every library where scholars existed in western Europe. His New Testament translation became the basis of Luther’s translation of the Bible into German, as well as Tyndale’s translation and the King James Bible of the following century. His last great work, completed the year he died, was a thousand-page treatise entitled The Gospel Preacher. 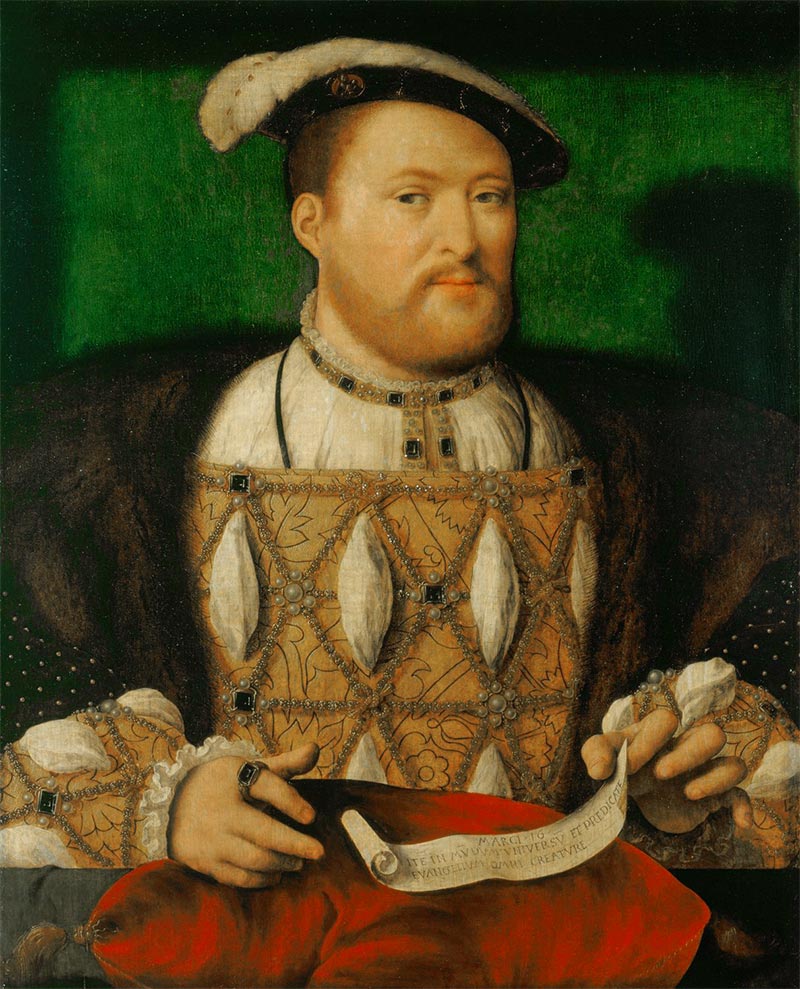 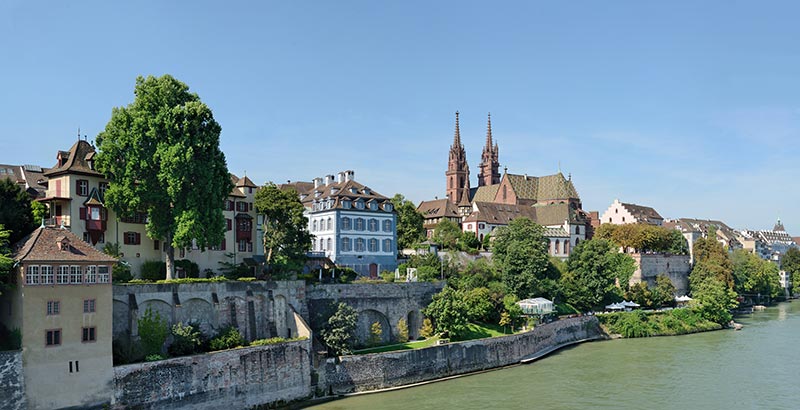 View of Basel Minster, where Erasmus is buried, as seen from the Rhine River

Erasmus of Rotterdam (who only spent four years of his life there), died in his 69th year in Basel, Switzerland, believing in religious toleration and lay access to the Bible, but still in agreement with the Roman Church on transubstantiation, Mariolatry, and Papal supremacy; but he had challenged many other doctrines and, with his biblical translation from the Greek, drawn many Reformers back to the Scriptures as the Holy Word of God, sufficient for faith and practice.