Today we introduce a new feature authored by Landmark Events Historian Bill Potter. In History Highlights, Mr. Potter will draw contemporary lessons and applications from key people and events of the past. Enjoy!

“The king’s heart is like channels of water in the hand of the Lord; He turns it wherever He wishes.” —Proverbs 21:1

n the 14th of December, 1799, George Washington died in his bed on his estate at Mount Vernon, near Alexandria, Virginia. Two days earlier he had caught cold pursuing his favorite activity in the world, riding and working about his farm in freezing temperatures with snow and sleet coming down. He felt ill the next day and the doctors were called. They were by his bedside, bleeding him constantly, trying to drain the ill-humors that Europeans since the days of the ancient Greeks, thought inhabited the blood of a sick person and needed to be kept in balance. They took about five pints from the ill ex-President. It did not restore his health.

For a fascinating Modern Medical Analysis of the Last Illness and Death of George Washington, click here. 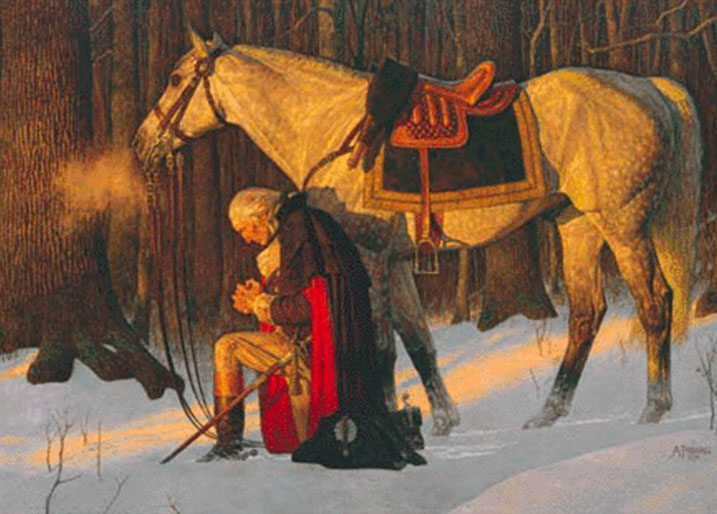 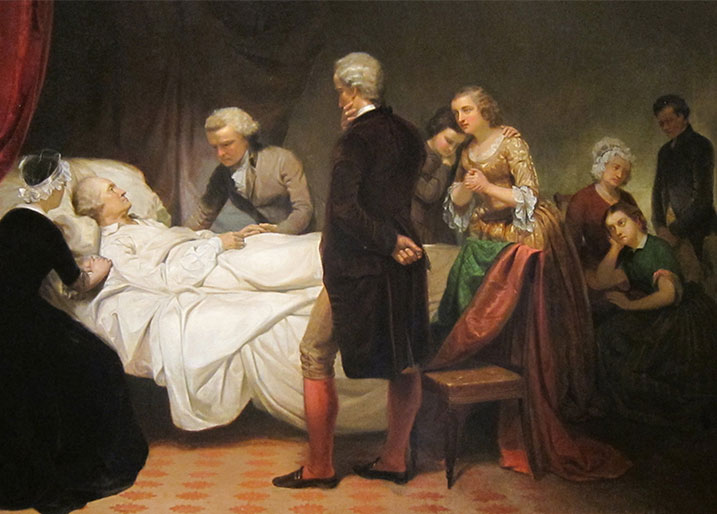 The Death of George Washington

And so died the man that in God’s Providence had been called to lead the newly declared United States against Great Britain, the most formidable opponent in the world. Not only did he lead the army to victory in a desperate war that lasted eight years, he then sheathed his sword and retired to his estate to live out his days with his faithful wife on his farm. It was an act that amazed the courts of Europe. Why would a conqueror not seize all the power he could? The nation did not let him rest, however, for he was called upon to lead the new nation for eight more years after the Constitution of the United States was ratified. In those two terms he established many precedents that Presidents have followed ever since. He could have been President for life, or declared himself king, but he again laid down the scepter once again, and retired to his beloved Mt. Vernon. And to what did this remarkable man attribute his victories and the creation of the Republic?

“This singular instance of Providence, and of our fortunes under it, exhibits a striking proof of the advantages which result from unanimity and a spirited conduct in the militia . . . I flatter myself that a superintending Providence is ordering everything for the best, and that, in due time, all will end well.” —Letter to Landon Carter, 1777

“Glorious indeed has been our Contest: glorious, if we consider the Prize for which we have contended, and glorious in its Issue; but in the midst of our Joys, I hope we shall not forget that, to divine Providence is to be ascribed the Glory and Praise.” —Letter to John Rogers, 1783

George Washington’s life and example to us reverberates with perseverance in time of trial, faithfulness and honesty in relations with men, and trust in the Providence of God for the outcome. His sense of God’s control of history did not weaken in the least his belief in the absolute necessity of man fulfilling his duties with all his strength and powers in this world.

In our own times we need to study Washington’s example of striving for virtue in a sinful world. Though imperfect and troubled by the times, he self-consciously tried to follow the high ethical standards of the Christian faith in his personal life as General and President. There really is an eternal and true law of God for which man is accountable. Our history tour of Mt. Vernon every year reinforces the maxim that, though dead, Washington still speaketh.

“He teacheth my hands to war, so that a bow of steel is broken by mine arms. Thou has also given me the shield of thy salvation: and thy right hand hath holden me up, and thy gentleness hath made me great. Thou hast enlarged my steps under me, that my feet did not slip.” —Psalm 18:34-36

n the 16th of December, 1653, Oliver Cromwell, a leader in Parliament and former General during the English Civil Wars, became the “Lord Protector” of the Commonwealth of England, Scotland and Ireland although the latter two members of that trio resisted mightily his rule over them. 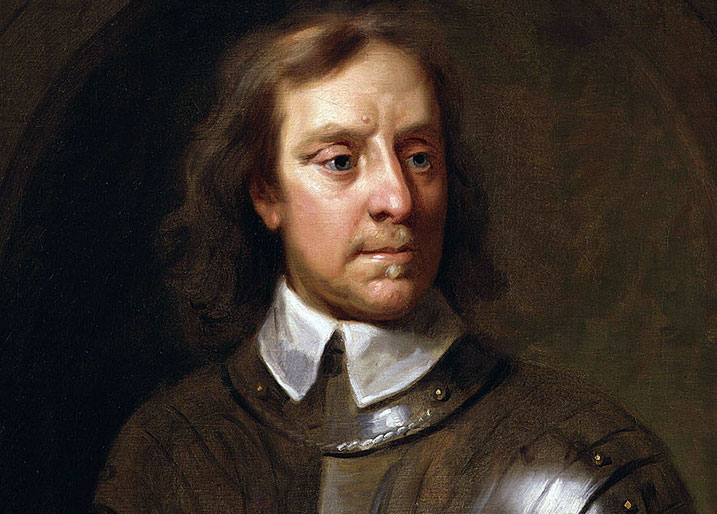 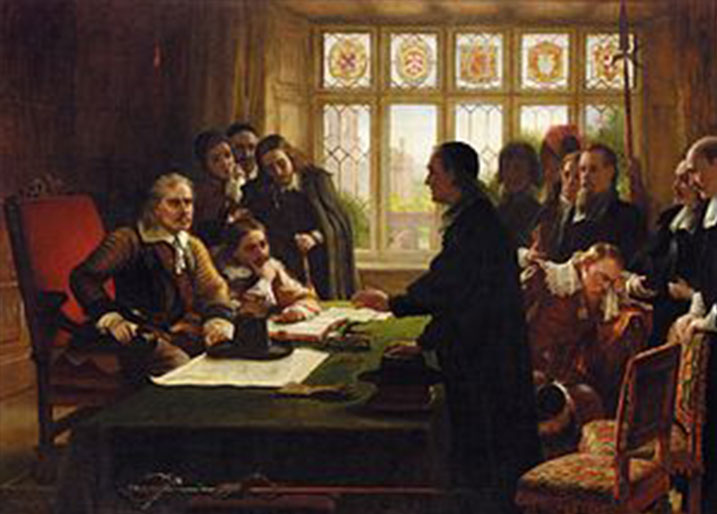 Seeking Aid for the Swiss Protestants

King Charles I called into session a new Parliament in 1639 in order to raise money to fight the Scots, who had declared that the King was head of Great Britain but not the head of the Scottish Church. Parliament refused the funding and Charles’s military effort came to naught. While in session, the new Parliament, mostly Puritans who opposed the King’s antipathy to reforming the church and his Divine Right of Kings high-handedness, made demands on him that he refused to consider. Charles went to war against Parliament and Scotland. In the course of those wars, a little known MP named Oliver Cromwell showed a natural aptitude for the military arts and forged “the New Model Army” into an unbeatable force.

As an unabashed Puritan of broad but intense religious conviction, Cromwell sought out for his cavalry command only officers who were godly Christian men, and he allowed in his army sectaries of many stripes, as long as they would obey orders and fight hard. Cromwell became known as “Old Ironsides,” an epithet of his indomitable will and success. The English Civil Wars lasted from 1642 to 1648, after which King Charles I was captured, tried by Parliament for treason, convicted and beheaded. His son and namesake went into exile in France and Holland leaving England with only the “Rump Parliament,” who ruled till 1653 and declared England a Commonwealth. Cromwell conducted campaigns against Ireland and Scotland, bloodily subduing both to the will of England. 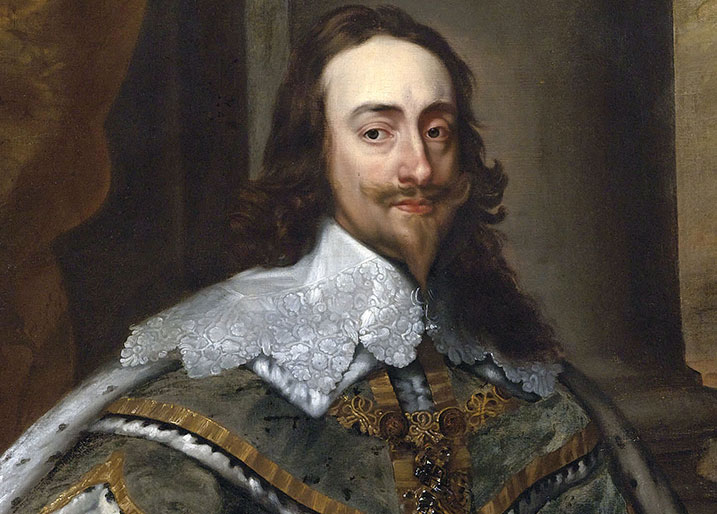 Charles I of England 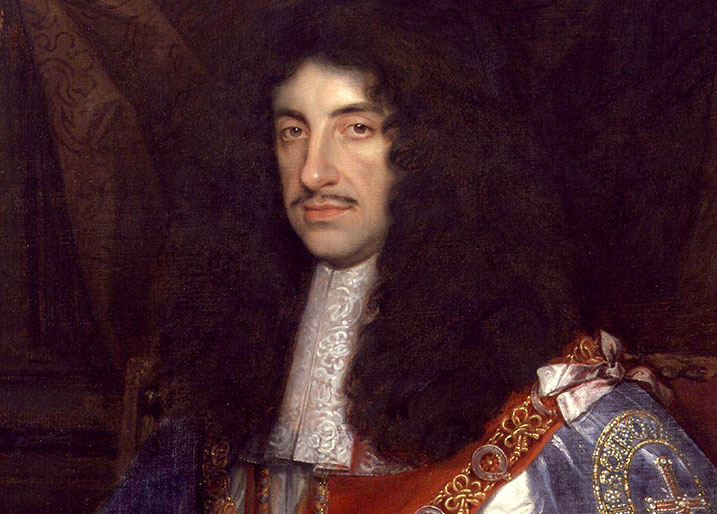 On 16 December, 1653, after being persuaded by the leaders of the army and Parliament to take executive command of the Commonwealth, Oliver Cromwell was sworn in as Lord Protector. He set as his tasks the healing and settling of the nation after more than ten years of constant warfare. Parliament kept the fires hot for radical reform, which Cromwell could not countenance. He dismissed the body and ruled almost like a monarch though he rejected the title when offered to him. Cromwell set out to reform the morals of the nation by setting up means to keep unworthy men out of the pulpits and to enforce biblical law in the shires. In 1658 at the age of fifty nine, the Protector died and received a funeral fit for a king prior to his interment at Westminster Abbey.

In our own day, a palpable hatred of the Christian faith within civil government and the public square seems rife on every hand. This is not a new phenomenon. When Charles II returned to the throne in 1660, he had Cromwell’s corpse exhumed, beheaded, hung in chains and thrown into a pit. Thousands of English and Scottish Puritan ministers were ejected from their pulpits and a formalistic, episcopal Church was reestablished with the King as the head. Resistance to godly government has ever been part of the war and suffering that the prophets and apostles foretold in the Scriptures, but the promise of victory, sometimes shortly and imperfectly realized in the past, will ultimately be completely and perfectly fulfilled in history future. Be faithful where God has placed you on the walls and barricades.