Last week we traveled to New Orleans, Biloxi and Mobile on our Heroes of History Tour. We have posted some images and a brief recap on our blog for you to enjoy. We also wanted to share this beautiful account that Jonathan Bartlett wrote after we spent the 70th Anniversary of D-Day at the WWII Museum in New Orleans. Jonathan makes some great observations and really speaks to the heart of why we host these tours. 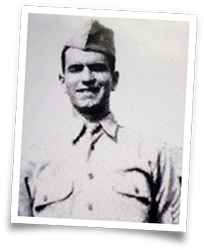 I recently attended the 70th Anniversary D-Day celebration at the National World War II Museum in New Orleans. Besides walking through the museum’s exhibits, meeting reenactors, and participating in the day’s special events, I had the opportunity to visit with actual veterans of D-Day.

As the celebration was winding down, I was able to visit with former Staff Sergeant Lampton “LC” Terrell, now 91 years old. Mr. Terrell, part of the 1st Engineer Special Brigade, hit Utah Beach on D-Day at the head of 36 men. He was the first man off the ramp in the second wave of infantry. I had heard some of his story earlier when he shared it in the D-Day veterans’ panel discussion.

After shaking hands with Mr. Terrell and asking his wife to take a picture of us together, I asked him a question. “Looking back over your life,” I said, “Are there any life lessons you think a young man like me should know?” Mr. Terrell thought for a moment, then looked at me and answered resolutely. “Don’t quit,” he said. “When you feel ready to give up, or opportunities seem to have slipped from your grasp, or you are old and tempted to retire from an active, purposeful life, don’t quit.” That little piece of wisdom, Mr. Terrell said, has been what he has tried to keep in mind his whole life.

“There is another lesson young men need to learn,” Mr. Terrell continued. “Too many get married and then still act like one of the boys. They prefer to work all day, spend the evening with their guy friends, and leave their wife home with the children even when the wife may be having a difficult time…. That’s not the way it’s supposed to work. Men need to realize that once they’re married, they’re no longer one of the boys. Their responsibility is to their wives. They should find things that their wives enjoy doing with them.” That’s what Mr. Terrell did: he found that his wife enjoyed fly fishing, and they did it together. 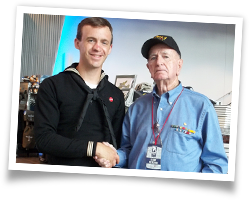 Being nearly time to part ways, there was one more question I wanted to ask. “Do you feel you are ready to go? I mean, seeing as you’re pretty far up in years, when you’re time is up, do you know that you’re ready to go?” In his calm, grandfatherly voice, Mr. Terrell looked at me and said, “Both my wife and I are Christians, and yes, when it’s my time, I’m ready to go.” Remembering what Mr. Potter had told our tour group about his visit to Pearl Harbor, and how all the veterans Mr. Potter met at Pearl Harbor refused to acknowledge the Lord in the preservation of their lives, I followed up. “What do you think about your own survival of D-Day? I know lots of veterans think it was just luck.” Mr. Terrell said he doesn’t believe in luck, and he knows that it was God who preserved his life. God intended it as a blessing. We must remember the fallen — they are the real heroes — but God is in control.

I shook Mr. Terrell’s hand one last time, and he and his wife walked away, leaving me to think about what I had just heard. In my mind, Mr. Terrell represents what it means to be a true Christian man: courageous in battle, humble in service to others, and willing to acknowledge and live in light of God’s absolute sovereignty over our lives.

When I grow up, I want to be like Mr. Terrell.

Read Mr. Terrell’s story and listen to him recount how he led his men into battle and silenced a machine gun nest.