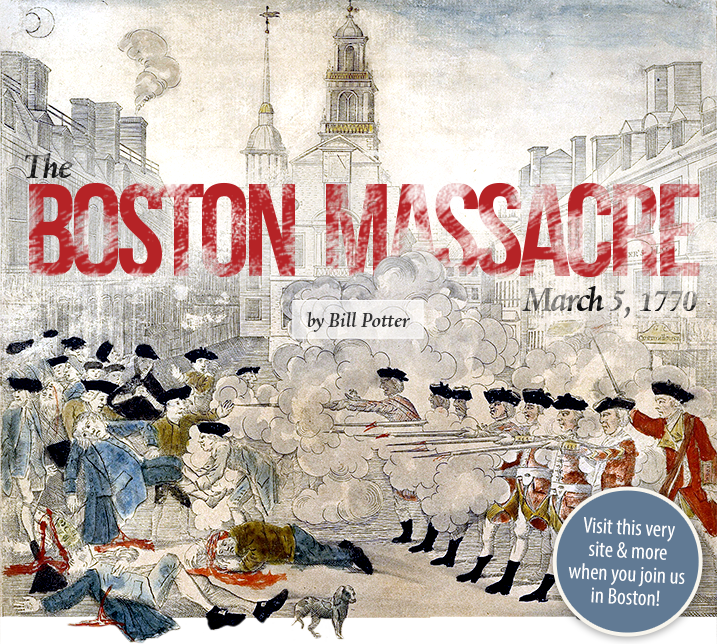 Unhappy Boston! see thy Sons deplore,
Thy hallow’d Walks besmear’d with guiltless Gore:
While faithless P—n and his savage Bands,
With murd’rous Rancour stretch their bloody Hands;
Like fierce Barbarians grinning o’er their Prey,
Approve the Carnage and enjoy the Day.

—Excerpt from above image engraved, printed
and published by Paul Revere, 1770 Boston

ew words convey a more evocative negative image than “massacre.” We know how it makes us feel in our own day — it has always been thus. When American Indians won a battle against the cavalry or settlers, it was always deemed a massacre. When the troops won, it was a “hard-fought victory.” The marketing of a battle by the government or the mass media manipulates the outcome on the home front and often demonizes the enemy. On March 5, 1770, a street riot in which British soldiers defended themselves with deadly force was instantly trumpeted throughout the colonies as “The Boston Massacre,” a name the event still retains. The “patriots” won the propaganda battle.

The Old Massachusetts State House then and now —
We will visit a memorial to the conflict here in front of the Old State House as part of our Thanksgiving with the Pilgrims Tour in Boston and Plymouth November 14-18!

The mere presence of Redcoated soldiers in the city continued to provide insult and provocation to the people of Boston, especially the element agitating for their removal and a restoration of the American rights of self-taxation and non-interference in trade. On a cold night filled with ice and snow, numbers of Bostonian men young and old were in the streets, some responding to a fire alarm, others just throwing snowballs and looking for trouble. An English sentinel came under attack and “called for backup.” An unruly gang began to pelt both him and his comrades with ice and snow, and some claimed, rocks and brickbats.

The soldiers backed off until cornered and then fired their muskets. The subsequent blood in the snow created a sensation across the colonies, and five years later would again be brought up as a reason for separation from England. The site today is a mere plaque on a wall along the Freedom Trail in Boston.

Inside and out at the Old Massachusetts State House — This and much more as part of our Thanksgiving with the Pilgrims Tour in Boston and Plymouth November 14-18!

Join us as we visit the site of the Boston massacre and imagine the tragic incidents of that night long ago that still lives in the memories of a nation, even as it stimulated our ancestors to further resistance and the creation of a Republic. By the way, John Adams defended the soldiers in a Boston courtroom and won the case against the mob. Street riot, unprovoked attack, self-defense, massacre?