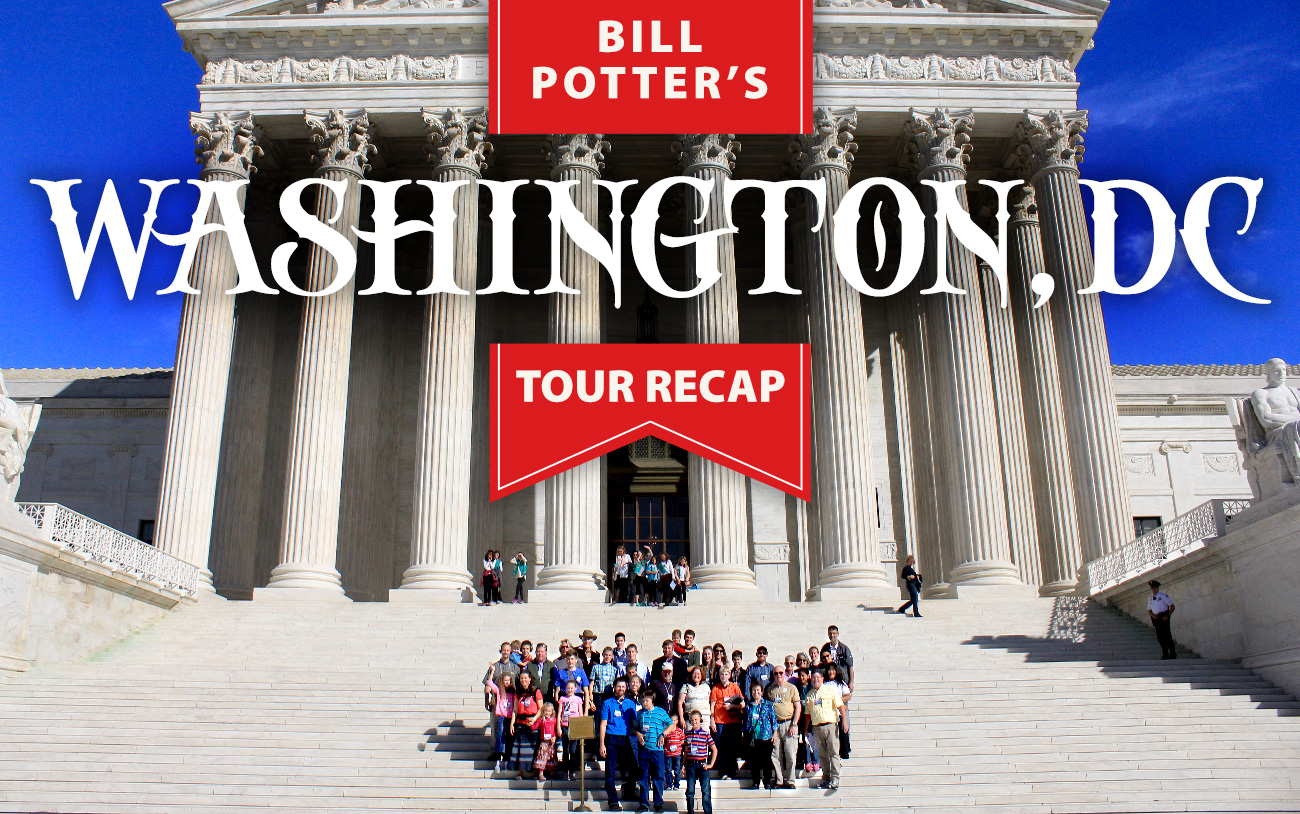 The Landmark Events tour of our nation’s capital is the most diverse and complex of all our excursions. It also involves the most walking. It covers, in one form or another, the entire history of the United States from earliest settlements (in paintings at the Capitol Rotunda) to modern times. Our teaching encounters all the nuances of our national history—commitment, compromise, conflict, and consensus.

Tuesday morning we began at Mt. Vernon, the magnificent site of the plantation of our first President, George Washington. We learned of his importance and true greatness as the one man who could lead colonial America to independence. We discussed some of his weaknesses and his attempts to bring those under a stern self-discipline. We discussed the Christian faith of Washington and the attempts to enlist him as a deist wallowing in the humanism of the Enlightenment. His passion for farming and taking dominion over the land was evident to all in the re-creation of his home and properties. A visit to Mt. Vernon is only the preliminary to returning there again someday to learn and see more of the man Providence chose to unite Americans under the Constitution.

The great architectural homage to George Washington soars into the sky over the city named after him. Unlike the neo-classical buildings to the other memorialized Presidents, the Washington Monument took the form of an obelisk, at the peak of which is inscribed Laus Deo — Praise God. With the elevator closed for repair, we could only gaze up, but could see it from almost everywhere we travelled in the city.

We rode in our comfortable coach from the Washington Monument to the Jefferson Memorial where we climbed to the portico to read the inscriptions delineating some of his ideas that transformed America. Col. John Eidsmoe spoke to us of Thomas Jefferson’s complex character and familiarity with the Christian faith. While his acceptance of Christ is somewhat doubtful, his belief in Providence and biblical ethics are obvious, contrary to much academic opinion today. Jefferson’s towering intellect and ability to articulate the ideas behind independence still amaze the world.

Most visitors to Washington, D.C. skip the modest statue in memorial to the Founding Father George Mason. Author in large measure of the Fairfax Resolves and the Virginia Declaration of Rights, Mason was perhaps the heaviest hitter at the Constitutional Convention. Because of the absence of a Bill of Rights, he fought against ratification but deserves much of the credit for their later inclusion. A devoted husband and father, a voracious reader and unbeatable debater, Mason is a man who deserves greater acclaim than he is used to receiving.

Tuesday evening some of us gathered for some discussion of the day’s events and other issues that arose. Bill Potter and Col. Eidsmoe answered questions on law and American history.

Wednesday greeted us with our first Metro experience, Washington, D.C.’s commuter rail system, which everyone survived and some really enjoyed. We began the day at the Newseum, a state-of-the-art, interactive and entertaining museum of how Americans get their news, now and in the distant past. Col. Eidsmoe gave us a delightful excurse through the First Amendment — a place where he makes his living. We then dispersed to explore six floors of displays, information, artifacts and news. From the 4D theater and the Berlin Wall, to the catwalk with Bernie Beal, everyone watched, interacted and enjoyed the history of America in black and white and living color as it came to Americans courtesy of the First Amendment.

A short walk brought us to the National Archives where we saw the supremely protected Declaration of Independence as well as the United States Constitution and other important documents. With Benjamin Franklin Gates (aka Nickolas Cage) nowhere in sight, we made the long walk to the United States Capitol where historian Bernie Beal gave us the cook’s tour of the various statuary halls, and discussed the importance of the various historical figures represented there, along with a lecture concerning some of the historical development of the Capitol itself.

We made the trek to the Supreme Court, a massive structure that in many ways symbolizes the architecture of Washington and the legal heritage of our nation. Dr. Eidsmoe held forth on how the court is structured and of the influence of Chief Justice John Marshall, whose court established many precedents in the early 1800s.

Across the street we entered the Library of Congress, the repository of more than 35 million books and many millions more of magazines, newspapers and miscellaneous documents. Bill and Bernie talked about the symbolism of the interior artwork and sculpture and the importance of the Gutenburg Bible on display. We viewed Thomas Jefferson’ library enclosed in beautiful glass cases in a remarkable special display.

Wednesday evening we again met to discuss aspects of the day’s adventures and explore other historical topics of interest to our group with Col. Eidsmoe and Bill Potter.

Thursday we boarded our coach and drove through the beautiful western Maryland countryside as Bill summarized the Civil War narrative up to September, 1862. We arrived at the Battlefield of Antietam and after a brief visit to the visitor’ss center, Bill talked to us about the early morning engagement of the two veteran armies arrayed across the verdant fields of the German farmers. We looked in on the Dunkard Church and then walked up the Hagerstown turnpike to the Miller cornfield. We heard of the sacrifices of the Texas Brigade on that part of the field and the stories of the 1st Texas. We rode to the Sunken Road and learned of General John B. Gordon and his wounding in the road cut. Our final stop and lunch overlooked “Burnside’s Bridge” where two Georgia Regiments saved General Lee’s right flank for hours against an entire Corps of the Union Army.

From Antietam to the Lincoln Memorial we drove for a brief look at the iconic looming statue of President Lincoln. Antietam had given occasion for the Emancipation Proclamation and the memorial to the later martyred President reminded us of the great sacrifices that were made in the Civil War.

The Arlington National Military Cemetery greeted us at the last stop of the day. We climbed the hill to Arlington House, the former home of General Robert E. Lee, and the bird’s eye view of the Capitol that that location affords like no other. To the Tomb and ceremony of the Unknown Soldier presided over by the Old Guard — always impressive and somber.

The evening’s gathering was the occasion to see the feature film Conspirator, concerning the trial of the accused accessory to the murder of President Lincoln, Mary Surratt.

Friday, our final day of the tour, began with a Metro ride to the Spy Museum, a most informative and entertaining museum of all things espionage. From there we walked to the series of War Memorials that grace the Washington Mall area — World War II, Vietnam and Korea. Bill and John talked about all three wars — their causes and meaning. The rains came down in torrents at the Korean Memorial the second tour, cutting a bit short our visit to the site. From there, most of the group toured various Smithsonian Museums. We talked briefly about how to view the artifacts and displays from a biblical perspective, with the realization that those who create them do so from some religious worldview, usually Darwinian and evolutionary.

Friday evening was given over to feasting and giving thanks at the historic toll house, Mrs. K’s Toll House Restaurant. We testified of God’s goodness and providential creation and care of our country as well as the abandonment of the founding principles in our day. Kevin sought to encourage all of us to remember God’s mighty hand and the certainty of victory for his people in history.

Hope to see you next year!

Additional Photos from the Tour 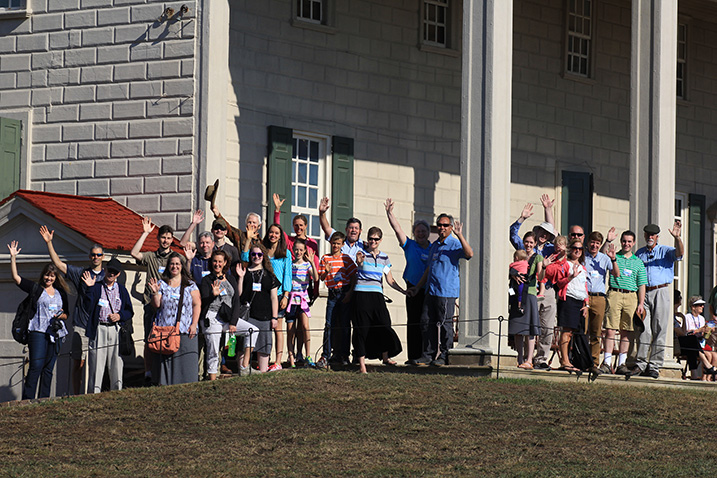 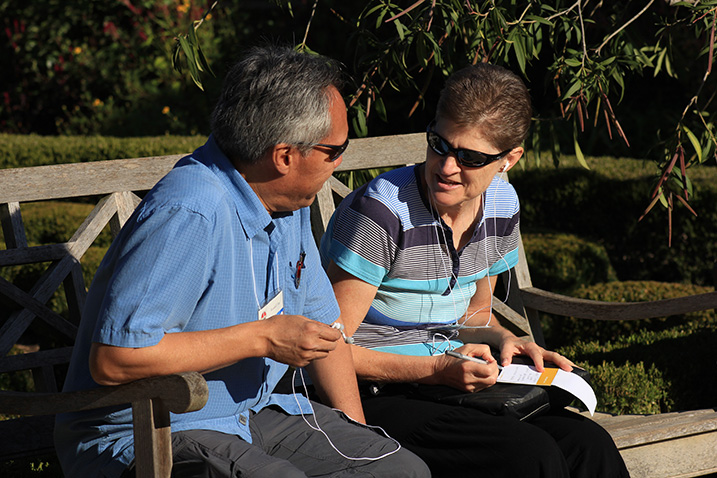 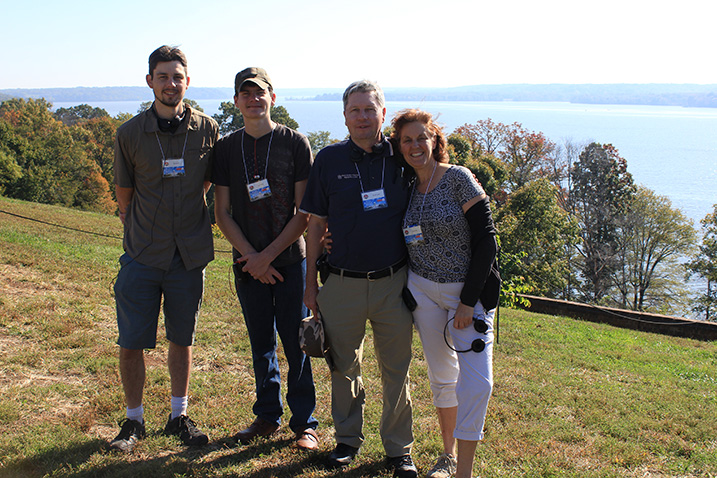 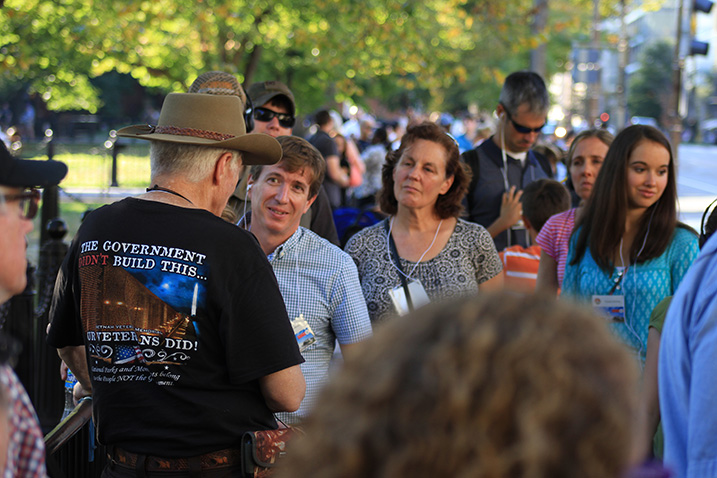 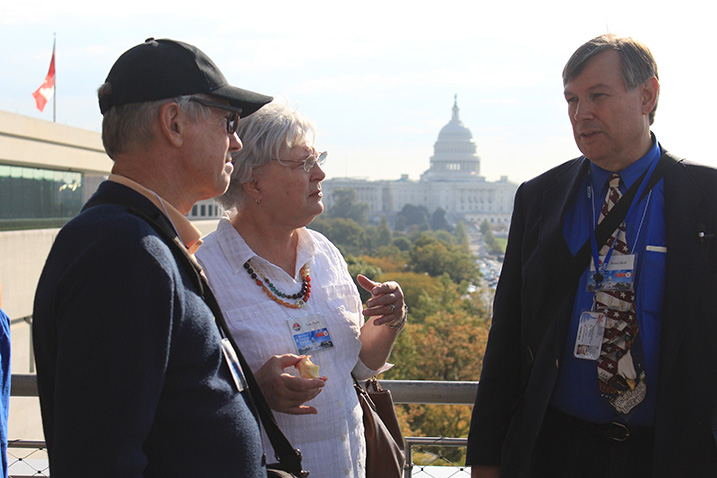 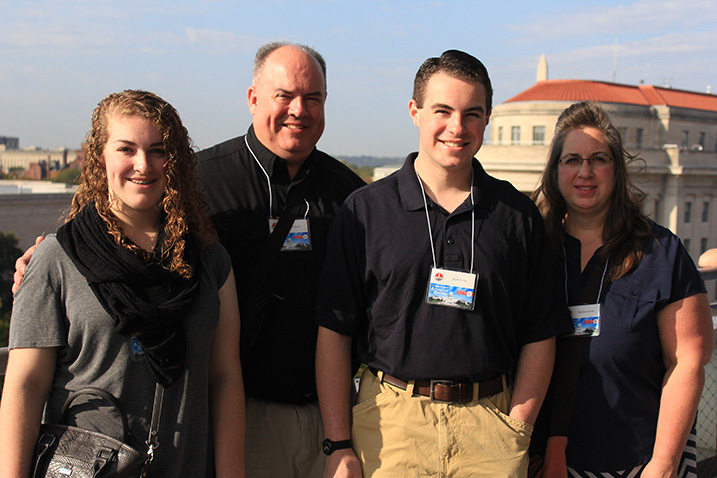 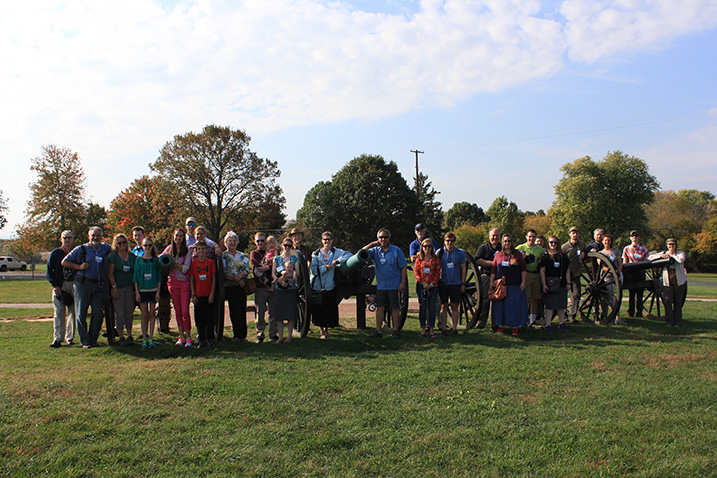 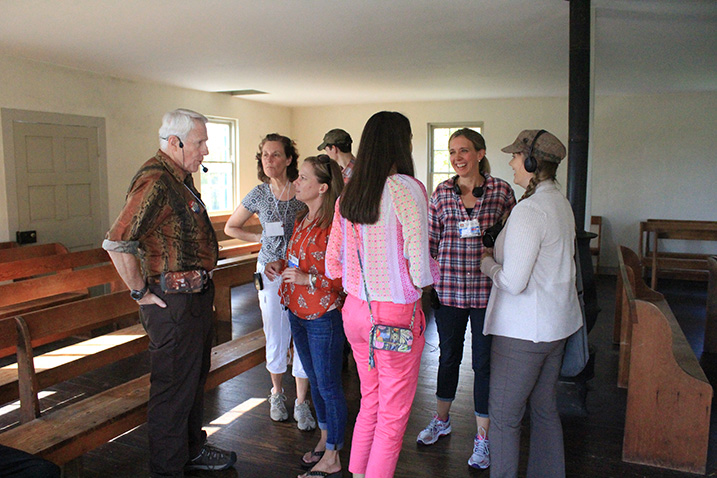 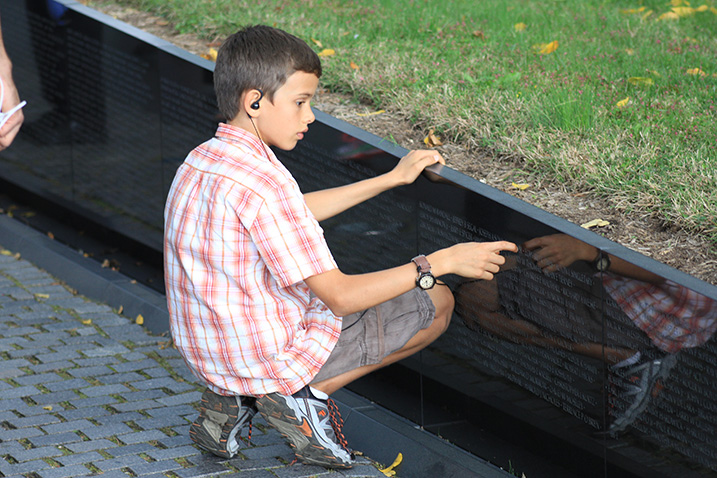 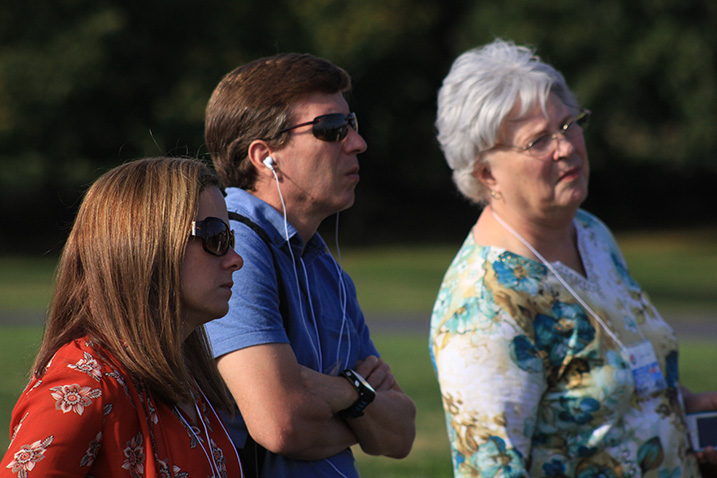 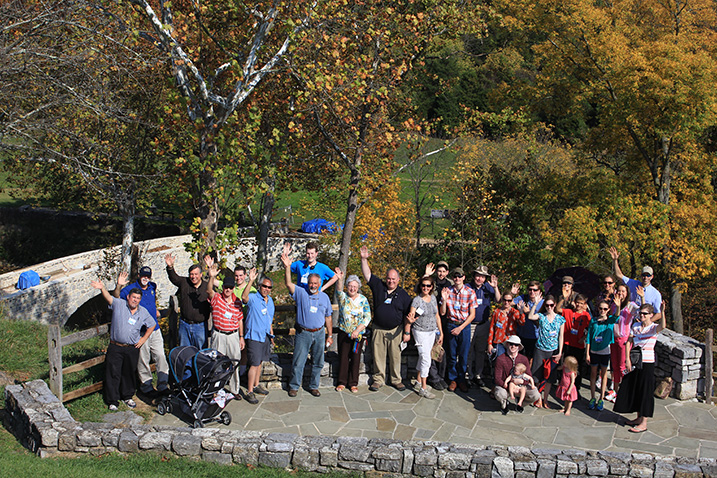 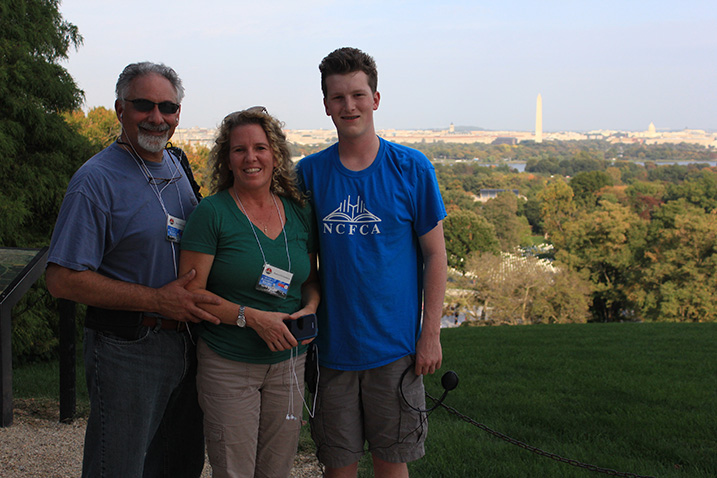 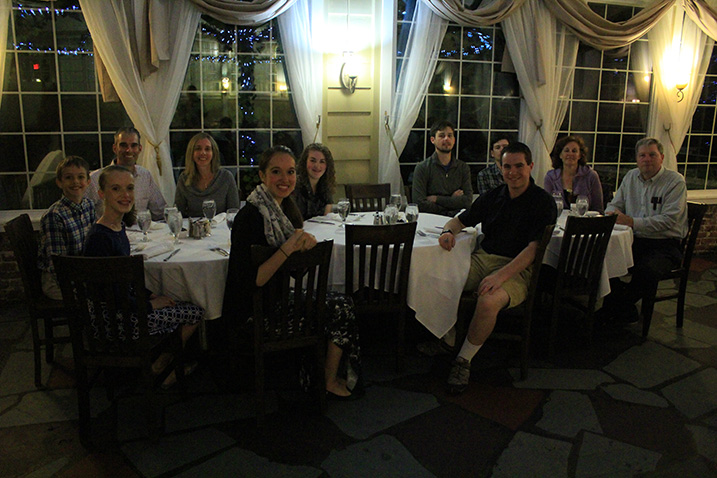 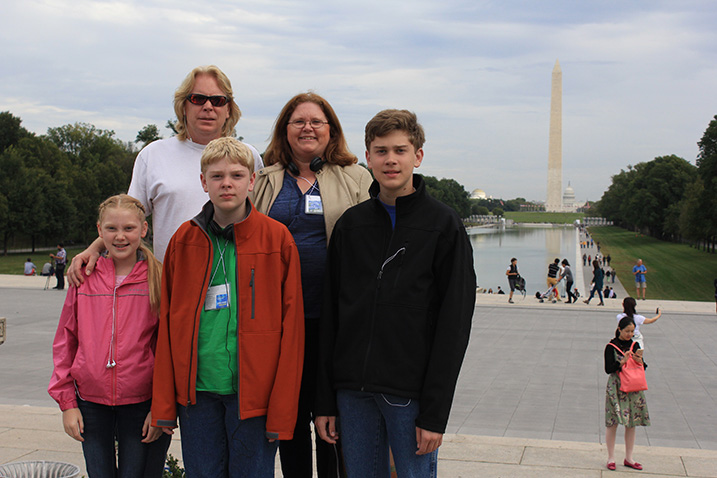 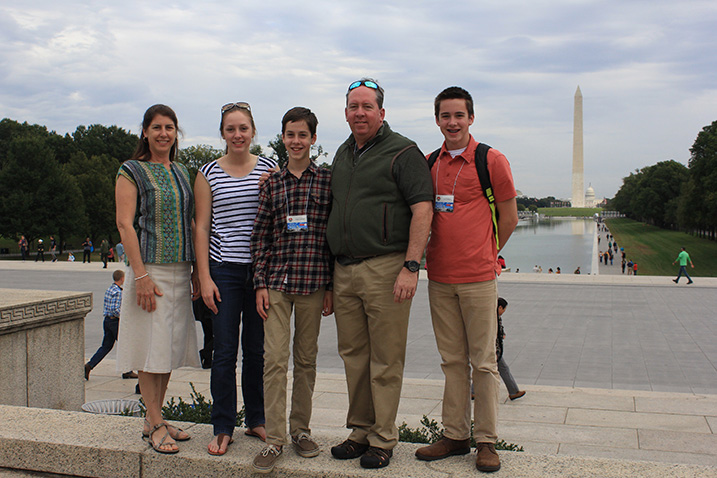 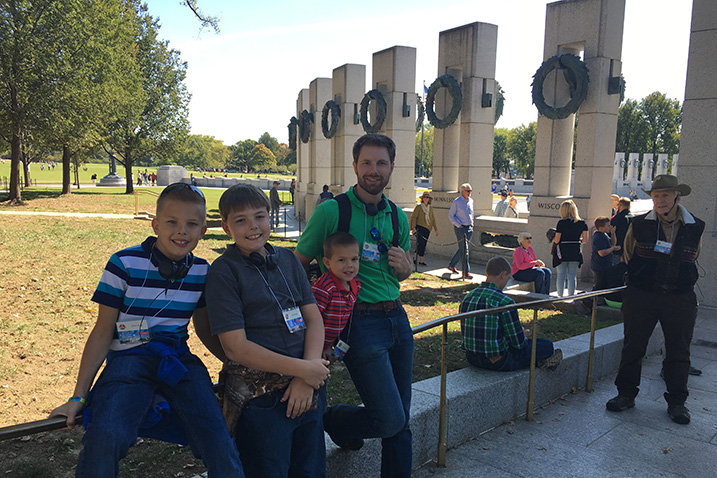 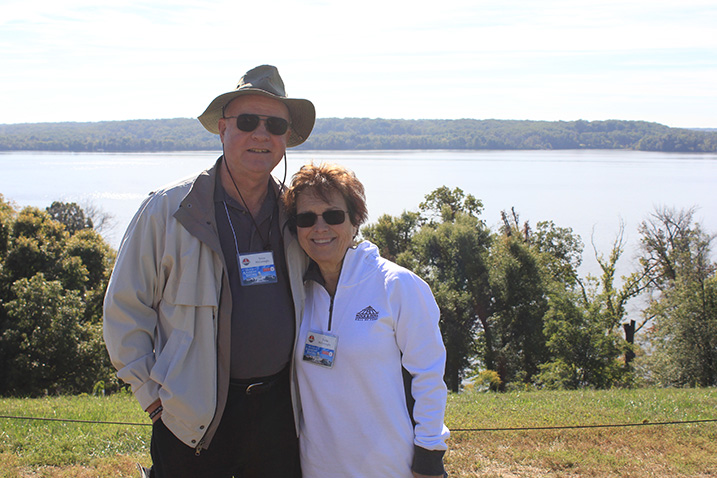 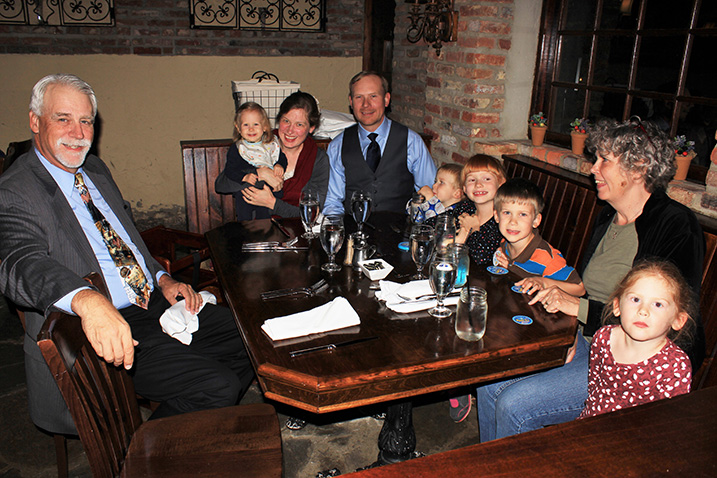 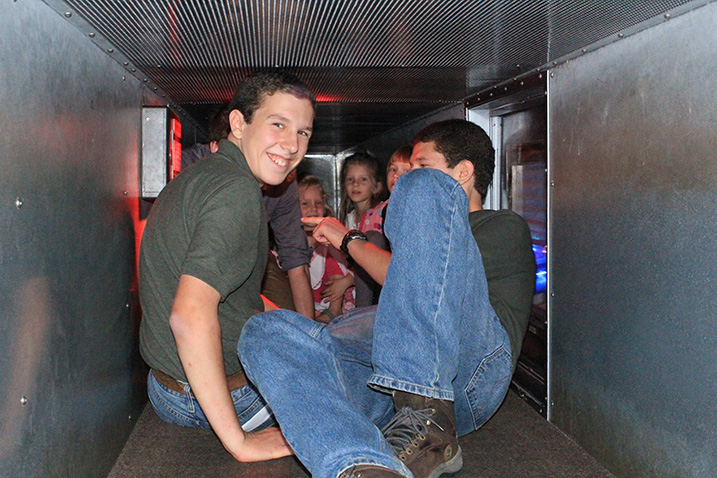 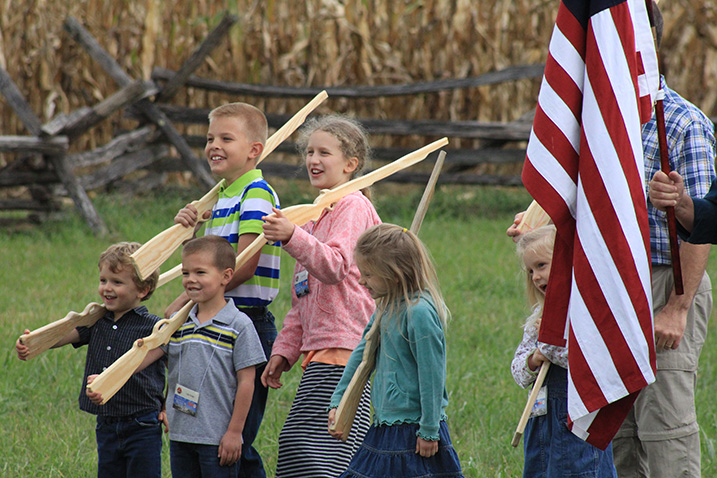 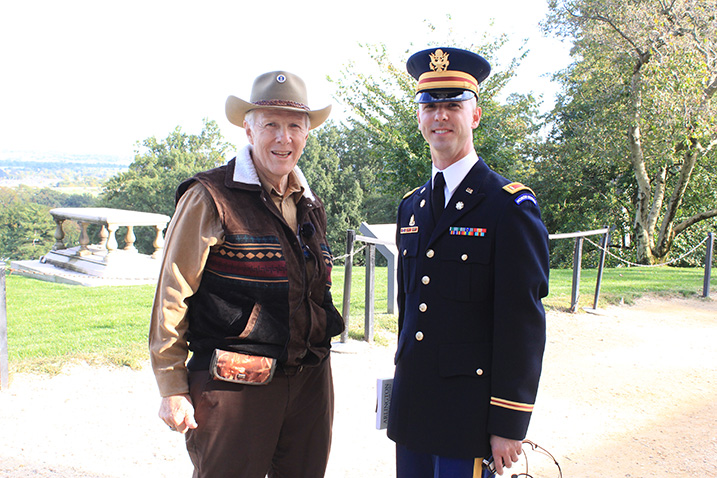 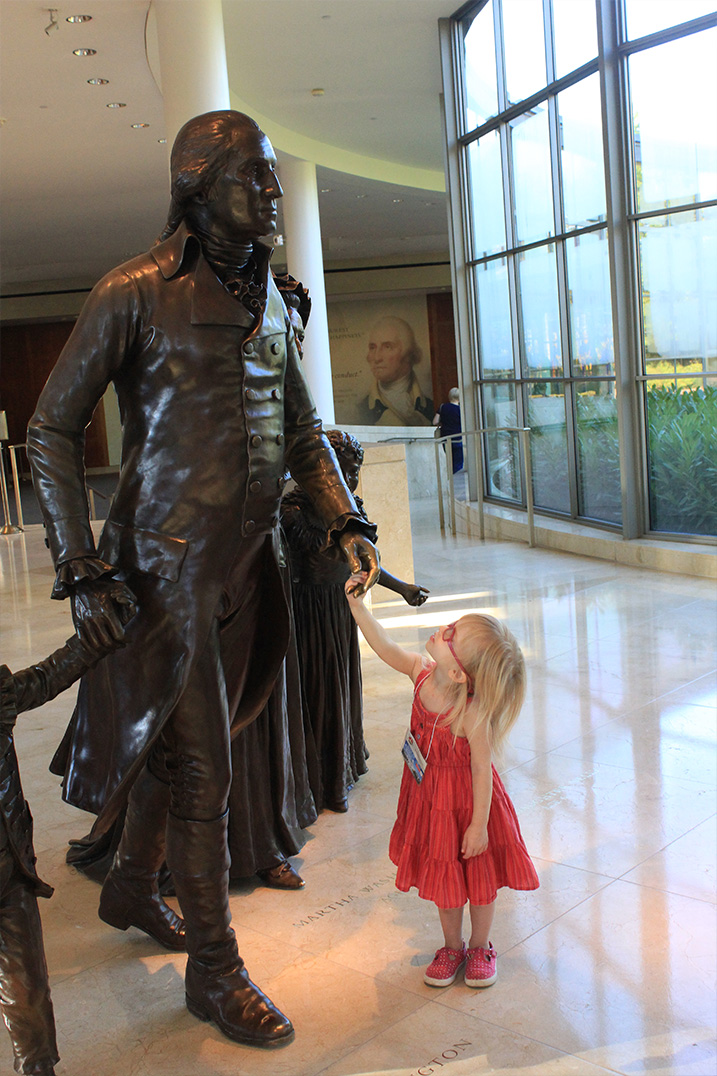 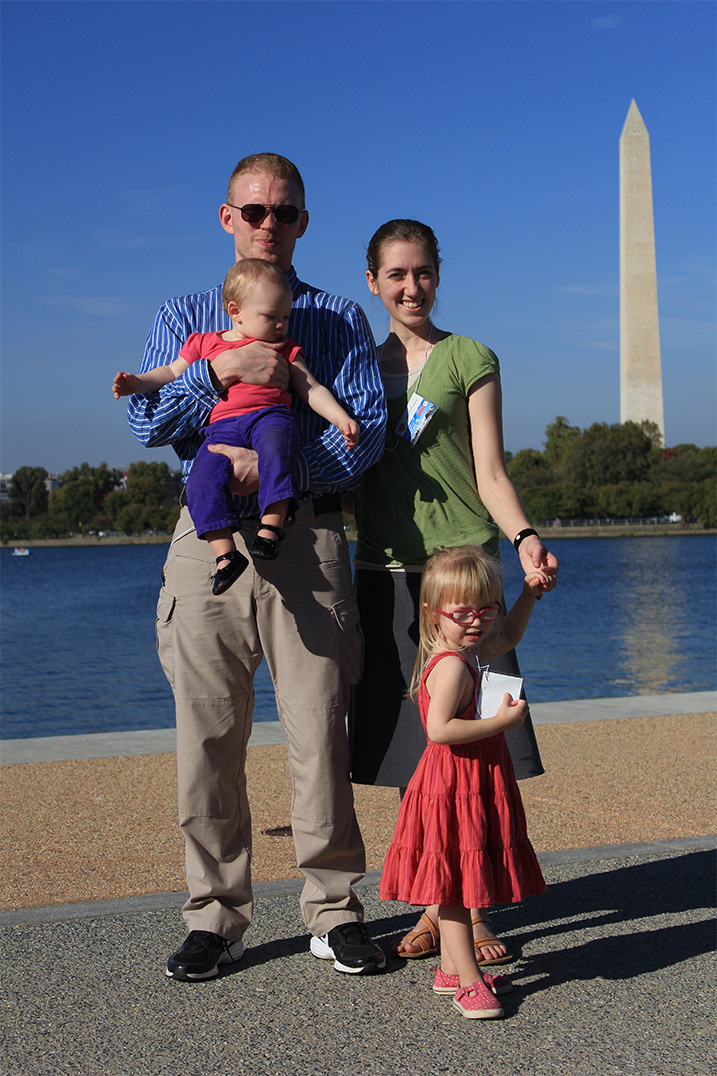 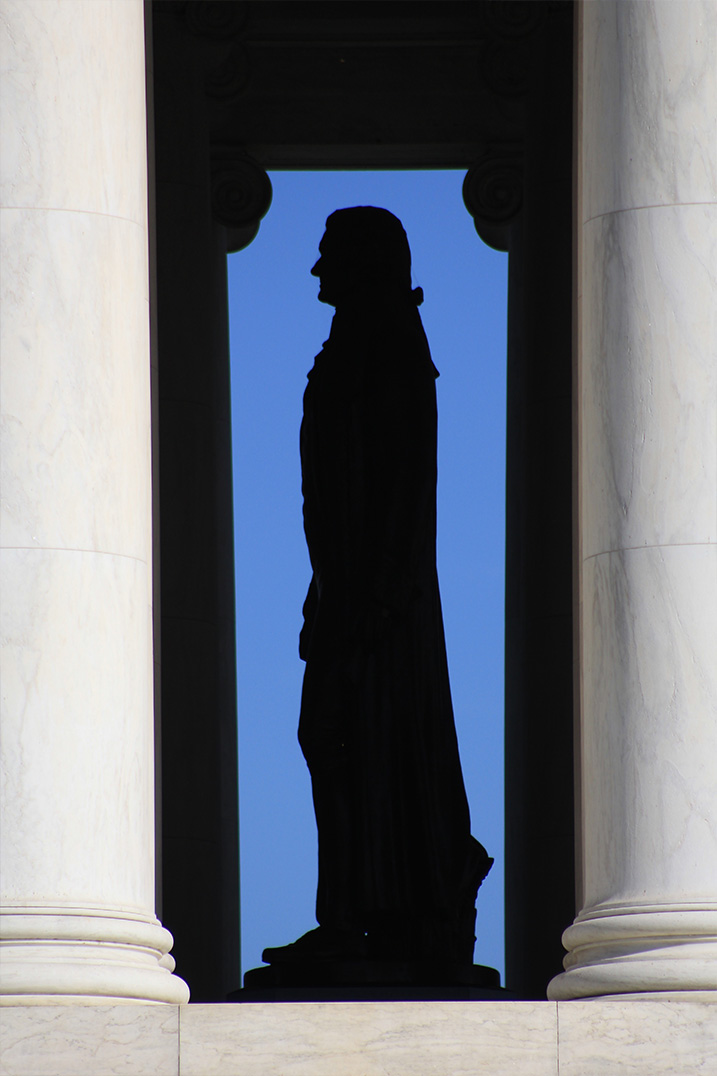 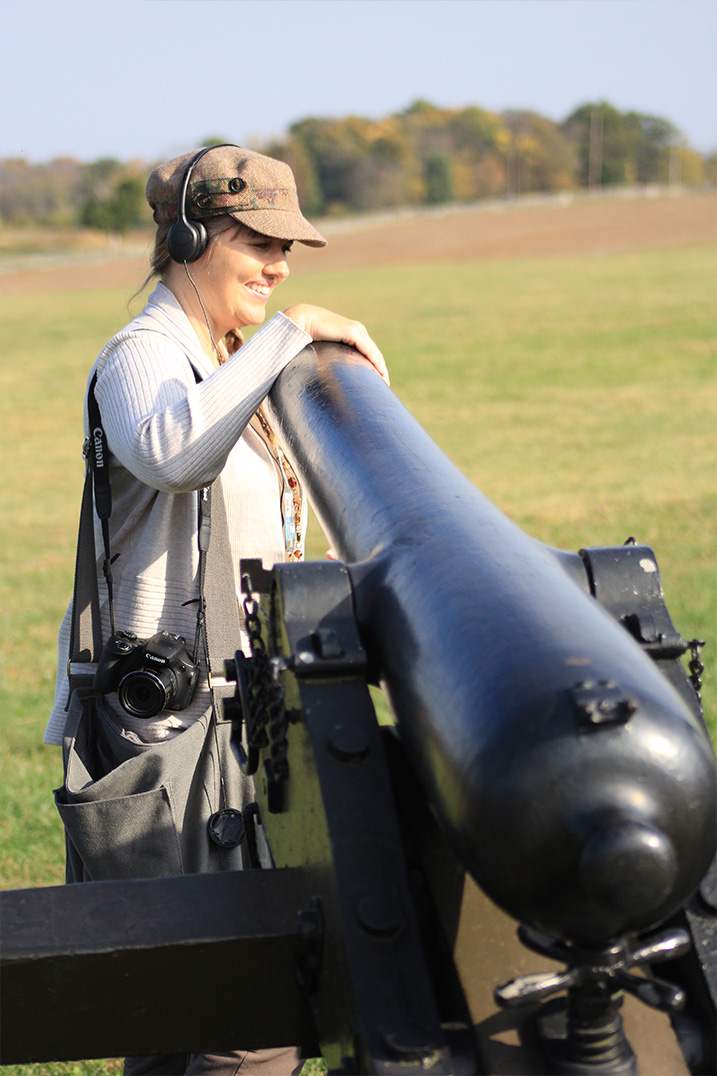 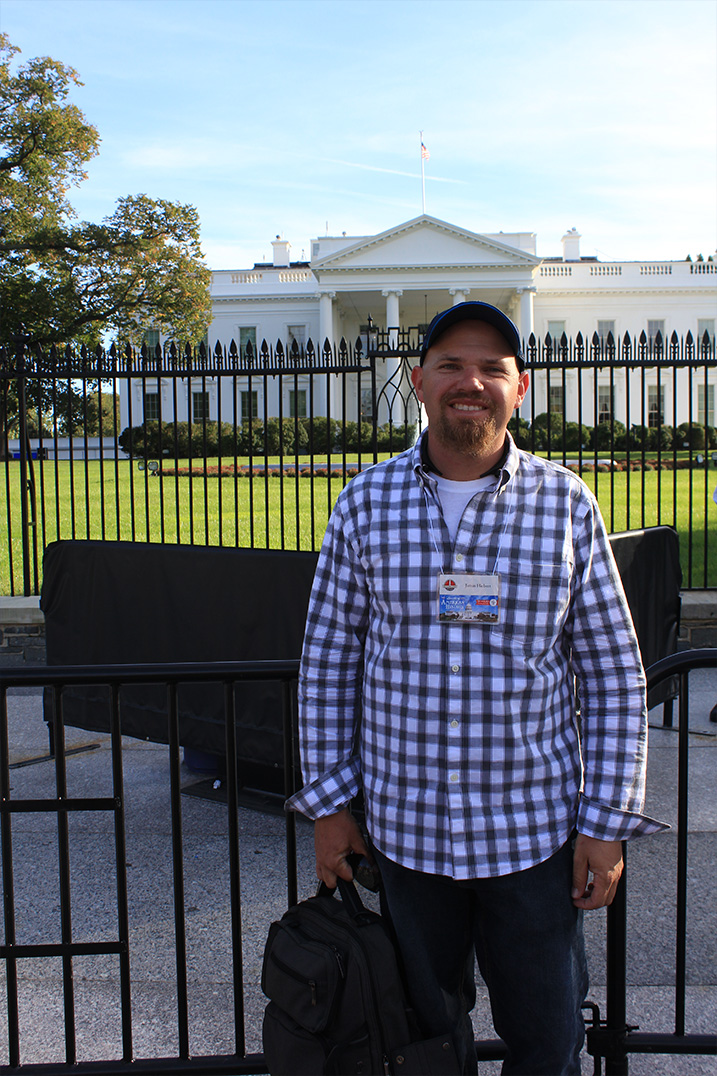 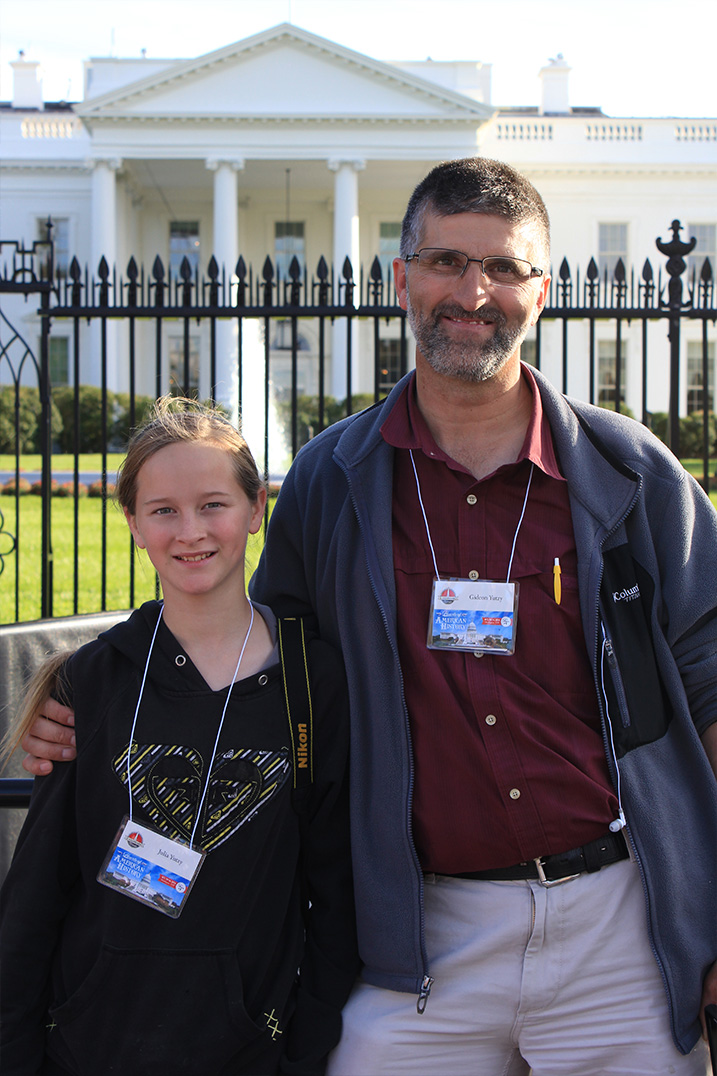 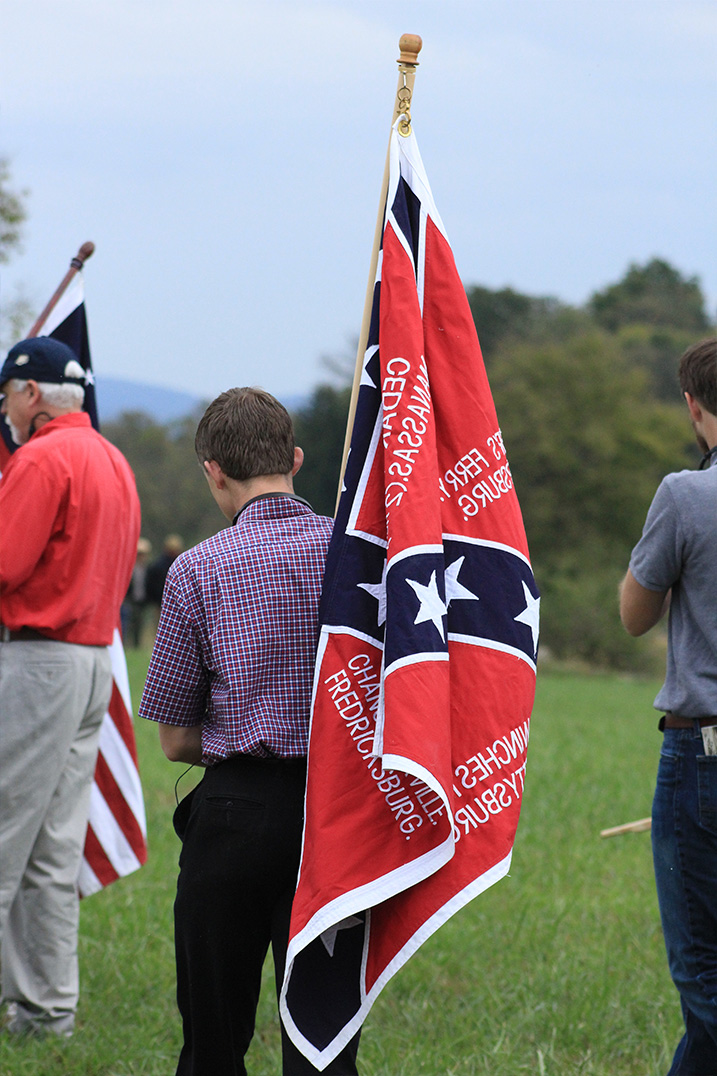