What a great adventure with like-minded families! We learned so much about Florida’s history and appreciated the free time between sessions to explore the area. Mr. Potter is terrific at bringing history to life through a distinctly Christian filter.” —Tim A.

lorida has not always been a welcoming tourist attraction. The history of the state is fraught with war, massacres, pirate raids, invasions, and deportation—providential hardships that eventually faded to the past in favor of beaches, football, retirement villas, Walt Disney, and space rockets, not to mention citrus groves and golf courses. We learned about the hard times.

St. Augustine is the oldest European-founded city in North America. The governor of Puerto Rico was the first to claim the area for Spain—a stalwart explorer named Ponce de León, who called the area La Florida in 1513. We examined the story of the fabled fountain of youth which has given its name to a lovely historical park along the bay. Historian Bill Potter mused about mankind’s quest to find alternatives to mortality and salvation apart from the Bible, whether Ponce sought such a course or not. We witnessed a re-enactor explain and fire a matchlock gun and a Spanish artillery crew set off a cannon like the ones that defended the city in less peaceful times. We visited a re-creation of the first Christian chapel erected in Florida by Franciscan missionaries in the 16th Century. As an entertaining touch, pea-fowl preened along walls next to signs that forbade sitting on them, and they strutted between two heavy guns that once blasted the British from aboard the fabled USS Constitution (now in Boston Harbor).

The reconstructed Fort Caroline near Jacksonville provided a picturesque setting for our next stop. Originally constructed by French Huguenots, the site, or one close by, became the first attempted permanent colony along the eastern coast of Florida. Several hundred settlers of Protestant conviction were sent there by the Admiral of France, Gaspard de Coligny in 1564 to establish a base of operation for trade with and evangelization of, the native tribes, and to harvest whatever wealth and resources were available. Led by René de Loudonnière, the infant colony suffered lack of food and proper discipline, almost collapsing on its own. A relief expedition came to aid the failing colonists and secure the place from possible Spanish depredations. The Catholic King of Spain also sent an expedition, under a hard and uncompromising soldier, Pedro Menéndez de Avilés, to deal with what he considered enemy intruders on Spanish-claimed land. The ruthless Menendez wiped out the French colony and established St. Augustine as the new base of Spanish operations in that part of Florida. We fought a brief re-enactment, with the French running away, though Mr. Potter actually escaped to the woods to teach another day. Providence is often a great mystery.

On the ramparts of the reconstructed Huguenot Fort Caroline near Jacksonville

Our final destination of the day found our expedition among the distaff pirates of the Pirate Museum of St. Augustine. A mixture of humor, entertainment, and solid information, we viewed and learned about the singular pirate artifacts of the museum. They include such interesting items as one of the two known authentic pirate flags in existence, the Bible of Captain Kidd, and the talking head of Blackbeard. We learned about the differences between privateering and piracy, often a very blurred line, and details of the lives of some of the more prominent pirates of history. Most died violently, having spent their lives violating the law of God in all of its aspects, and being tracked down by the British, French, and Spanish navies. The final room displayed the prominent role pirate stories have played in Hollywood movies—a charming bunch of rogues defined more by the stereotypes created by Long John Silver and Walt Disney, than by careful historical and biblical analysis. We were reminded not to call evil good or good evil.

Our evening gathering, where we killed the fatted pizza, and schmoozed with our new friends, ended with a talk by Mr. Potter on the role of Andrew Jackson and the Seminoles of Florida, both subjects of controversy, intrigue, violence, and mystery.

Saturday morning we adjourned at the Castillo de San Marcos, the oldest masonry fort in the United States. After witnessing the burning by pirates and English soldiers of nine previous wooden forts, trying to protect the city, the Queen of Spain authorized the building of the state of the art bastion, which has become the symbol of the City of St. Augustine. It withstood two sieges by British Americans and housed many prisoners over the centuries. Famous chiefs, signers of the Declaration of Independence and common criminals have stared at the four walls of the dungeon. It changed national possession six times in its history, almost always by treaty. Four centuries of people have come and gone in St. Augustine but the Castillo still proudly stands there, flying the colors of Burgundy, the royal house of Spain.

Hello from atop the walls of the magnificent Castillo de San Marcos!

We concluded our tour at the excellent reenactment of the Battle of Olustee. Though it rained at the beginning of the day, the weather totally cleared in time for the battle and we were treated to a spectacular demonstration of artillery bombardment, infantry tactics, and cavalry who couldn’t shoot straight. A premier reenactment and the first of the season, it is never disappointing and they outdid themselves once again. The sutlers were actively relieving tourists of Yankee greenbacks, the churches were selling good hot food, and the Re-enactors Missions were handing out Gospel tracts and earplugs. Bill gave a brief summary of the battle at the monument commemorating the men who fought there.

Mustering the troops and commemorating the Battle of Olustee

This tour marked the beginning of the fourth year of Landmark Events and we appreciate all who took the time to attend and hear of the Providence of God in Florida. We trust that the teaching has given you a fuller measure of the Grace of God and his control of our past as he forged the nation in which we live. Whether you joined us in spirit or in person, we look forward to seeing you on a future Landmark Events Tour where we walk the ground where the mighty hand of God directed the affairs of men.

More Images from the Tour! 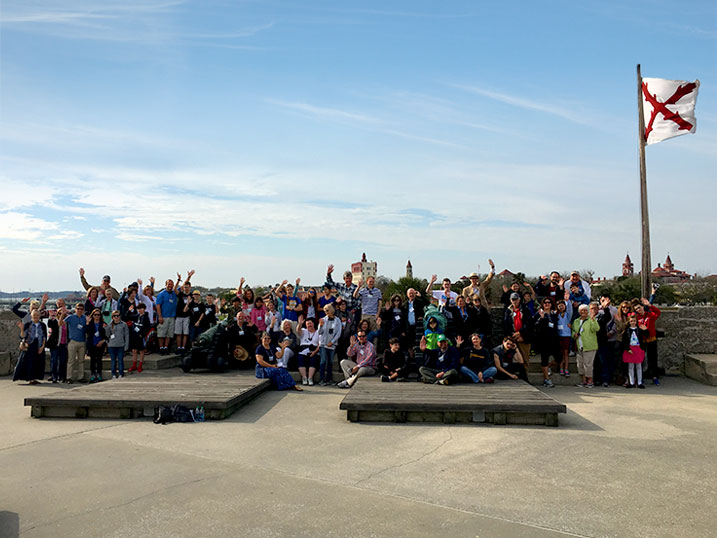 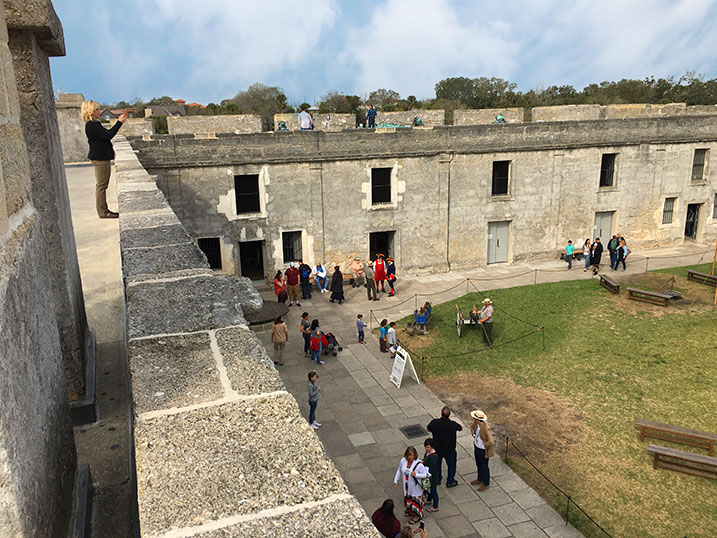 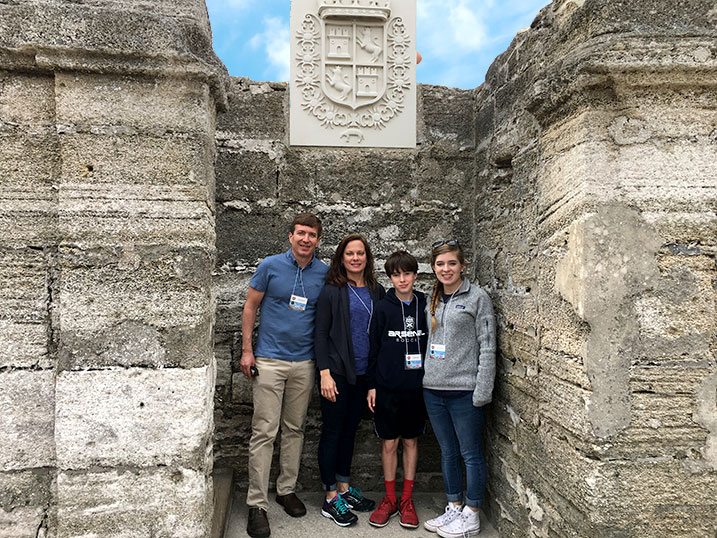 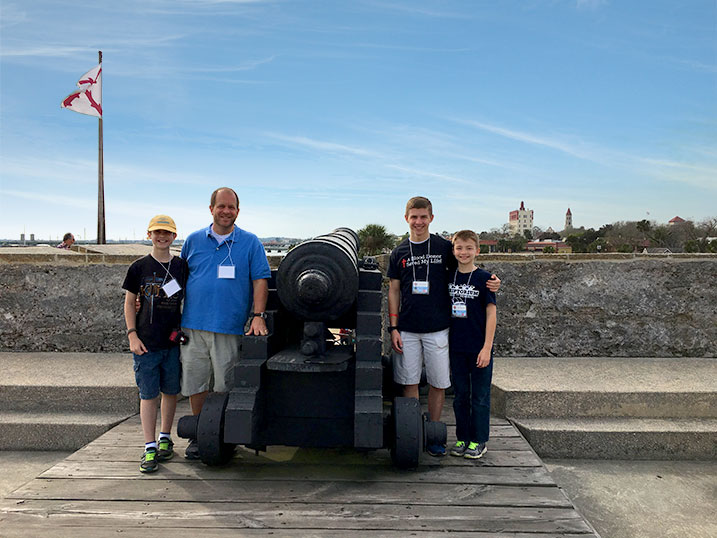 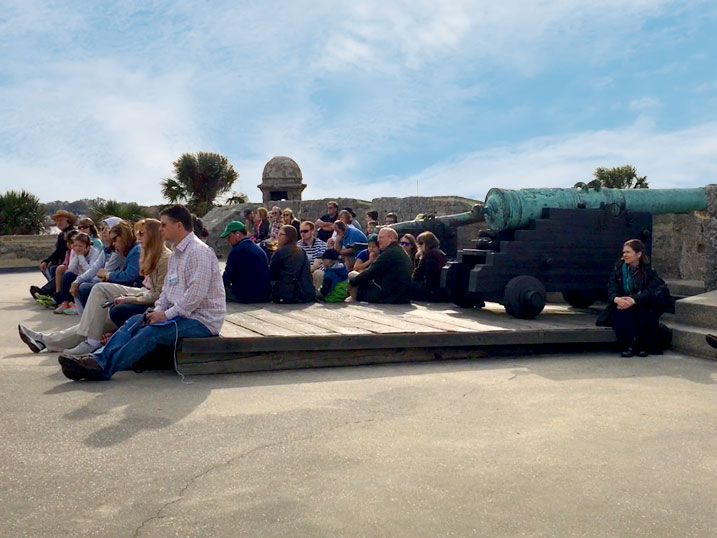 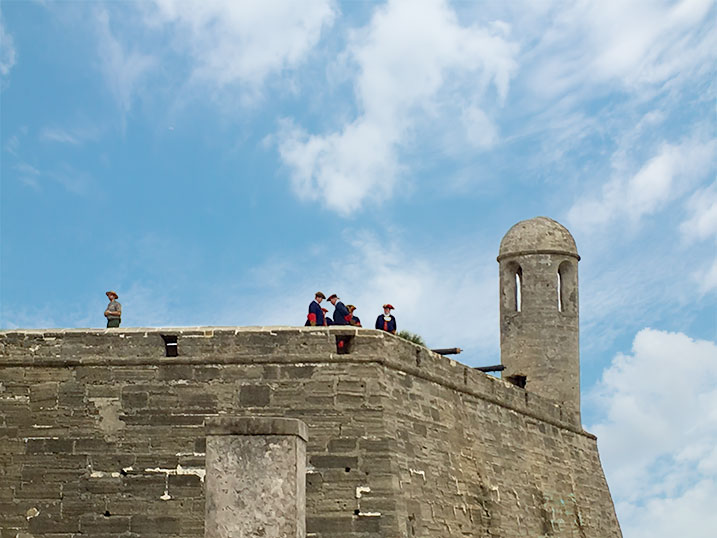 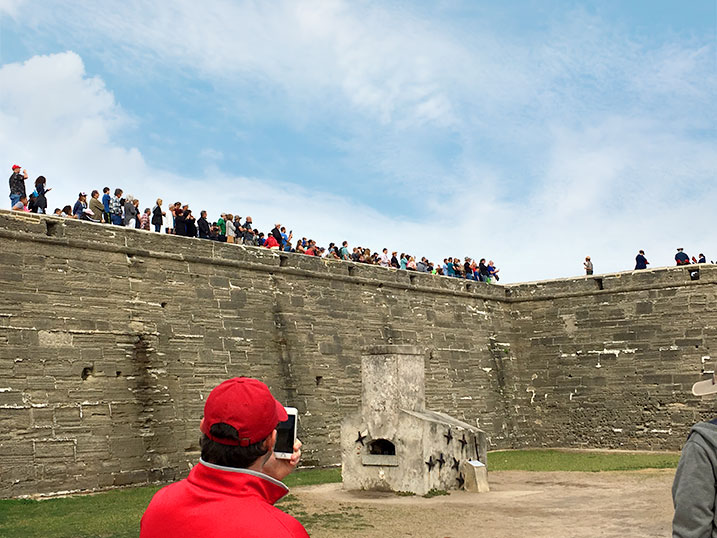 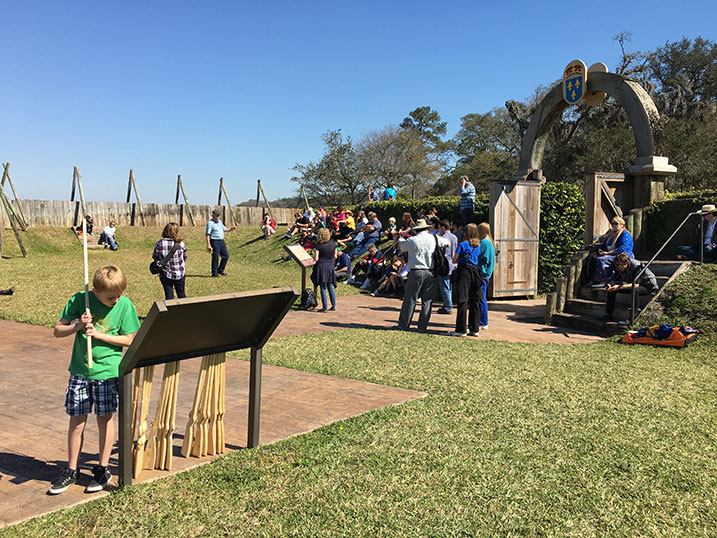 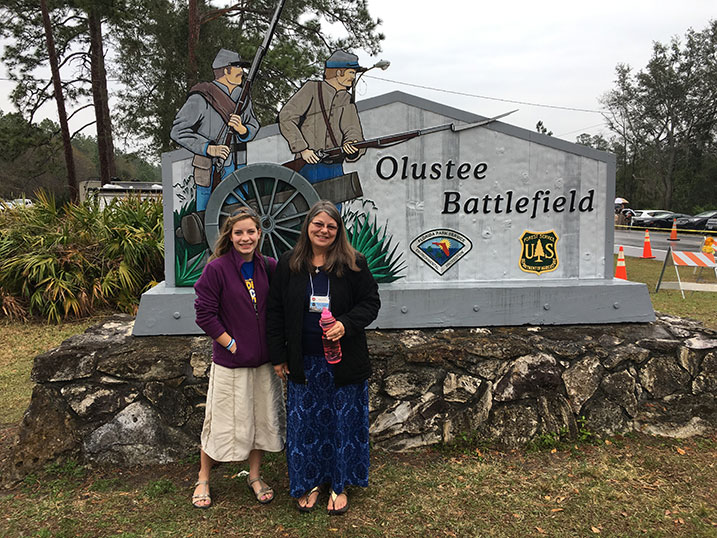 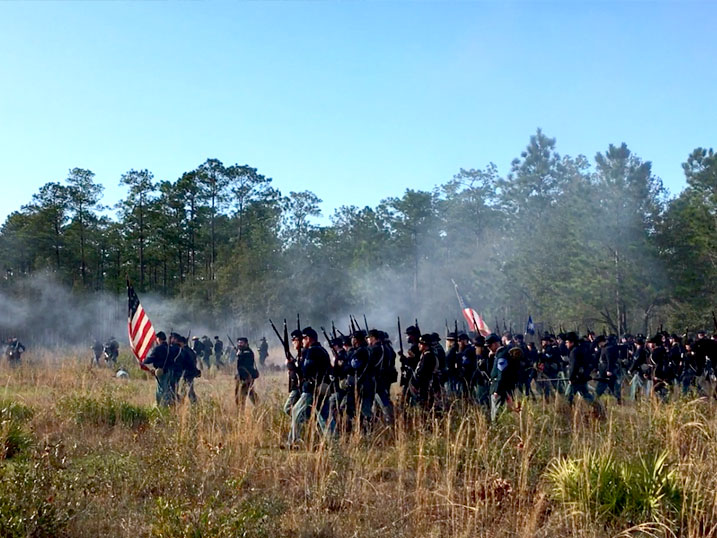 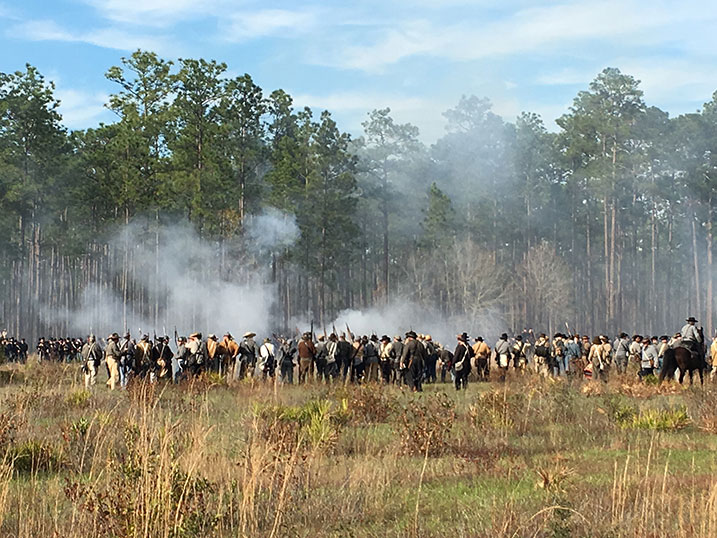 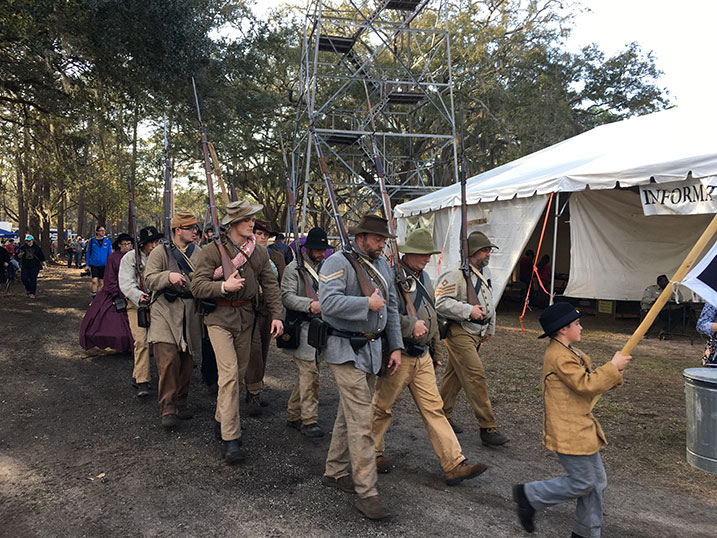