The Birth of Napoleon Bonaparte, 1769

There are six things which the Lord hates, yes, seven which are an abomination to Him: haughty eyes, a lying tongue, and hands that shed innocent blood, A heart that devises wicked plans, feet that run rapidly to evil, a false witness who utters lies, and one who spreads strife among brothers.” —Proverbs 6:16-19

he British called him all sorts of things: The Beast, The Monster, the Man of Blood, the Little Corporal, and Old Boney. No doubt other European nations had their special names for him. He was the most hated and the most beloved man on the continent. His actions resulted in the deaths of hundreds of thousands, perhaps millions, of people. He came from well-to-do minor nobility of Italian descent on the Island of Corsica. Whether you call him by his given name, a nickname, or an anthropomorphic nightmare appellation, he changed history in a large way. His given name was Napoleon Bonaparte. 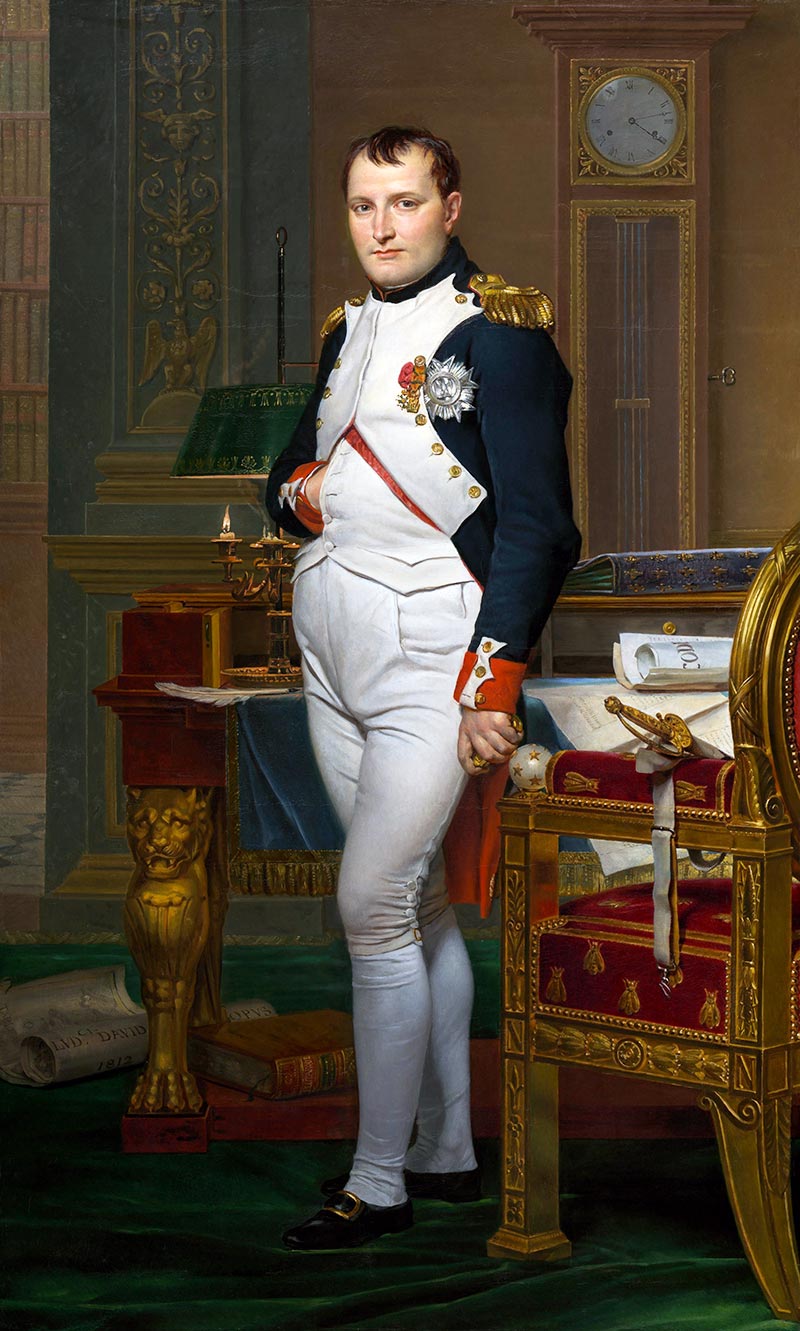 As a young man Bonaparte attended the French military college—the first Corsican to graduate from that distinguished institution. He spoke fluent Corsican and Italian and a heavily accented French. In 1785 he was commissioned a 2nd Lieutenant in the artillery. With his support of the French Revolution, Napoleon received a captain’s commission. He published a pro-revolution pamphlet and led his artillery in the siege of Toulon, where he was wounded and came to the attention of the Committee of Safety, who in effect ruled France. The revolutionaries ignored the historic protocols for advancement based on seniority or social standing, that the royal government had followed, and elevated loyal and successful men of the Revolution. The council promoted Napoleon to Brigadier General and sent him on campaign in Italy after he successfully defended the National Convention from attackers, by deploying his artillery and slaughtering the mobs. 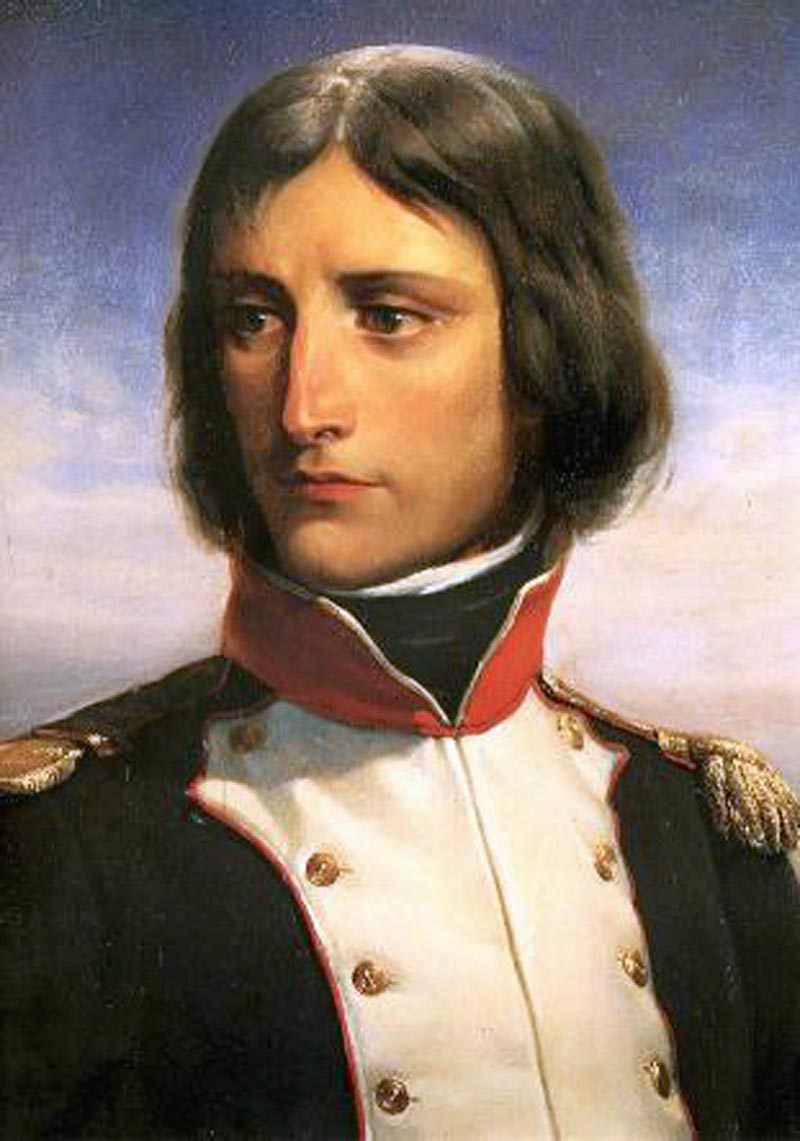 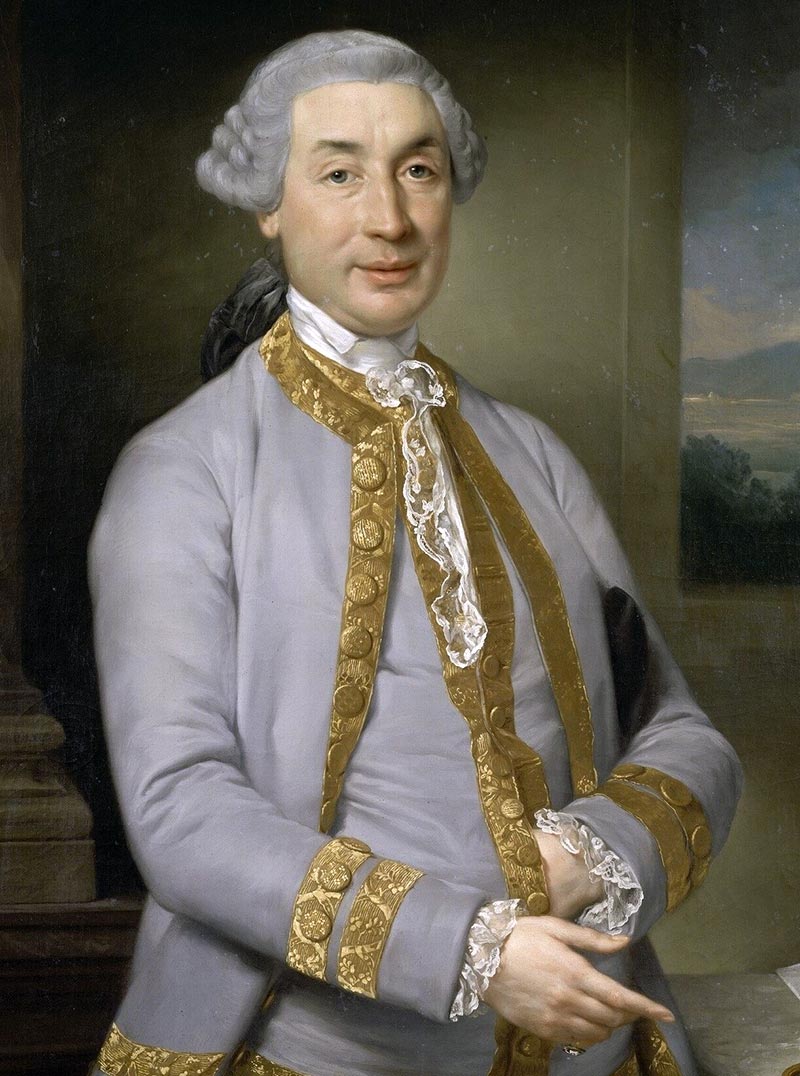 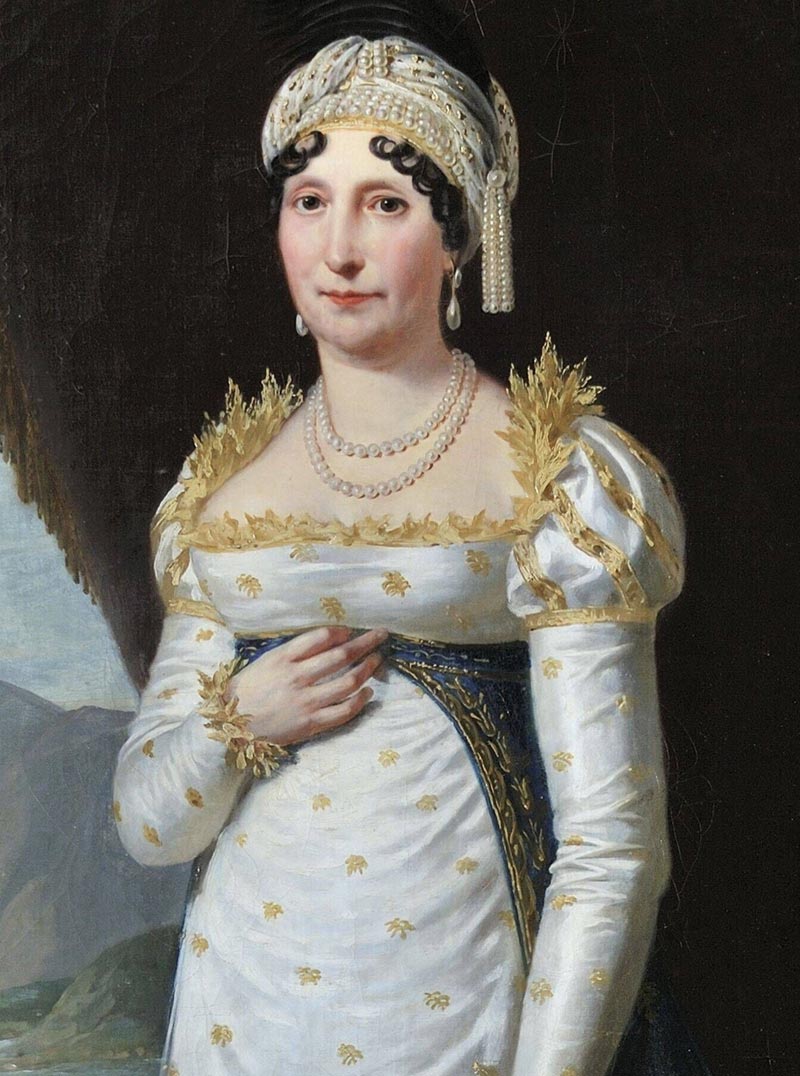 The Revolutionary French army went to war with several other European nations simultaneously, especially Britain. Napoleon took his army to Egypt, defeating the Mamluks there, and awaited the British armies that would come to shore up their empire. Napoleon’s 13,000-man army defeated and destroyed city after city in the Middle East until his own fleet was destroyed in the Battle of the Nile by Lord Horatio Nelson. Most of the French army perished from bubonic plague and battle casualties before he returned to France, greeted as a hero. 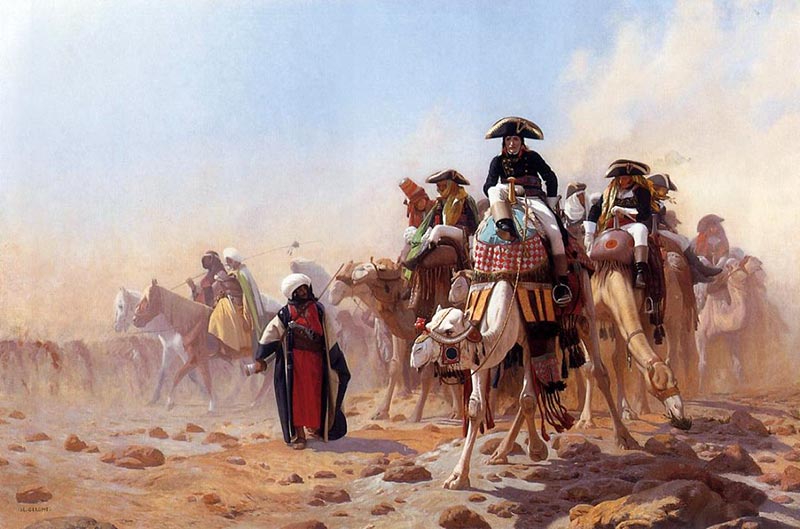 Napoleon at the Battle of Shubra Khit, the first major engagement of his Egypt campaign, July 13, 1798 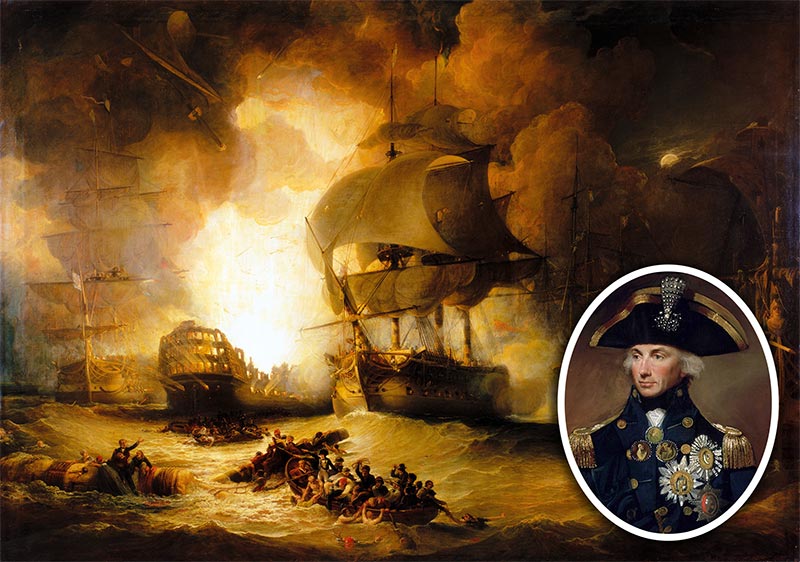 The Battle of the Nile (August 1-3, 1798) with Admiral Horatio Nelson superimposed. Visible on his tricorn is a token presented by the Ottoman Sultan as a reward for the victory at the Nile.

Taking command of the French armies on behalf of the “Republic,” Napoleon channeled their revolutionary fervor into systematic campaigns against Austria, Prussia, Italy, Spain and Portugal, defeating them all in spectacular and bloody victories, with occasional peace treaties in between. Europe had never seen a warrior such as Bonaparte; he redrew the boundaries of nations and placed his relatives on thrones. In 1804 he crowned himself Emperor, a permanent First Consul, reminiscent of the Roman Caesars. The vast majority of the French electorate decided in his favor, although assassination plots were consistently being revealed by his secret service. 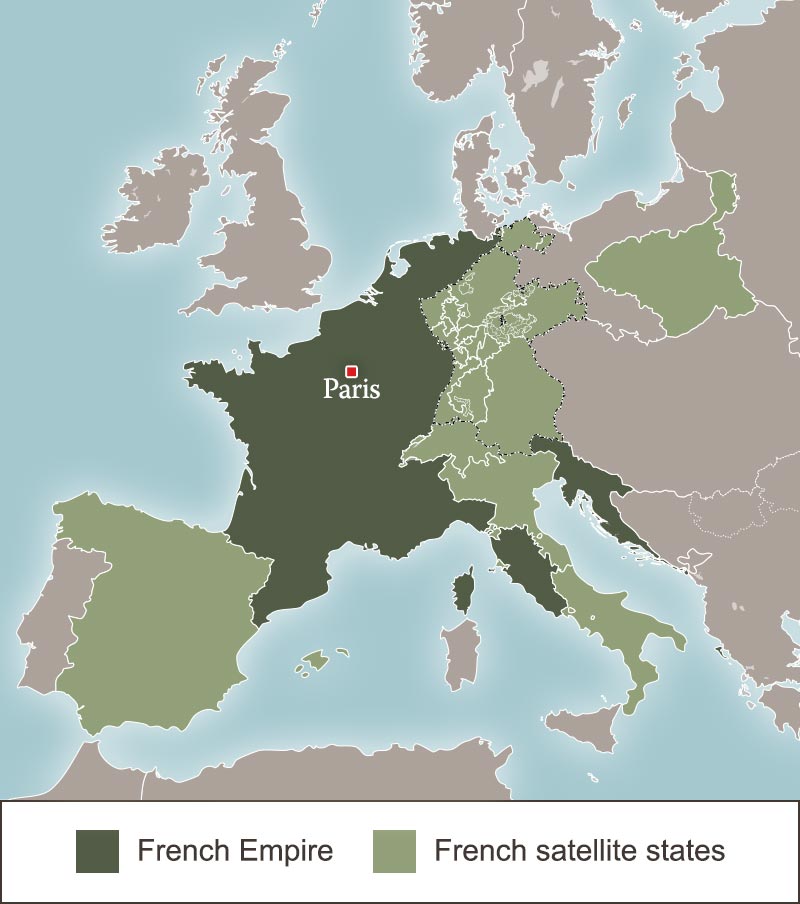 The French Empire at its zenith in 1812 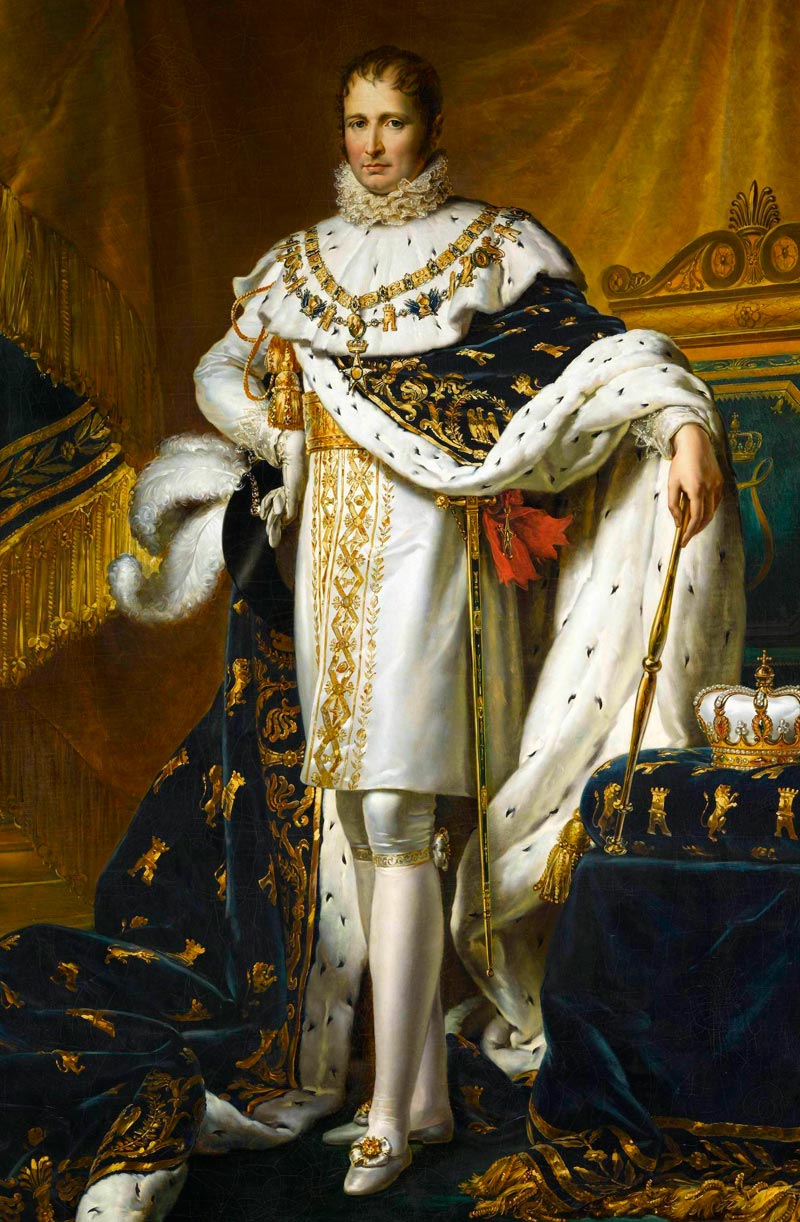 Joseph Bonaparte (1768-1844), appointed King of Spain by his brother Napoleon 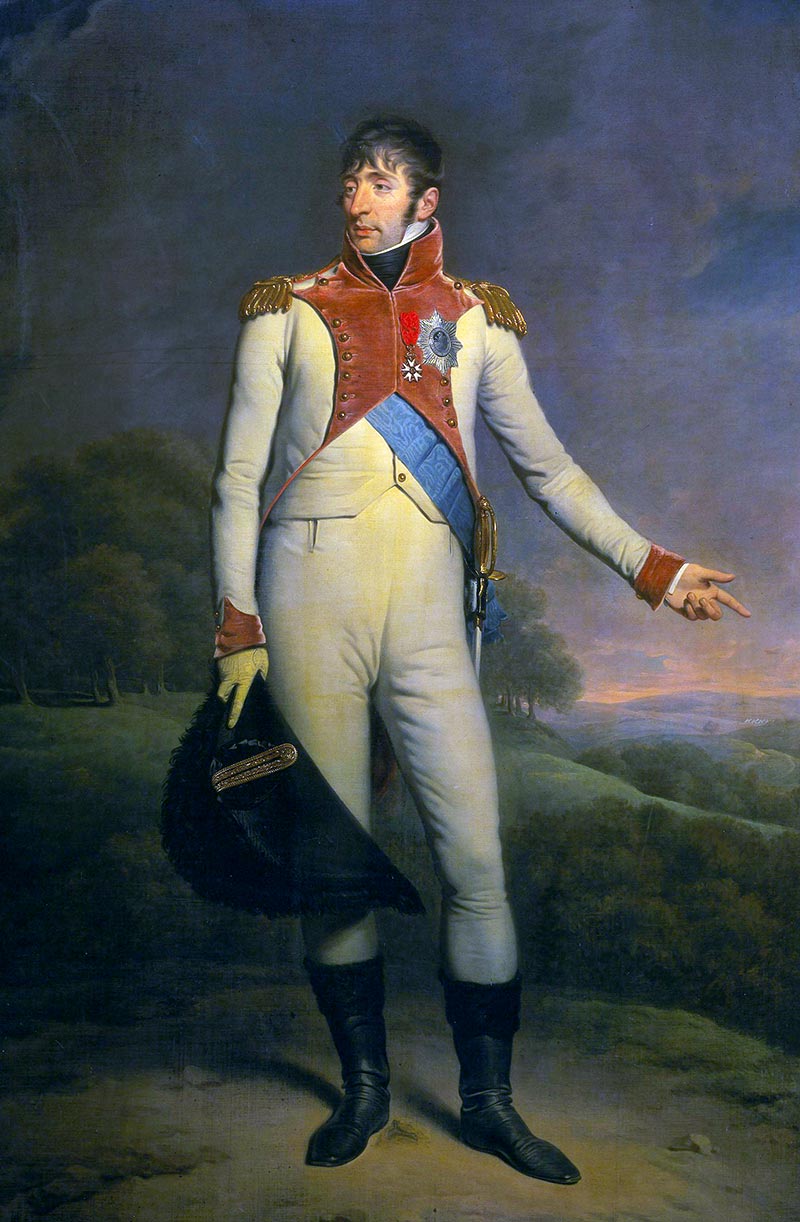 Louis Bonaparte (1778-1846), appointed King of Holland by his brother Napoleon

Coalitions of his enemies continued wars against France unabated until 1814, with battles of unprecedented size and ferocity. In 1808, Napoleon invaded Russia, defeating the Tsar’s armies at Borodino, which resulted in a combined 80,000 killed. He failed, however, to capture Moscow, and the battles and long winter retreat cost France more than 350,000 dead. In 1813, the Sixth Coalition attacked France once more, finally defeating Napoleon’s army and sending him into exile on the Island of Elba. He escaped, however, and once more electrified the population with memories of the glory and elan of past French victories. 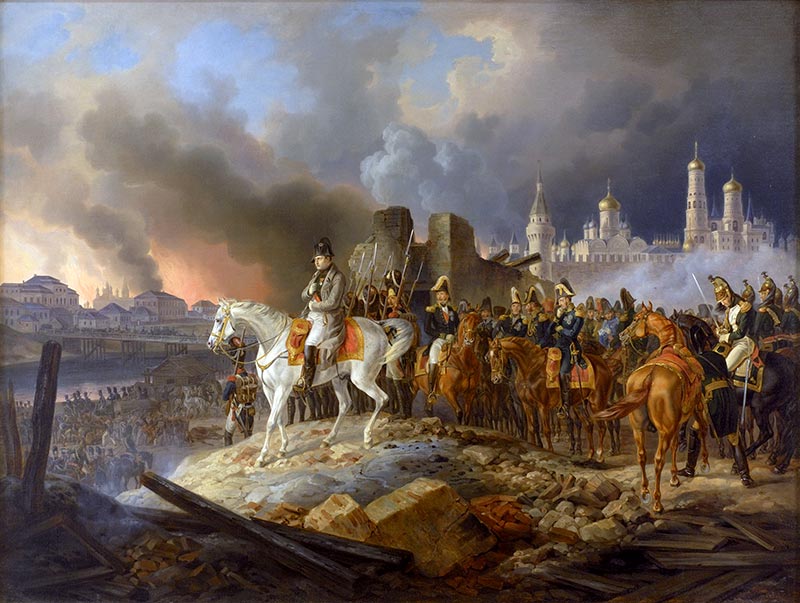 Napoleon watching the fire of Moscow, September of 1812 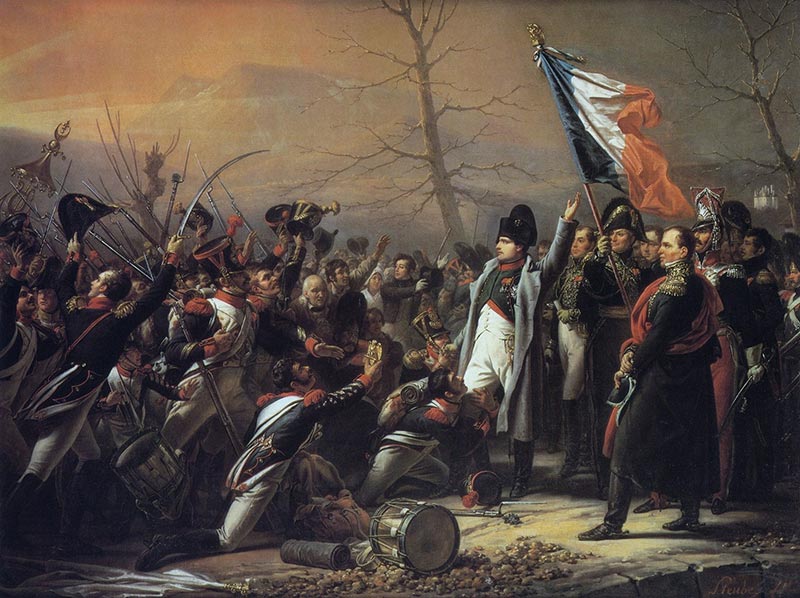 France rallied once more to Bonaparte’s banners as 200,000 men chose once more to follow their Emperor against England and Prussia. He lost it all to British General Arthur Wellesley, the Duke of Wellington and to Marshall Blucher of Prussia in the decisive Battle of Waterloo on June 18, 1815. Napoleon was forced to abdicate and went into exile once more, this time to the Island of St. Helena. In exile he wrote a biography of Julius Caesar, a tyrant to whom he favorably compared himself. Napoleon died in 1821, reconciled to the Catholic Church of his youth after many years excommunicated, and secure in his place in history. 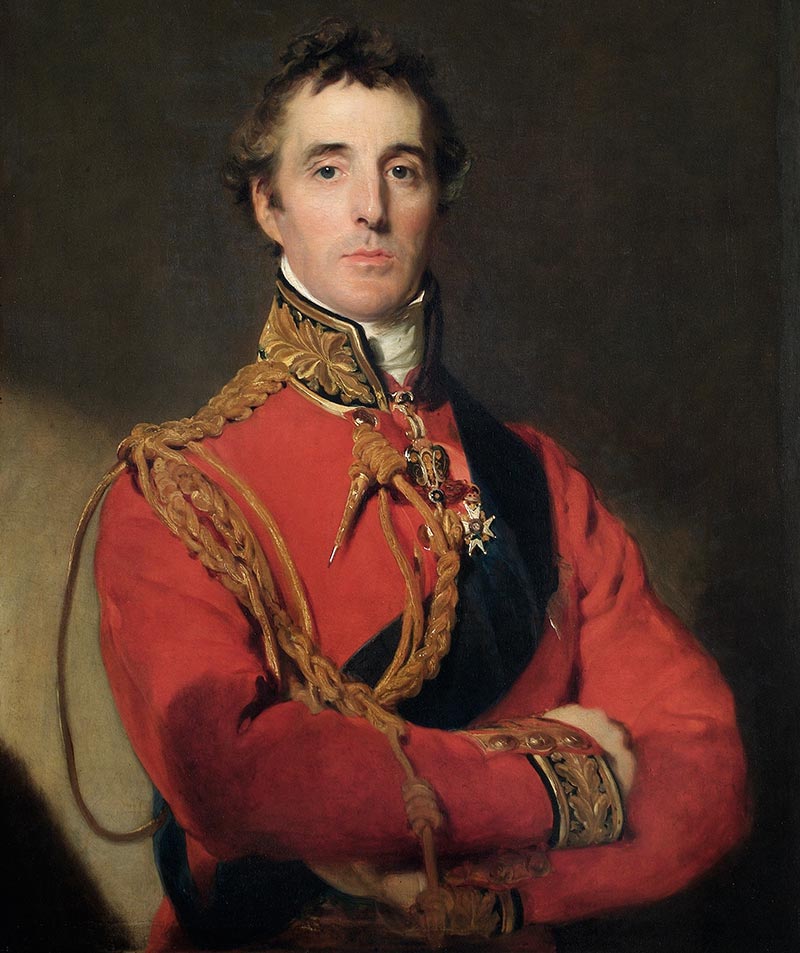 Napoleon’s final defeat at the Battle of Waterloo (in modern-day Belgium), June 18, 1815

There are multiple thousands of books on Napoleon, examining his military and political genius, his hypnotic effect on people, charismatic personality, and reforming zeal in French politics and culture. Although short in stature, he became a giant among the leaders of history, and defined the course of the rest of the 19th Century. France has never recovered the glory and place it possessed on the European continent, compared to the greatness achieved by Napoleon. His wars cost hundreds of thousands of young lives in every country and his campaigns are still studied in the military academies around the world. If you hold to elements of the Great Man Theory of History, Napoleon Bonaparte could be the poster boy par excellence, although in his day he was considered one of the greatest monsters of history, a picture of the sort of strong man who seizes power and restores order when revolution brings chaos and confusion. 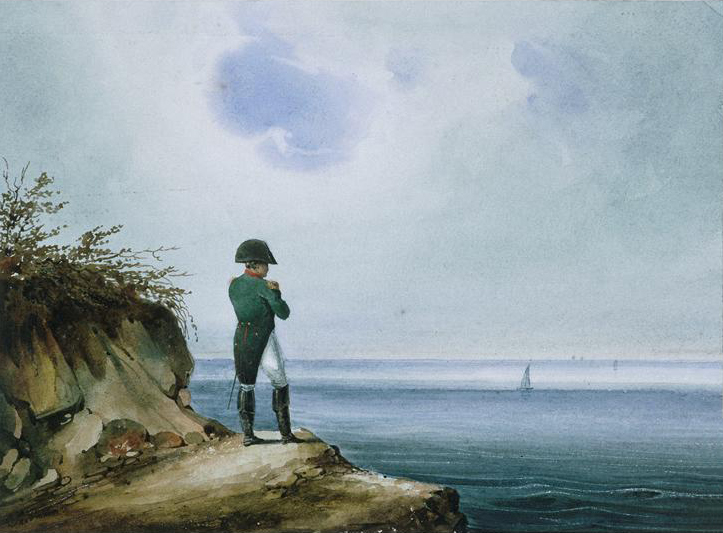 Napoleon was exiled to the island of St. Helena, nearly 1,200 miles off the West coast of Africa where he eventually died in 1821