“When I consider the heavens, the work of Your fingers, the moon and the stars which You have ordained. What is man that You are mindful of him?” —Psalm 8:3, 4a

First Walk on the Moon

n the 20th of July, 1969 two United States Astronauts, Neil Armstrong and Buzz Aldrin disembarked from their lunar module and stepped onto the moon. Some people believed it was the greatest achievement that man accomplished in history. Some believe it was the most colossal waste of money ever conceived by a government; still others believe it never happened and that NASA bamboozled all the people on earth (except those who claim it did not happen). Whoever is right, or none of the above, the success of the Apollo space program provided an event that billions of people watched or followed in print and which has turned history in a direction formerly found only in the imagination of science fiction writers. 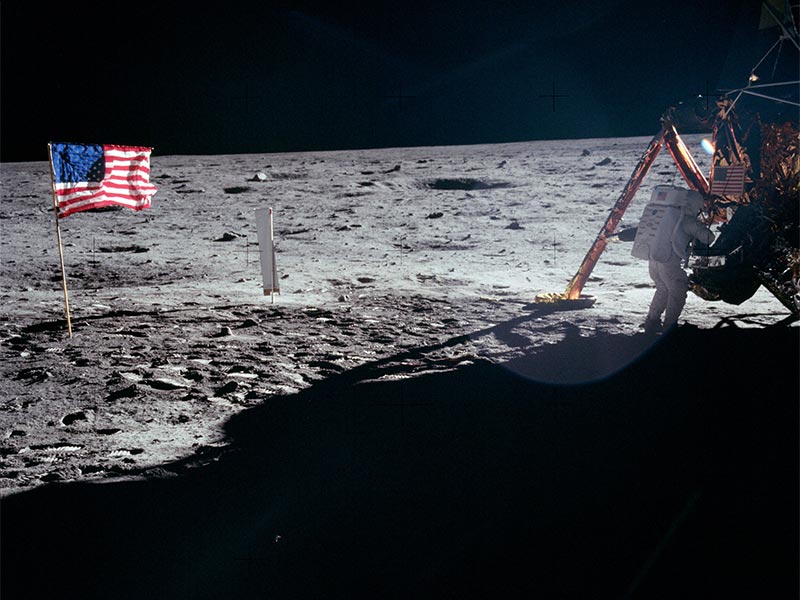 The official motivation for landing a man on the moon — as far as the public was concerned — came from President John F. Kennedy who cast the vision in 1961 in a speech before Congress, the text of which came from NASA, calling for a moon landing within a decade. Plenty of preparation had already been fulfilled during the Eisenhower administration with the Mercury unmanned space program, but the first astronaut to fly in space occurred only one month before Kennedy’s speech. The Apollo Program to land men on the moon itself lasted from 1961-1972. Apollo 8 carried the first men to circle the moon and return safely, Apollo 11 landed men on the moon and the program concluded with Apollo 17. Six successful moon landings were conducted in the course of the program. 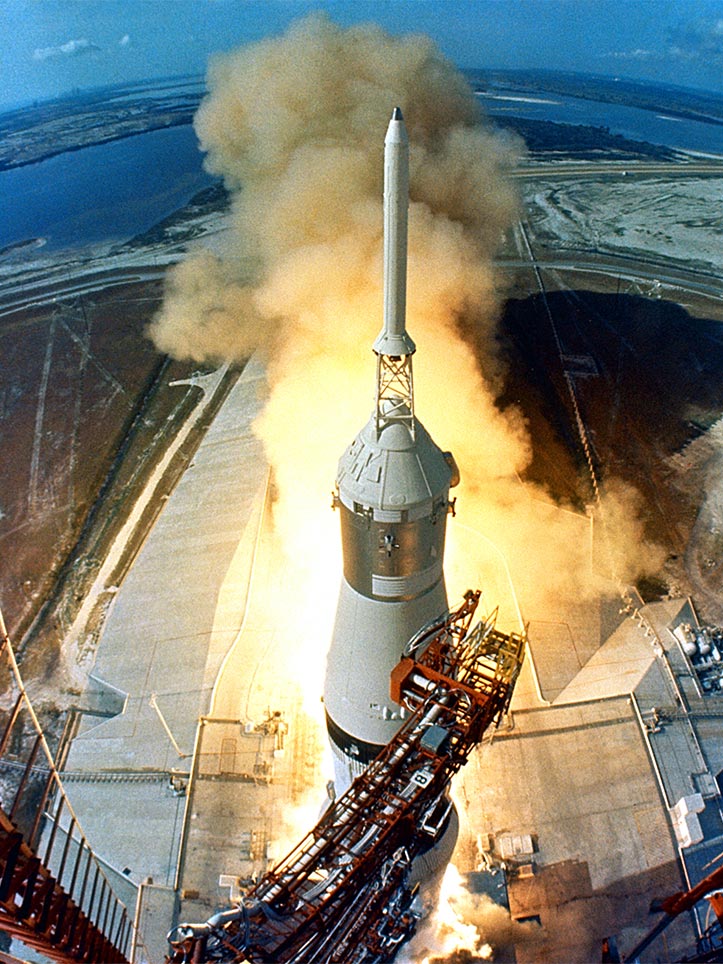 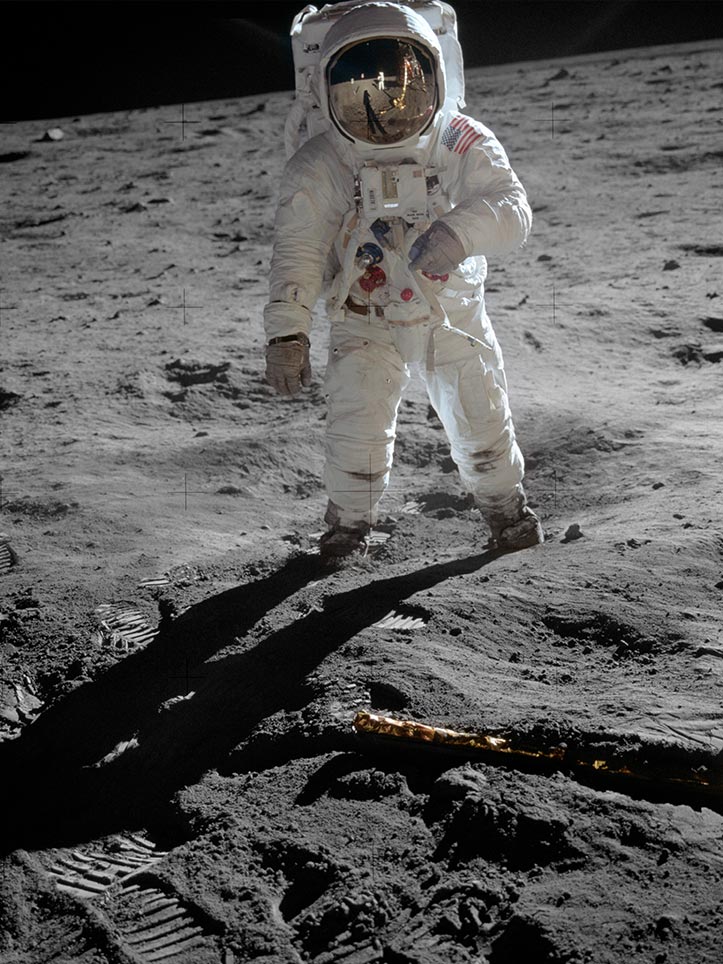 The spacecraft for Apollo 11 had three components — a command module, Columbia, with a cabin for the three astronauts (the only part that would actually return to earth), a service module which provided propulsion, electrical power, oxygen and water, and a two-part lunar module named the Eagle which carried two of the men to the surface of the moon and returned them to the command module. A Saturn V rocket blasted the spacecraft into orbit. 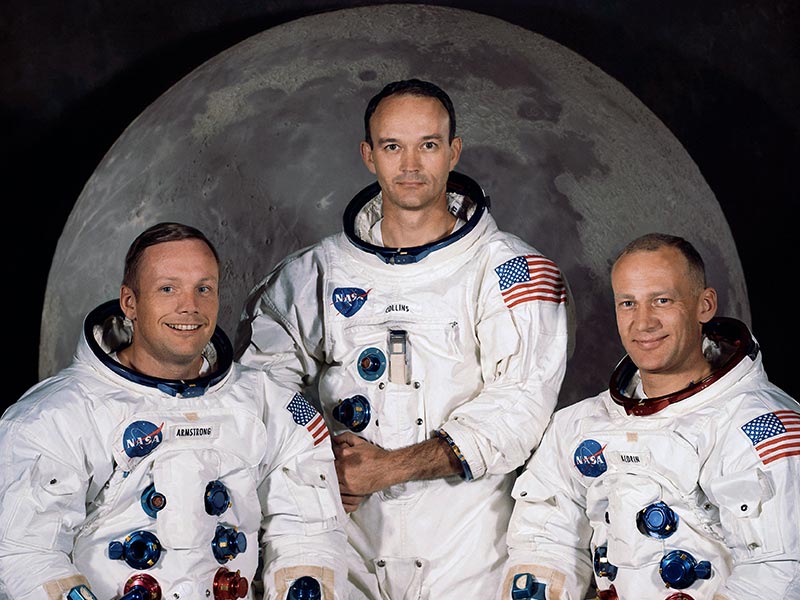 The whole world watched breathlessly on television till the lunar module landed softly in the “Sea of Tranquility” on the moon’s surface. As Neil Armstrong set foot on the moon he uttered the now iconic phrase, “one small step for man, one giant leap for mankind.” The benefits of spending billions of dollars to accomplish the task have been debated ever since. New commercial products were developed in the course of space R & D, the space race with the Soviet Union was declared over, and several tons of rocks and dust from the moon were brought to earth for people to ooh and ahh over in the Smithsonian Museum. The astonishing complexity and ingenious physics of space travel have spawned movies, new theories of the origin of the universe, and renewed efforts in unmanned space exploration. None of it changes one iota of…

“Then God made two great lights: the greater light to rule the day and the lesser light to rule the night. He made the stars also. God set them in the firmament of the heavens to give light on the earth, and to rule over the day and over the night and to divide the light from the darkness. And God saw that it was good. So the evening and the morning were the fourth day.” —Genesis 1: 16-19