“You are my King, O God; Command victories for Jacob. Through you we will push back our adversaries; through your name we will trample down those who rise up against us.” —Psalm 44:4, 5

nside the greatest cathedral in Scotland — St. Giles in Edinburgh — are memorials one might expect to see in such a historically significant site. There is a life-size bronze statue of the Reformer John Knox and the tombs of two bitter enemies buried on either side of the transept (it’s Scotland, after all): the Duke of Argyll, defender of the Covenant and the Marquis of Montrose, warrior of the King. The monument that takes you by surprise, however, is what appears to be a bronze three-legged milking stool on a pedestal next to the help-desk. It was presented to the Cathedral in 1992 by a group of forty Scotswomen. The hurling of a stool at the Cathedral Dean, by Jenny Geddes, as he read from the Prayer Book on July 23, 1637, started a revolution. 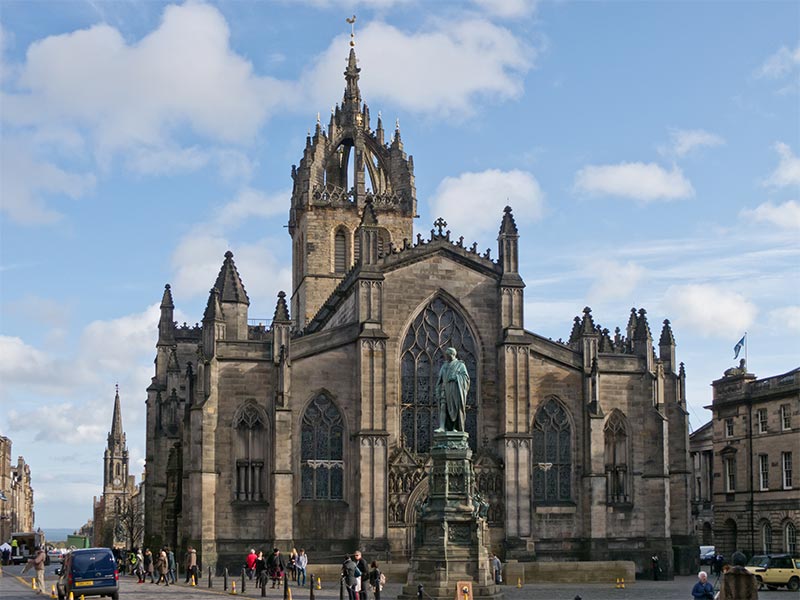 In March of 1625, Charles Stuart, son of King James I, acceded to the throne of England as King Charles I. While he continued many of the policies of his father, he had neither the tact nor the cleverness of his sire. He promoted the high church proclivities he had inherited, increasing the distrust of his Puritan subjects by marrying a Roman Catholic princess (Roman Catholicism was banned in England), dismissed Parliament and ruled by “divine right” without them. He chose as the new Archbishop of Canterbury William Laud, who promoted ceremonies, liturgies, and pomp reminiscent of the papal church. 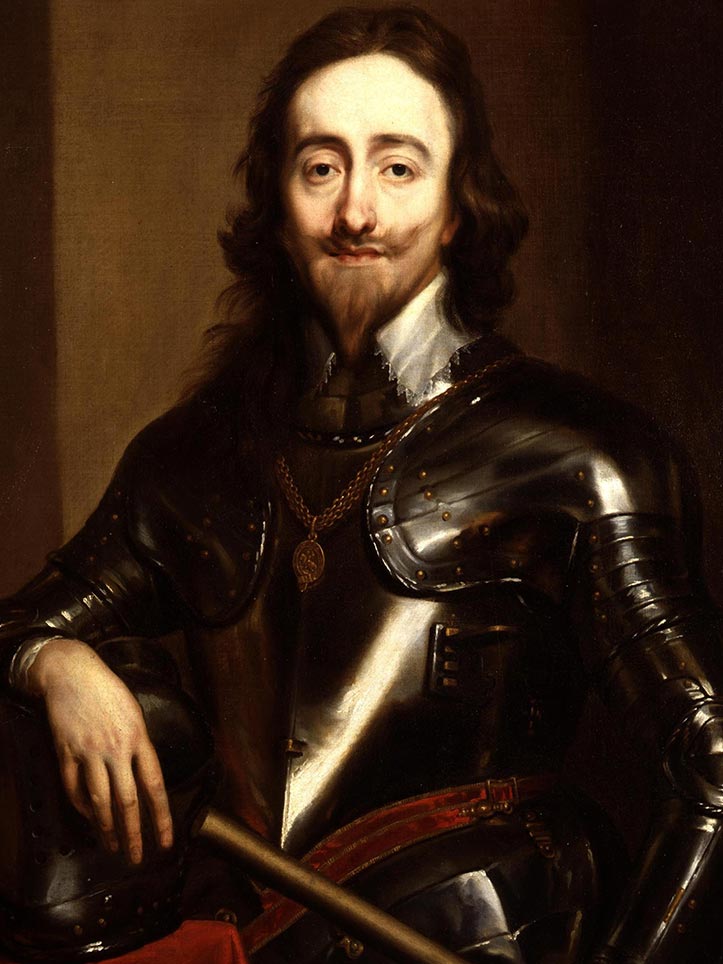 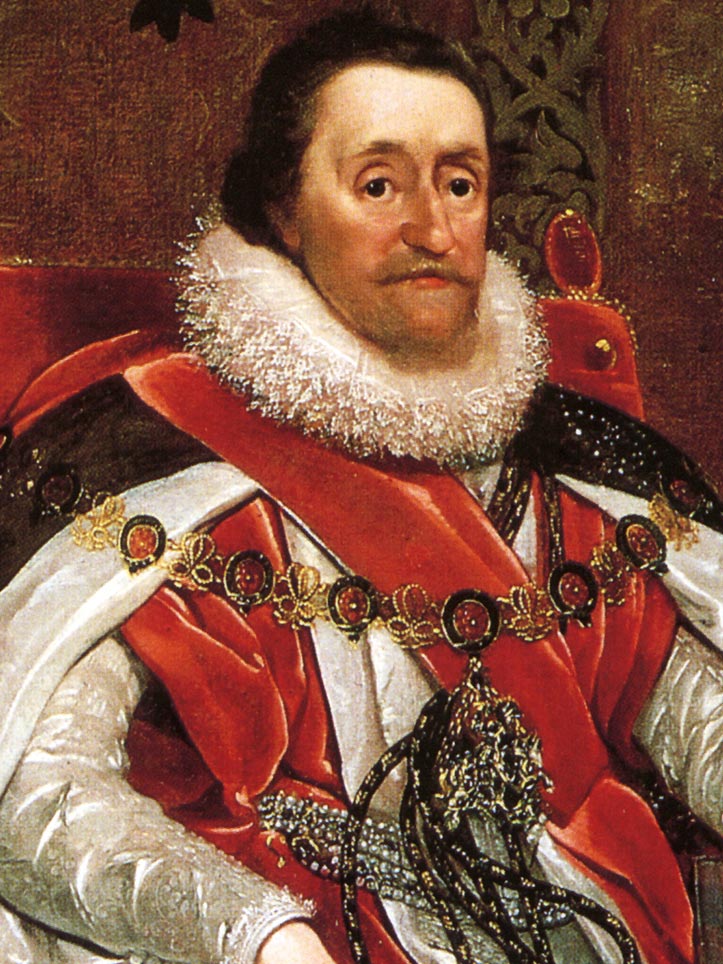 In Scotland, the reaction to King Charles and his Laudian ecclesiastical innovations met with outrage from the pastors and elders of the Church of Scotland, most of whom were still presbyterian in polity and doctrine. Laud believed the Scottish Kirk should conform to the prelatical system established in England and, for the Scots, became the personification of what Alexander Henderson called a conspiracy of corrupt bishops “to misinform the king of the liturgy and ecclesiology of the Scottish Kirk.” Arminian doctrine was central to the attempted uniformity of religion being imposed by Laud, and the Scots saw it as tantamount to the beliefs of the papal Church. 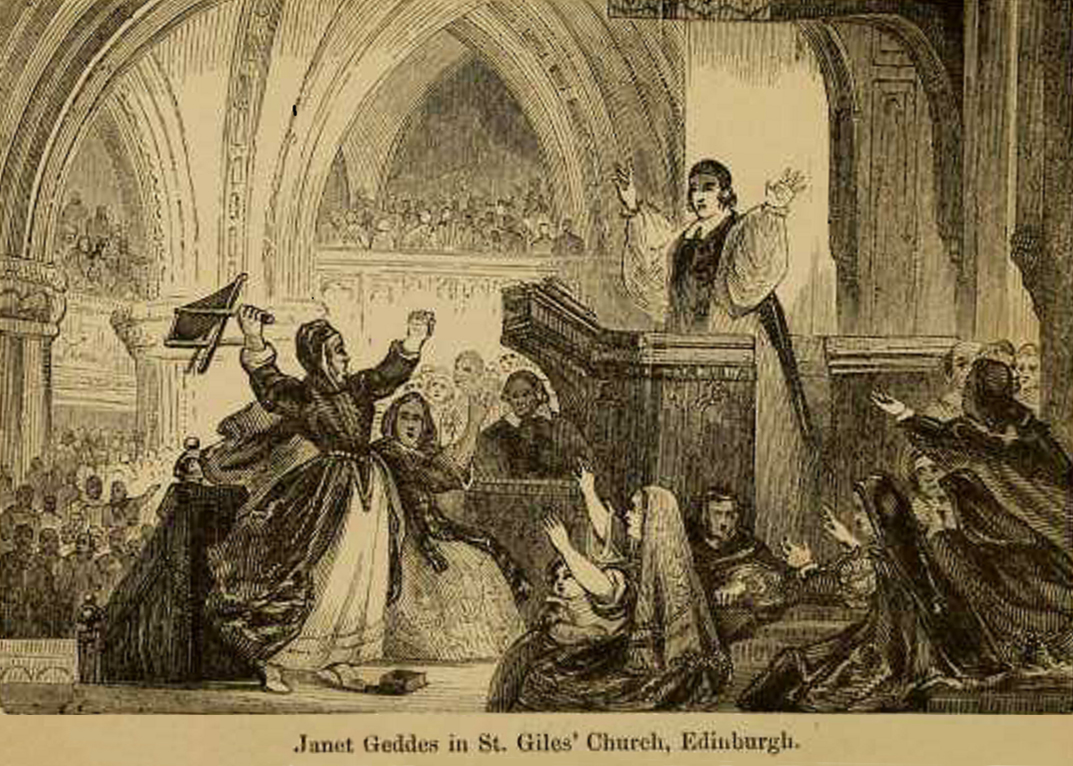 Jenny Geddes hurls a stool at the Cathedral Dean

On 23 July, 1637 Dean Hannay rose to read the new liturgy in the High Church of Edinburgh, St. Giles. The liturgy had nineteen chapters within its forty-three pages “detailing how the church should be governed, from the King gaining his position from God, down to the renaming of ministers, kirk sessions, and presbyteries with terms taken from the Episcopal Church.” As the pastor began intoning from the prayer book, Jenny Geddes, allegedly a local street vendor, stood up and yelled, “Wha dur say mass in my lug!” (How dare you say the Mass in my ear) and flung her three-legged stool at the minister. Pandemonium broke out as others followed suit and the prelatical entourage fled the scene out a back door. The town guard had to rescue the bishop from the rioters. Similar scenes were enacted in other Scottish towns where the liturgy was read. 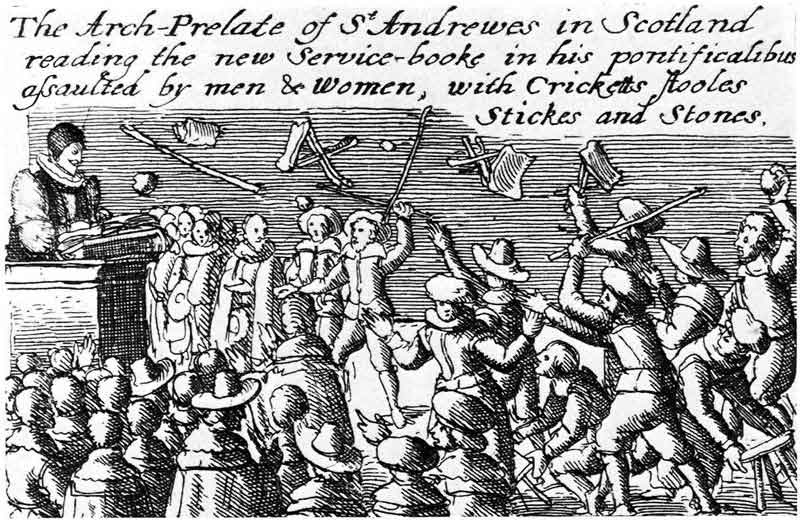 The Scots had not experienced a thoroughgoing Reformation seventy years before, just to see it succumb to the heresies of a foreign archbishop and a King usurping the “Crown Rights of King Jesus.” The next year the General Assembly issued the National Covenant, assuring the King of their complete loyalty to him in his proper jurisdiction, but denying his authority over Christ’s Church and the biblical principles of worship. War ensued for the better part of ten years, but the Kirk remained free till the Restoration of the next King, Charles II, when persecution would ensue for about 27 years more.

Learn More and Register for the 2018 Scotland Adventure