he Oxford English Dictionary (OED) defines more than a half million words and it took more than seventy years to research and write the original “twelve tombstone-size volumes.” It is the gold standard of the English language. On August 14, 1879, Scottish polymath James Murray was given the go-ahead by the Philological Society of England to begin the work of tracing the history of every single word in the English language and providing a definition faithful to its meaning. As the editor of the OED, he had the task of finding all the words as used in classical and standard written works in English. His historical starting point was the year 1150 AD. 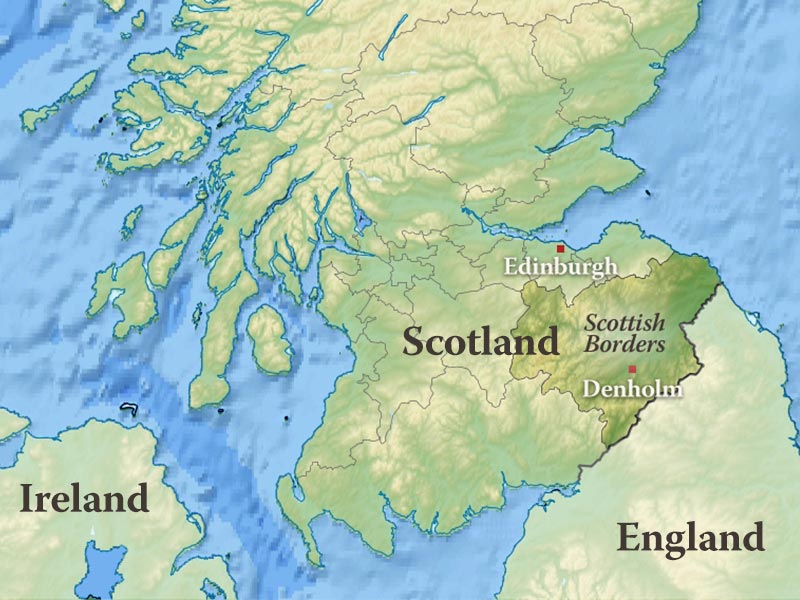 Denholm, birthplace of James Murray, is located in the Scottish Borders Council Area

Murray was a “self-educated country boy” from the Scottish Borders village of Denholm. He had to leave school at fourteen for lack of funds, but he continued learning on his own, with a special interest in etymology — “He was captivated by words and strange languages.” Murray mastered Spanish, French, Catalan, Italian and Latin and, “to a lesser degree”, Portuguese, Vaudois, and Provençal, as well as other various dialects. He also acquired a working knowledge of Gaelic, Dutch, German, Danish, Slavonic and Russian. He knew Hebrew and Syriac well enough to sight read the Old Testament and picked up to a lesser degree Coptic, Phoenician and Arabic. He taught school and worked in a bank as an administrator in London, but his real passion was language. 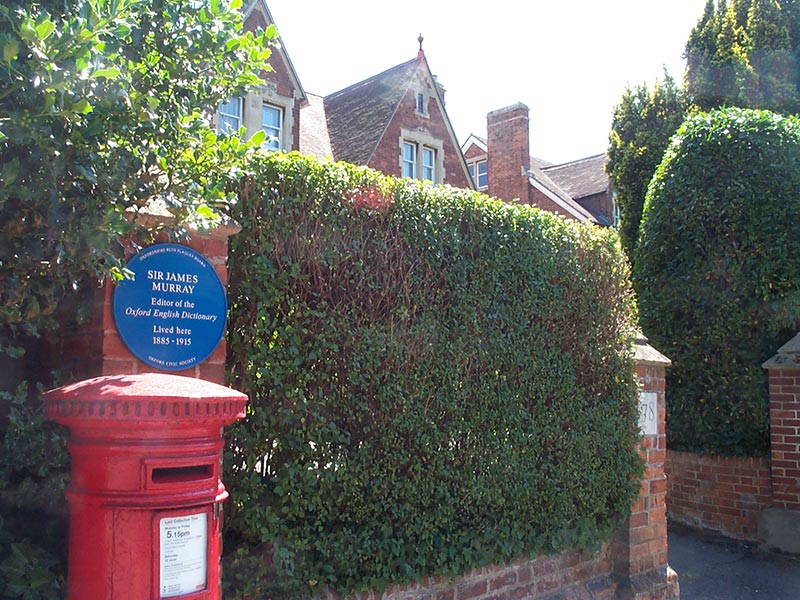 By 1879, at the age of forty-two, James Murray began his real life’s work creating the Oxford English Dictionary. All eleven of his children lived to maturity and they, his wife, and eventually, grandchildren all helped in the project. He was permitted to use an iron shed on the property of the school where he taught, which he had outfitted with a thousand pigeon-holed rack to hold the quotations slips for the words. Before long, the “scriptorium” was ready and the project was begun. Through the Philological Society he issued An Appeal to the English-Speaking and English-Reading Public in Great Britain, America and the British Colonies, asking for a thousand readers for the next three years to supply him with good quotations, thus determining how various English words were used over the centuries. They were to avoid Bible Concordances, Shakespeare, and Edmund Burke — sources already combed. 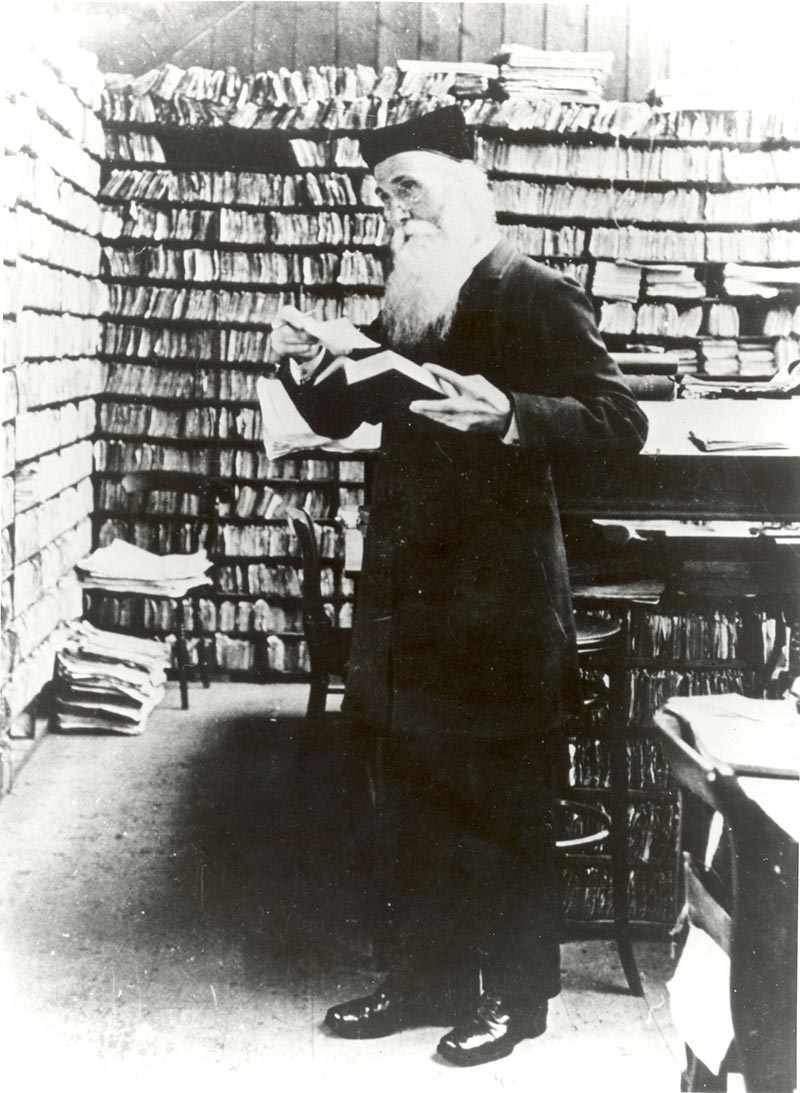 James Murray stands in the Scriptorium

Dictionary slips and their sorting became a major part of life for the Murray family. People from all over the world sent in slips with the desired information. Several sub-editors and the children sorted through them and into the pigeon holes they went. One of Murray’s sons provided 27,000 quotations on his own, according to the introduction in the first volume. The entire story is amazing — the perseverance, erudition and dedication of Murray became legendary, as did some of the characters that sent in quotes. One of the best, most erudite and apparently brilliant contributors turned out to be a murderer from America, locked up in a prison for the criminally insane in England! (As recounted in The Professor and the Madman by Simon Winchester). 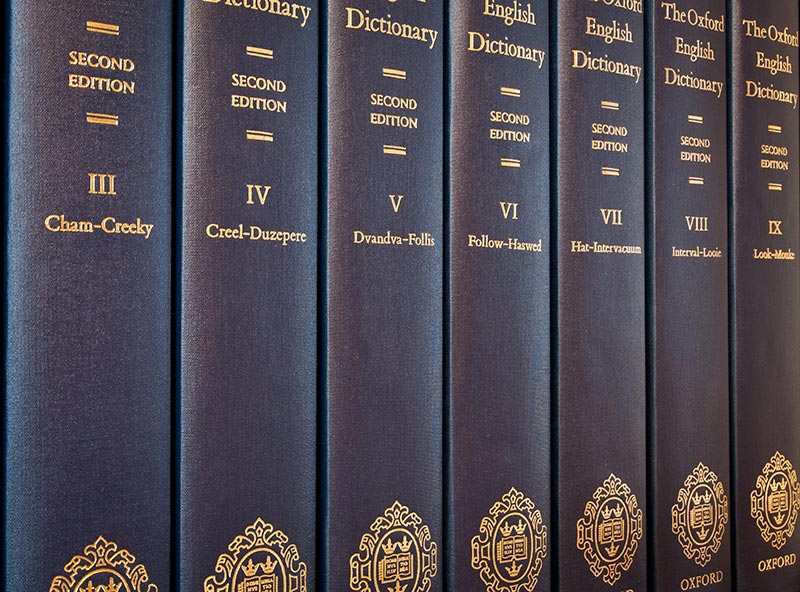 Seven of the twelve volumes of the Oxford English Dictionary

After reading all the quotations sent in for a particular word, Murray would write the “concise, scholarly, accurate, and lovingly elegant definition for which the Dictionary is well known.” The task was enormously difficult but for thirty-five years Murray stuck to it till the day of his death. Although he died in 1915 — thirteen years before the OED was first published — the patient drudgery of the devout Scotsman paid off with twelve mighty volumes of more than 400,000 words and more than 1.8 million illustrative quotations. The OED remains the unparalleled standard of definitions for every English word, and is, of course, added to every year. The magnificent story of this singular Christian lexicographer was finally told by Murray’s granddaughter K.M. Elizabeth Murray in Caught in the Web of Words: James Murray and the Oxford English Dictionary (1977).

Words have meaning, but when a culture redefines the fixed understanding of words, demagogues take advantage of the uncertainty and chaos that results, to change the culture itself. We must be wary of the malleable ways that enemies of the original intent of words, deconstruct meaning, to the destruction of morality and truth.