he impact of itinerant English evangelist George Whitefield’s preaching was felt across New England. Many people were converted to Christ, and Christians were renewed in their faith. Ministers of the region followed up on Whitefield’s success with powerful evangelistic preaching throughout the 1740s. The man whose ministry seemed most blessed in the “Great Awakening” was Jonathan Edwards, a brilliant theologian, philosopher and polymath, as well as a warm-hearted pastor. Among even casual observers of colonial Massachusetts history, one of his sermons (later published) illustrated above all others the power and imagery of Reformed evangelistic preaching of the era. It was addressed to both the hard-hearted and the faint-hearted: “Sinners in the Hands of an Angry God”. 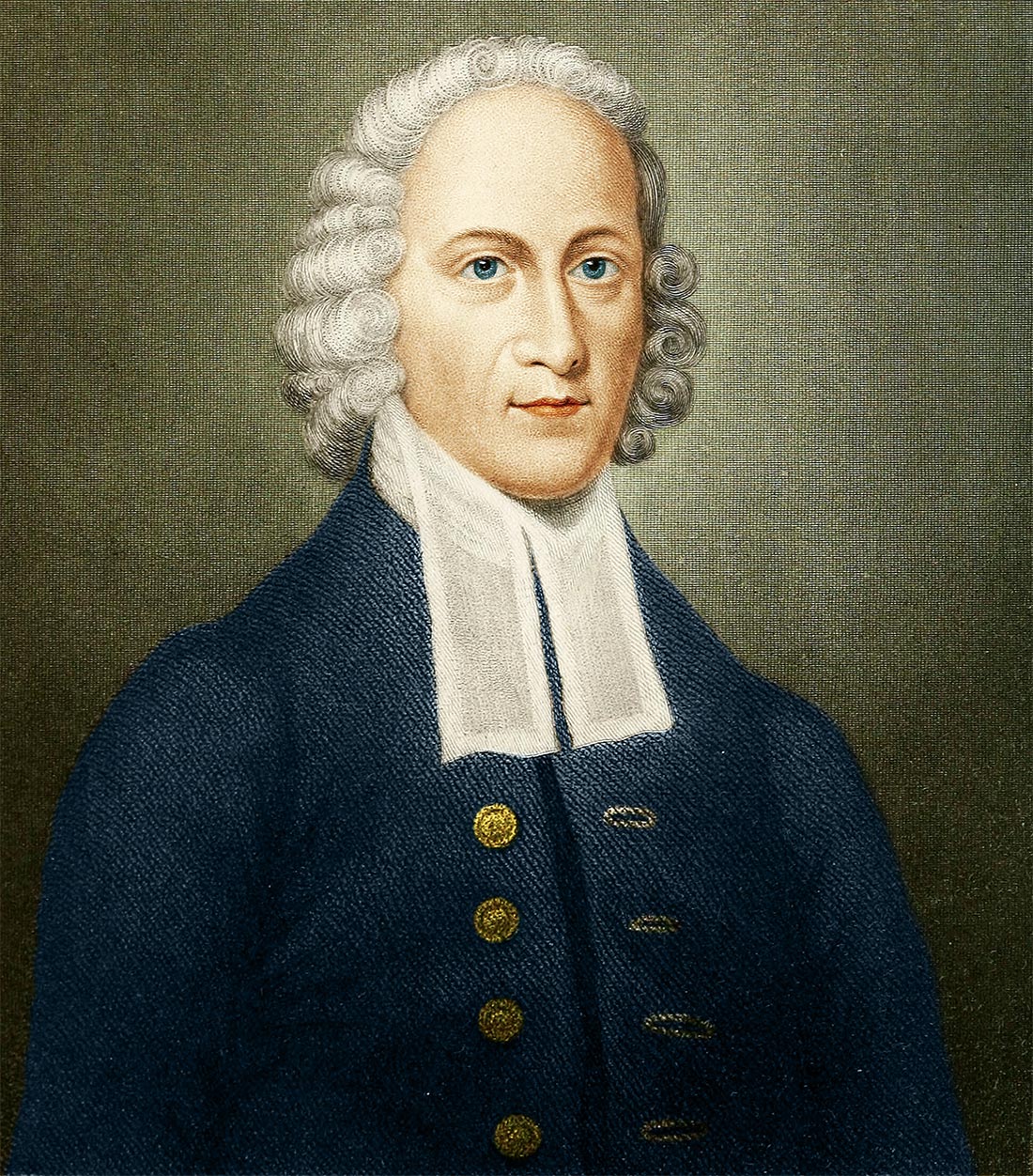 New England churches were full of careless and spiritually unconcerned members and attendees. The vitality and power of their Puritan forefathers seemed but a distant relic of the past, as prosperity, diversity of population, and enlightenment philosophy increasingly influenced the popular culture and intellectual climate of the day. In the late 1730s, signs of serious spiritual “awakening” appeared in several towns in Massachusetts and Connecticut. The arrival of the Rev. George Whitefield in the first of three visits to America found the spiritual fields “ripe unto harvest”. As he and other Calvinist preachers presented the Gospel, their efforts were suddenly visited with remarkable results, in what a future historian would term “the Great Awakening”. 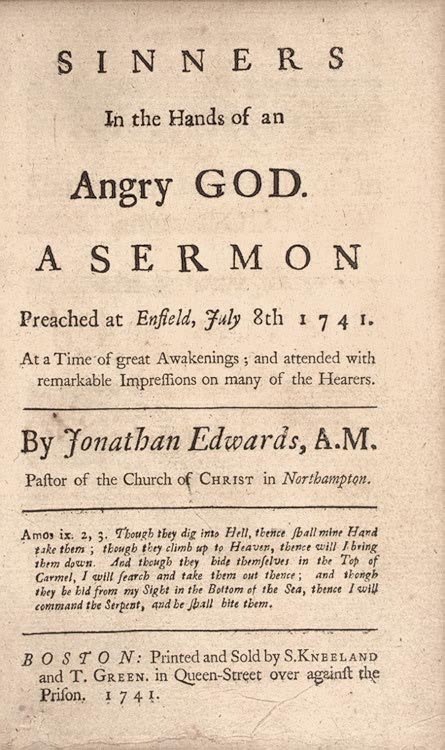 Jonathan Edwards — the pastor of the Congregational Church in Northampton, Massachusetts — delivered a sermon in his church in late March of 1742 which he entitled “Sinners in the Hands of an Angry God”. Members of the congregation cried out in terror for their own eternal destiny, weeping and calling on God to save them. They were people young and old who had heard the Gospel all their lives. They knew all the major doctrines of the Christian faith yet were unconcerned about their own souls; one visitor said they were “thoughtless and vain and hardly conducted themselves with common decency”. Edwards’s delivery was undramatic and plain-spoken but, as George Marsden has written in his biography of Edwards, “The combination of controlled but transparent emotion, heartfelt sincerity both in admonition and compassion, inexorable logic and biblical themes could draw people into sensing the reality of ideas long familiar”. And what a reality of ideas he presented! 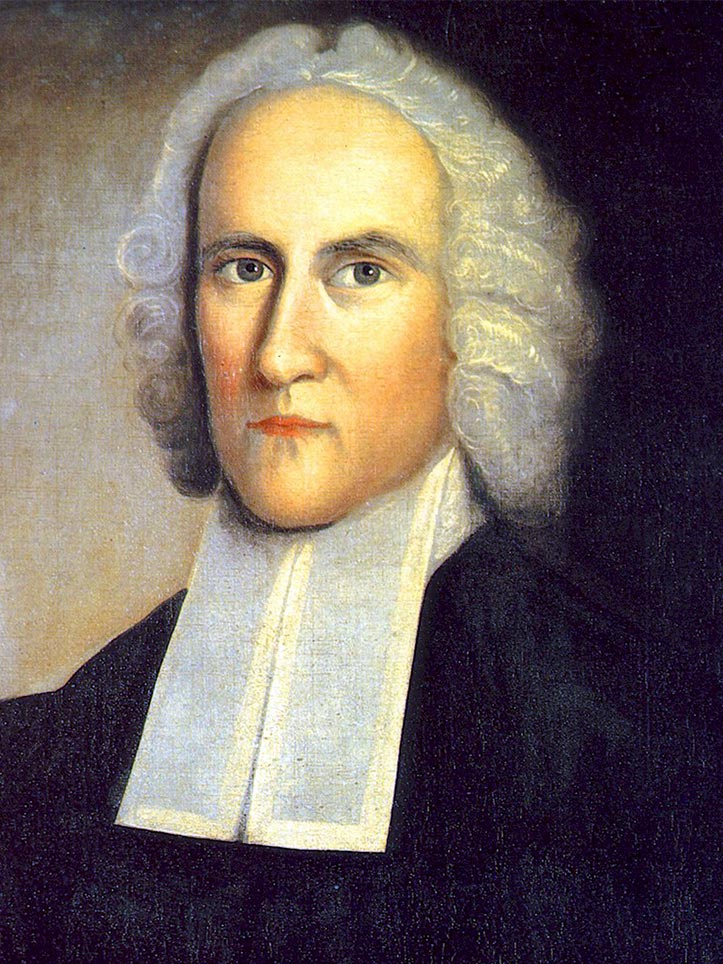 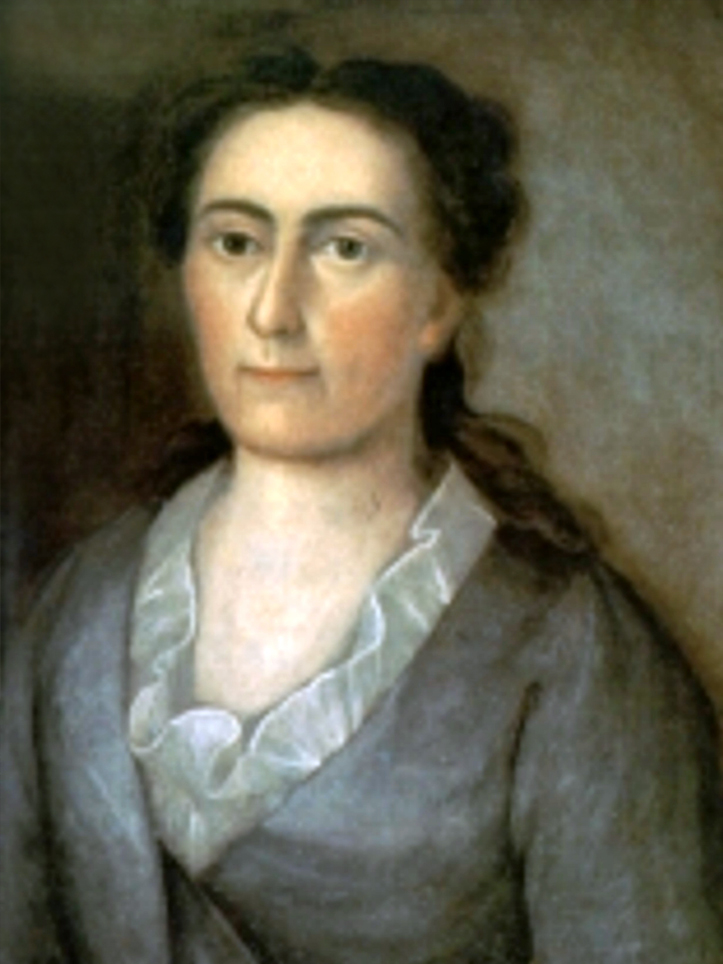 Edwards “employed no less than twenty metaphors or descriptive adjectives to express God’s wrath and hell’s torments”. Virtually everyone already firmly believed in hell as a place just as sure as was London. But many had grown cold to the reality, especially those who did not personally come to Christ for salvation. Edwards used the images of a pit, an oven, a mouth, a sword, a furnace, flames, a serpent, a troubled sea, black clouds approaching, waters dammed by a floodgate, a bow bent with an arrow ready “to be drunk with your blood”, an axe, and a heavy load that cannot be held. He reminded the congregation that they only lived through each night by God’s sovereign pleasure, and that He could justly send them screaming to hell at any moment. The most famous image of the sermon pictured God holding you over the pit of hell as one does a spider over the fire. He could let go at any moment, and you who are unrepentant would fall into the fire, lost forever. “O, sinner, consider the fearful danger you are in . . .” 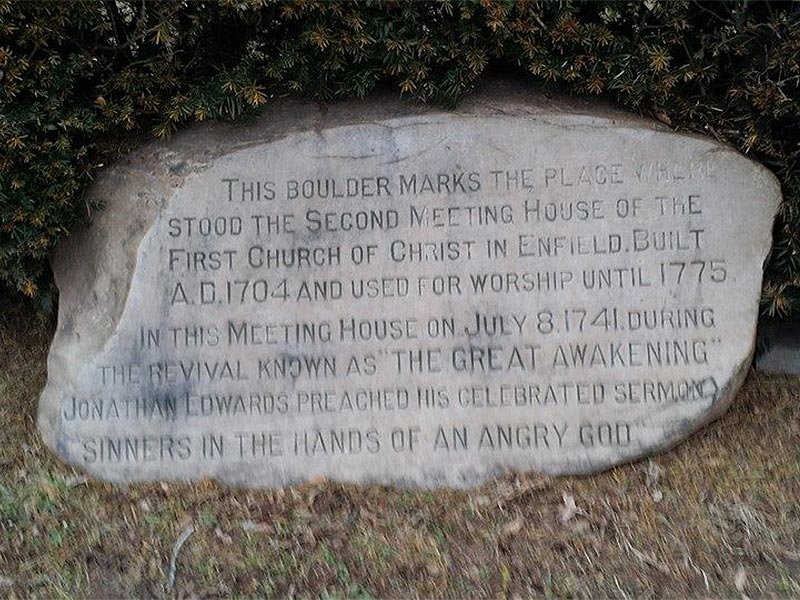 Pastor Edwards was unable to finish the sermon, given the outcry and torment of many souls confronted with their sin and its consequences. He closed the sermon and he and other ministers joined with the penitents to instruct them further. Edwards preached the sermon on several occasions in other churches with the same results, but with more sharing of God’s mercy and grace in the end. Though not all the images were specific quotes of Scripture, everything he said was true. The use of vivid metaphor and adjectives brought home to people’s hearts their precarious position before God.

This sermon has been studied and written about by scholars for all sorts of reasons, literary and philosophical. What the historian needs to remember is that it was accompanied by the movement of the Holy Spirit on hearts to bring salvation to lost souls.