“The wind blows where it wishes and you hear the sound of it, but do not know where it comes from and where it is going; so is everyone who is born of the Spirit.” —John 3:8

nside the Rotunda of the United States Capitol, eight magnificent 12×18 foot paintings depict some of the most important moments in American history. Four of them relate to the War for Independence, and three to exploration and settlement. One painting depicts a singular moment almost out of place with the other events of the colonial era: the baptism of the first known Protestant convert to Christianity in America — Pocahontas, the daughter of Wahunsennocawh, the paramount chief of Tsenacommacah, a confederacy of tributary tribes in the tidewater region of Virginia. Powhatan is the name given by the settlers to both the paramount chief and to his kingdom. 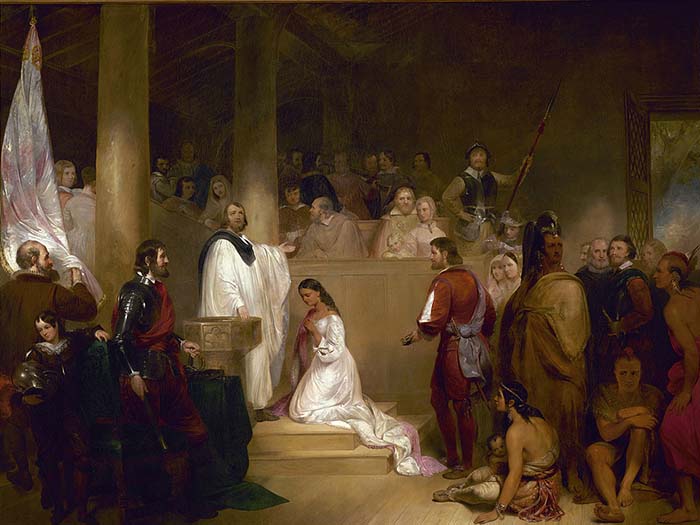 The Baptism of Pocahontas

The Jamestown settlement of 1607 suffered terrible losses in the first few years of the plantation. Starvation, disease, and hostile confrontations with local people resulted in the deaths of about 88% of the colonists in the first three years (440 out of 500). The efforts of John Smith to force the Englishmen to work and plant, and his ability to communicate with the local Powhatans for barter, and sometimes through theft, kept the colony alive. A major reason that Smith and his confederates succeeded was a result of a visit to Jamestown by Matoaka, most often referred to as Pocahontas, the young daughter of the king. She apparently served as a liaison and an interpreter between the colonists and the local natives. Smith recorded later that she saved his life on one occasion by interceding on the brink of his execution by the Powhatans. 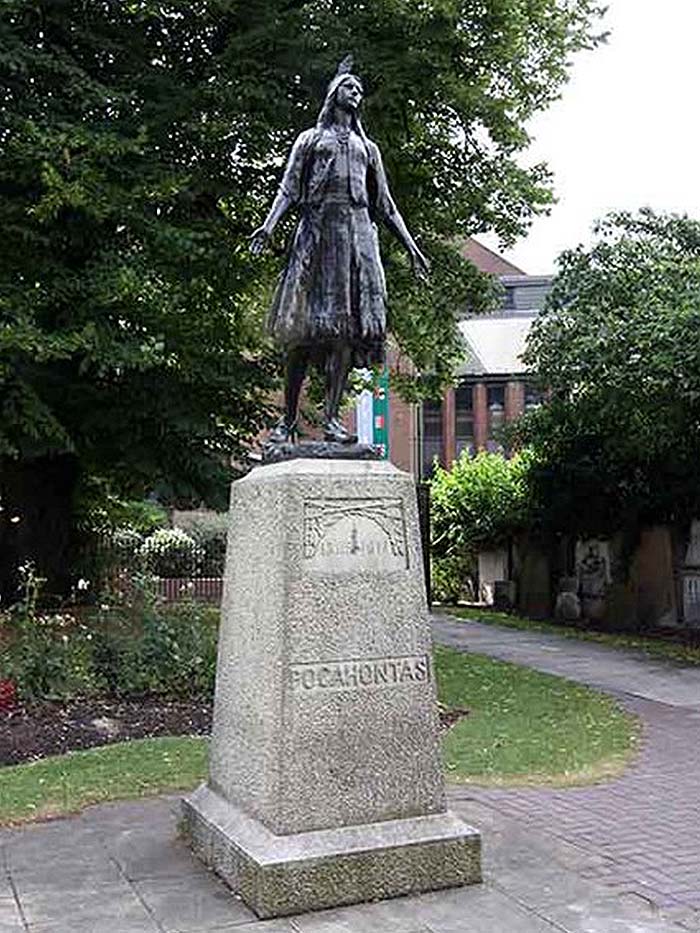 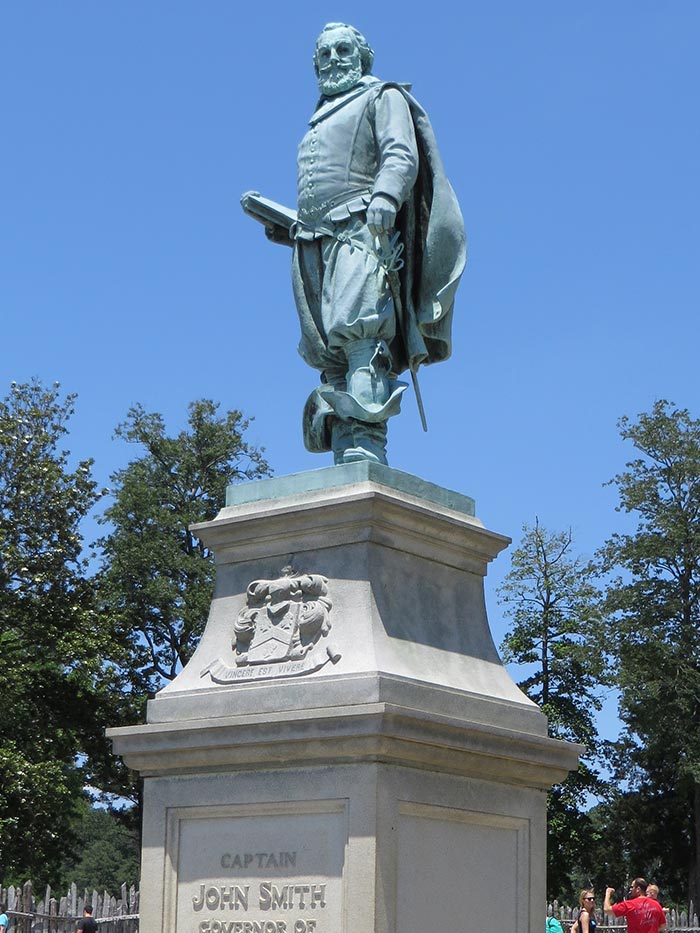 In a few years the colony stood on its own feet economically and began to thrive, especially with the introduction of tobacco cultivation. Englishman John Rolfe became one of the chief exporters of the “noxious weed”. In the course of time, he grew to love Pocahontas and sought marriage. The pagan religion of the natives presented a great barrier to Rolfe, for the Scripture prohibits being “unequally yoked”. Pocahontas agreed to catechizing and other instruction from the local pastor of the colony, and she came to faith in Christ. The seventeen-year-old Matoaka married John Rolfe in 1614 and a year later gave birth to a son named Thomas. In 1616 the Rolfe family sailed for England. She was given a “Christian” name, Rebecca, and due to her royal status became known as Lady Rebecca. After their introduction to King James and Queen Anne, it was recorded that the monarchs expressed their displeasure in the Rolfe marriage, since Matoaka was royalty and Rolfe but a merchant. 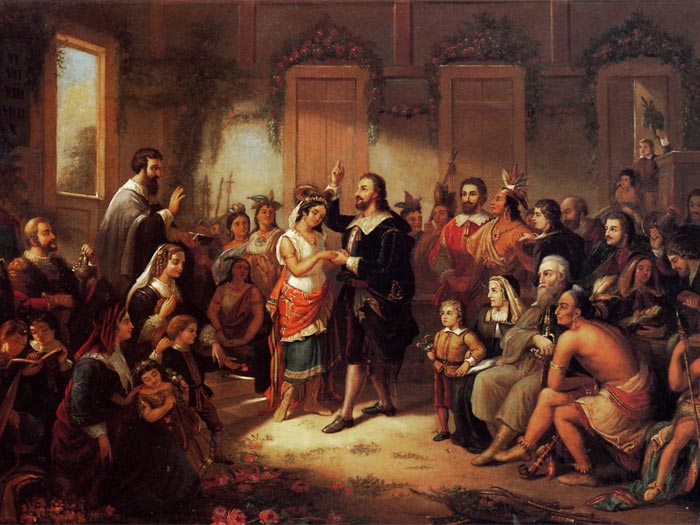 The Marriage of John Rolfe and Pocahontas, April 1614

Pocahontas contracted an illness aboard ship on the way back to Jamestown and died on the first day of spring in 1617; she was buried at the church in Gravesend, in a site now unidentified. Her son Thomas Rolfe lived on to marry and become the father of one daughter. Today, thousands of people can trace their lineage back to the Rolfes and thus to the chief of the Powhatans.

Although she was not considered royalty in the Powhatan culture, by English standards, Matoaka possessed royal blood. The conversion of queens and princesses contributed powerfully to the Protestant Reformation of the previous century in Europe. The promise of a royal convert in the first permanent English settlement of the New World reminded some Englishmen of the potential for great spiritual fruit of the Gospel among the native tribes. In the providence of God, the compelling story of Pocahontas did not result in a spiritual awakening among the natives in Virginia, but in just a few years, many among native tribes of New England responded to evangelism and established Christian communities of their own. 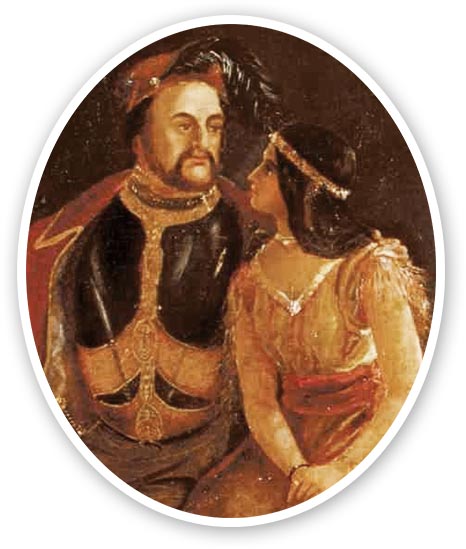 Portrait of John Rolfe and Pocahontas 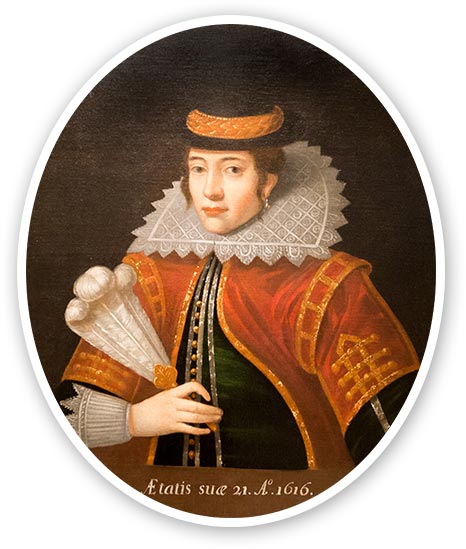 The great oil painting in the U.S. Capitol symbolizes much more than just an unusual baptism. Some interpreters of the art work, in fact, downplay its significance. Like Matoaka’s brother and uncle in the painting, with their backs turned, and likely regretting her identification with Christians, modern historians see it as a tragic moment that presaged the triumph of Protestant Christianity in North America. I have not seen the Disney cartoon film about Pocahontas, but I’m guessing the main message isn’t the triumph of the light of Christ over the darkness of paganism.

Join Us in Jamestown, Yorktown and Williamsburg!

Learn more about Pocahontas, John Rolfe and the remarkable Jamestown Settlement on our Virginia Historic Triangle Tour May 24-25.