“The kings of the earth set themselves, and the rulers take counsel together, against the LORD, and against his anointed, saying, Let us break their bands asunder, and cast away their cords from us. He that sitteth in the heavens shall laugh: the Lord shall have them in derision.” —Psalm 2:3-4

he French Revolution became the template for revolutions since the 1790s—especially in the 19th Century—and then its ideological heirs of the 20th. At first, men like the Marquis de Lafayette, hero of the American War for Independence, saw the rebellion in his native land as an opportunity to accomplish what the Americans had done—establish a constitutional republic, or at least make the crown answerable to a fixed law. The intellectual groundwork of revolution had been laid, however, in the preceding years, by the radical French Philosophes who promoted an agenda of very different goals and magnitude. This was going to be a comprehensive revolution, led by lawyers, bent on eradication of Christianity, monarchy, and aristocracy, committed to the enshrinement of democracy, social levelling, and the worship of man and his sovereign “reason.” The results, of course, created a monstrous and murderous tyranny far beyond anything the hapless King Louis XVI could ever have imagined, much less implemented, had he wanted to. The new “Republic of Virtue” even created its own religion for mass democratic man. 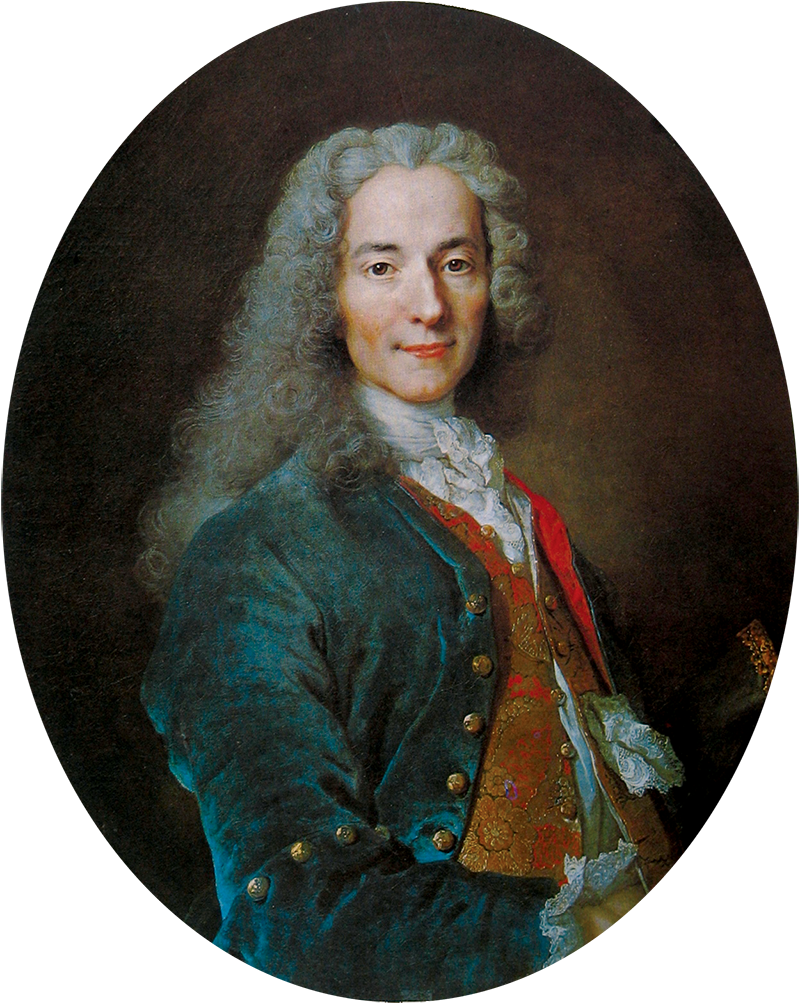 François-Marie Arouet (1694-1778), French Philosophe best known by his pen name Voltaire. Regarded by the National Assembly as a forerunner to the French Revolution, his remains were brought back to Paris and enshrined in the Panthéon. 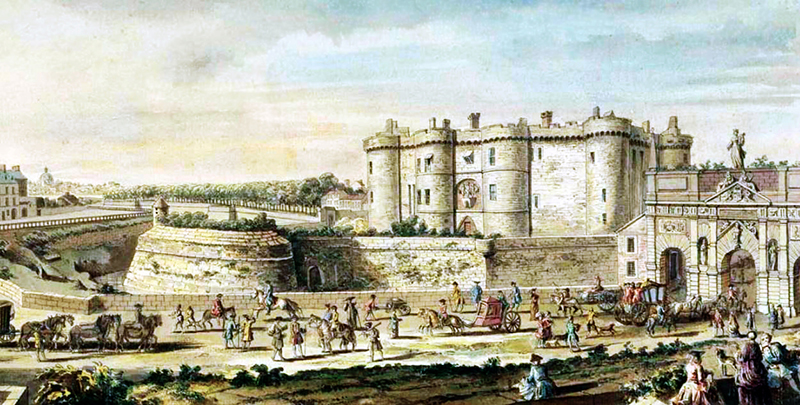 Although France was a leading nation of Europe—commercially prosperous, well educated, and militarily capable—“the old Regime did have one overriding problem that was unique, even unprecedented. French intellectuals, middle and upper classes had grown ashamed of their country, history and institutions. Such a phenomenon had never before arisen in any nation or race throughout the long history of mankind.” (Scott, p.6) The roots of the problem lay in the triumph of the so-called “Enlightenment,” with the main French Philosophes, led by Voltaire, bringing his vituperative attacks on the Church as religious superstition, and the state, which only promoted economic inequalities, and oppressed the poor. The philosophical efforts to destroy church, state, history, and social order took on new dimensions with the rise of Rousseau, a “writer with poetic gifts but whose mental balance teetered perilously close to lunacy.” An eccentric misfit, he detested all forms of hierarchy and especially “loathed excellence.” (ibid.) 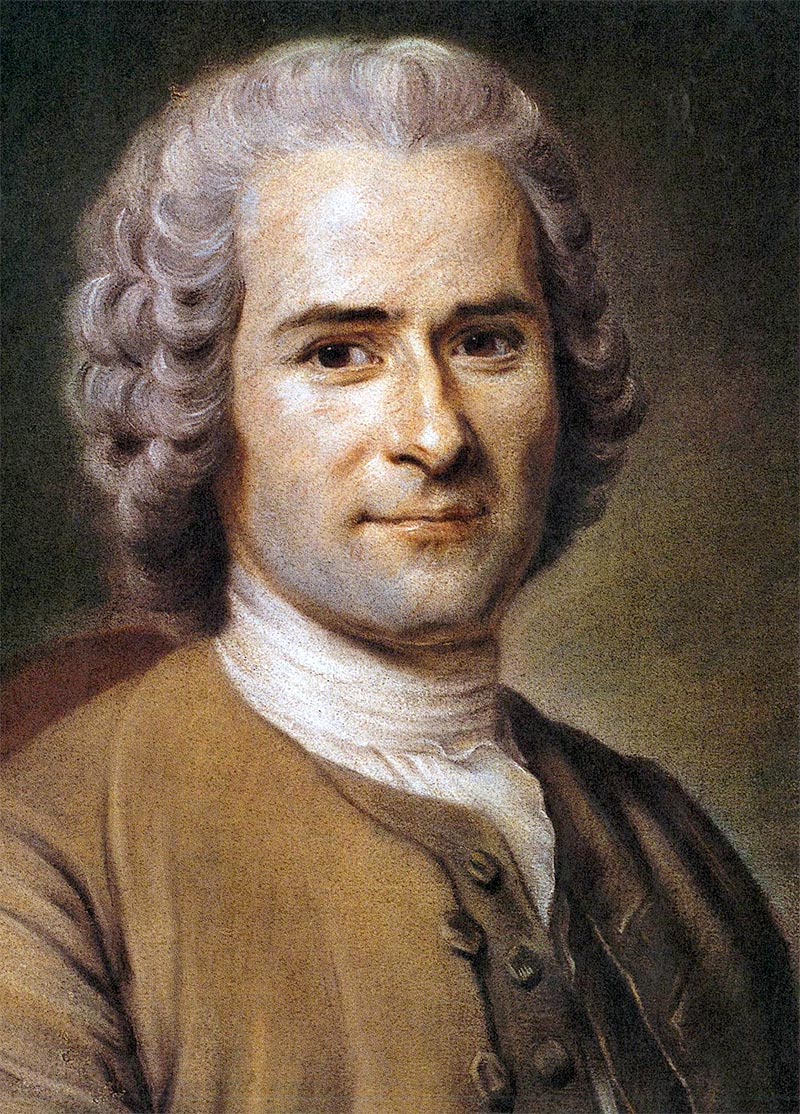 He and other French intellectuals elevated man’s reason to god-like status and pursued that historic folly of believing that a perfect society could be created by the state. Thus, a utopian mysticism ensnared the masses through the leadership of Enlightenment secular humanists. Real-world difficulties faced by the urban poor exacerbated the violent potential of the mobs of the streets, and their willingness to be led by radical thinkers brought an all-encompassing revolution to France, a revolt wholly unlike the civil war recently waged by Britain’s American colonies. What the Americans had sought—Liberty—was expanded in France to Liberté, Egalité, Fraternité, with liberty eventually falling by the wayside to “a new type” of radical equality and fraternity. A “secular surrogate” for religious belief developed among a sub-culture of literary intellectuals who were immersed in journalism and fascinated by conspiracies and ideology. 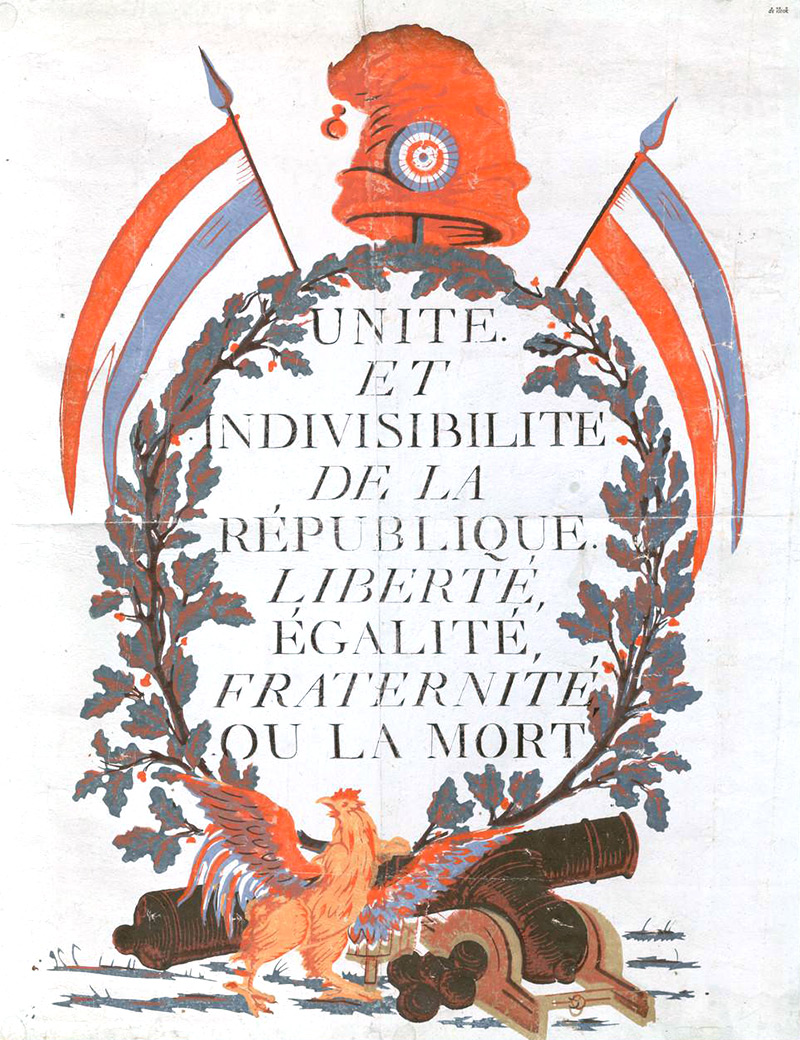 A 1793 propaganda poster features the slogan “Unity and Indivisibility of the Republic. Liberty, Equality, Fraternity or Death.” Symbols such as the tricolor flag, phrygian cap and the gallic rooster are also present. 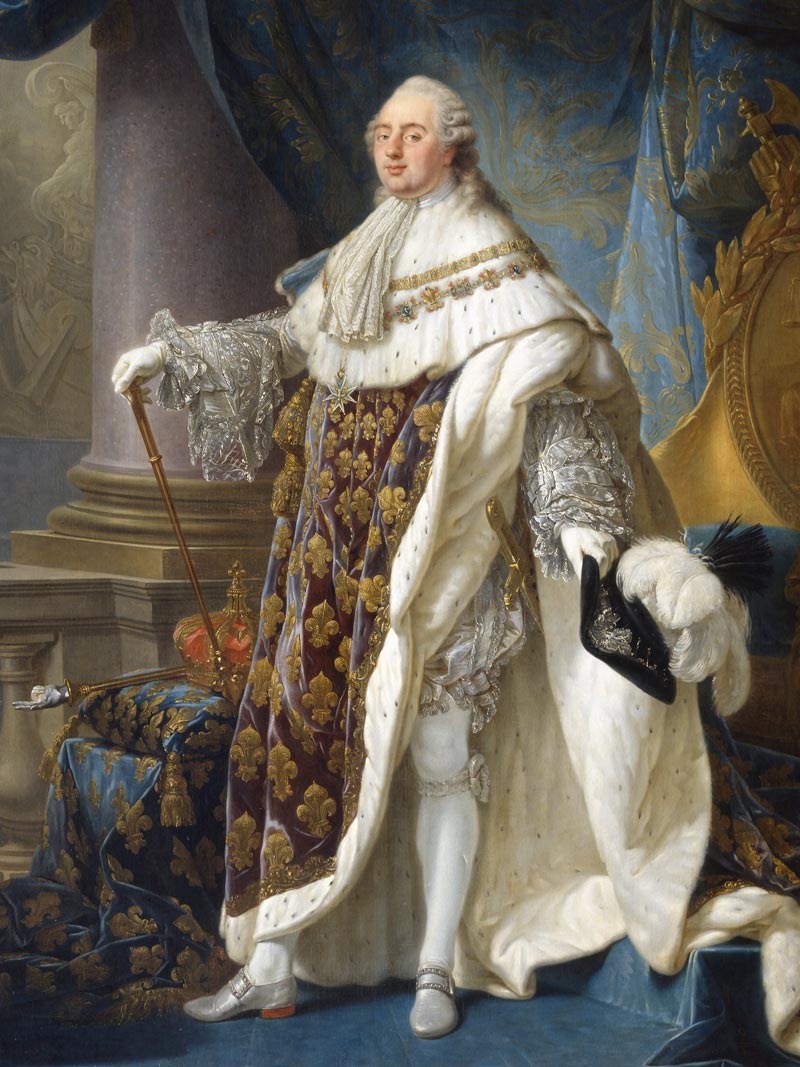 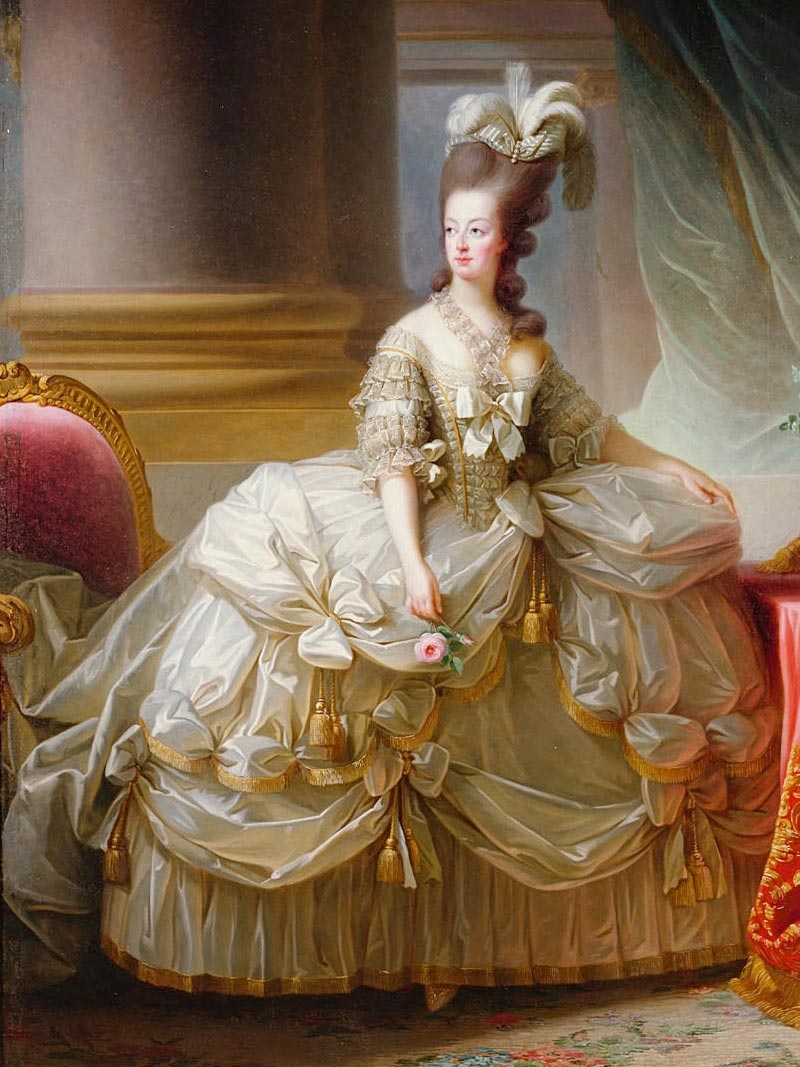 In five months—May to October, 1789—“absolute monarchy and aristocratic authority were overthrown forever in the most powerful kingdom in Christendom.” The decisive event of the period was the creation of the “Third Estate,” representing everyone but the clergy and aristocracy, and led by middle-class lawyers. They declared themselves the National Assembly, abolishing social stratification and guaranteeing equality for all Frenchmen, establishing a revolutionary Republic. The armed masses in Paris, rioting and killing, eventually overturned the elected assemblies and put the state in the hands of a revolutionary council, led by Maximilien Robespierre, the most radical political leader. Thousands of people of every class, including the King and Queen, were sent to the guillotine and beheaded. 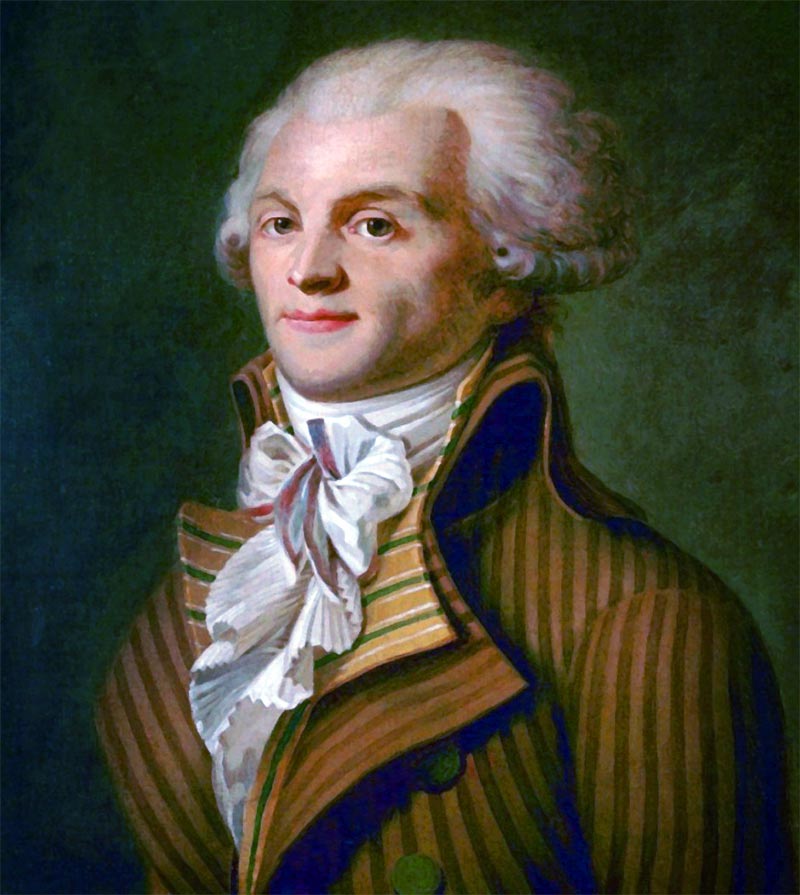 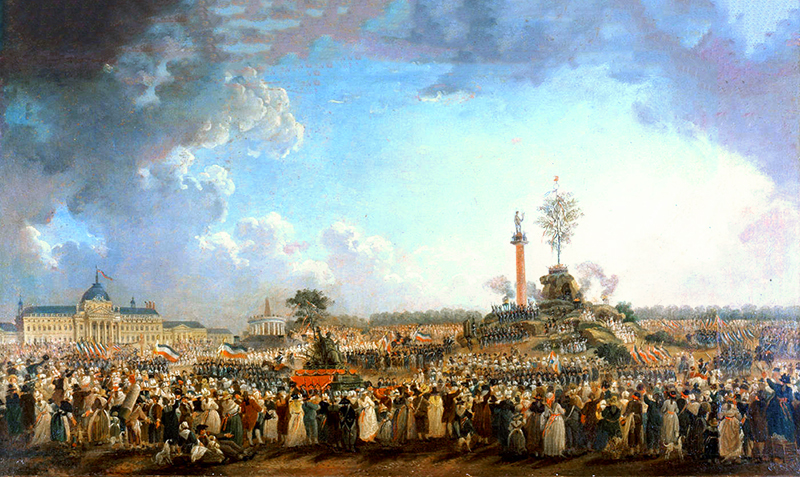 The Fête de l’Etre Suprême, or the Festival of the Supreme Being, June 1794

In June of 1794, Robespierre and the National Convention declared a new revolutionary religion, separated from the “superstition of Christianity”, but affirming a supreme being and immortality of the soul. Churches became the “temples of Reason” and priests were forbidden to teach. The “goddess of Reason” statue was erected at Notre Dame Cathedral, and the new Trinity worshipped: Liberty, Equality and Fraternity. As with all revolutions installing false gods, as Chesterton so poignantly observed, “Liberté, Equalité, and Fraternité soon gave way to Infantry, Cavalry, and Artillery.” Napoleon rose through the ranks of the Revolutionary Army to establish a dictatorship, which reasserted order and went to war with all of Europe. 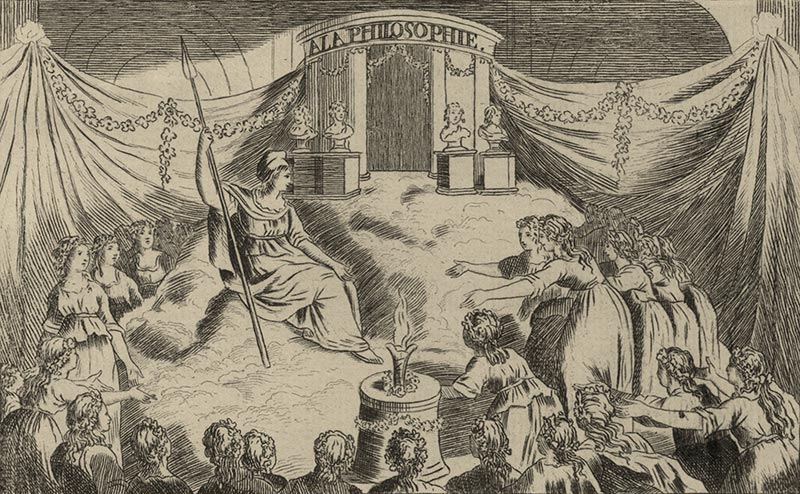 A depiction of the Feast of Reason, held at the Notre Dame cathedral in Paris 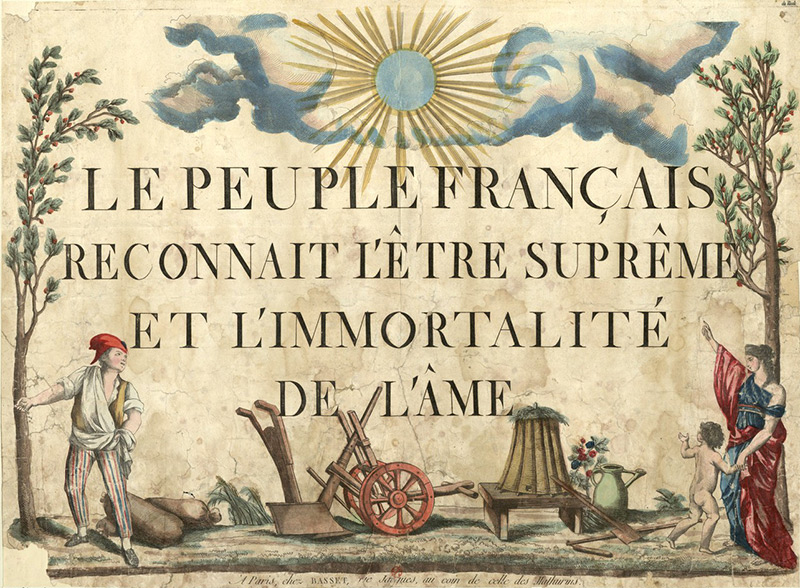 1794 standard of the Cult of the Supreme Being, one of the proposed state religions to replace Christianity in revolutionary France. Translated, it reads: “The French people recognize the Supreme Being and the immortality of the soul.”

As James Billington observed, “the city is the modern crucible of revolution. The revolutionary tradition, seen from below, is a narrative of urban unrest. . . . seen from above the revolutionary tradition is a story of elite, intellectual leaders.” (Billington, p.15, 16) How rightly the Puritans saw that “democracy is a poison” and a religion based on man’s law rather than God’s. “This democratic and social equality is nothing but the canonization of envy and the chimera of jealous ineptitude. This equality was never anything but a mask which could not become reality without the abolition of all merit and virtue.” (Count Charles Montelembert on the French Revolution)