“Thou shalt not be afraid for the terror by night; nor for the arrow that flieth by day.” —Psalm 91:5

This day is call’d the feast of Crispian.
He that outlives this day, and comes safe home,
Will stand a tip-toe when this day is nam’d,
And rouse him at the name of Crispian.
He that shall live this day, and see old age,
Will yearly on the vigil feast his neighbours,
And say “To-morrow is Saint Crispian”.
Then will he strip his sleeve and show his scars,
And say “These wounds I had on Crispin’s day”.
—Henry V, William Shakespeare

rispin and Crispian were Christian twins martyred for their faith c. 286 A.D. The Medieval Church added a feast day in their memory, later removed by the Second Vatican Council. Ironically, a number of battles in world history occurred on this day, the most important and best known of which was the Battle of Agincourt. The fact that it was fought on St. Crispin and Crispian’s Day was made famous in a speech that William Shakespeare has King Henry V deliver to inspire his troops on the day of battle. 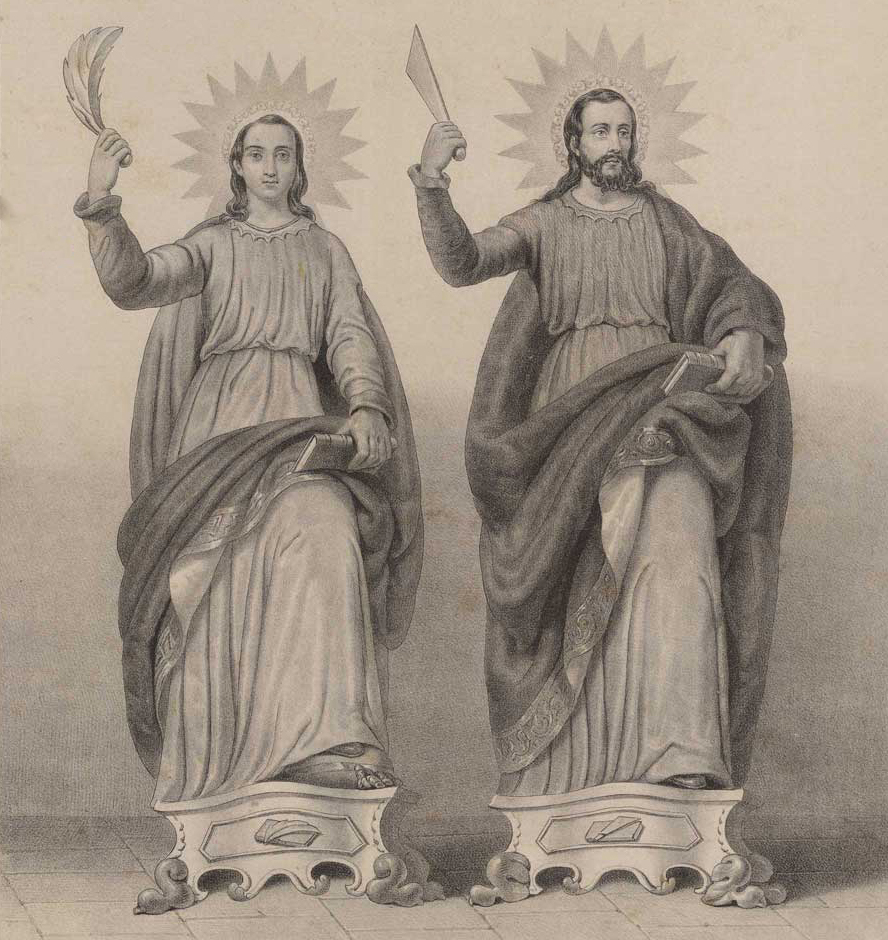 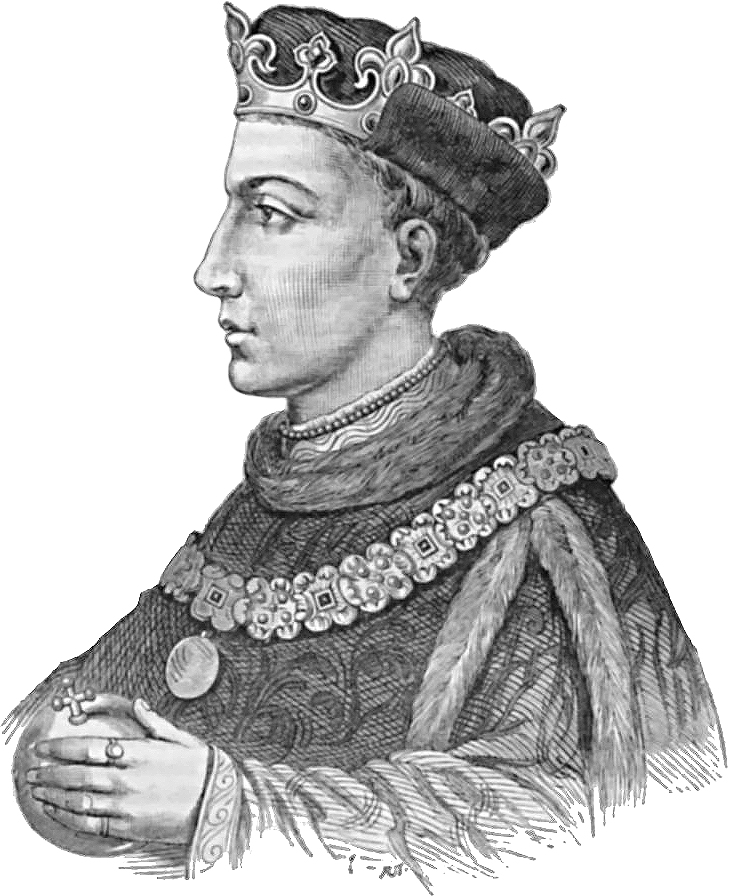 Twenty-seven-year-old Henry Plantagenet, of the House of Lancaster, served England as King for nine years (1413-1422). He developed a taste for war, fighting against Owain Glendower in Wales and at the Battle of Shrewsbury against the Percys, and when he succeeded his father on the throne, he continued war on France in the so-called “Hundred Years’ War” between the House of Lancaster and the House of Valois. Everyone in the know believed that Henry’s inferior forces were no match for the overwhelming military might of France, which included a powerful mounted force of knights—the greatest in Europe. 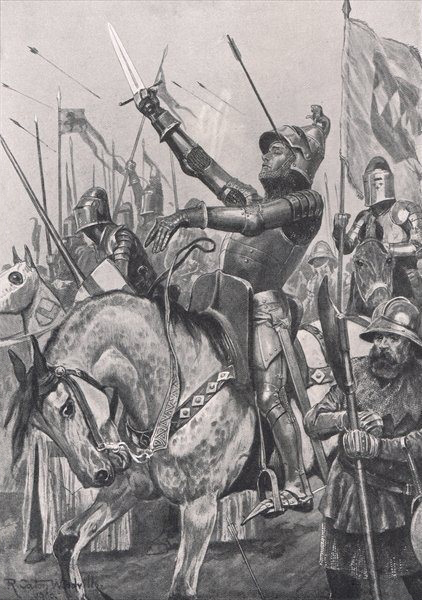 The death of Henry ”Hotspur“ Percy during the battle of Shrewsbury, 1403

King Henry decided on a campaign to recover land in France that he sincerely believed belonged to England. He marshaled his forces and sailed to lay siege to the port city of Harfleur. The city determined to hold out, hoping for relief forces, and the fight there cost the English three months, high casualties (about one-third of the total), and pushed the campaign further into the year, resulting in deaths from disease, and delaying the march into the rainy fall season. The King led his forces on a one-hundred-twenty-mile march, across several major rivers, trying to escape, finally closing ranks near a farm called Agincourt Village, as the French army cut off his route. 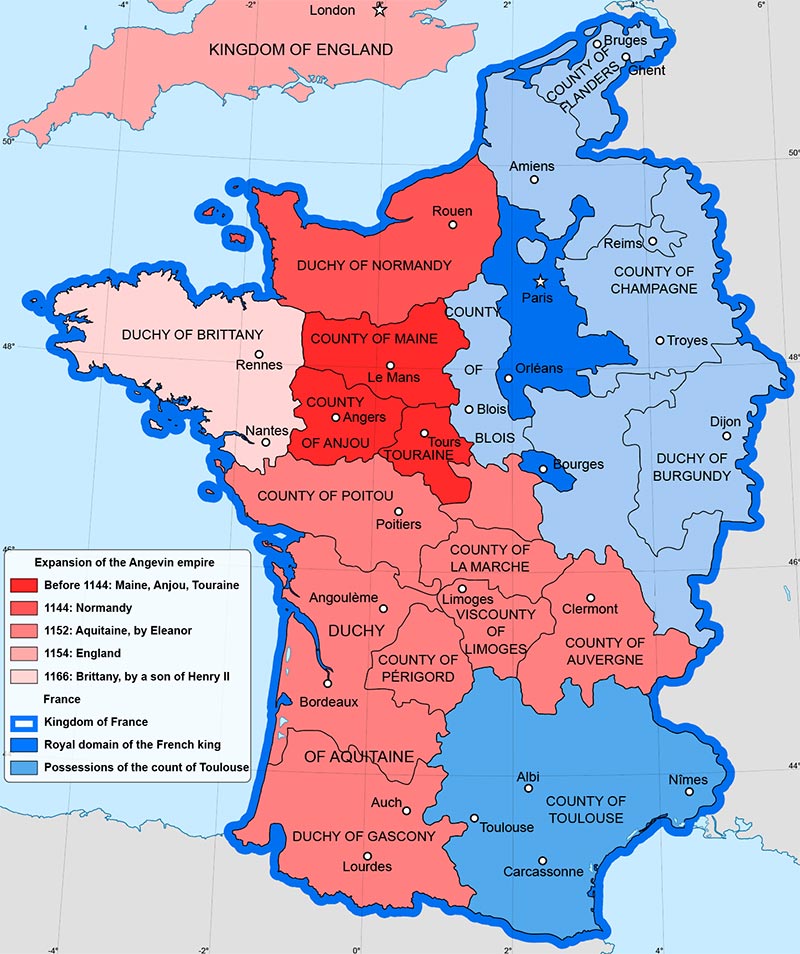 The night before the Battle of Agincourt, the English priests held Mass. The army received forgiveness for their sins and armed themselves for battle in the morning. Historians disagree on the exact number of combatants on the battlefield on October 25, likely about 6-7,000 English, mostly infantry, and 14-16,000 French troops, mostly knights and men-at-arms. Whatever the actual tally, the English were badly outnumbered, exhausted, and hungry. 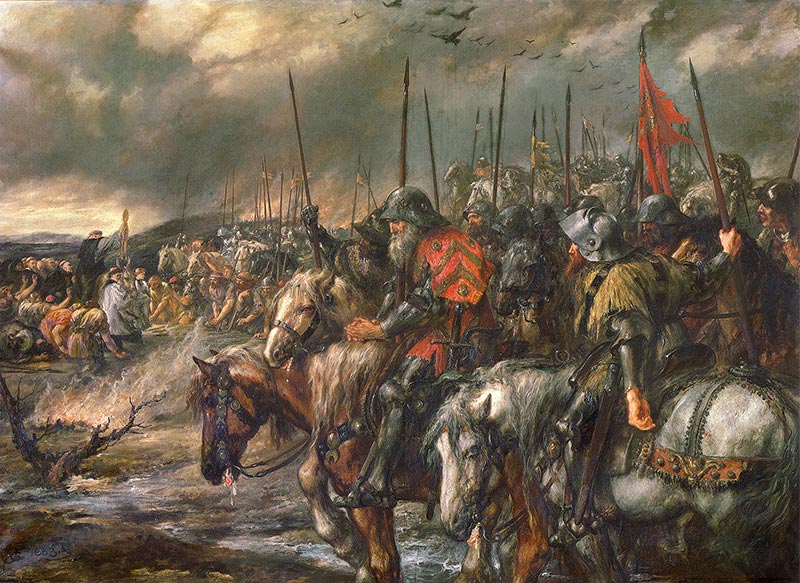 The morning of the battle

Henry arrayed his 1,000 or so men-at-arms in three lines, across wet fields between two forests, with about 5,000 archers in between. The battle itself is well documented—the English archers advanced and fired showers of arrows into the French battle line, causing the knights to resent the effrontery. The knights on their huge destriers, bred for battle, charged upon the compacted English line. The fire of the archers brought numbers to the ground, and as the heavily armored men at arms charged on foot, the wounded horses running from the field broke them up and trampled the slow. The casualties mounted as the Frenchmen fell in heaps across their front. The English longbowmen who had done such damage then grabbed axes, hammers, and swords and joined their own men-at-arms, attacking the masses of dying Frenchmen, struggling in the mud and slippery grass. The English had to climb piles of bodies to get at the secondary French attack. 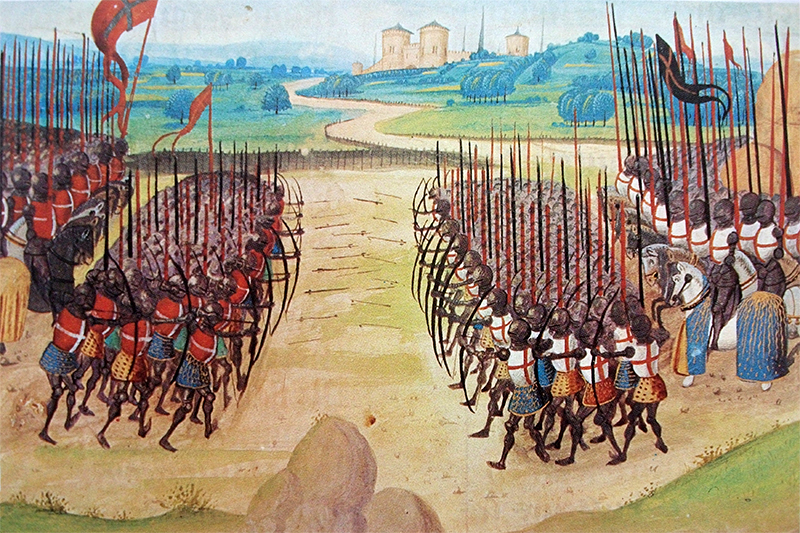 Sullen, captured Frenchmen were sent to the rear to await disposition. Henry, fearing an attack by the remaining unbloodied French infantry ordered the prisoners massacred, likely thinking they would take up fallen weapons and attack from the rear. A number of them died at the hands of their captors, thus depriving some of the soldiers of the ransom money they were hoping for.

When the battle finally ceased, the French abandoned the field, leaving behind about 6,000 dead, mostly nobles, including about 120 of the “Great Lords” of France, and 1-2,000 wounded and captured. The flower of the French nobility had been slaughtered on the field of battle. The English lost about 600 men. 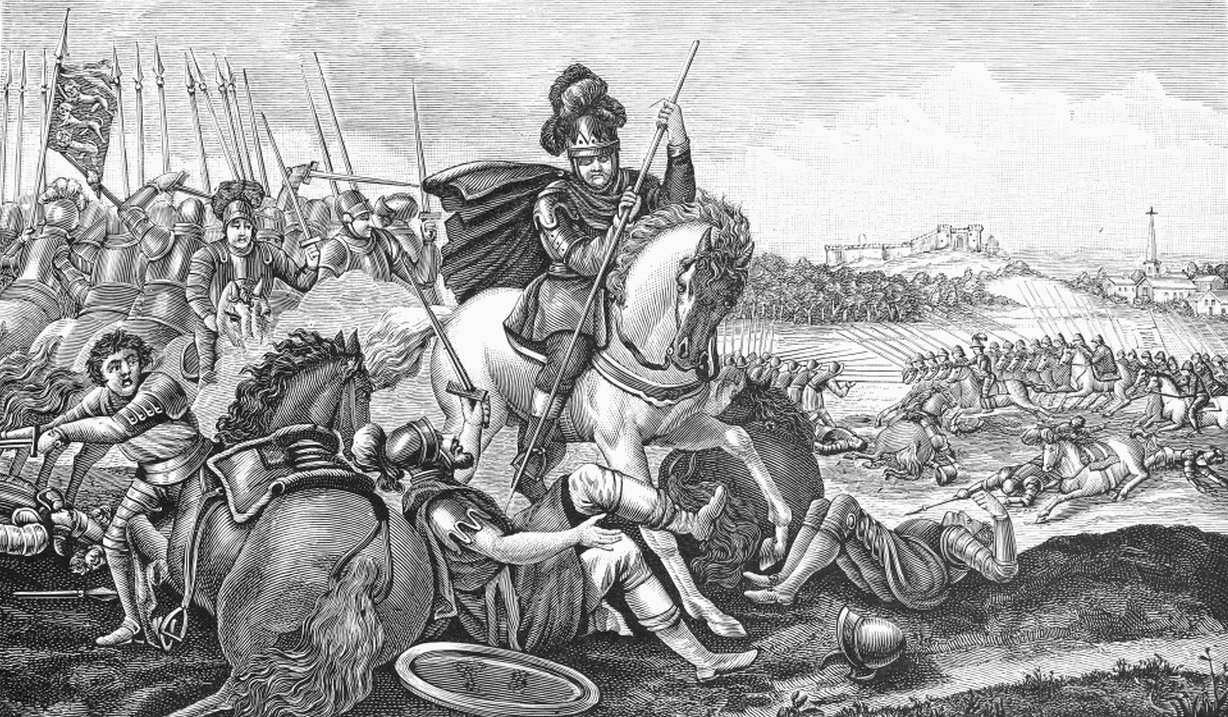 King Henry V at the Battle of Agincourt

The overwhelming victory of the English forced the King of France to come to terms with Henry V in a peace treaty which ultimately proved fragile. In the event, the two kingdoms continued the Hundred Years’ War again a few years later. Henry married the King’s daughter, Katherine of Valois, theoretically joining the two kingdoms for the future. But King Henry died two years later, and the king of France a year after that, leaving the nine-month-old infant Henry VI as King of England and France. He grew up to be, unlike his father and grandfather, “timid, shy, passive, well-intentioned, averse to warfare and violence”, and at times, “mentally unbalanced”. The old veterans of Agincourt could reminisce in a way their successors would not be able to: 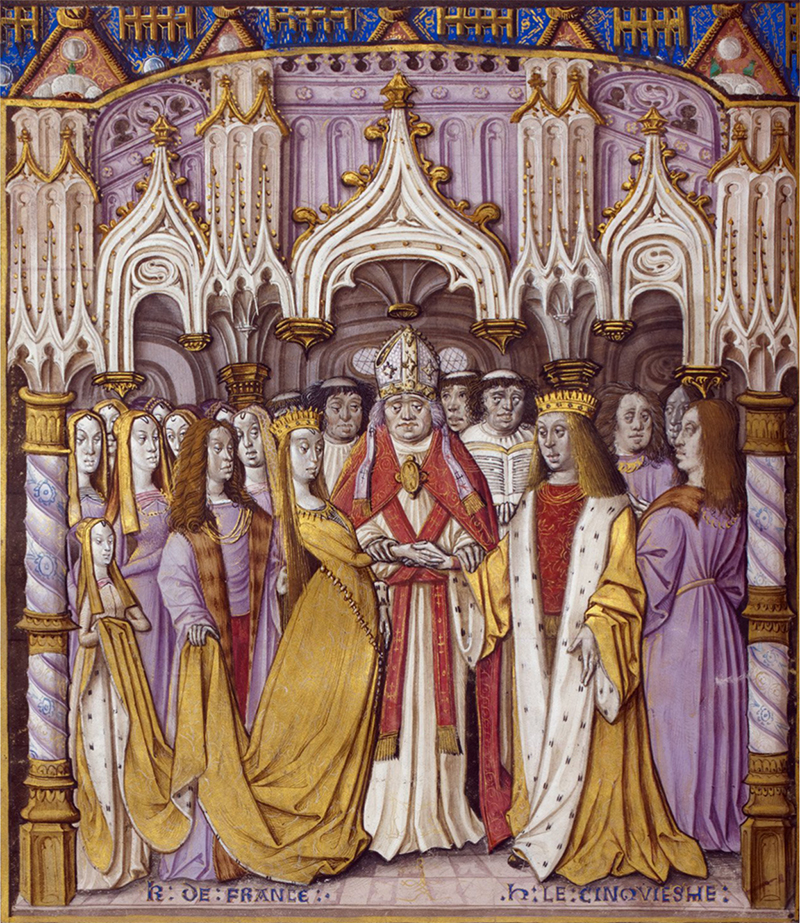 The marriage of Henry V of England to Catherine of Valois

“We few, we happy few, we band of brothers;
For he to-day that sheds his blood with me
Shall be my brother; be he ne’er so vile,
This day shall gentle his condition;
And gentlemen in England now a-bed
Shall think themselves accurs’d they were not here,
And hold their manhoods cheap whiles any speaks
That fought with us upon Saint Crispin’s day.”