“Many plans are in a man’s heart, but the counsel of the Lord will stand.” —Proverbs 19:21

dmiral Horatio Nelson, England’s greatest living war hero, sent his last communication to the fleet. They were about to engage the combined naval forces of France and Spain in the Napoléonic War showdown at Trafalgar, off the coast of Spain near Cádiz. “England expects that every man shall do his duty.” It would prove to be one of the most important battles — some military historians think the MOST important battle — of the 19th century. At stake was the planned invasion of England by the mightiest army ever assembled on the European Continent, and it would establish for more than a century whose naval forces would control the world’s oceans. The British seamen did their duty. 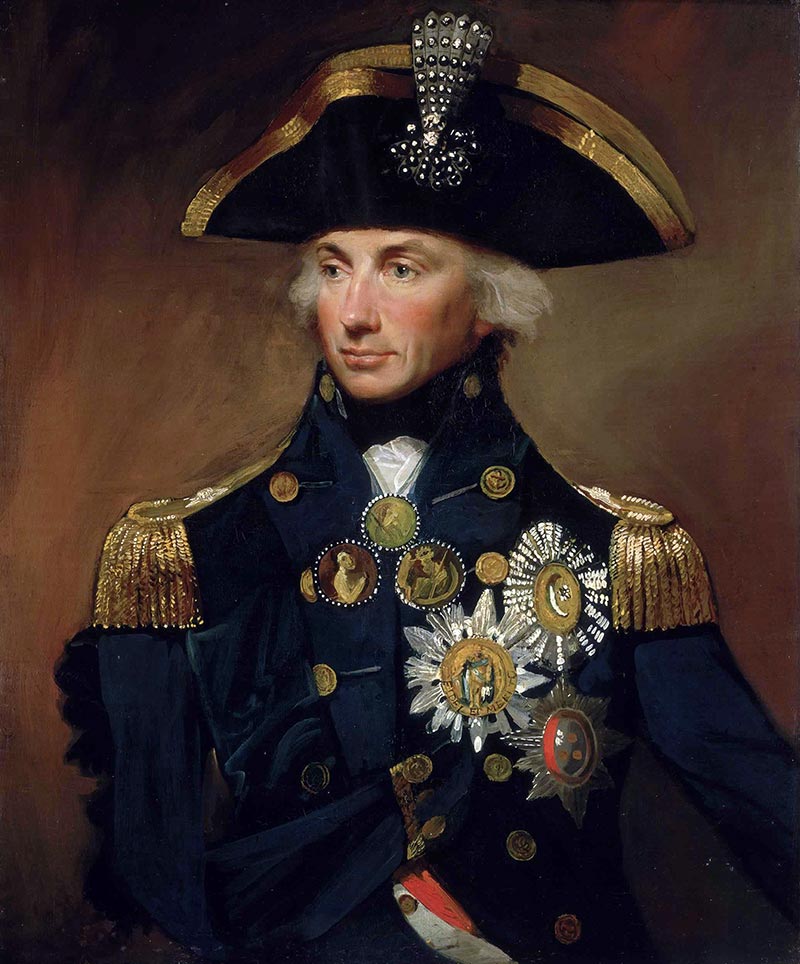 Napoléon Bonaparte brought order out of chaos and established financial and social stability to France in the late 18th century. His powerful, almost irresistible army and allies, would be personally led by him through a series of wars lasting till 1815 against flexible coalitions including the armies of Austria, England, Prussia and Russia. In 1804 he declared himself First Emperor of the French, and planned an invasion of his foremost rival, Great Britain. The English Navy had proven itself against Napoléon’s naval forces six years earlier at Aboukir Bay in what has since been called the Battle of the Nile, in Egypt. The hero of that engagement was Rear Admiral Horatio Nelson. His powerful fleet now confronted the combined fleets of France and Spain in the ultimate showdown at sea. 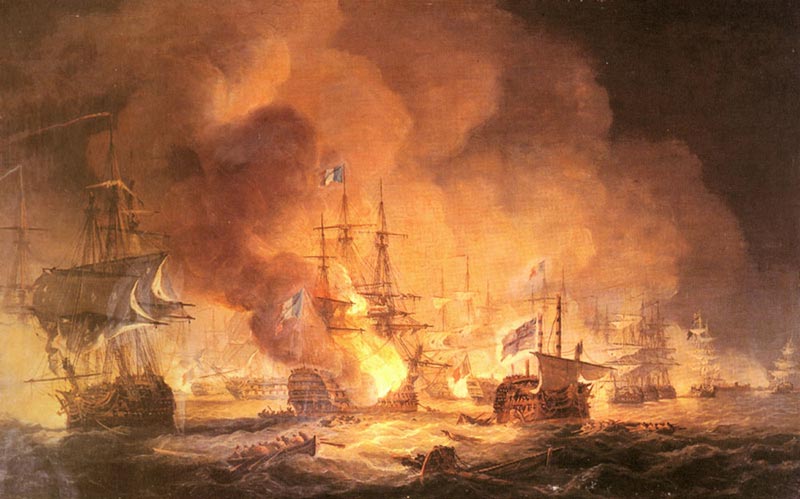 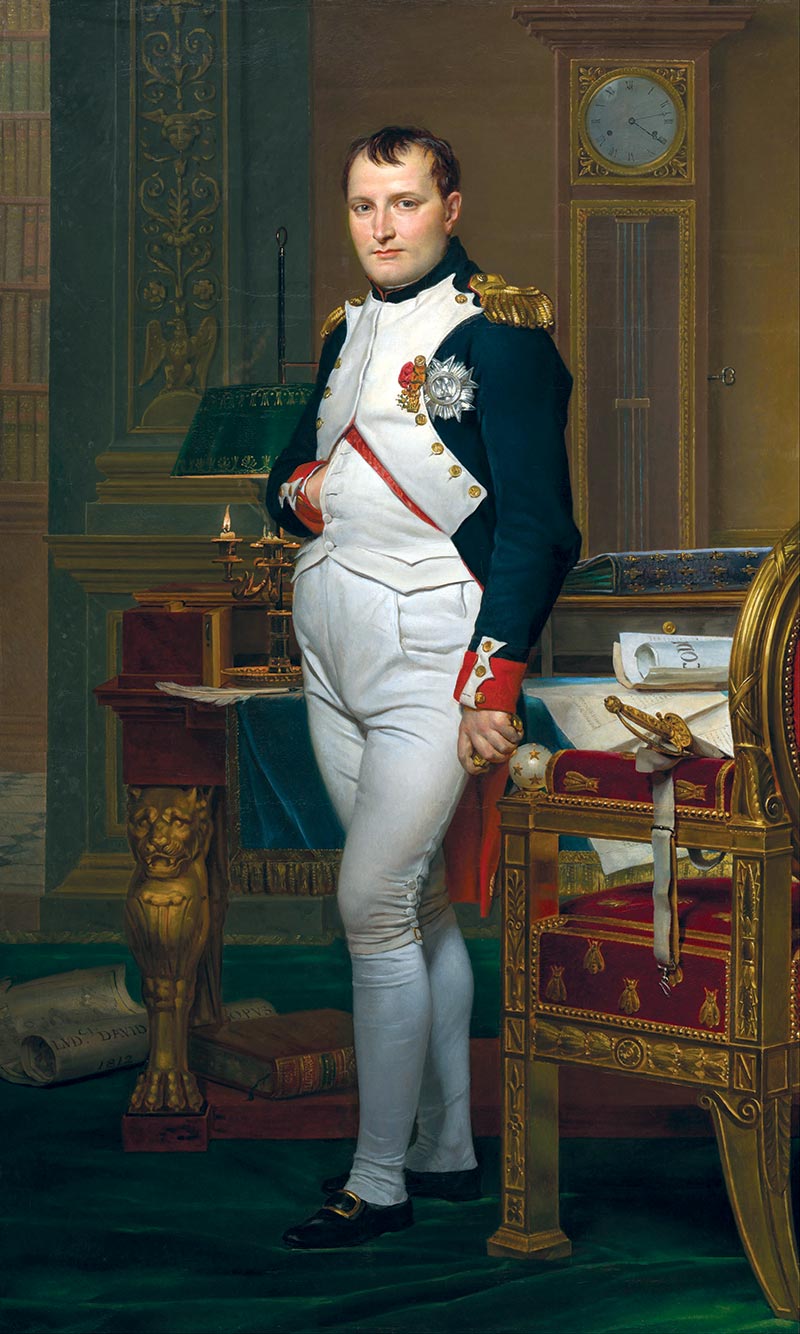 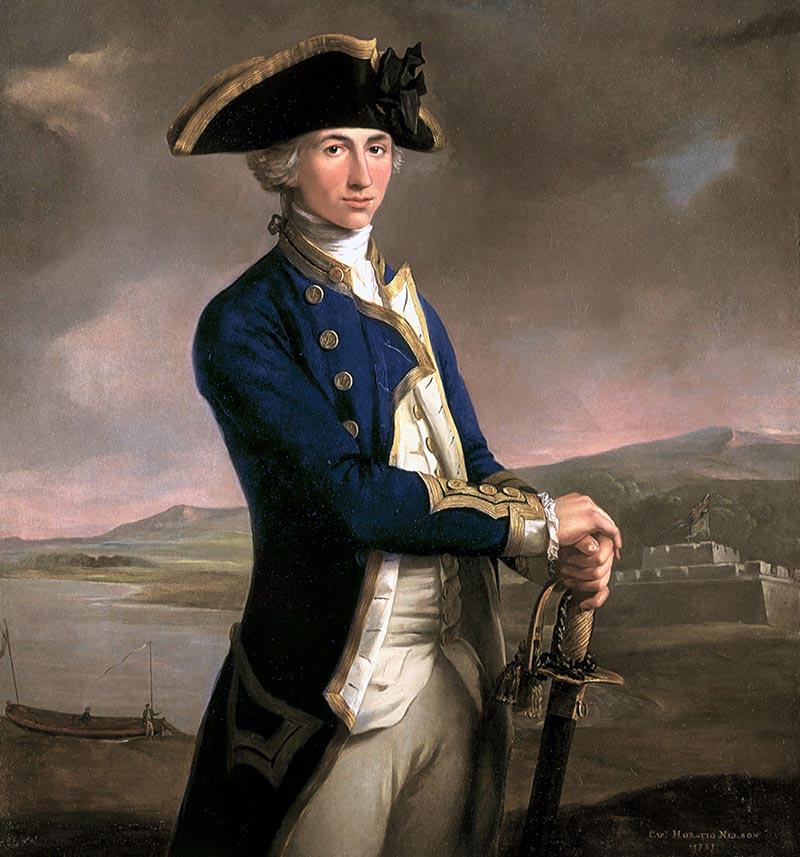 A young Captain Nelson in 1781

Lord Nelson began his naval career as a common seaman under his ship captain uncle. Nelson served in the Navy against the rebellious American colonies and had risen through the ranks to take command of his own ships, serving in the Caribbean, Mediterranean, Indian, and the Atlantic Oceans. His style of leadership, and the way he fostered the admiration of those serving under him, became known as “the Nelson touch.” He lost an arm in one battle and was struck over the eye in another, but each time recovered sufficiently to continue his career. Nelson’s leadership in the destruction of the French fleet at the Nile in 1798 proved that he was the greatest captain of the era.

The Royal Navy blockaded the French coast, severely limiting France’s trade with foreign powers and crippling Napoléon’s ability to expand his naval forces. He determined to invade England in 1805, as a new coalition combined to once again try to stop Bonaparte’s imperial pretentions. Troopships could not make the jump to England due to the Royal Navy’s control of the channel and the oceans. The French and Spanish fleets, operating out of Spanish and Mediterranean ports hoped to break the blockade, rendezvous in the Caribbean and draw the English away from the European shores. Their captains were not enthusiastic about confronting Nelson, whose undefeated streak had been at their expense. Their fears were not displaced. 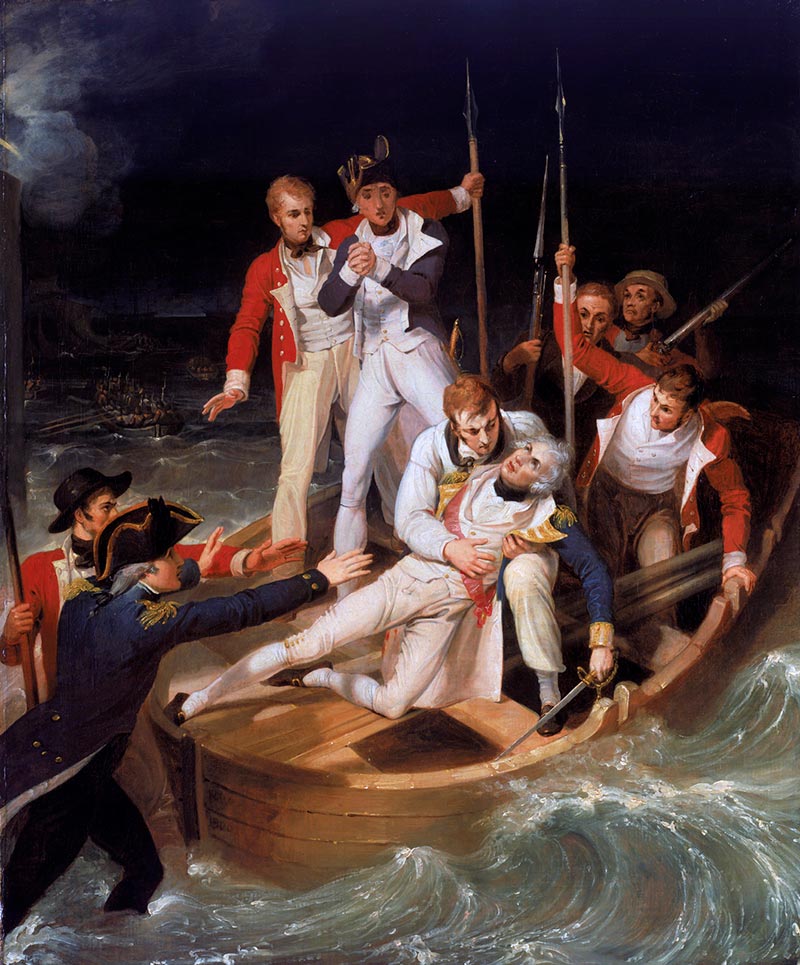 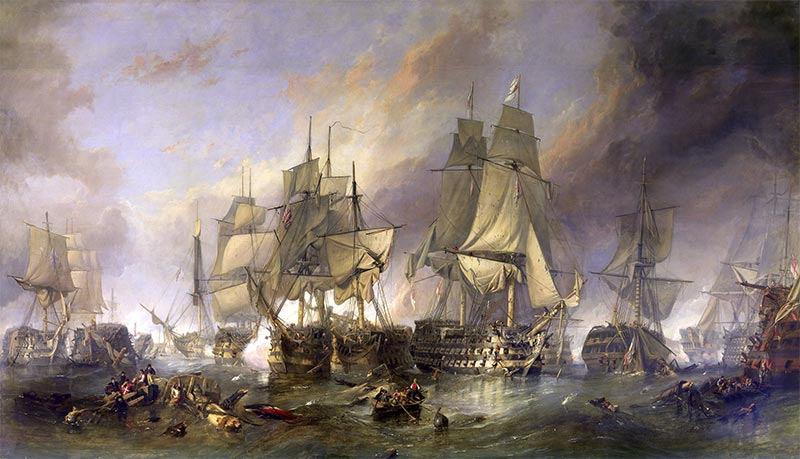 The opposing fleets met off the coast of Spain and fought the decisive Battle of Trafalgar. Nelson ordered a rarely-used approach of attack, striking the enemy line at perpendicular angles rather than the line of battle, in which ships in parallel lines exchanged broadsides. The combined fleet outnumbered the English thirty-three to twenty-seven in ships of the line, but Nelson’s plan proceeded to divide up the enemy ships, and superior British gunnery reduced a number of the opposing vessels to splinters. In close-in combat, lashed to the rigging in his flagship HMS Victory, Nelson was shot and mortally wounded, while directing the battle. Among his last words were “Thanks be to God, I have done my duty.” The British were victorious, although their most important naval hero of the age was killed at the very moment of his greatest glory. 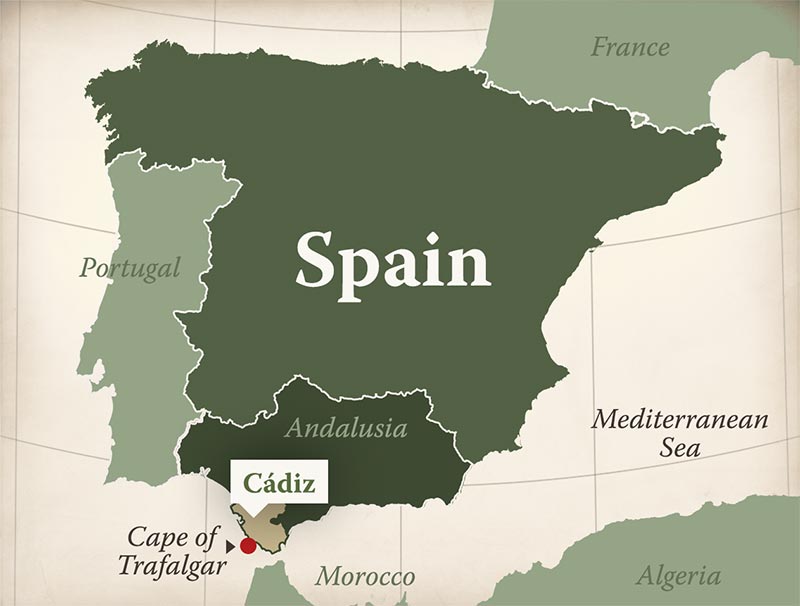 The battle was fought off the southwest coast of Spain, just west of the Cape of Trafalgar

England’s navy dominated the high seas from Trafalgar until World War II. Viscount Nelson was interred at Westminster Abbey, the greatest war hero of British history — his statue gazes out atop the great column, looking over London from Trafalgar Square, to this day. 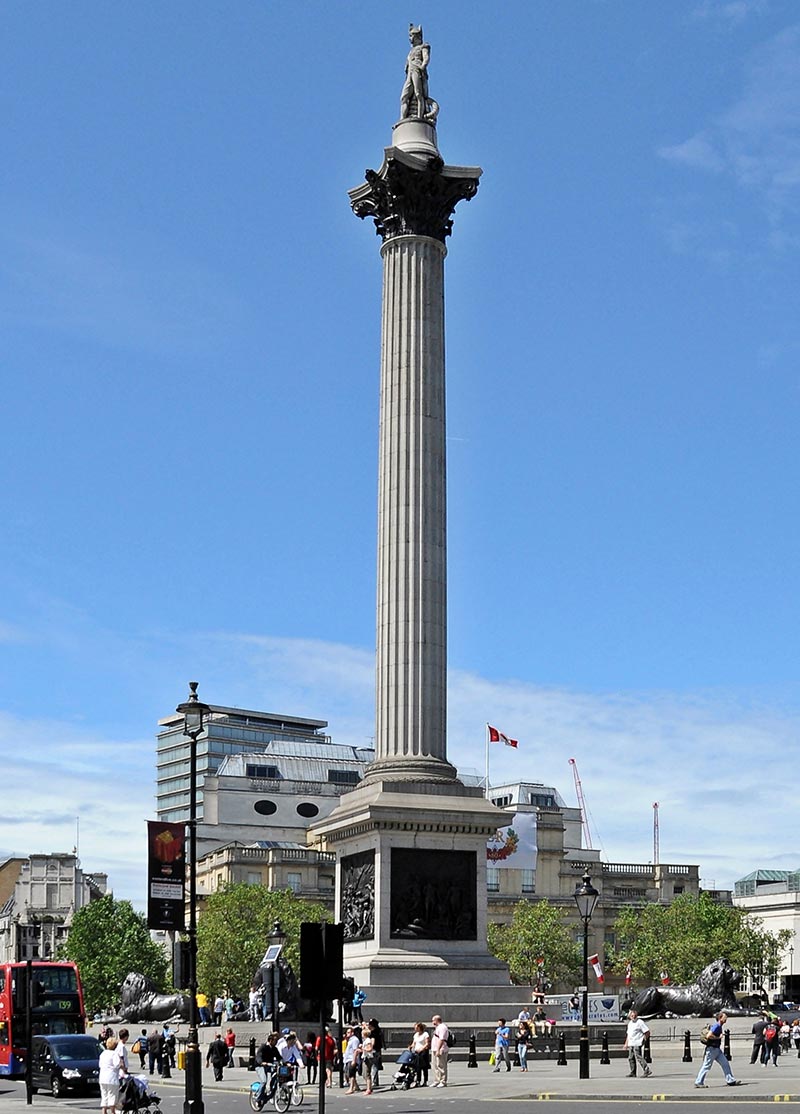