The Men of Scotland’s Past: John Knox 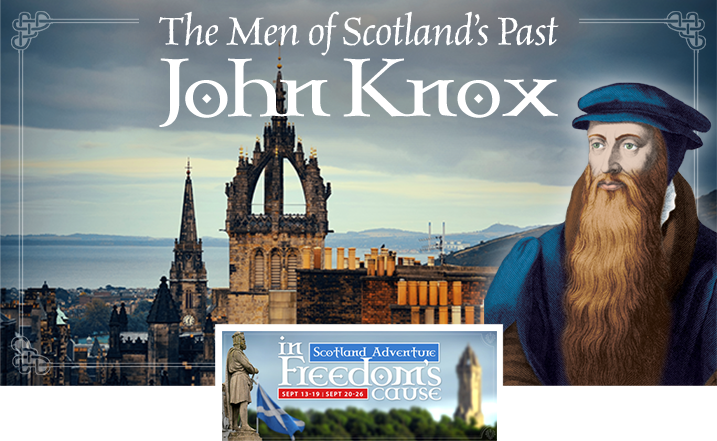 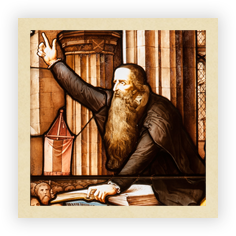 raduates accepting their diplomas at the University of St. Andrews are whacked with the “pant-leg of John Knox.” I once asked a student the day after his graduation if he knew who John Knox was. He said he thought it was “someone who graduated from the college a long time ago and did well for himself in the real world.” I propose that that St. Andrews student be given the Understatement of the Year Award, if there is such a thing. John Knox, by the Grace of God, shook Scotland and the world in a way that extended the Protestant Reformation into the next four hundred fifty years.

Like most great reformers of the Church, Knox was a priest seeking a much closer conformity to the Word of God in belief and practice. A friend and disciple of the martyr George Wishart, Knox was seized by the French and made a galley slave, surviving to become a royal chaplain to Edward VI, the new English king, in 1549. Deeply affected by the Protestant Reformation, Knox sought to bring more biblical worship practices to the English Church. With the death of the young King, and his replacement by Mary Tudor, Knox fled to Geneva, Switzerland when “Bloody Mary” re-instituted Roman Catholicism in England, and began the burning alive of reformers.

Knox pastored churches of Marian exiles in Frankfurt and Geneva, and learned from John Calvin and other reformers. Two sons were born in Geneva to Knox and his wife Elizabeth Bowes and he honed his preaching and teaching skills in “the most perfect school of Christ that ever was in the earth since the days of the apostles.” Knox returned to Scotland for the second time, entering a country that had embraced the Reformation but suffered under Mary of Guise, the Dowager Queen of Scotland. Knox’s fiery sermons galvanized the Protestants to resist popery, bringing the wrath of the Queen upon him. The Reformation in Scotland may have had a short history had not a number of nobles embraced the Reformation and with it, John Knox. Although hated and hunted, Knox was protected by powerful political interests, and when the Scottish nobility deposed Mary Guise from the regency, Knox became the leader of the Kirk.

For two years, beginning in 1560, Knox and the Parliament led the whole nation into Reformed Presbyterianism. Congregations were given the power to call their own pastors, the bishops were replaced, Knox wrote a new Confession of Faith and Book of Discipline and the Mass was made illegal. When Mary Queen of Scots, the rightful heir to the Scottish throne arrived in 1561, the conflict between Knox and the Queen began its stormy career, which lasted until her abdication in 1566.

After the death of his first wife, the fifty-year-old Knox married seventeen-year-old Margaret Stewart, ironically a distant relative of Mary the Queen. His ministry in Edinburgh and around the nation continued with great effect until after he completed his greatest work, A History of the Reformation in Scotland, and preached the coronation sermon of James VI (the future James I of England) at Stirling.

His death in 1572 passed almost unnoticed and his grave today is under a parking lot behind his beloved St. Giles in Edinburgh. The Regent of Scotland, James Douglas pronounced at Knox’s burial “Here lies one who never feared any flesh.”

The Lowlands Leg of our In Freedom’s Cause Tour will include stops in Edinburgh at the John Knox home and St. Giles Church, as well as St. Andrews where Knox’s mentor, George Wishart was burned at the stake.