“From whence comes wars and fighting among you? Come they not hence even from lusts that war in your members?” —James 4:1

n December 29, 1845, The Republic of Texas became the 28th State of the United States. The legislation admitting Texas did not define the borders of the new state. The government of Mexico protested loudly that Texas was still a Mexican state, although the Texians had revolted ten years earlier and defeated the Mexican army to secure their claim of independence. The Texans asserted that their southern border extended to the Rio Grande River. Mexico claimed that the Texas boundary ended at the Rio Nueces, two hundred miles north of the Rio Grande. A patrol led by Captain Seth Thornton along the river triggered a war that changed American history. 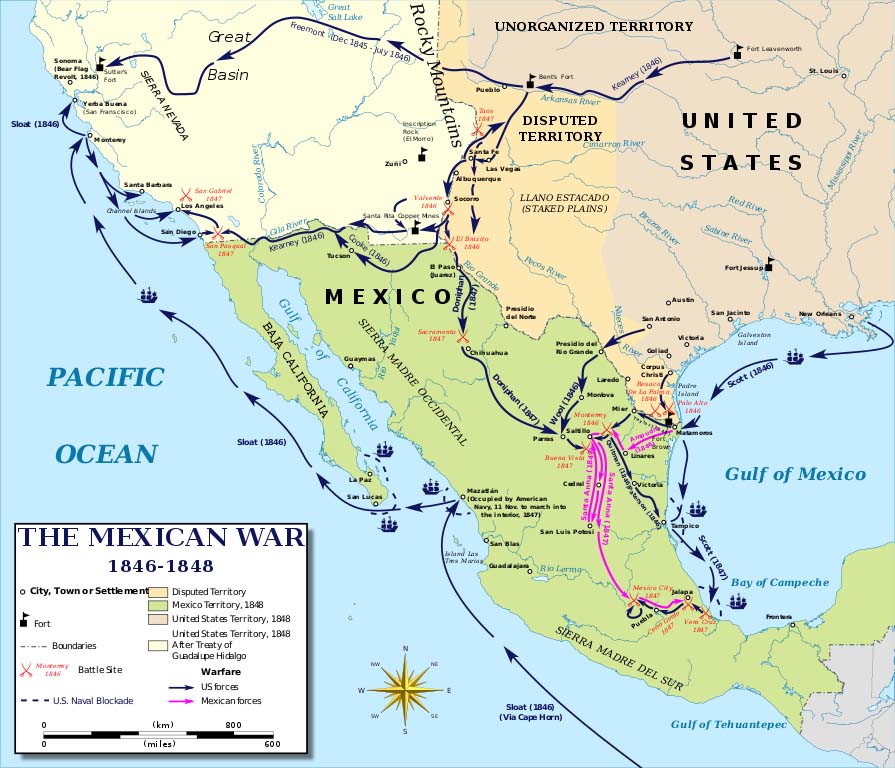 Map of the Mexican-American War

After Texas joined the Union, Mexico withdrew diplomatic relations. In August, 1845, President Polk sent (future President) General Zachary Taylor with about 4,000 soldiers to what is now Corpus Christi, just inside the disputed territory. In December, Polk sent an emissary to the latest President of Mexico, General José Herrera, offering to pay the three million dollars in claims by Mexican citizens against Texas and to purchase northern Mexico for another 25 million, an offer rejected by Herrera after it was leaked to the Mexican press, who screamed for the President’s head if he went along with the plan. Instead, he sent General Mariano Paredes with 8,000 troops (who had defeated and deposed the previous President, Santa Ana) to prevent American troops from invading Mexico. Paredes marched to Mexico City and installed himself as President. 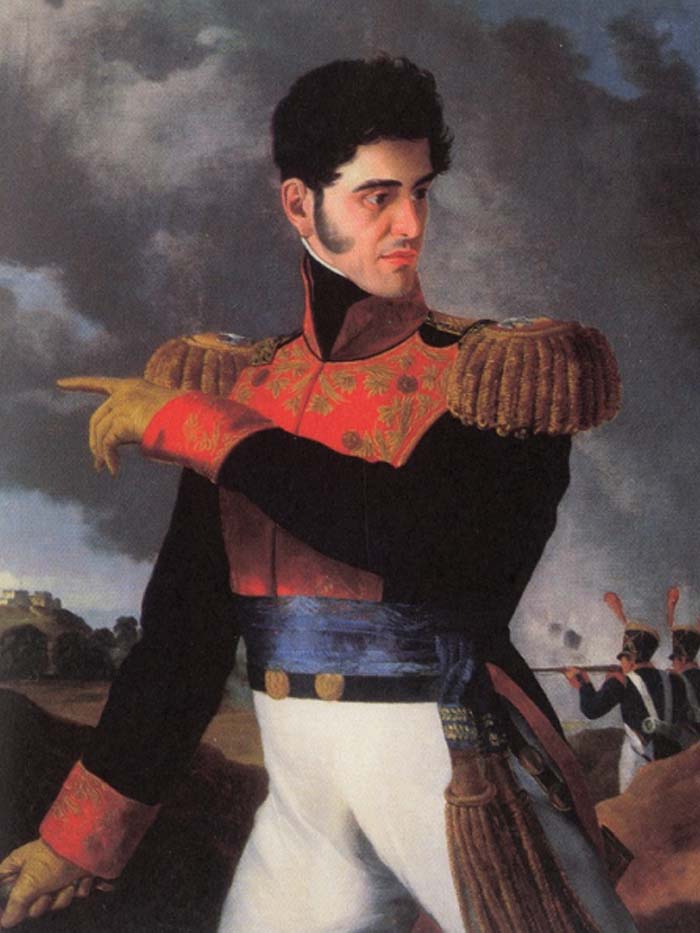 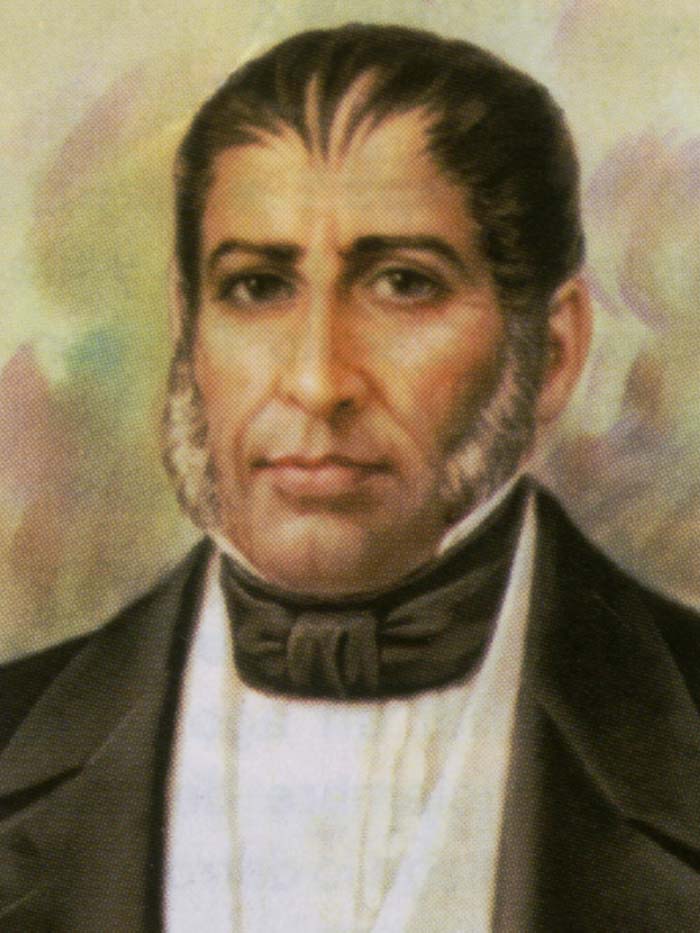 On March 8, Polk ordered Taylor to march to the Rio Grande. Taylor stopped across the river from Matamoros and constructed a star fort, later named Fort Brown. On April 23, Mexican General Mariano Arista sent a thousand troopers across the Rio Grande to cut off Taylor from potential reinforcements. Hearing of the movement, Taylor sent two patrols, one upstream and one down, to locate the Mexican force. Captain Thornton’s patrol ran into an ambush and was wiped out. Eleven American dragoons were killed and forty-six captured.

With the beginning of hostilities, Taylor left Fort Brown garrisoned with 500 or so soldiers (who in a couple days were bombarded by besieging Mexicans) and marched the rest of his men up river to resupply. On his return trip, the American army was cut off from the fort and confronted by Arista’s main force — 3,700 Mexican soldiers and eight cannon against 2,200 American soldiers and ten cannon. The resulting Battle of Palo Alto ended when the Mexicans withdrew having suffered heavier casualties, as the U.S. artillery “tore lanes and vistas” through the infantry lines. Both sides fought well and bravely. 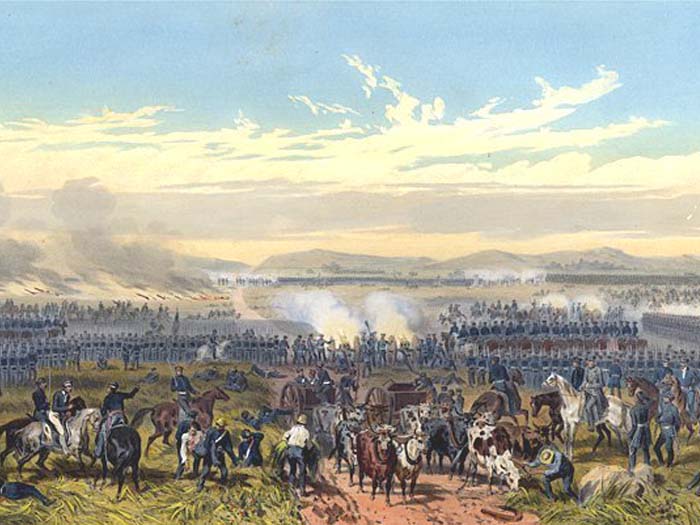 On May 9, the two armies fought the Battle of Resaca de la Palma, resulting in heavier casualties on both sides, but again an American victory. Reinforcements arrived and Arista withdrew across the river and retreated two hundred miles. On May 11, President Polk received word of the ambush of Captain Thornton and asked Congress for a declaration of war. On May 13 he got it. 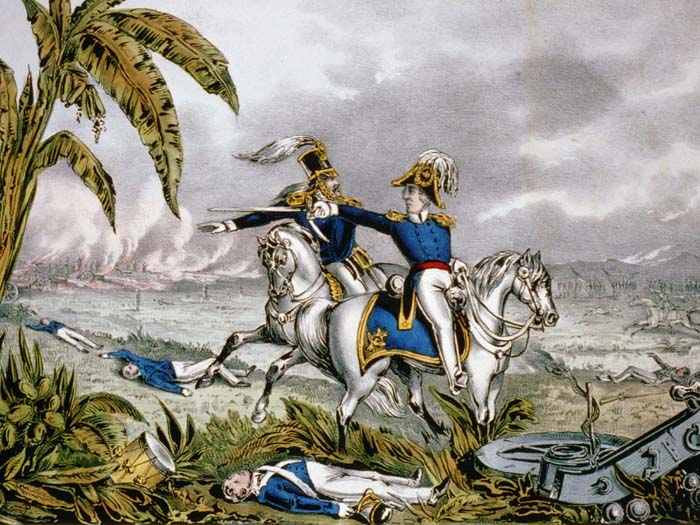 Taylor at the Battle of Resaca de la Palma

The War with Mexico lasted two years and resulted in an overwhelming victory for the United States, including the capture of Mexico City. The Treaty of Guadalupe Hidalgo gave the United States the territory that would become the states of California, New Mexico, Colorado, Arizona, Nevada, Utah, and slivers of Wyoming, Kansas and Oklahoma. The meandering Rio Grande has reclaimed the ambush site where the war began; it is now safely in Mexican hands and Fort Brown is now a golf course. Captain Thornton died before the walls of Mexico City. His second in command, William Hardee, became a Major General of the Confederacy fifteen years later. The conflict was very controversial in the United States, especially in New England. The disagreements in Congress over how to incorporate the new territories into the Union launched the debates that led to the American Civil War. Small incidents of the past sometimes lead, in the providence of God, to history-changing events. 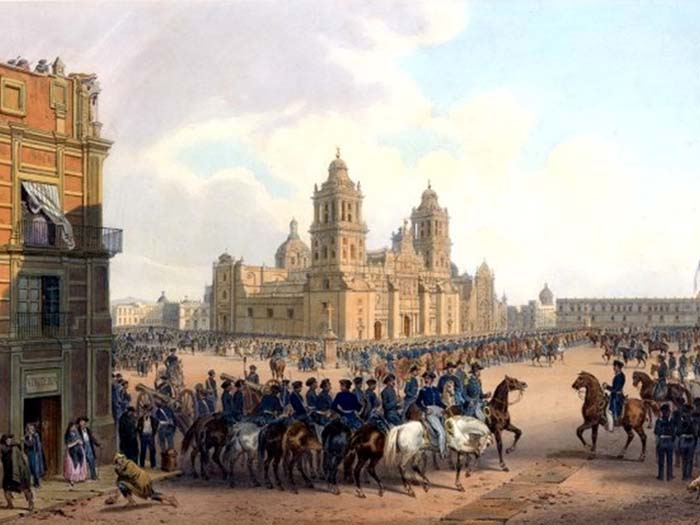