“Whereas ye know not what shall be on the morrow. For what is your life? It is even a vapour, that appeareth for a little time, and then vanisheth away.” —James 4:14

hen the Second World War began, the United States military high command realized that bombing the enemy’s war-production, submarines, and field forces would require new technology, new and more deadly machines, and strategies that would complement or even replace ground forces. The airplanes of the First World War proved inadequate for most tactical missions in the Second. American manufacturers competed to design new fighters and bombers, and then convince the Army to buy their models. Automobile plants were converted to the production of both ground armored vehicles and flying machines. New manufacturing plants sprouted in many cities of the United States. Consolidated Aircraft began building planes in the 1920s. By 1936 they had landed a contract to build the PBY Catalina for the United States Navy, a sea-landing aircraft that they continued to build throughout WWII, used primarily in the Pacific Theatre of Operations. 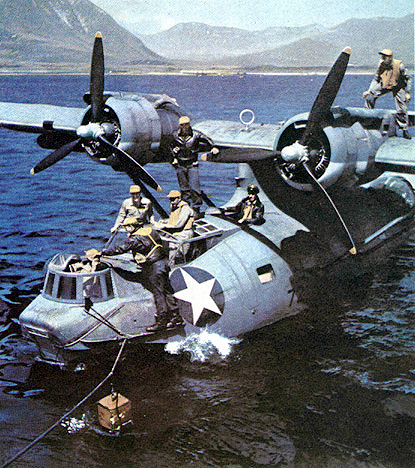 A Consolidated PBY Catalina at sea anchor during WWII

An early model of the Consolidated B-24 plane

In 1938, one year before the start of WWII and three years before the United States joined the Allies against Japan and Germany, Consolidated engineers designed a bomber that met the requirements laid down by the U.S. Army Air Corps (USAAC). The first prototype came off the line at the end of 1939. The first production line B-24 Liberator left the Ypsilanti, Michigan, Ford Plant on November 28, 1942, the first Liberator of the more than 8,685 that would take to the air from the Michigan plant. More than 18,500 were built in the war, many produced at Consolidated’s main facility in San Diego, which employed 41,000 people by 1941. At the height of production one B-24 was completed every 59 minutes. They carried ten .50 caliber Browning machine guns for self-defense from four turrets and two waist positions, and 8,000 pounds of bombs for short range and 5,000 for long range bombing sorties. 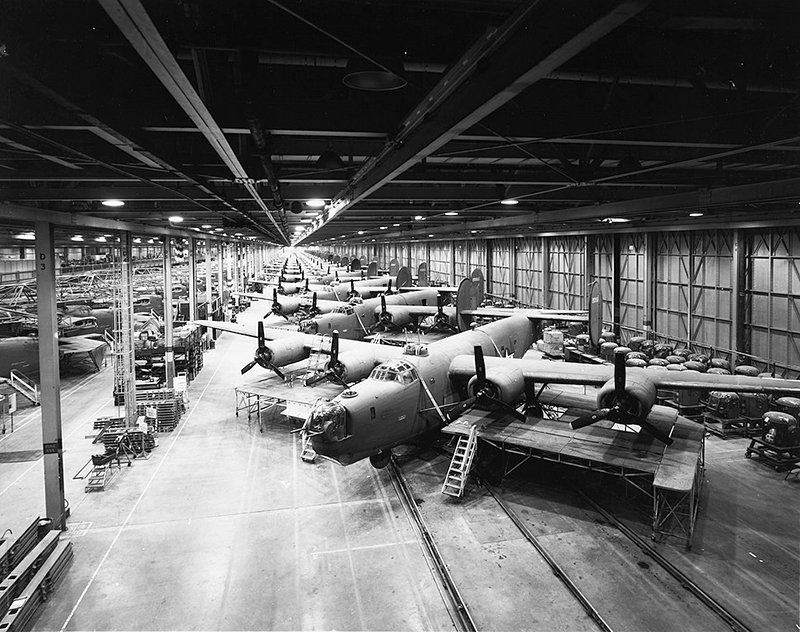 Consolidated B-24J Liberators under construction at the Consolidated-Vultee plant in San Diego, California, during the summer of 1944

More than 100,000 American airmen were killed in WWII, about one-quarter of the nation’s total losses. Almost 7,000 of those deaths were due to accidents, many in the United States. Designing planes and flying the early models, especially, proved hazardous, and the B-24, with a crew capacity of ten men contributed its share of accidental fatalities. In the European theatre (ETO) of operations, the B-24 became known as “the flying coffin,” “the boxcar with wings” and the “widow-maker.” The Liberator was difficult to fly and had a poor low-speed performance compared to its sister B-17. Nonetheless, the B-24 was the most-produced bomber and multi-engine aircraft in history, and fought in every theatre of the Second World War. The pilots liked the roomier cockpit than in the B-17 construction, its larger payload, its ability to take a beating from anti-aircraft fire and fighter planes, and faster speed in the air. 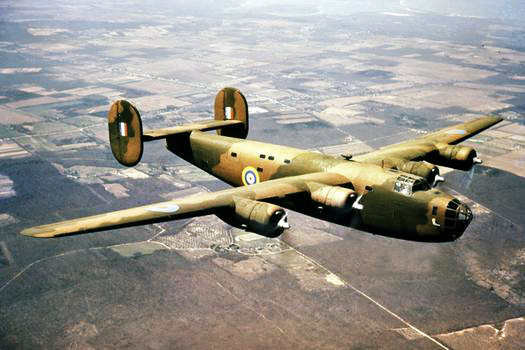 A rare color photograph of a B-24 in RAF service

The typical crew included four officers—Pilot, Co-Pilot, Navigator and Bombardier. The other six men were enlisted, usually sporting three stripes—flight engineer, tail gunner, ball turret gunner, radio operator, and two waist gunners. They flew in a system of four planes in a box pattern, almost wing-tip to wing-tip with “stacks” of the other identical formations not far in a formidable armada of roaring bombers. Every plane had an artistic image and name painted near the nose. 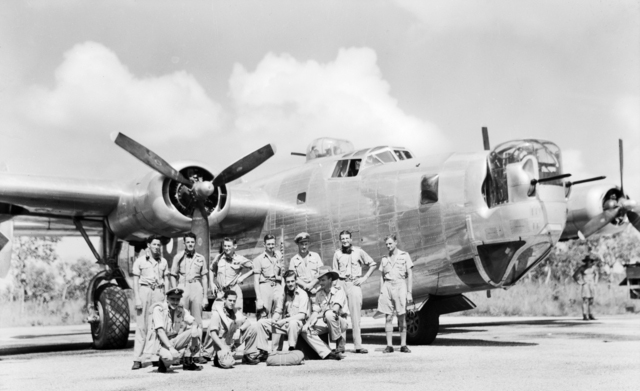 An informal group portrait of a crew of a Consolidated B-24 Liberator bomber aircraft of the RAAF, standing beside their aircraft

The United States Air Corps began strategic bombing in the fall of 1942 and did not let up until the war in Germany ended. The Eighth Air Force flying out of English airfields flew B-24s and B-17s, totaling 1,440,000 sorties and dropped 2.7 million tons of bombs on France and Germany, killing hundreds of thousands of civilians and military personnel across Europe. The famous Hollywood actor Jimmy Stewart commanded the 703rd Squadron of the 445th Bomber Group, and became one of the most competent, distinguished, and decorated Squadron Commanders of the war. Leading his bomber group as the pilot of a B-24, he rose to the rank of Brigadier General and remained in the Reserves after the war, for the rest of his life. His heroic career in the Eighth Air Force has been recounted in several excellent biographies. 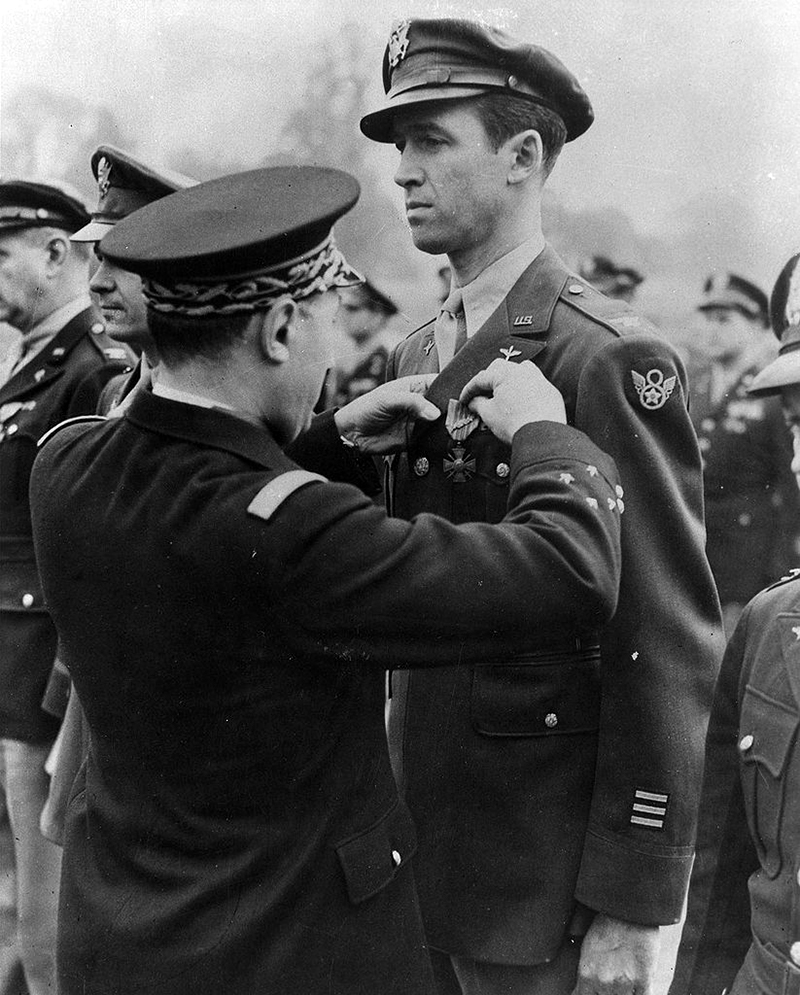 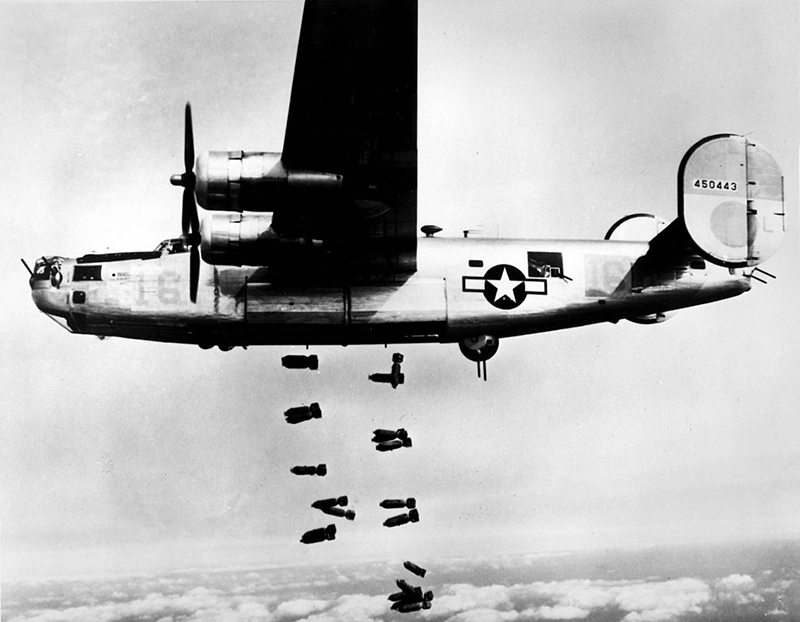 A consolidated B-24 Liberator of the 15th A.F. releases its bombs on the railyards at Muhldorf, Germany, on March 19, 1945

Strategic bombing became one of the most controversial military actions of the war. Many people, including military policy-makers, understood that Scripture forbade making war against civilian populations and food production. The Joint Chiefs justified raining death and destruction on manufacturing or transportation centers, often located in heavily populated areas, by arguing that such firepower would cripple the enemy’s capacity to continue the fight and thus shorten the war, saving lives in the long run. Pragmatic decisions and revenge usually trumped moral compunction when it came to bombing the cities of Germany and Japan. Ironically perhaps, the German ability to repair damage and rebuild factories, as well as going underground with production, barely stalled until the war ended with Hitler’s suicide and the subsequent surrender of armies. More than 1,200 B-24 crew members were shot out of the sky, and more than 850 of them died. 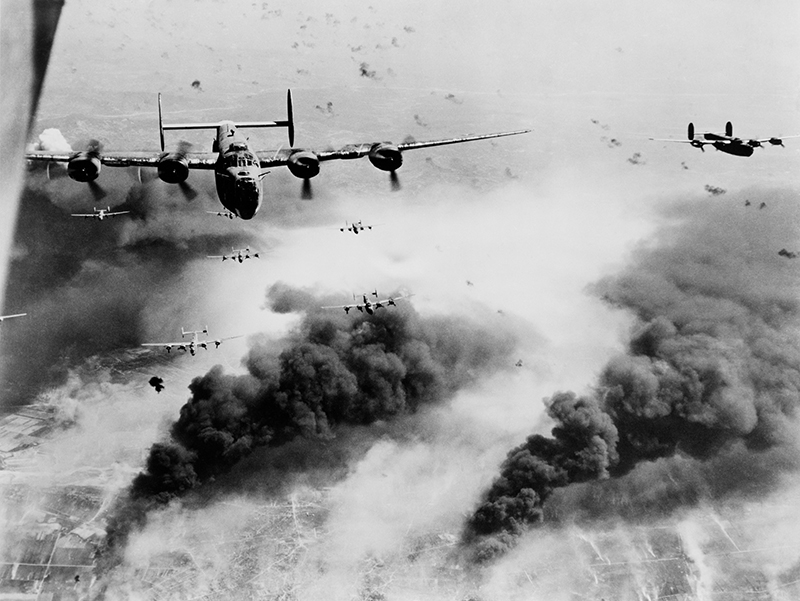 15th Air Force B-24s fly through flak and over the destruction created by preceding waves of bombers, 1944