“I will stir up Egyptian against Egyptian—brother will fight against brother, neighbor against neighbor, city against city, kingdom against kingdom.” —Isaiah 19:2

lysses S. Grant and William Tecumseh Sherman fought side by side for two years—Shiloh, The Vicksburg Campaign and Chattanooga. President Lincoln decided to turn command of running the war over to Grant because of his great success in the western theatre of the Civil War, and because the general understood the strategies that Lincoln desired—wholesale destruction of the armies of the Confederacy and its “infrastructure”, such as industry, food, and civilian morale. The price would likely be high—especially for the enemy, especially for the non-combatants upon whom Southern independence depended as much as did the “rebel” armies. Napoleon had introduced total war in the early century against the enemies of France; Grant and Sherman would show the world how well it worked in the American context. 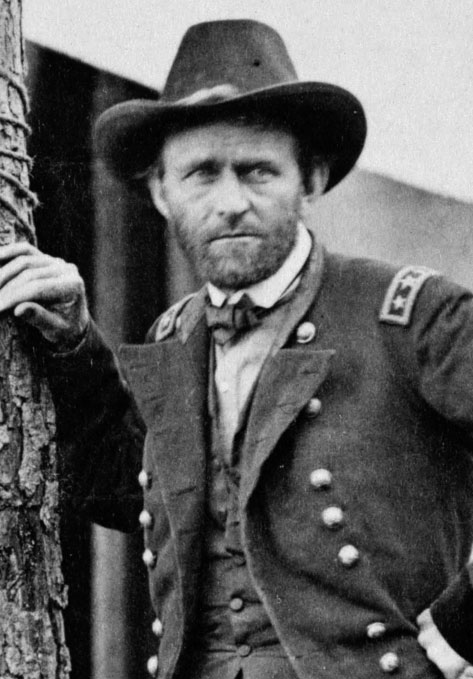 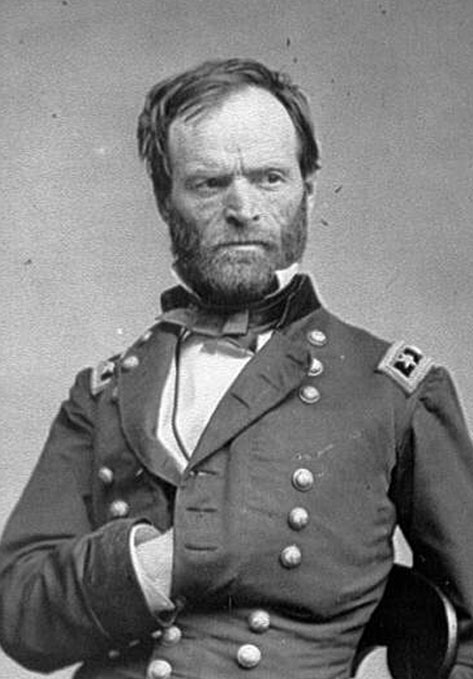 Grant ordered Sherman to take charge of the armies in the west and capture the vital manufacturing city of Atlanta. The Atlanta arsenal employed 5,500 men and women producing percussion caps, gun carriages and all sorts of ammunition. The Confederate Quartermaster Department employed 3,000 seamstresses who produced in a three-month period 37,000 wool jackets, 13,400 pairs of pants, 10,000 cotton shirts, 13,700 sets of drawers, and 1,500 flannel shirts. One steam tannery produced 3,500 pairs of shoes in its first month. Eighteen warehouses were packed with 45,000 pounds of dried beef, 4.75 million pounds of bacon, 1,700 barrels of flour and much more. The Chattahoochee River provided power for the cotton mills in Atlanta and across the river in Roswell, where blankets, flags, and other clothing were manufactured. Four key railroad lines converged in Atlanta to transport both civilians and military forces—soldiers, casualties, prisoners and supplies to all parts of the Confederacy east of the Mississippi. Atlanta was also home to military hospitals, large and small. The city was the most highly entrenched and defended place in North America, except for the enemy capitols. 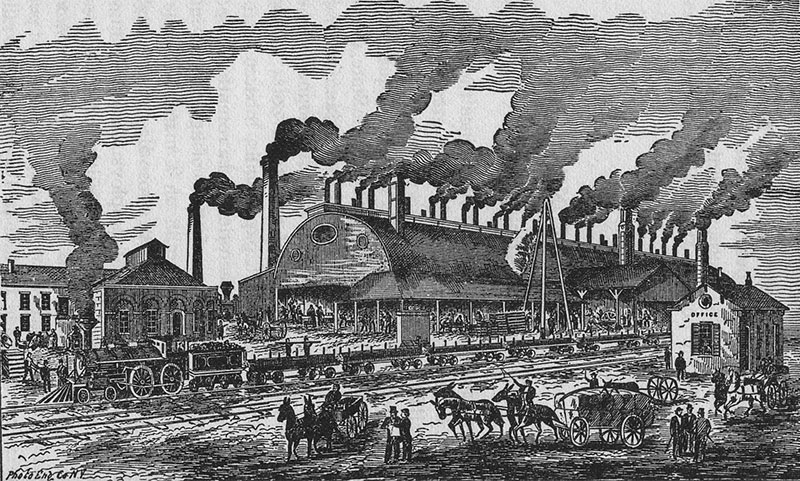 The Atlanta rolling mill, before the seige of Atlanta 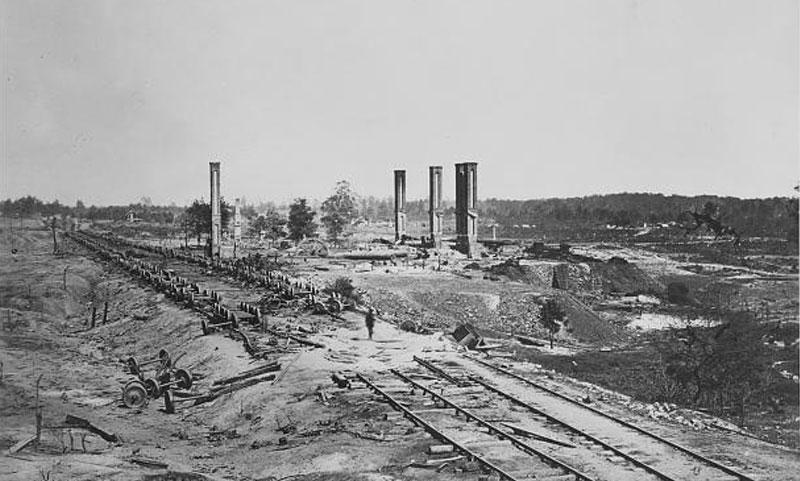 The Atlanta rolling mill, after the seige of Atlanta

Sherman joined three armies to accomplish his mission—The Army of the Ohio, The Army of the Tennessee, and the Army of the Cumberland—more than 110,000 men against General Joseph Johnston’s estimated 70,000 Confederates. The campaign roughly followed the rail line from Chattanooga to Atlanta. The armies fought a series of mostly small battles in May through September, 1864, beginning at Resaca and ending after Kennesaw Mountain, just outside Atlanta. The Union forces moved relentlessly southward as Johnston avoided being brought to decisive battle through strategic retreats, until he crossed the Chattahoochee and entered the forts and entrenchments defending the city itself. Political pressure and personal animus brought the replacement of Johnston with a younger and more aggressive commander, John Bell Hood, who was not fully recovered from the loss of an arm and a leg in previous battles. 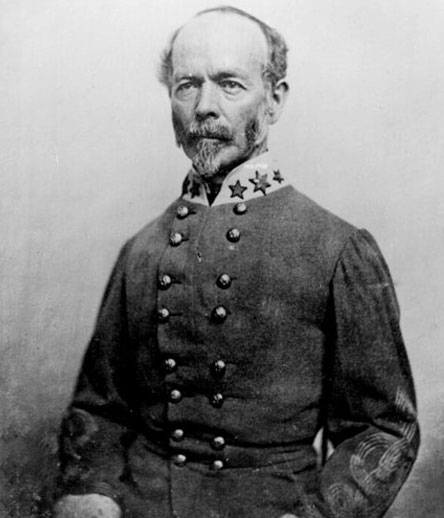 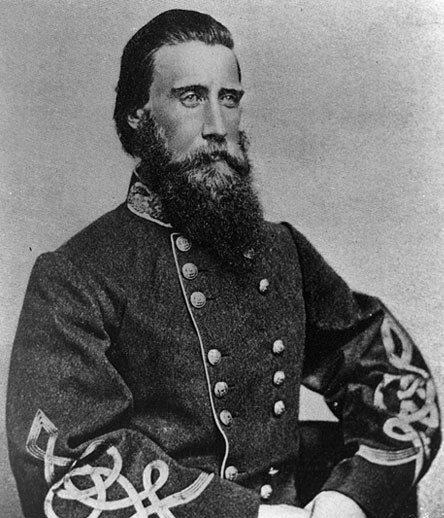 Sherman relished the Confederate change in command, knowing that Hood would never settle for defending the city without attacking out of his protected forts to drive away the invaders. The Battles of Peachtree Creek and the Battle of Atlanta proved his surmise, and Hood lost thousands of irreplaceable men in futile offensives. Sherman shelled the city relentlessly for over a month, killing civilians and destroying homes using “hot shot”: incendiary shells that started fires when they struck. He sent cavalry expeditions and infantry columns into the countryside to cut the railroads and draw Hood from the city. His tactics worked and on September 1, Hood, with his supply lines cut off, marched his surviving 30,000 troops out of the city, delivering it to the 81,000 men that Sherman still commanded. 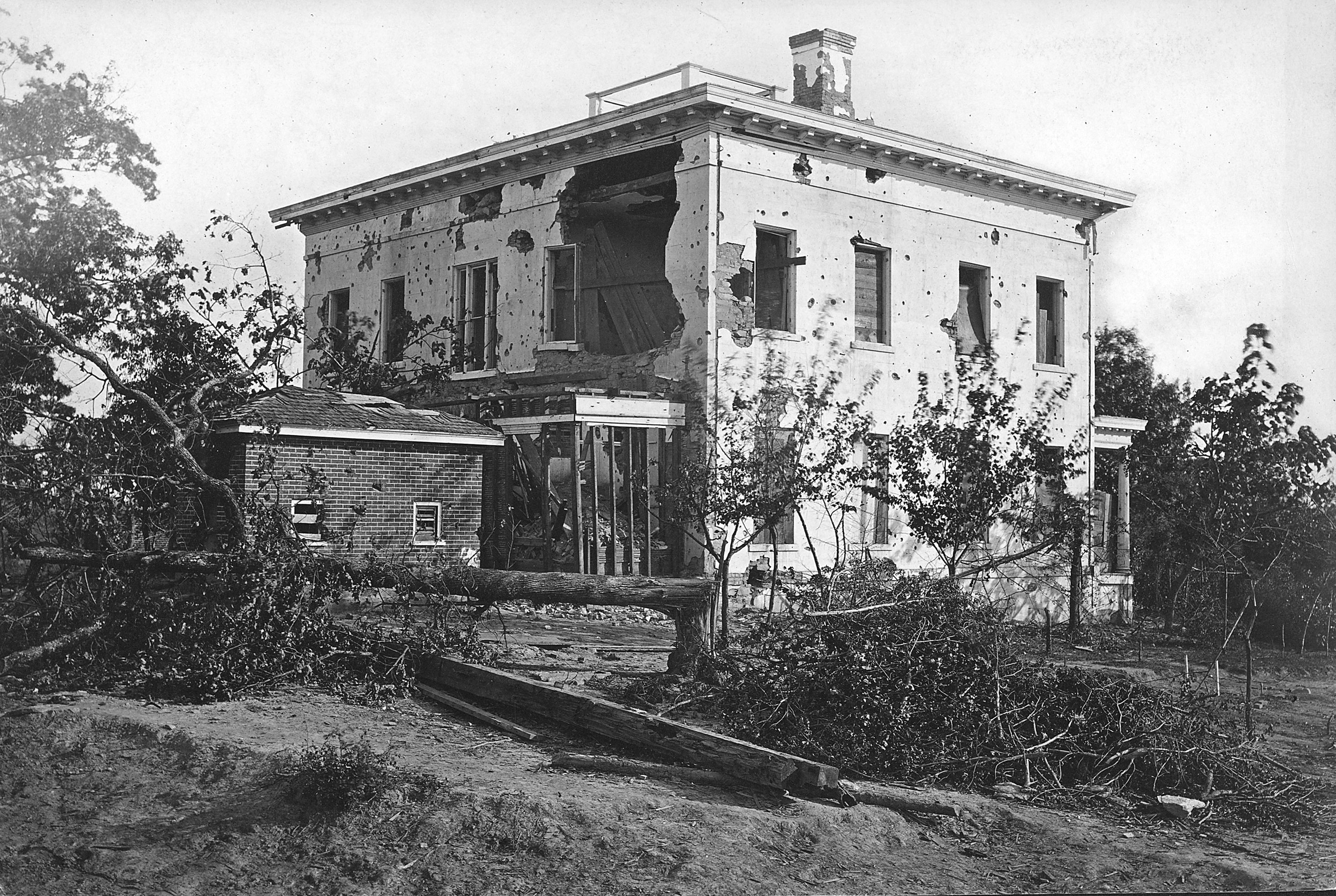 The Potter (or Ponder) home served as a Confederate sharpshooter post, until targeted for destruction by Union artillery 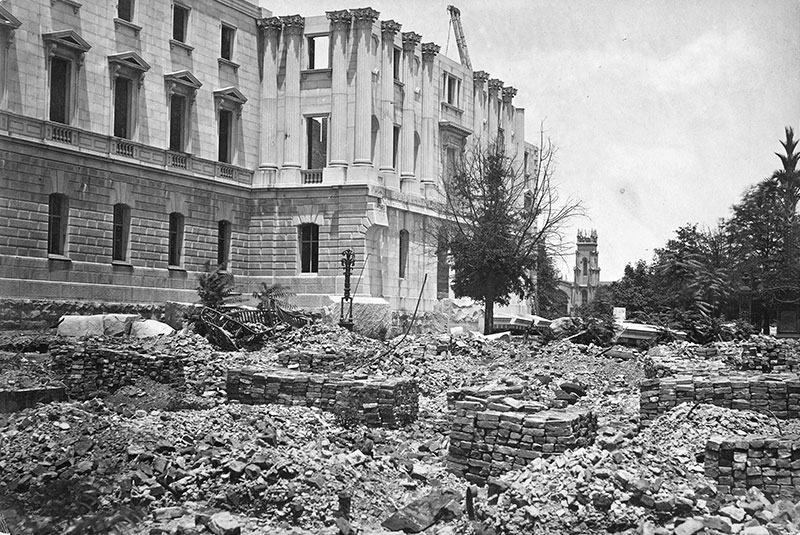 A building in Atlanta, showing the devastating destructiveness of Sherman’s methods

On September 4, Sherman issued orders for the many Unionist citizens of the city to abandon their homes and move to the North and all others to the South—an attempt to totally depopulate the city. Over the next two months, the Union army settled into Atlanta sleeping in the beds of the evicted tenants and property owners. The fall of the city improved Abraham Lincoln’s chances of reelection in November and fulfilled the first step in Grant’s grand scheme to carve up the Confederacy and destroy its armies and morale. 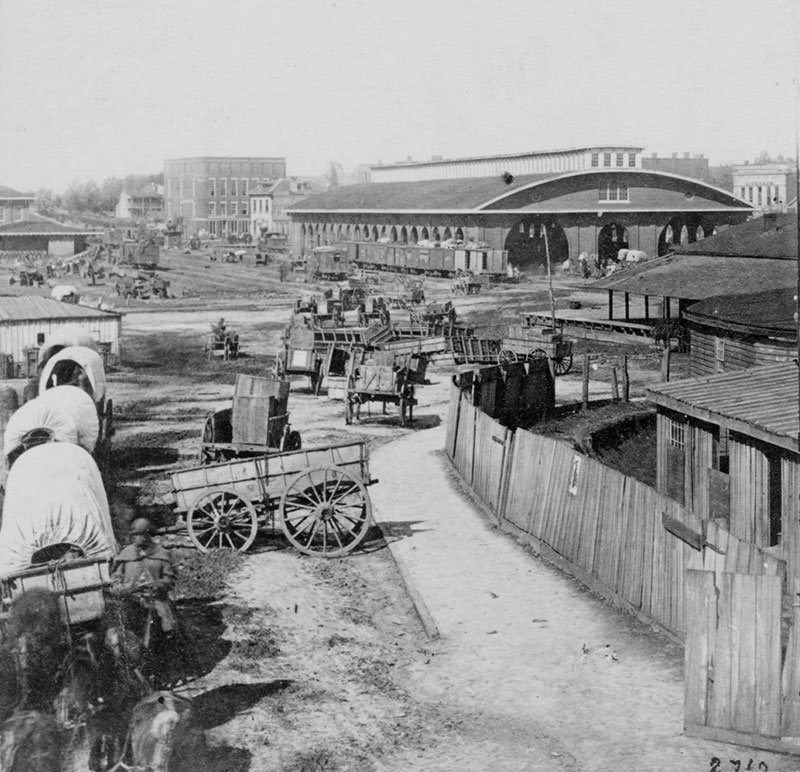 The Atlanta train depot, showing evacuees trying to leave town before the seige, and having to abandon wagonloads of belongings 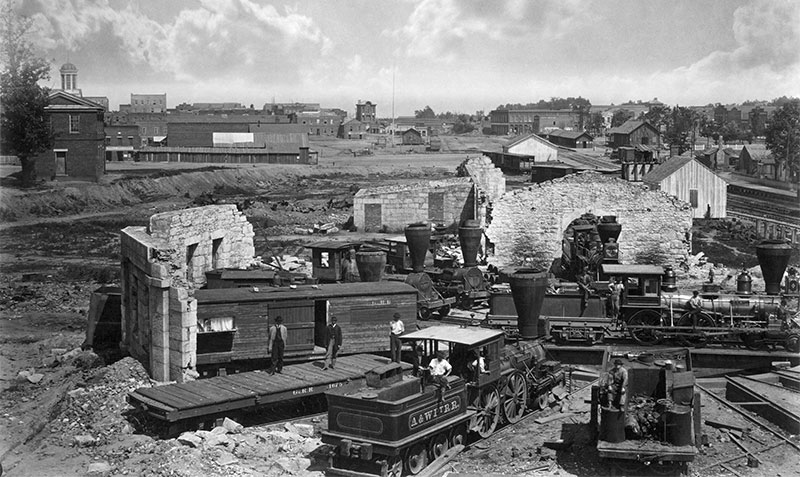 The Atlanta train depot roundhouse, after the seige 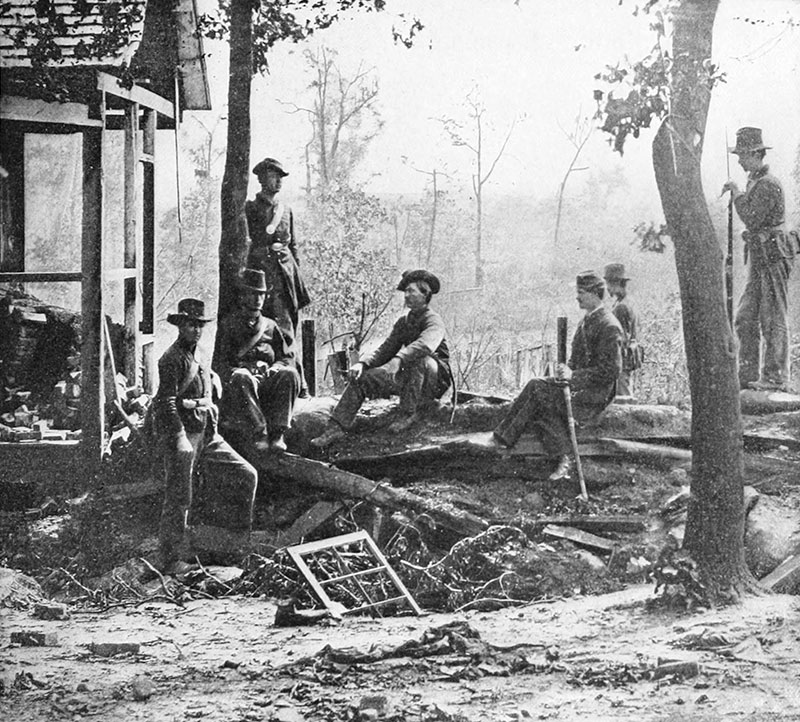 Union troops relax around a destroyed home in the Atlanta area

The meticulously planned utter destruction of Atlanta—gladly approved by Grant himself and a reflection of the administration’s policy according to the President—continued for three days, the last Union troops lighting the final fires on November 15, and marching away as Atlanta burned. Some of the surrounding towns were put to the torch as well, especially Marietta. It would prove a nice tune-up for a sixty-mile-wide swath of blackened landscape and former homes, from Atlanta to the sea, celebrated in a popular marching tune sung by Sherman’s army in the victory parade in Washington after the war ended. When General Sherman said “war is hell,” he meant it! 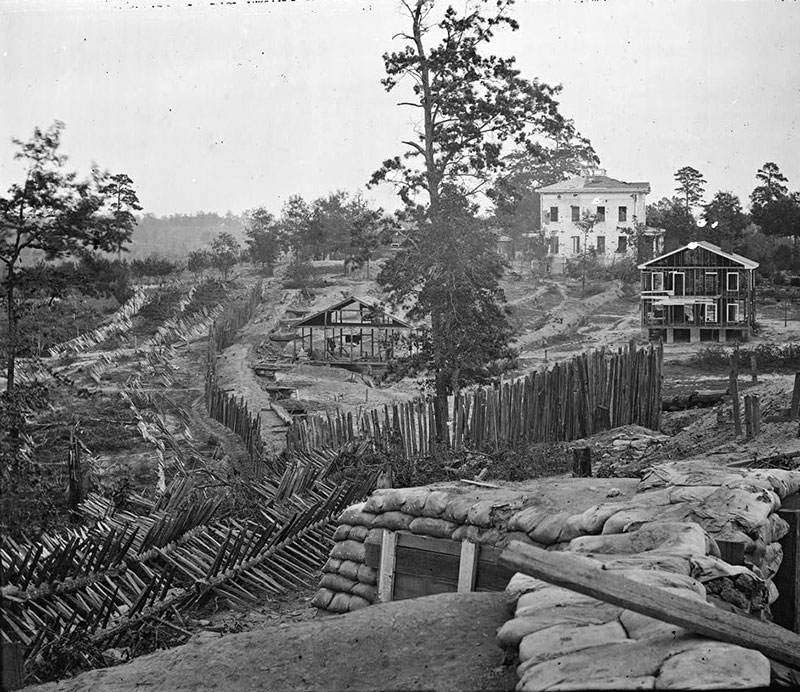 The Potter (or Ponder) home (white house in the background) and surrounding countryside showing the utter destruction of war, including buildings stripped down to their frames so that the siding might be repurposed