The Battle of Tippecanoe, 1811

“And hath made of one blood all nations of men for to dwell on all the face of the earth, and hath determined the times before appointed, and the bounds of their habitation.” —Acts 17:26

ut of 45 United States Presidents, 29 experienced military service, 17 saw combat, several of them in more than one war. Twelve American Presidents served as generals. Although he fought in several military engagements, General William Henry Harrison (1773-1841) is remembered primarily for one great military engagement—and one which eventually led to his presidency—fought near the confluence of the Wabash and Tippecanoe Rivers in Indiana on November 7, 1811. 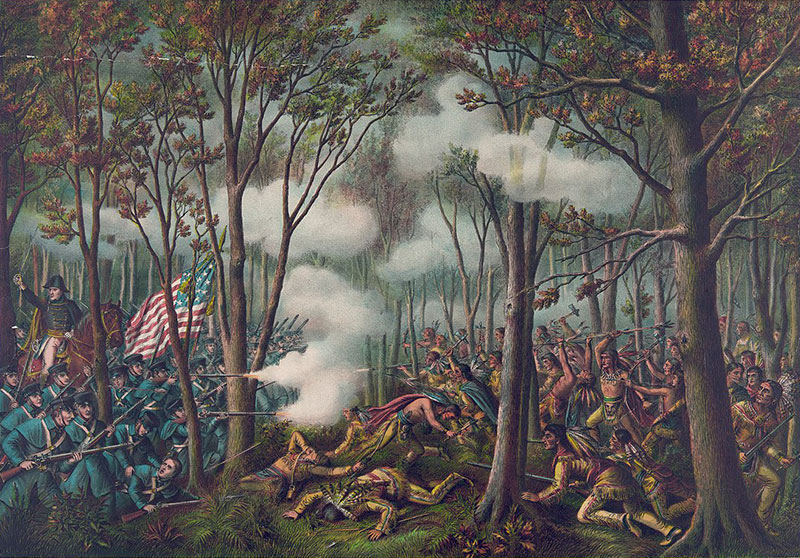 Battle of Tippecanoe: American troops under the leadership of General William Henry Harrison are shown fighting the Indian forces of The Prophet, Tenskwatawa (the brother of Tecumseh)

William Henry Harrison, the last president born under British rule, saw his first light of day in Charles City County, Virginia, a couple of miles from the birthplace of one of his successors in the presidency, John Tyler. His father, Benjamin Harrison V, signed the Declaration of Independence and his grandson Benjamin became the 23rd President of the United States. The seventh and youngest son of Benjamin V, Harrison grew up at Berkley Plantation on the James River in the highest antebellum class of society. He was homeschooled by tutors until the age of fourteen, and then attended the foremost Presbyterian college in the South, Hamden-Sydney. His father pulled him out, perhaps lest he abandon their aristocratic Episcopal heritage. He studied medicine at U. Penn under Benjamin Rush (difficult to avoid Presbyterians in those days) but entered military service under the advice of Virginia Governor “Light Horse Harry” Henry Lee, the father of Robert E. Lee. 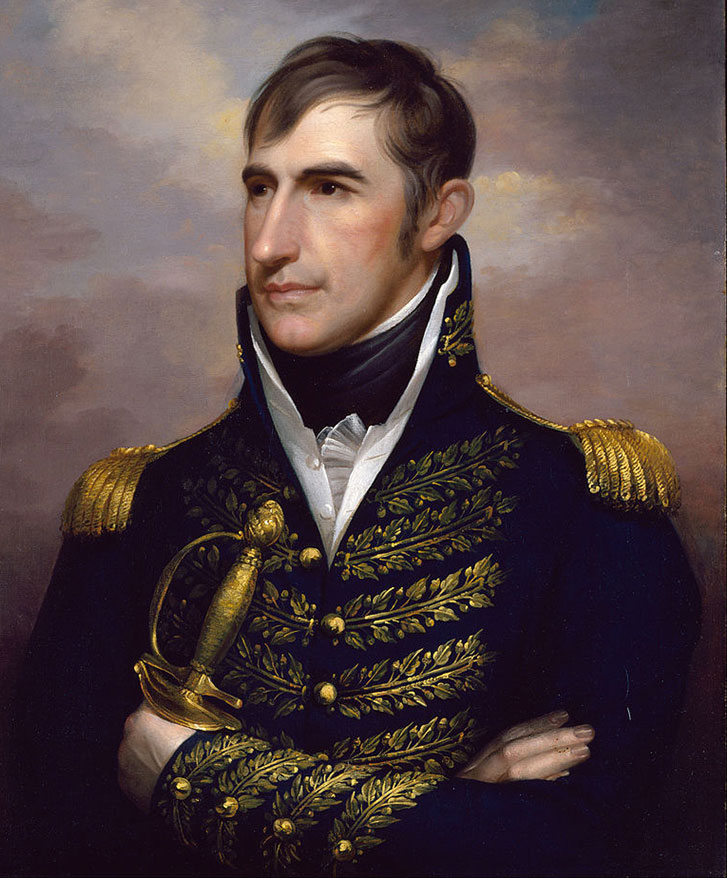 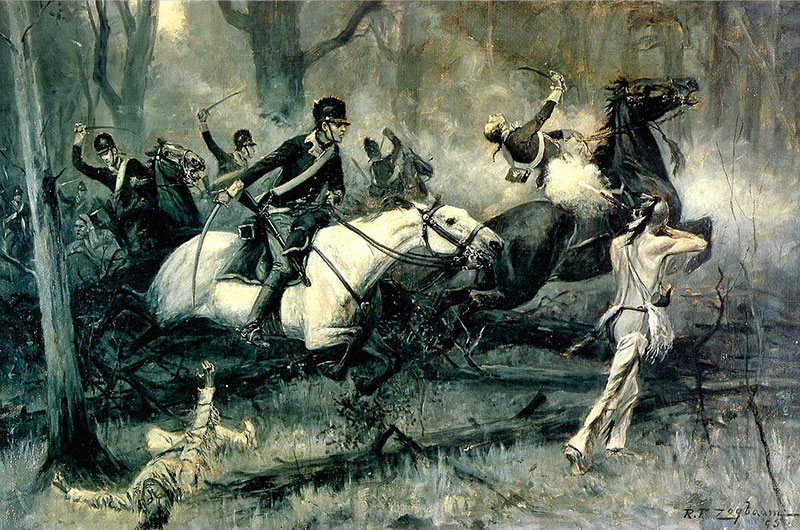 Battle of Fallen Timbers, in which Harrison fought

He served as a junior officer under General “Mad” Anthony Wayne, fought at the Battle of Fallen Timbers in 1792 in the Northwest Indian War, and was a signatory of the Treaty of Greenville which ceded most of Ohio to the United States. He eloped and married the daughter of a former colonel in the Revolutionary War, who forbade the match; Anna Symmes bore him ten children and the old colonel eventually reconciled with Harrison. He rose steadily through the ranks until resigning from military service in 1798 to enter politics. He remained in the Northwest Territories and eventually served in the U.S. Congress for a term and was appointed Governor of the Indiana Territory. 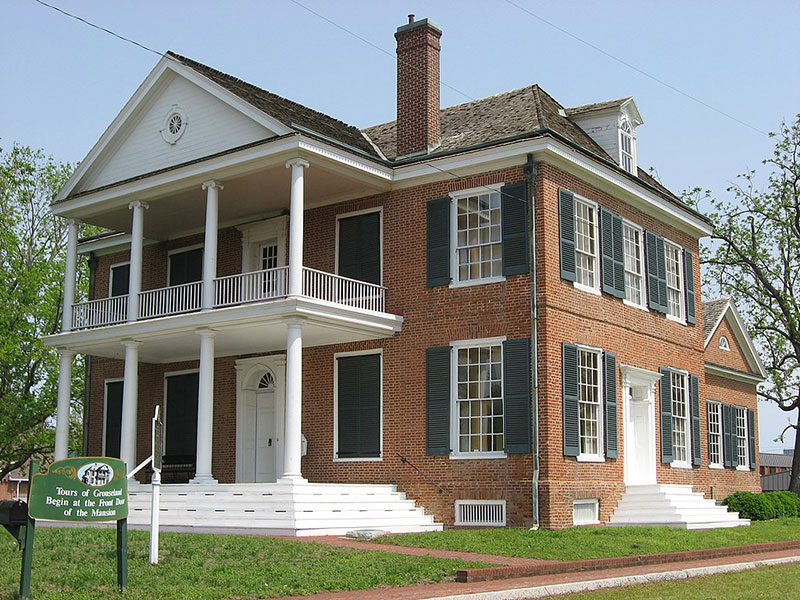 Grouseland, the home of Harrison during his time as Governor of Indiana, and where he met with Tecumseh but failed to make peace, this failure leading eventually to the Battle of Tippecanoe

The land over which he claimed jurisdiction and governance proved a turbulent territory. Although he was able to negotiate land cessions from three other tribes, the Shawnee—large and well-led by Tecumseh and his brother Tenskwatawa (known as “The Prophet”)—contended with the American settlers and military forces in the region. Tecumseh met with Governor Harrison at his home and demanded the treaties be abrogated and the Indian land returned. When Harrison denied any concessions, Tecumseh became an ambassador to other tribal groups as far South as Tennessee and Alabama, seeking to persuade a pan-Indian alliance to drive the white men out of the Ohio Valley and Northwest territories back across the Appalachians. 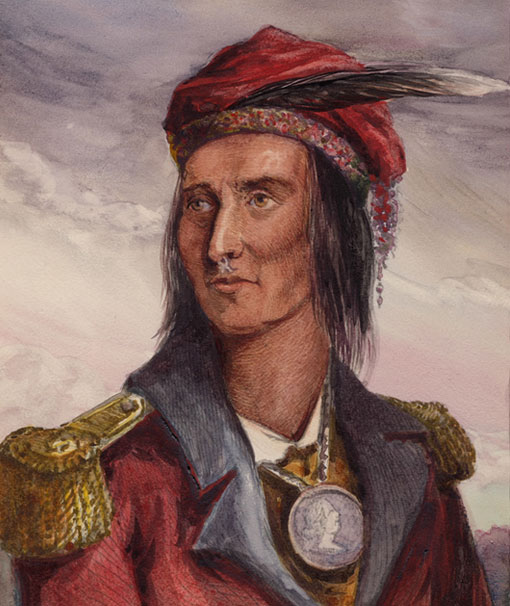 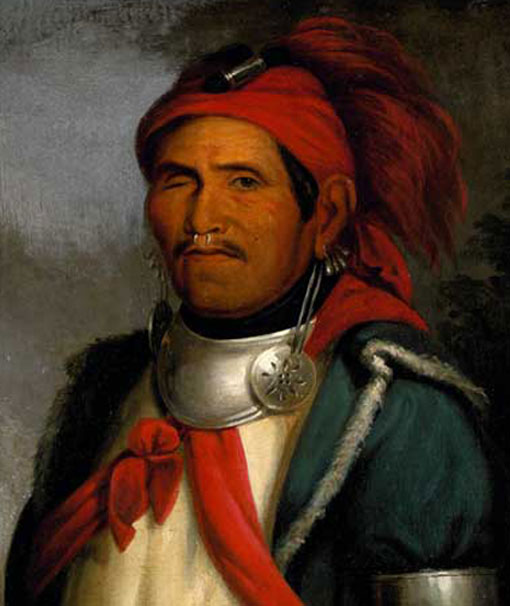 Tecumseh’s brother Tenskwatawa—more of a religious mystic than a warrior—convinced the warriors to attack Governor Harrison and his troops, having had a dream that the white men’s bullets would not hurt them, though he knew that his brother would likely consider such an attack premature and ill-advised without allies. The Secretary of War gave Harrison orders to settle the contentious matters, by military force if necessary. Harrison marched a thousand men, both regulars and militia, to meet with the Shawnee leaders at Prophetstown. Witnesses and historians disagree over who fired the first shots, which led the two armies into a ferocious battle. The soldiers had slept with their rifles loaded but the camp was not fortified. The firing erupted at about 4:00am November 7, 1811, but the natives attacked piecemeal on different segments of the line. The U.S. regulars rushed in squads to militia lines that needed quick reinforcement, as the Indian commanders White Loon and Stone Eater urged their warriors into the militia whose small-bore rifles had little effect on them. 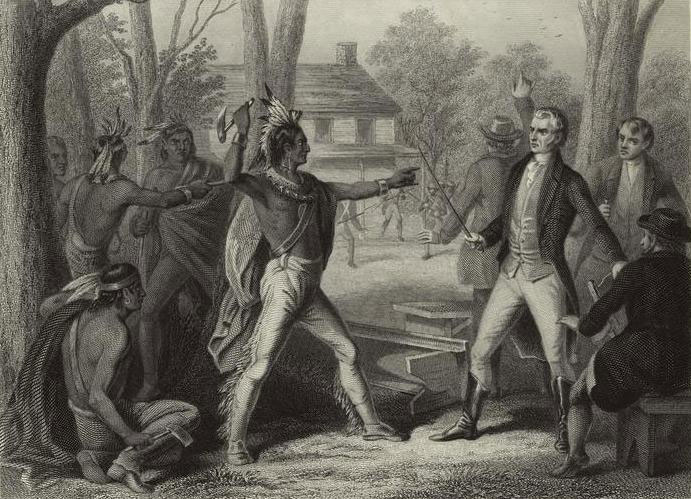 The battle lasted more than two hours and Harrison lost about sixty killed including many officers, and one hundred twenty-six wounded; Indian losses were estimated to be about fifty killed and eighty wounded. The last assaults were finally beaten off and the Indians retreated to Prophetstown. After taking the town, now inhabited only by older women, the soldiers burned it down with all the stored provisions of the Shawnee. They also dug up the cemetery and scattered the remains, which was reciprocated by the tribesmen after the soldiers left the area. The engagement captured the imagination of the country as the Battle of Tippecanoe, but the Shawnee increased their depredations, killing many civilians in isolated settlements and cabins. The following year, Tecumseh joined the British in driving the Americans out of the Northwest in the War of 1812. The Tippecanoe battle participants were given thanks by Congress, but Governor Harrison’s name was removed from the original bill. He resigned his governorship and returned to the army as a general, leading his troops to triumph in Canada in the defeat of the British in the Battle of the Thames, where Tecumseh was killed. 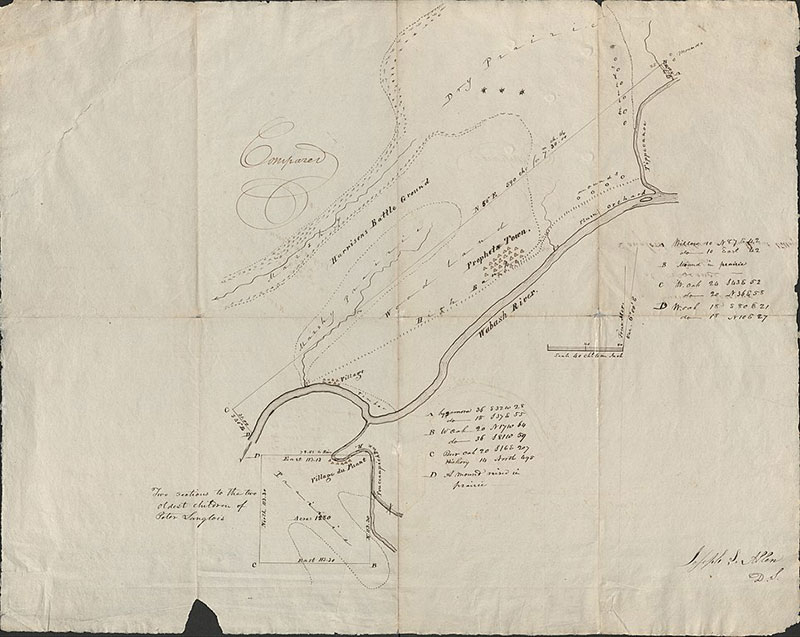 Treaty map of Prophetstown and site of Battle of Tippecanoe, 1819

In 1840 William Henry Harrison ran for President with John Tyler as Vice President—two men from the same county in Virginia! Their campaign slogan was “Tippecanoe and Tyler too.” Shortly after his inauguration, however, Old Tippecanoe contracted pneumonia and was treated with blood-letting, ipecac, castor oil, calomel, mustard plasters, boiling petroleum, and Virginia snakeroot. He died one month into his presidency. 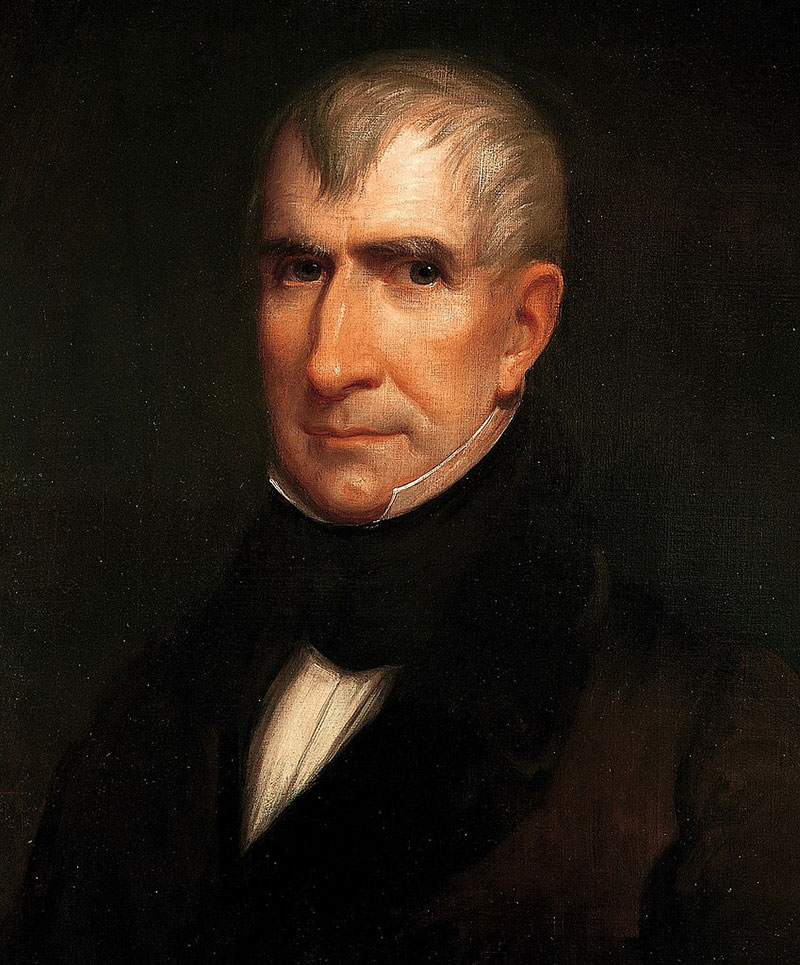