“God blessed them; and God said to them, ‘Be fruitful and multiply, and fill the earth, and subdue it; and rule over the fish of the sea and over the birds of the sky and over every living thing that moves on the earth.’”
—Genesis 1:28

ne of the most massive engineering projects in history took place from its formal and legal authorization on December 21, 1928 to its grand opening in 1936. Originally called the Boulder Canyon Project, it officially became known as the Hoover Dam, after President Herbert Hoover, a great mining engineer himself, who had begun the talks about such a project when he was Secretary of Commerce in 1922, and stewarded much of the work during his years as President of the United States, 1929-1933. President Franklin Roosevelt changed the name to the Boulder Dam out of hatred of Herbert Hoover and a desire to receive the credit himself. Congress restored Hoover’s name to the Dam in 1947 after Roosevelt’s death. 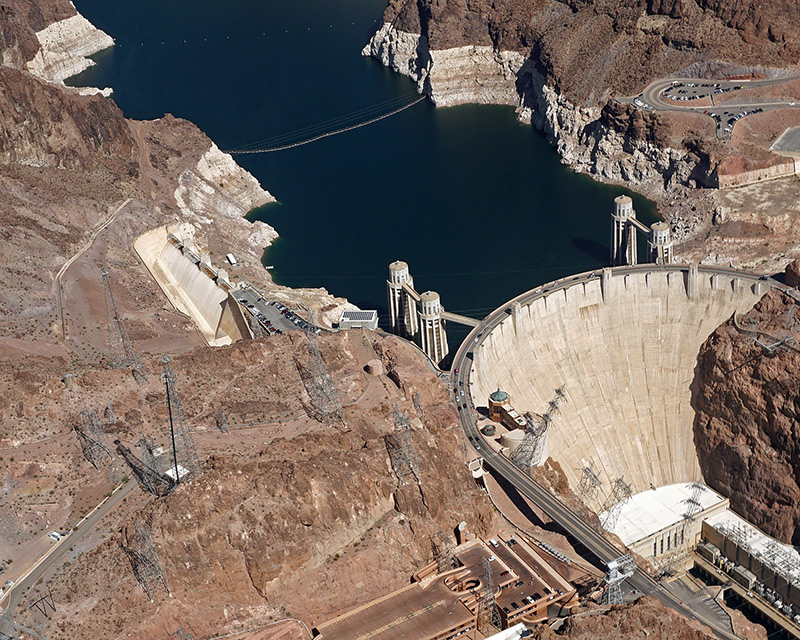 An aerial view of the Hoover Dam

In the early 20th Century, the “Reclamation Service” began looking at ways to generate hydro-electric power for Los Angeles and other sites as well as build for flood control. They considered the Colorado River a potential dam area, but the technology to transport electricity for more than eighty miles would have to wait a few years for development. Various schemes were proposed, but not until the middle of the 1920s could engineers seriously explore the river region for possible dam sites. A region known as Black Canyon met all the requirements for harnessing the Colorado, and enough of the states through which the river flowed approved the construction of what would become the most massive concrete “arch-gravity” dam in the world. 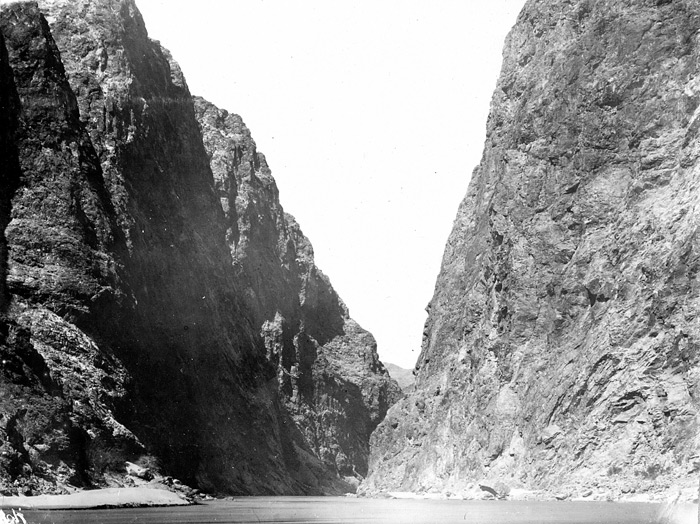 A 1904 picture of the future site of the Hoover Dam

As designed, the Hoover Dam would be more than 650 feet thick at the bottom and 55 feet at the top. The federal government agreed to provide all the materials, and began to consider bids for the construction. The specs were one hundred pages long, with seventy-six drawings. A consortium of six companies won the bid, agreeing to complete the dam within seven years. A new town was built to house the workers, Boulder City, and a railroad built connecting the job site with Las Vegas, Nevada. A highway connecting Nevada and Arizona was to be built along the top of the dam. 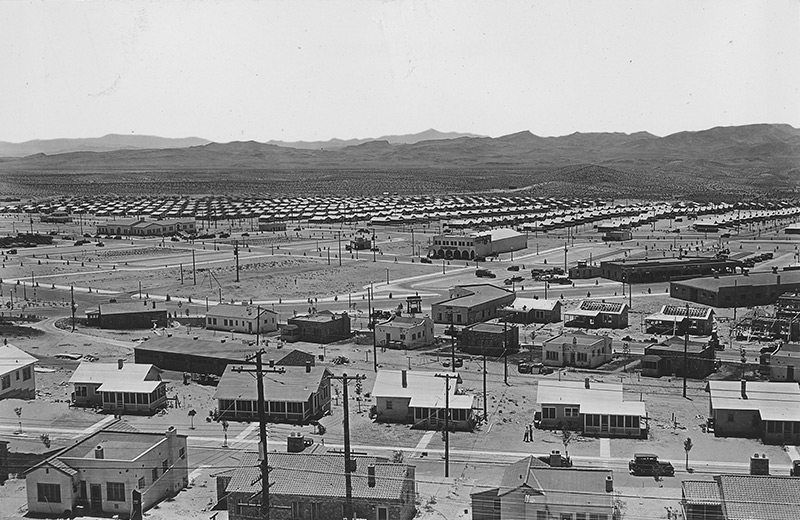 Because the Great Depression hit just about the time the construction began, thousands of potential workers descended on the job site. Three separate camp sites accommodated the unemployed hordes that came for work. Some of them lived in bunk houses clinging to the side of the canyon walls. The project used between 3,000 and 5,000 laborers in the course of construction. Before actual work could begin on the dam itself, four diversion tunnels were dug through the canyon walls so the Colorado River avoided the work-site. Cofferdams were constructed also, to protect the thousands of men digging below the water-line. 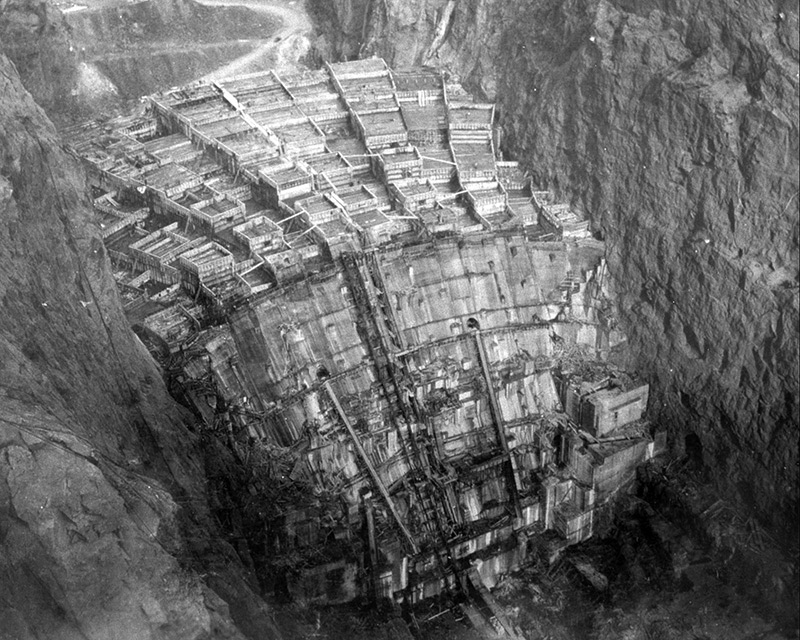 The first concrete was poured June 6, 1933. Before it was all done, 3,250,000 cubic yards of concrete was poured, “enough concrete to build a two-lane highway from San Francisco to New York.” They embedded more than 582 miles of cooling pipes within the concrete. The work was dangerous and drew tourists to the site to watch the men swinging across the canyon, the so-called “high-scalers.” In the course of construction, 112 men were killed in various aspects of the construction, from being crushed by falling rock to drowning in the river. 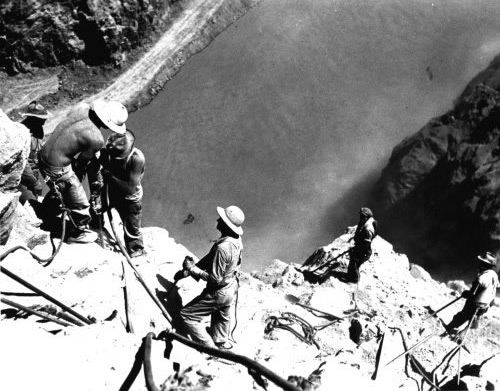 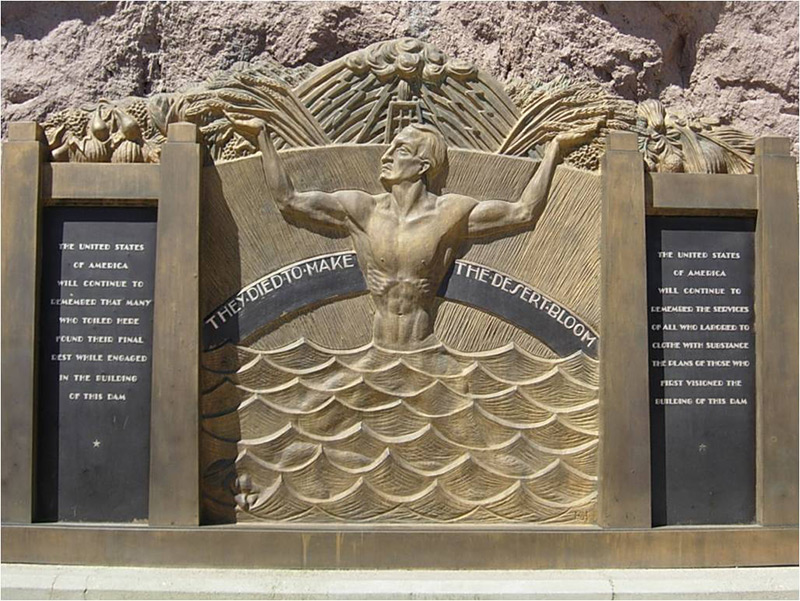 Memorial to the 112+ workers who died in the process of building the Hoover Dam, which reads in part “They died to make the desert bloom”

The dam created Lake Mead, the largest man-made lake in the world, and the turbine-generators provide electricity to people in three states. The interior of the dam contains museums and guided operational tours, and attracts more than one million visitors per year.

Secretary of the Interior Harold Ickes spear-headed the change of name that Congress had authorized in honor of President Hoover, to the “Boulder Dam” at its dedication in 1936. The new name never really stuck, and many people continued to call it the Hoover Dam, officially affirmed by Congress again in 1947, over Ickes’s protestations. The Dam is a National Historic Landmark and remains one of the most remarkable engineering feats in history. Landmark Events tours this amazing monument to American engineering prowess during our Grand Canyon Adventure. 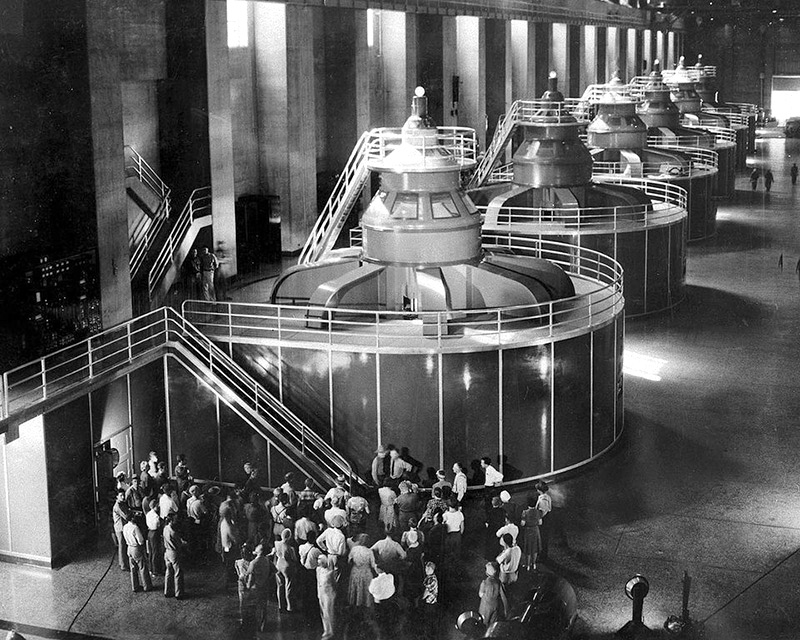 Tourists gather around one of the generators in the Nevada wing of the powerhouse to hear its operation explained, September 1940 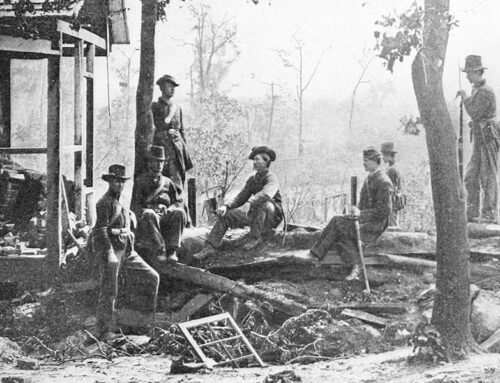