reland’s struggle for sovereignty from her English conquerers endured for over 700 years. Those centuries contain some of the most inspiring, heartbreaking and pertinent stories I’ve ever read—they are the stories of ordinary men and women who were resilient in spite of their losses and who were raised to fight and triumph gloriously. 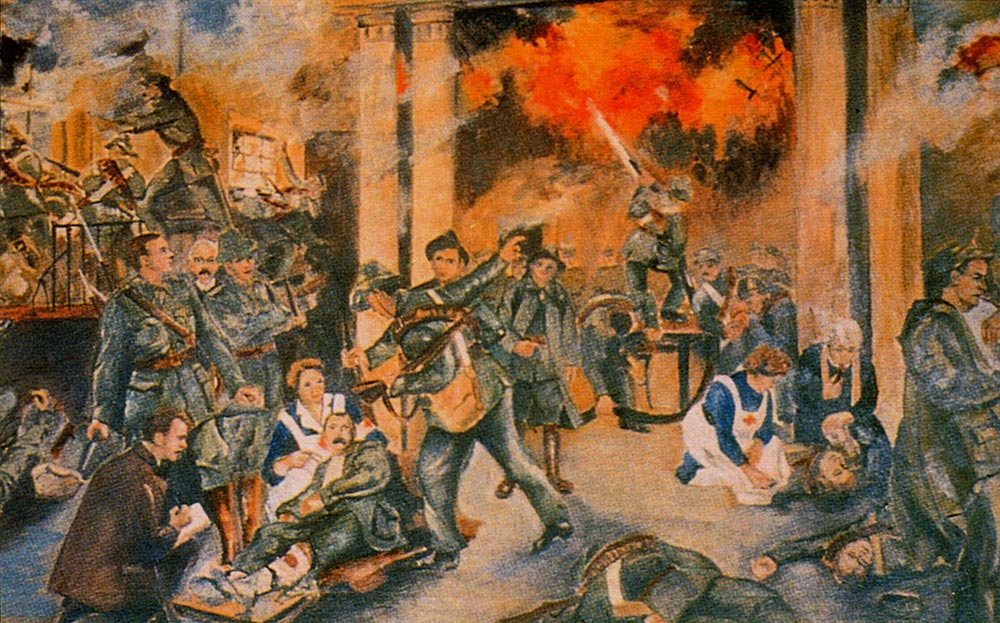 Growing up in my parents’ home, my favorite coffee table book was a hefty thing, vividly capturing Ireland’s War for Independence from 1916 to 1921, their final struggle to achieve this long hoped for dream. I found the human elements of this war to leap off the page and inspire sympathy, admiration and dread. 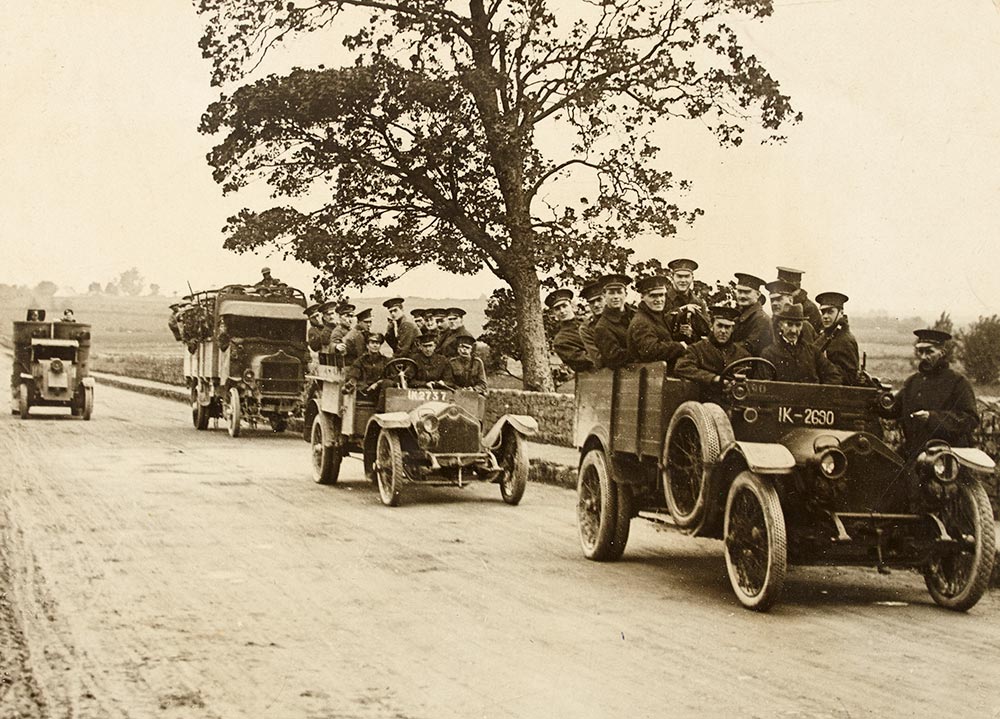 Members of the British military and the Royal Irish Constabulary near Limerick, c. 1920

These are quite recent events—only 100 years ago today the Irish War for Independence ended when the Anglo-Irish treaty was signed and the status of Free State for Ireland emerged. This agreement was finally reached after five years of continuous guerrilla warfare causing the deaths of hundreds of civilians and soldiers and eliciting the garnered attention of the whole world.

These treaty negotiations were hampered by continued hostilities on both sides. An agreement might never have been reached if England’s Prime Minister had not threatened to resume outright war if his deadline of three days was not met. So it was that the Anglo-Irish Treaty was signed at two in the morning on December 6, 1921. The noteworthy signatories on it include Prime Minister Lloyd George, Lord Birkenhead, Arthur Griffith, Winston Churchill and Michael Collins. The latter wrote his fiancé that same day: 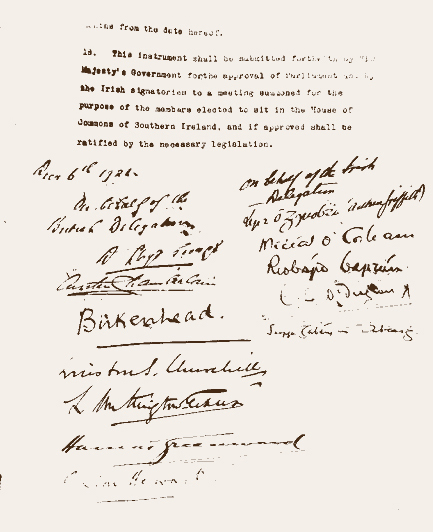 “I think what have I got for Ireland?. . . Something which she has wanted these past 700 years—will anyone be satisfied with this bargain, will anyone?. . . I don’t know how things will go now but with God’s help we have brought peace to this land of ours—a peace which will end this old strife of ours forever.” 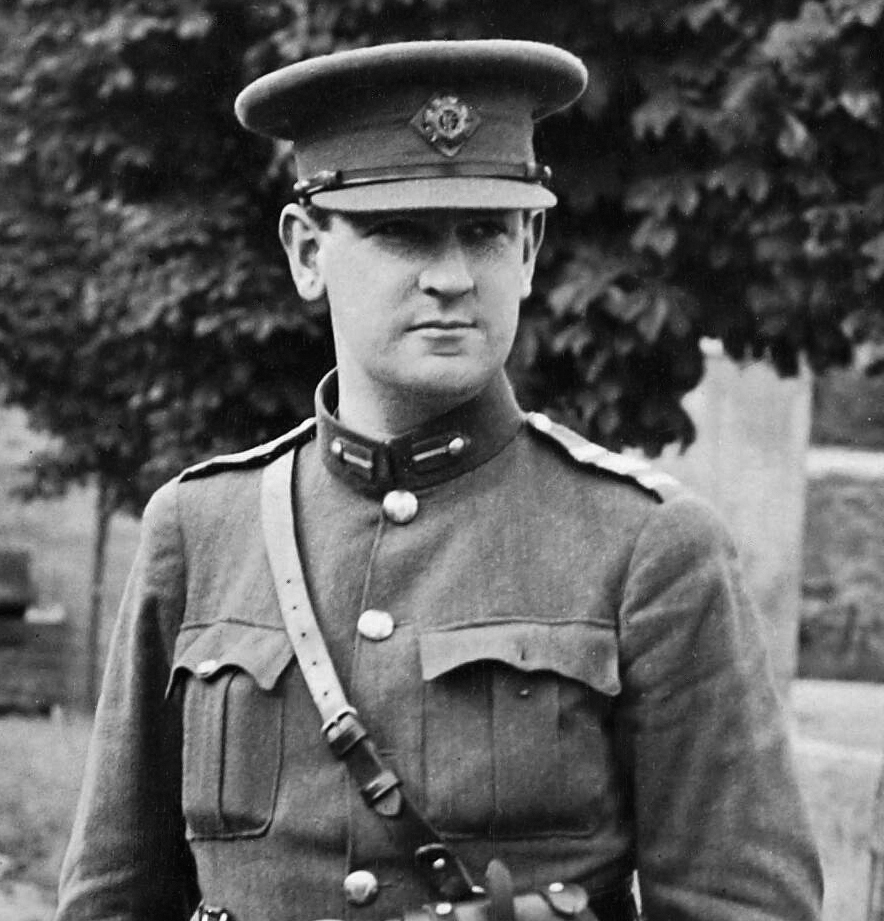 To some, the Treaty was a shameful compromise. To the visionary Collins and many others it was the first giant step towards a free Ireland. As he put it, “It gives us freedom, not the ultimate freedom that all nations desire. . . but the freedom to achieve it.” This did not prevent civil war from breaking out in Ireland after the treaty was accepted and ratified by both popular vote and Ireland’s government. The vote was close and ratification was rushed. Tragically, the treaty was outspokenly condemned by Ireland’s sitting President, Éamon de Valera. This was the spark that ignited further division and outright civil war. It wasn’t until 1937 that Ireland became a fully self-governing republic. 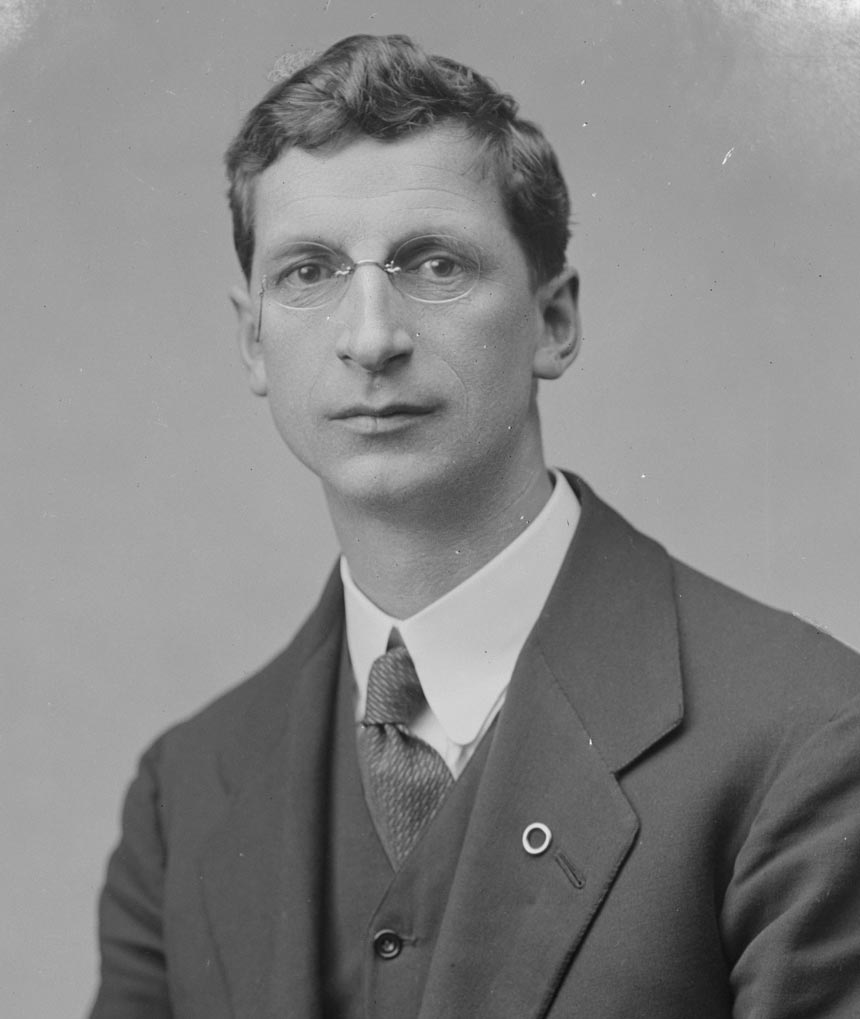 Once submerged in the details of Ireland’s struggle, it’s easy to identify some of the aspects that may apply to our current political turmoil. It is worth noting that despite its current obscurity, the methods the Irish Republican Army used against the British empire became the acknowledged prototype for guerrilla warfare in the 20th century.

Firstly, this was a war fought by entire families. By that I mean every every man, woman and able child considered it natural and dutiful to assume a role in fighting for self governance, both together and separately: The women furtively carried censored ballots and information in the handles of their milk pails for the purpose of passing intelligence. Children kept watch for and spied on soldiers at street corners as a regular day job. And the men split their duties between earning a living and dismantling a corrupt empire—the latter requiring a vast array of talents.

Secondly, a strong unity of purpose prevailed, and even those citizens not as compelled by revolutionary impulses were loath to turn in a neighbor. This unity may have been the single most important ingredient that made their cause so effective. One significant result was wide-spread confusion in the British intelligence service as their policy was to arrest or execute all suspected civilians in order to maintain martial law. 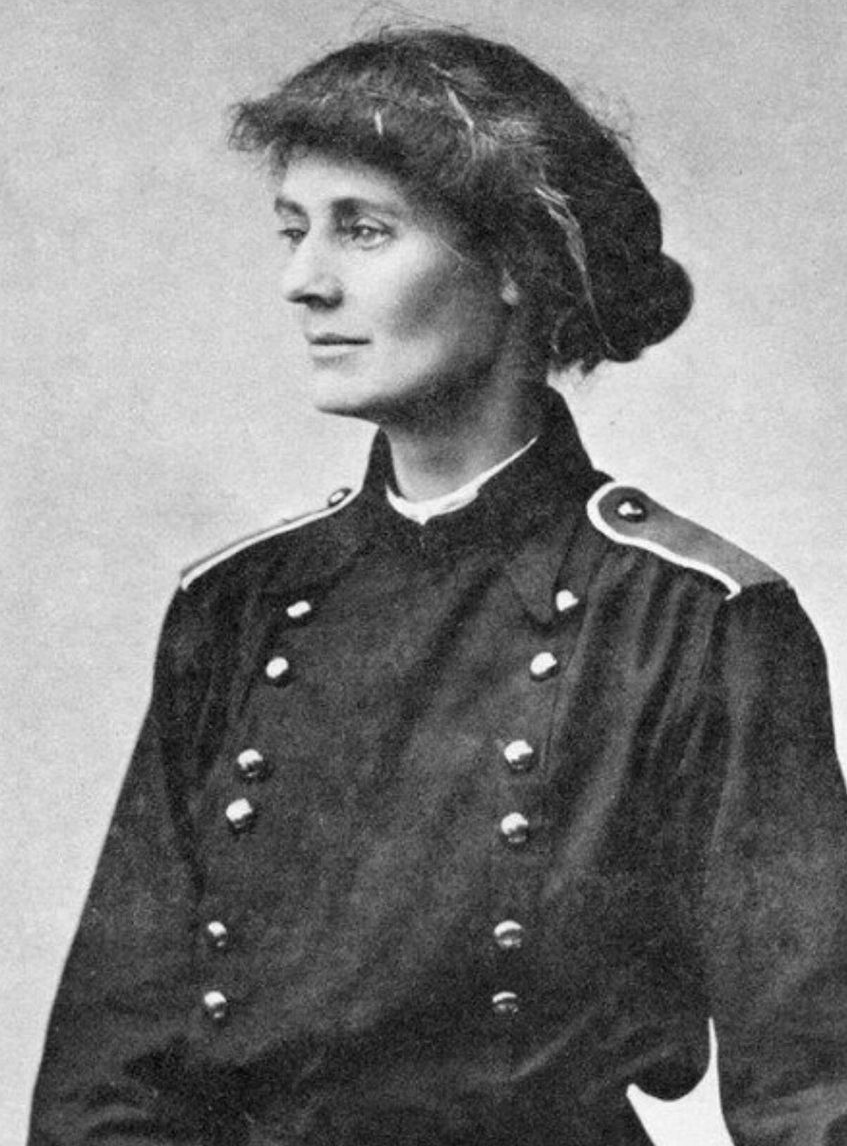 Constance Markievicz (1868-1927) was a founding member of the Irish Citizen Army, and took part in the Easter Rising in 1916, an attempt to end British rule and establish an Irish Republic

Tragically, many of these families who had fought so ferociously together before the treaty soon turned against one another in the Civil War that followed. While Britain was left in peace, the Irish fought amongst themselves so mercilessly that they left Ireland a wrecked shell of its former ideal. This infighting and terror did not fully stop until the 1990s and the inbred distrust within the nation still haunts each succeeding generation. 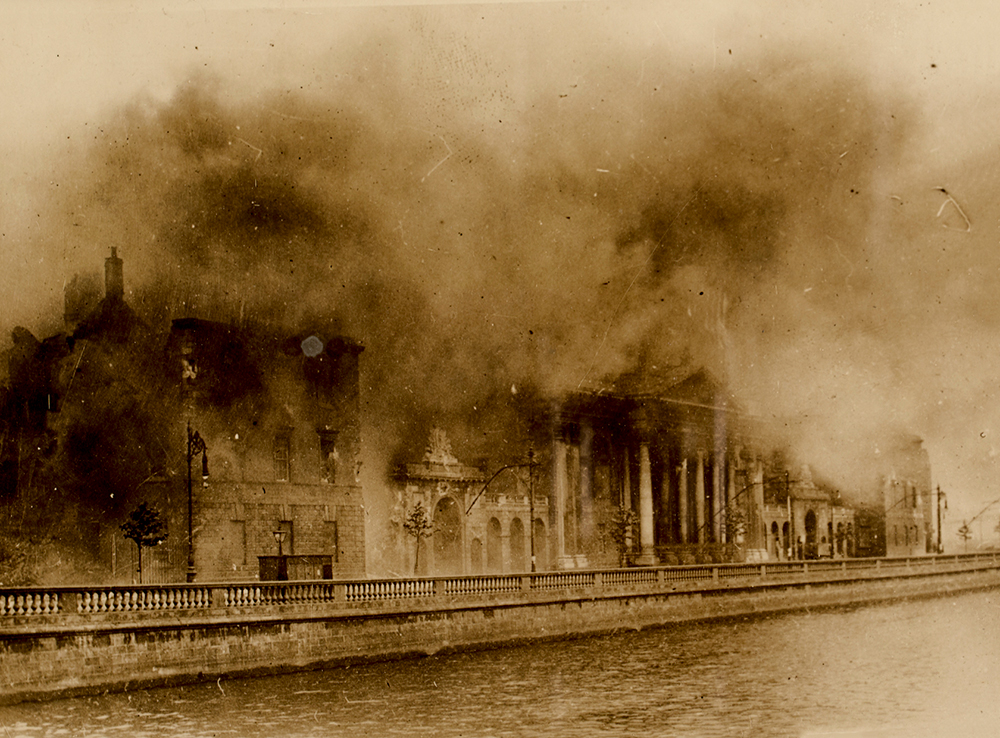 In April 1922, Anti-Treaty forces had taken over the Four Courts building in Dublin. The subsequent bombardment by National Army forces in June led to a huge explosion of stored munitions which destroyed the Public Records Office, and along with it a huge swathe of Irish cultural memory

Thirdly, this was a propaganda and information war. The tactic of fighting the British in open combat was nearly eliminated after the doomed Easter Rising of 1916. Instead, the Irish focused on securing the ballot box and infiltrating the network of British spies and assassins. This British network had proved successful at crushing previous uprisings by arresting Irish leaders at the very first suspicion of revolutionary activities. The methods the Irish Republican Army used to achieve this control over government Intelligence were brutal and condemned by the British as unethical. This, however, did not serve to deter the British from inflicting upon the Irish people equally brutal reprisals. 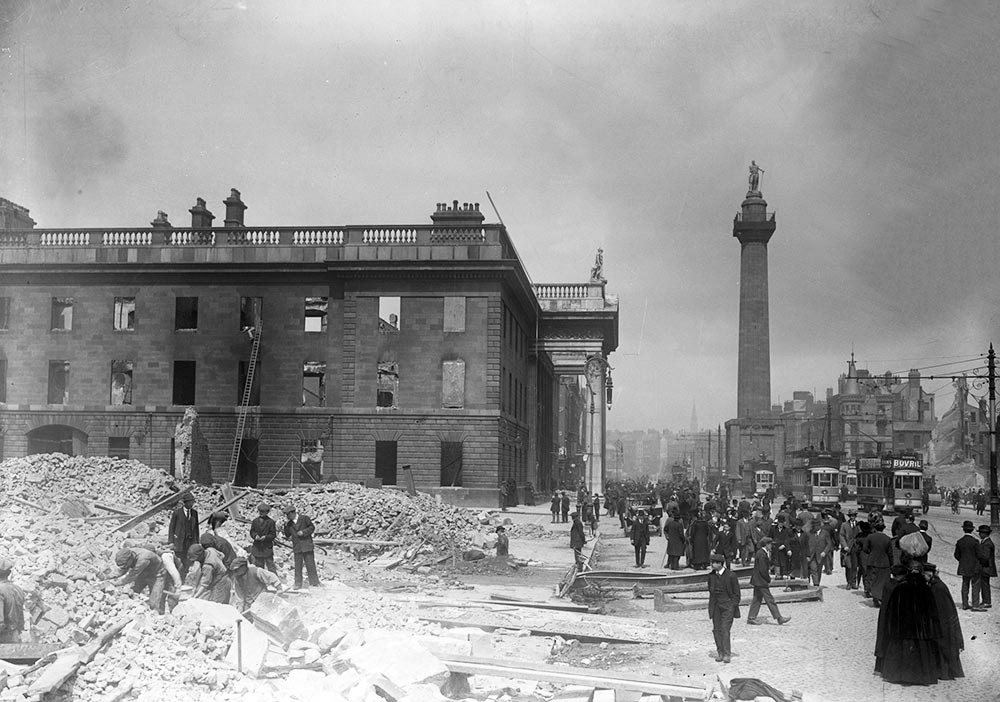 The aftermath of the Easter Rising, a failed attempt to throw off the British government and establish an independent Irish republic

Lastly, unlike many previous uprisings, this final war was the product of a long nurtured cultural struggle known as the Gaelic Revival. There was a general acknowledgment by the generation’s leaders that their long outlawed culture, language and history had to be revived. They knew this heritage must be learned and valued by Ireland’s youth before any martial attempt would be blessed with lasting success. 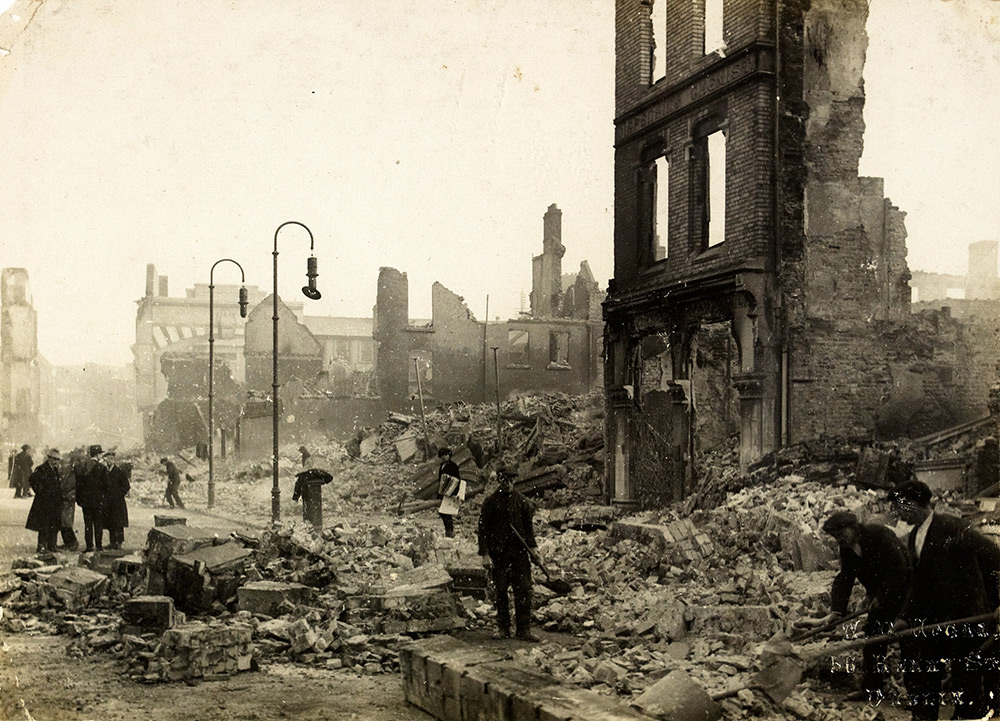 The aftermath of The Burning of Cork by British forces December 11-12, 1920

With this purposeful throwing off of imperial indoctrination, there grew an ever increasing admiration for America’s founding documents and principles of liberty and self government. Catholic Ireland’s struggle—as in the contemporary communist Revolution of Russia, or even that of the French—was to justify the singularly Protestant assertion that freedom is a God-given right. Asserting that freedom can neither be claimed nor earned, but is a right inherited from God, the one true Lawmaker, dictates that neither Popes nor ordained Sovereigns can take that away. The inhabitants of County Cork found themselves in the thick of this dilemma when the Pope excommunicated the entire county simply for defending their homes as British troops set them ablaze!

In conclusion, in a Christian nation, methods of warfare matter. And when you have once pushed the moral line of conduct against your enemy, it is shockingly easy to use the same methods on your friends, given provocation. By doing so, you destroy what you once fought for and greatly risk destroying the collective conscience of your nation.

Unity in any human endeavor is a miracle without which any struggle is doomed. The prioritizing of self-importance and grudges above truth and duty can divide even the closest of comrades. Comparing other revolutions, however well intentioned, to our own, confirms to us the momentous presence of our merciful God in the crafting of the United States. Many noble people have, in their own countries and lifetimes, striven in vain for the glorious outcome which graced our War for Independence. God makes the time right for revival and prosperity, and a repentant and humble people is a unified people. 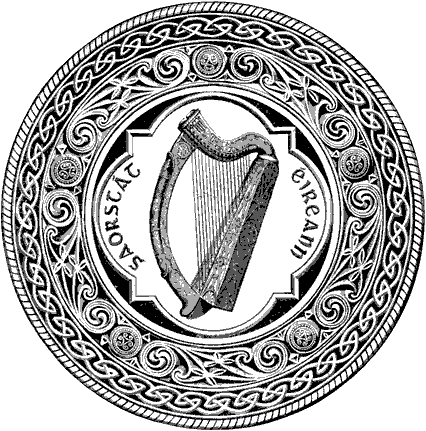 But thank God there are in every generation, even in Ireland, men with vision and devotion who will give their lives for the advancement of truth, even if they do not live to reap its full harvest. And in a country of storytellers, such as Ireland, those dead heroes are never far from the mind and heart of each subsequent generation as they fight for truth and liberty.