Lessons from ‘Unbroken’ and The Life of Louie Zamperini 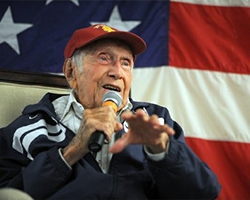 On the recent passing of war hero Louie Zamperini, a dear friend recommended that I read the stunning biography, Unbroken.* I was prepared to be stirred by this heroic account but nothing could have prepared me for the mass of lessons and inspiration I took from it. The overarching theme of the book is redemption — redemption proclaimed so clearly, so gloriously that I doubt it has a superior.

Not only does the life of Louie Zamperini hold stories of resilience and courage beyond any fiction writer’s dream, but it is interwoven with subtler themes. I’ll focus here on one: the powerful and beautiful example of brotherly love.

Louie’s rise from the town rogue and outcast to the youngest Olympian runner on record was anything but predictable. Reading about his life and marveling at the impossible challenge he was when a boy, I couldn’t help but imagine the pain of motherhood of such troublesome young boys.

Louie was the personification of a bad boy. He stole, he fought, he had no friends except for the urchins who followed him in crime. Above all else, he had a strong hatred of authority. He was both obstinate and surprisingly optimistic. He did something bad, he was punished for it but then did it again just to prove he could.

His mother saw her younger-self in him and grieved over his untamable spirit. She was often sick with worry but she believed that the same determination he exhibited in mischief could be a great attribute if directed and added to discipline. But to Louie, discipline meant constraint and for many years he refused to have any part of it. That is until the day his older brother decided to make it his mission to reform him. Pete had a vision for Louie. He saw beyond the rough exterior and saw his giftings; he saw where Louie’s willfulness could take him if directed and encouraged. 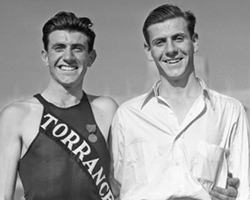 This is where Unbroken begins an awe-inspiring chronology of true-blue brotherly love and sacrifice. Pete fought for Louie; he believed in him. He was his earthly source of hope and love when most everyone else had written him off as a loser. Pete used his own amazingly prolific popularity to win school fellows, principals and the community at large to his cause.

After much effort and time, Pete managed to get Louie on the track team, after he had been previously banned from such activities. Pete reasoned to Louie that his speed was his saving grace when escaping the police, so why couldn’t he succeed at a foot race? Pete himself was an amazing runner and a source of pride for the school. Louie eventually admired him for it.

In Louie’s first race he was beaten terribly and was greatly discouraged. Someone on the sidelines commented that Louie belonged anywhere but in a foot race. “He’s my brother,” was Pete’s unashamed defense. He refused to be embarrassed or give up his rehabilitation of Louie.

But besides being an exemplary coach, Pete proved himself to be a vital confidant. As Louie began to soften, he began to desire not only an encourager but an understanding friend. Late at night, sharing their twin bed, as they had since early childhood, Pete became the ear Louie needed for confessing his surrender, without fear of condescension or mockery. 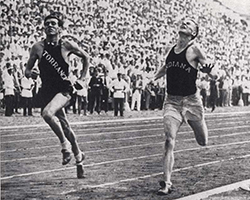 The lessons I learned from Pete Zamperini’s example are numerous. He gave up everything for a brother others deemed unworthy of his investment. He watched in glee as his own running records and claim to fame were abolished by his baby brother. Louie became a sensation as Pete contented himself victory hugs for Louie at the finish line.

In World War II, when the brothers were separated, it was Pete’s inspiring one-liners, glorifying the determination to overcome hardship and pain, that helped Louie remain unbroken through unimaginable horrors. The voice of his brother who was there for him for every record-setting race, was with him for a record-setting 47 days adrift on a raft in the Pacific and over 2 years in a Japanese POW camp.

Since both men lived into their 90s, living only a few miles apart, their lives became an impressive collection of stories varying from humorous to deeply inspiring. After Louie’s beautiful and dramatic conversion to Christianity after the War, he set up a camp outside Los Angeles for unruly boys for the purpose of redirecting their energies and ultimately pointing them to Christ. Pete, as full of energy and delightful enthusiasm as ever, came alongside and they invested themselves in the lives of countless boys. 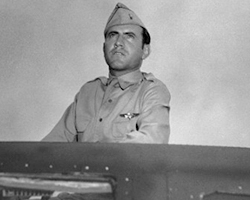 Before Pete’s death in 2008, God provided the brothers one last moment together. Louie laid down beside the gravely ill Pete in the tradition of their growing-up years, and began to reminisce. As Pete lay with his eyes closed and his face blanched with pain, Louie began to speak of the many moments they had shared and thanked him for all that he had invested in him, races run, Pete’s birthday cake serving as Louie’s wedding cake on his impromptu marriage and all the boys’ lives they had touched together since they started the camp.

Unbroken author Laura Hillenbrand beautifully describes their last moments. Referring to the boys in the camp:

“‘All of those kids,’ Louie said, ‘are part of you, Pete.’ Pete’s eyes opened and with a sudden clarity, rested on the face of his little brother for the last time. He couldn’t speak but he was beaming.”

So ended the life of one who truly followed our Savior’s example of loving the unlovable, being that brother who sticks closer than a friend. I was deeply moved by his example; selflessness doesn’t come naturally. It is human nature not only to put oneself forward but some times to crush others and use them as stepping stones for one’s own ambition. “Be all you can be” is the motto of this generation, and in getting there, methods don’t matter. Striving towards excellence is a Christian attribute but our Lord said it is better to give than to receive.

Louie was a celebrity and war hero, inspiring ever-growing numbers of people with his message of God’s gift of redemption. But without Pete, the once delinquent boy may have remained a troublesome young man and the world would have been deprived of this beautiful soul and this example of God’s glorious redemptive work.