Why Landmark Tours? A Case Study at The Old South Meeting House 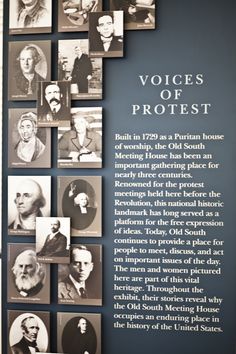 The Old South Meeting House was home to one of the most important of the Puritan and later, Congregationalist, congregations in Boston. It has been beautifully restored and preserved, and is a main stop on the Freedom Trail. As the largest building in colonial Boston, Old South was the scene of public and political meetings, the most important of which was the gathering in 1775 of 5,000 people, after which occurred the “Boston Tea Party.” In 1886 the congregation sold the building and it became a museum and historic landmark as well as a public meeting place. In the 20th century, Old South became a venue for individuals and groups who held controversial or unpopular ideas to give vent to them in a public forum. The overall theme today is “protest and revolution” and “free speech.”

Central to that theme is a display adorned with the portraits of “the voices of protest,” people who should be admired because their cause was just but unpopular, and who were unafraid to publically argue their beliefs. The images are juxtaposed in such a way to identify them together as equals and free speech defenders of good causes. And there they are, side by side, George Washington the great general and President of the United States and George Whitfield, the powerful preacher who witnessed the saving power of God through his preaching in Boston and throughout the colonies, and between them, in equal display and celebration is the promiscuous high priestess of the eugenics movement and founder of Planned Parenthood, Margaret Sanger. The message is clear, America stands for pluralism, dissent and revolution. There are other images on the display, including Socialist Party candidates and other rebels with a cause, a not so subtle reminder that the political and moral principles of the early generations would give way to the opposite beliefs, just as ancient, but dressed up in the new rags of modernity.

To the school groups that pass through that museum, the ancient Gospel message that was proclaimed from the Old South pulpit that God is Sovereign and has an immutable law to which man is accountable and that he is a sinner in need of redemption by the only Savior of mankind, the Lord Jesus Christ is not brought to mind. Those beliefs, left untaught, are relegated to the misguided mythologies of a dead past. We teach them without apology and we glory in standing on the ground where great spiritual revival changed the lives of people and society. In the museum tour, George Washington is mentioned as the first president. Memorize it but do not dig any deeper for he is just another dead white male slaveholder who helped bring a Constitution into being that is irrelevant to our own times. When we pass through, our message is to see the hand of God raising up a leader to bring into being a free nation based on law. We see the many ways Washington was preserved from harm and elected to lead the new nation to be first among them all.

The museum tour elevates the Margaret Sangers who championed promiscuity and “birth control”, eugenics to reduce the poor and immigrant populations and gave a voice to the movement known today as “feminism.” She was resisted and vilified in her day but now is admired and accepted as a brave historical figure who suffered to bring us the world we live in now. The socialists who railed against capitalism and cried out for a forced leveling of all men are now in the seats of power. We not only show the contrast between the eternal truths and the modern philosophies, we encourage the next generation to stand for right and fight the forces that destroy our national heritage. It is one thing to know the difference between the messages of Whitfield and Washington versus Sanger and DuBois, it’s quite another to express them publically and argue for the truth with those who do not know or who actively oppose. Our tour of the Freedom Trail could hardly be more different from the prevailing political and social ethos of our day.