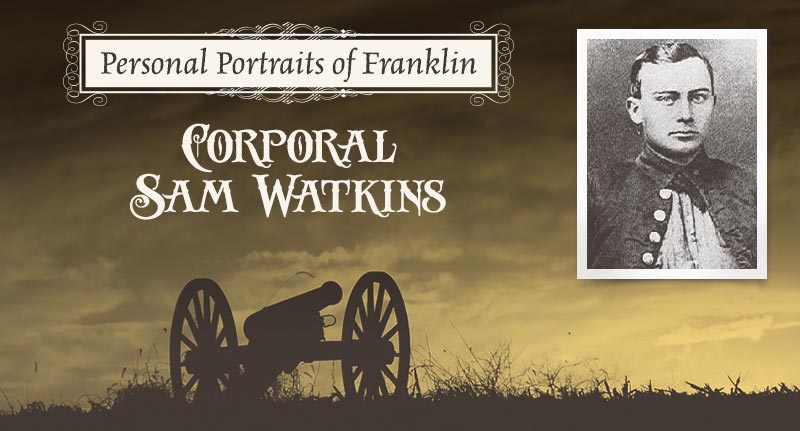 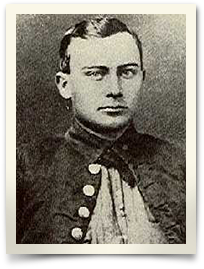 Sitting in his home, nestled in the rolling hills of Maury County Tennessee in 1882, Corporal Sam Watkins penned perhaps the most widely read and detailed look into the life of a man who fought and bled throughout the most difficult 4 years of our nation’s history. His work, “CO. Aytch” chronicled the Civil War through the lens of an ordinary man, a foot soldier, representing the grunt and backbone of the Confederate army.

His wartime autobiography remains one of the best first-hand regimental histories to be found, documenting the glamorous and tragic history of the 1st Tennessee Infantry regiment. Private Sam Watkins witnessed and records the death of many of his old friends; he recalls the long marches, the arduous campaigning, the dullness of camp life and the horror of battle that he was exposed to in over a dozen major engagements.

“Kind Reader, right here, my pen and courage and ability fail me, I shrink from the task of that dreadful butchery. Would to God I could tear the page from these memoirs and from my own memory… I cannot describe it, it beggars description. I will not attempt to describe it, I could not.”

There are many detailed accounts of soldiers and civilians throughout the civil war. Equally as fascinating, in the case of Franklin, are the non-accounts. These old soldiers, who documented and gave narratives of battle experience at other major engagements, seemed unable or unwilling to describe the horrible events of November 30, 1864. This may be as telling as a descriptive discourse of those same events.

Sam Watkin’s own Tennessee Infantry regiment was deployed for battle at 4 p.m. about a mile and a half south of the town of Franklin. Along with 20,000 other troops, they were ordered forward across a wide open field toward the Union entrenchments. The artillery and small arms fire wreaked havoc in the Confederate ranks. Private Watkins was quickly engaged in one of the most brutal and costly hand-to-hand fights of the entire war. Much of the fighting took place in the darkness. After 5 hours of struggle the fighting ceased, leaving 10,000 Americans as casualties on the field.

Sam Watkins ends his brief narrative of the battle of Franklin with this:

“Kind friends, I have attempted, in my poor and feeble way to tell you of this, (I can hardly call it battle). It should be called by some other name, but like all other battles, it, too has gone into history. I leave it with you. I do not know who was to blame. It lives in the memory of the poor old Rebel soldier who went through that trying and terrible ordeal.”

He goes on to say:

“A life given for one’s country is never lost. It blooms again beyond the grave in a land of beauty and love. Hanging around the throne of sapphire and gold, a rich garland awaits the coming of him who has died for his country.”

Of the 3,200 men that mustered into service in Sam Watkin’s beloved 1st Tennessee Regiment, he was one of only 65 men that remained alive after it was paroled at the end of the war.

Corporal Sam Watkin’s life ended in peace surrounded by his family and friends in little Columbia, Tennessee. But his writings will forever stand as a vivid reminder of times gone by, and by God’s grace, never to be repeated.