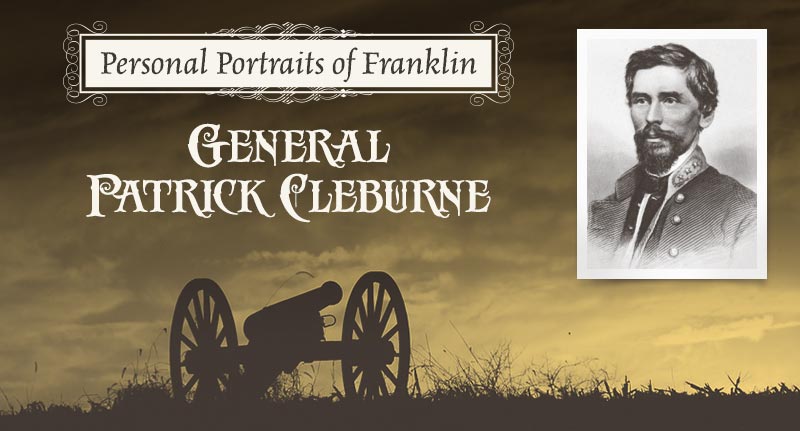 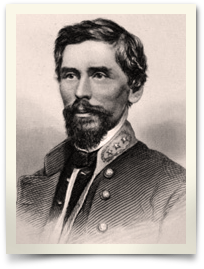 “If we are going to die, then let us die like men.” These were the last recorded words of General Patrick R. Cleburne, uttered to his men at the battle of Franklin shortly before advancing his division forward into the jaws of death.

This exceptional Christian man was born in County Cork, Ireland on March 17, 1828. Beginning his career in the field of medicine, he quickly realized that he was not cut out to be a doctor. At age 19, Patrick enlisted in the 41st Infantry regiment of the British army. Having joined the army at a dull and uneventful period in Britain’s military history, he subsequently bought his discharge and immigrated to the United States, joining thousands of his fellow Irishmen in one of the largest mass immigrations in our nation’s history. Eventually, he settled in little Helena, Arkansas and was rapidly inducted into southern society. Cleburne grew to love his adopted state and the people in it, making friends and acquaintances who would remain at his side during the war that erupted between North and South.

When Arkansas seceded from the Union and armies began to form, Cleburne once again returned to military life and threw in his lot with friends and neighbors to defend their homes. Because of the young Irishman’s former training and military experience, he rose quickly through the ranks, eventually rising to the rank of Major General, commanding one of the best and hardest hitting divisions this country has ever known. Early in the war at the battle of Richmond, Kentucky a bullet crashed through his face and shattered his teeth. He paid little mind to the injury and continued to deliver orders to his men until his mouth swelled to such a degree and he could not speak. This kind of dogged-determination and courage was something that “Pat” Cleburne’s men saw often, spurring them on to the same virtues, creating a fighting machine capable of defending or attacking against the greatest of odds.

General Cleburne became legendary for his military prowess, and was indispensable to the Army of Tennessee. General Robert E. Lee referred to him as, “A meteor shining from a clouded sky,” while others nicknamed him, “The Stonewall of the West” as he mimicked his eastern theatre counterpart, “Stonewall” Jackson in battle tactics and military genius. As the war progressed, many began to look to that 36 year old Irishman to become the next army commander for the Confederacy in the west.

This hope for command in the west soon evaporated when Cleburne proposed a radical plan that would have insured southern independence -but a plan extremely unpopular among the confederate high command and aristocracy. Late in the war, as casualties mounted and eligible southern white males were becoming increasingly difficult to find, Cleburne composed a document to be sent to the Confederate Congress which detailed a plan to grant any African slaves their freedom if they joined the confederate ranks and fought for the duration of the war. The general stated in this document:

“Satisfy the negro that if he faithfully adheres to our standard during the war he shall receive his freedom and that of his race … and we change the race from a dreaded weakness to a position of strength. Will the slaves fight? The helots of Sparta stood their masters good stead in battle. In the great sea fight of Lepanto where the Christians checked forever the spread of Mohammedanism over Europe, the galley slaves of portions of the fleet were promised freedom, and called on to fight at a critical moment of the battle. They fought well, and civilization owes much to those brave galley slaves … the experience of this war has been so far that half-trained negroes have fought as bravely as many other half-trained Yankees.

It is said that slavery is all we are fighting for, and if we give it up we give up all. Even if this were true, which we deny, slavery is not all our enemies are fighting for. It is merely the pretense to establish sectional superiority and a more centralized form of government, and to deprive us of our rights and liberties.”

At this point in the war, Cleburne’s proposal was viewed as a desperate measure and vigorously opposed. Although this plan would eventually be utilized by the struggling Confederacy, it would be ignored until too late.

Life goes on in wartime. During a brief leave-of-absence in early 1864, Cleburne’s met, courted and became engaged to the beautiful Susan Tarleton of Mobile, Alabama. Tragically, their union was never to be, for they parted for the last time in the fall just prior to the Tennessee campaign.

As the Confederate army passed through Columbia en-route to Franklin, Patrick and his men neared the beautiful St. John’s Episcopal Church, nestled in a rural setting off the Columbia turnpike. Cleburne admired the beauty of the spot and perhaps it was the gothic style architecture, reminding him of his native Ireland, that caused him to remark to his staff, “It would almost be worth dying to be buried in such a spot.” Little did he know, he would be laid to rest in that very ground a few days later.

Before the attack commenced at Franklin on November 30th 1864, Cleburne surveyed the Union entrenchments south of town and subsequently and unsuccessfully argued against a frontal attack, along with a number of other generals.

Dutifully, as the orders were given for the advance, Cleburne and many other top ranking officers led their men forward. Once again leading by example, Cleburne posted himself at the head of his column, uncommon for a division commander, but staying true to his commitment -that if he was to die, he would die like a man. Being pierced through the heart at dusk, Major General Patrick Cleburne’s life was ended, and as many southerners believed, so were any hopes of independence.

Through his life and in his death, Patrick embodied a spirit of manhood and fierce determination that would forever remain in the hearts and minds of his men, and even that of his enemies.

William J. Hardee, Cleburne’s former corps commander, had this to say when he learned of his loss:

“Where this division defended, no odds broke its line; where it attacked, no numbers resisted its onslaught, save only once; and there is the grave of Cleburne.”