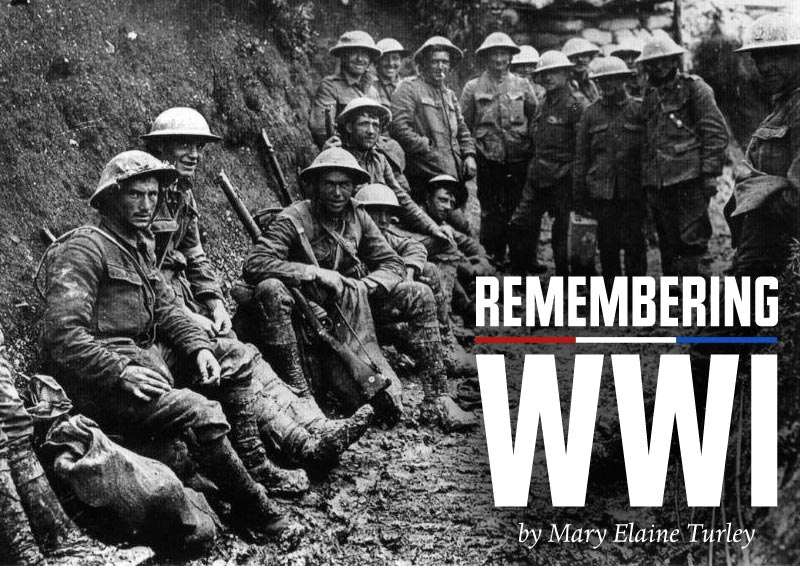 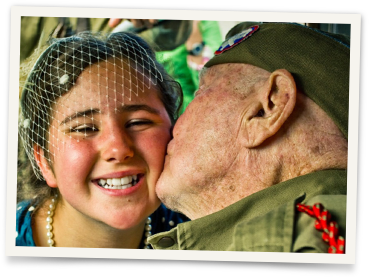 One-hundred years ago today marks the beginning of the First World War as Britain declared war on Germany. This epic event in history is as heartbreaking as it is reproachfully forgotten. This is a tragedy.

Despite the horror, confusion and perceived meaninglessness of the Great War, as a Christian, I have a duty to mine for a deeper meaning and relevance. More is required than mere reluctant admiration for the “mis-led brave” or acceptance of the ironic epithet of “the war to end all wars.”

Forever a symbol of butchery and useless carnage, World War I is rarely remembered for the good, the noble and the brave. The selfless sacrifice of the countless brave, who would go on to play a role in future epic events, seems all but forgotten. 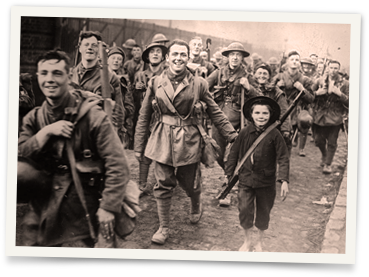 In interpreting history, I believe it unnecessary to eliminate the grief or consequences of war, but rather by being attentive to its refining and shaping influence in the men whose shining time was yet to come, I see hope. I see this trial by fire as providing a host of role models for the next generation, who would later prove their worthiness of honor in their efforts to vanquish the next prevailing tyranny.

Initially, a war provoked by the assassination of the Austrian Archduke by a Serbian rebel, it would soon become a blood bath involving over forty countries and taking the lives of more than 16 million men, women and children. It became a war like none other in an age filled with ingenuity and barbarism, chivalry and callousness. It was a war where brave cavalry men, the last of their kind, charged the new invention of machine guns, while the modern marvel of flying machines engaged in dog-fights overhead.

Despite the use of some of the most brutal methods ever known to warfare, soldiers had no private quarrel with one another, sometimes resulting in the formation of strange friendships in the notorious “no man’s land”, adding yet another element of emotion and confusion to the war’s aftermath. 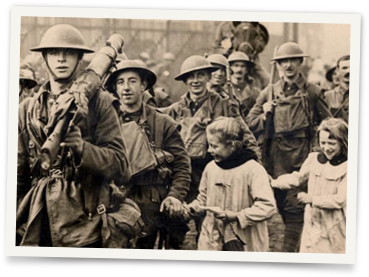 In Germany, Nazism was barely in its infancy and those who fought in the First World War were often opposed to Hitler in the second. Their children, however, being the offspring of defeated and demoralized men and educated in the national socialistic schools, found their hope for redemption in militarism and eventually, Adolph Hitler.

In America, fresh young men such as George Patton, Harry Truman, Dwight Eisenhower, William Donovan, Alvin York and many, many others would have their first experience of war during the years of 1914-1918. Their names would become a vital inspiration to the coming generation who landed on the D-Days in Normandy and Italy and went on to conquer the insurmountable obstacles in the Pacific at Iwo Jima, Guadalcanal, the Philippines and many others.

In England, this war proved its purpose, in part, in the honing and testing of men whose names are now synonymous with defiance of Nazism: Young men such as A. Duff Cooper, Harold Macmillan, Anthony Eden, Clement Atlee and others. These young men were spared by God through this terrifying conflict. They were later to be used in Parliament in a battle of passion and eloquence, crucial to the nation’s valiant stand against Hitler. These men, survivors of a near obliterated generation, were critical to propelling Churchill to power, without which, England would have met with certain defeat in WWII. 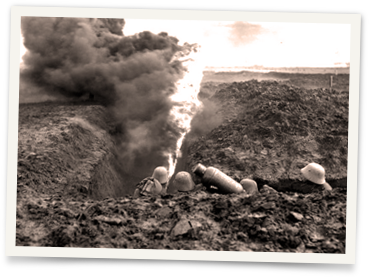 Additionally, without the indomitable courage and resolve of these same Brits -and their willingness to risk their own lives and, dearer still, those of their sons- our lives would be immeasurably altered.

In four years, primarily in Europe, nearly an entire generation was sacrificed. An eligible man was a rarity in post-war years. Initially, these soldiers were welcomed home as heroes, but as the losses and the horrors of war became clearer, a cynical mood enveloped their homelands.

Gone was a generation of men who embodied Christian heroism and nobility, men of the Titanic era, men who risked it all for the weak, men who were devoted to duty over privilege. They were of those men who had devoted their lives to the conquering of the ice-bound Poles and embrace—like no other generation who succeeded them—that spirit of adventurous dominion. 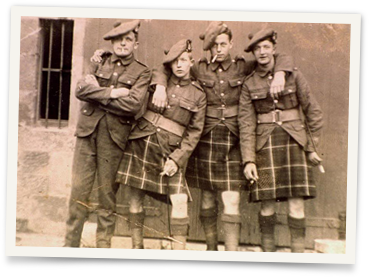 The years following the war, through the gaiety of the Roaring Twenties, underlying despair was prominent. Was the death of those men in vain? I believe not. It seems this attitude may have, for too long, shaped our thinking in regard to that war and thus, the men who served. But there is no conflict, not even one as murderous as the Great War, that is too dark for us to see the golden thread of Providence weaving its way through. Our merciful God, who does all things well, has a divine plan, a plan so complex in its infinite wisdom that we often fail to grasp all the hope and inspiration that is awaiting us as we study these stirring epochs.

Let us be a people who drink deeply from the lessons of history, of those noble men that it possesses. Let us not forget them or try to diminish the effect of their valor on each of our lives. Let us make it our determination to remember them, honor them and keep the memory of their valiant efforts. Their deaths were not in vain; they served and many were sacrificed to secure our precious freedoms.

Let us take heart from the lesson that God may seem to deprive the world of a generation of noble hearts but is always raising up another for His purposes, in His time. 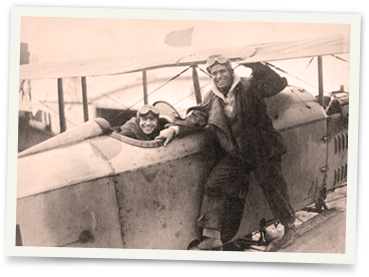 Opportunity is still ours, but not for long. I have had the privilege of meeting and speaking with a few of the remaining veterans of World War II. Seizing this opportunity, going back with them in time, when uncommon valor was a common virtue, has left me with precious memories and stories for my future children. These are men raised by the men of the Great War, sons of an Edwardian generation that prized honor, dignity, freedom, loyalty, Christian heroism, duty and the fear of God. They are truly the last of a golden generation.

So, on this anniversary, as we pause and consider the sacrifices of the men of World War I, sacrifices they made for us and our children, may we honor them, learn from them, tell our children of them and, by God’s grace, raise up another generation of their kind.