“They were equipped with bows, using both the right and the left to sling stones and to shoot arrows from the bow.” —I Chronicles 12:2

ad William Shakespeare not written Henry V (1599), the Battle of Agincourt (1415) may have remained but an obscure medieval battle between the seemingly interminable enemies, Britain and France. The engagement has taken its place among the great battles of European history due especially to the effect of the English longbow on massed French troops and the unequal losses of the combatants. Military historian John Keegan in his ground-breaking study of the anatomy of combat in The Face of Battle (1976), re-ignited interest in Agincourt. The battle rarely makes the list in books like 50 Battles That Changed the World (William Weir, 2004) or the classic The Fifteen Decisive Battles of the World (Sir Edward Creasy, 1851), but as recently as 2008 Bernard Cornwell, the best story-teller among historical novelists who write on the intimate details and foibles of battle, made the New York Times best-seller list with Azincourt, the battle re-told with accuracy and panache, but far too graphic for most of our readers. Agincourt made it to the big screen twice, the most recent being Henry V, directed by Kenneth Branagh (1989). 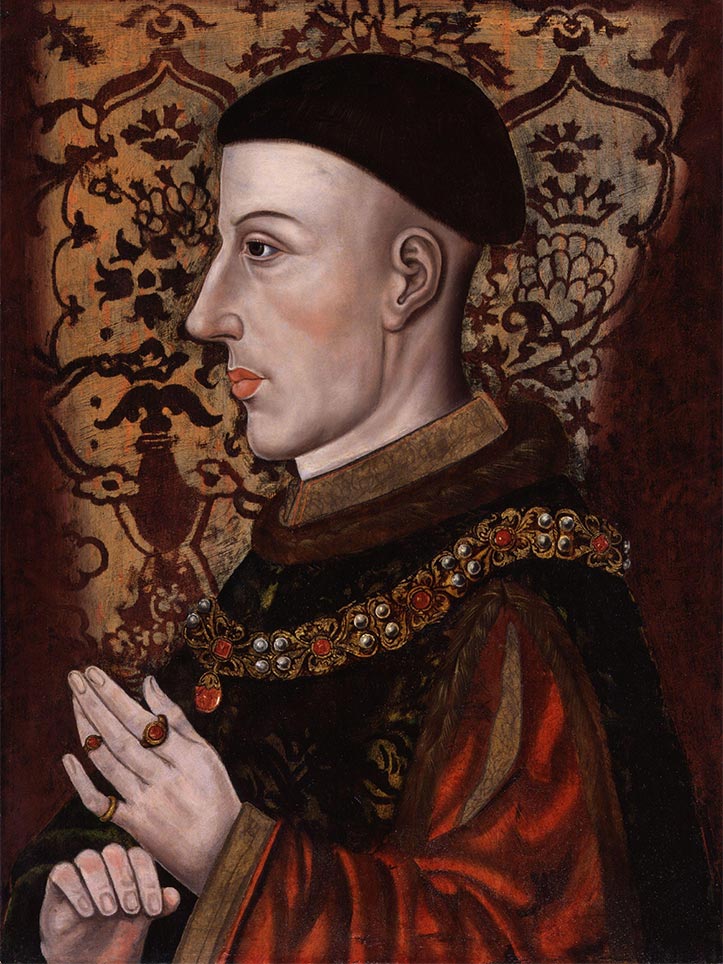 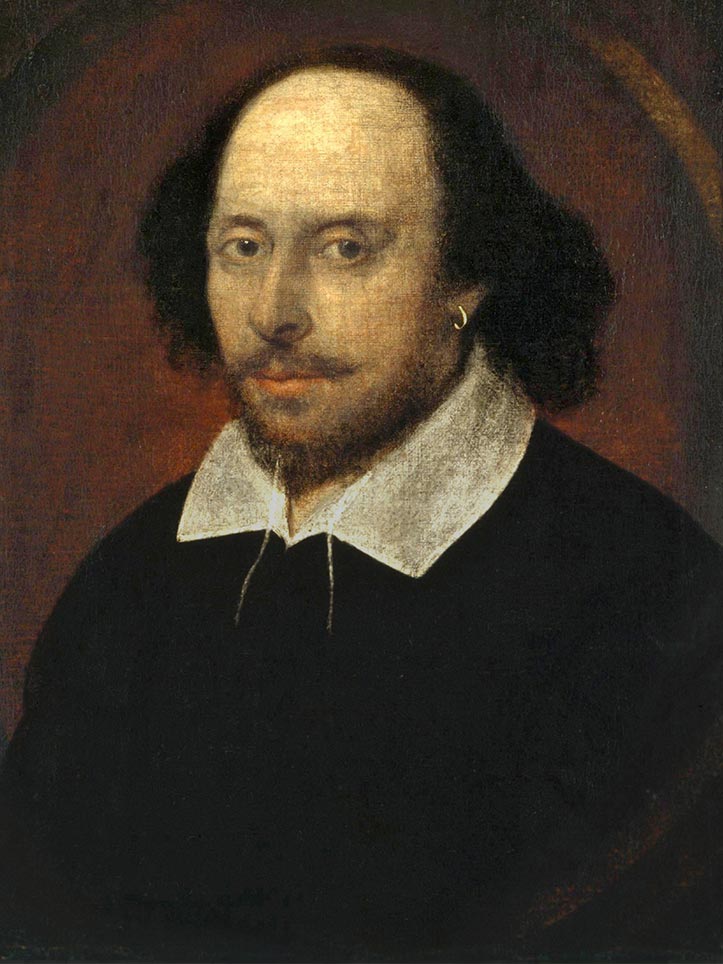 With his play Henry V, William Shakespeare (1564-1616) immortalized what may have otherwise remained an obscure battle

The setting for the battle was the Hundred Years’ War, which was an on-again off-again, dynastic struggle for the crown of France between the Valois Kings of France and the Plantagenet Kings of England for five generations, often engulfing many other kingdoms of Europe during the times of chivalry and medieval civilization. Henry, not the most charming or appealing of English kings, demanded several provinces of France as his due from both genealogical claim and Salic law. He included in the bargain the physically weak and addled French King’s young daughter, Catherine, for marriage. The counter-offer, though generous, was rejected by Henry as far too little and, perhaps, mocking. His council of nobles agreed to invade France, led by the young king himself. 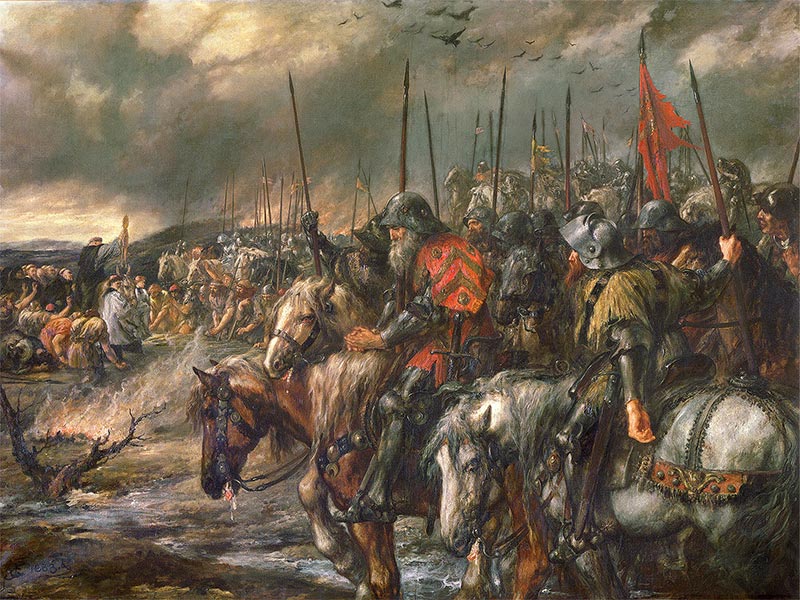 This 1884 painting by Sir John Gilbert depicts the morning of the Battle of Agincourt — October 25, 1415

The campaign consisted of a too-long siege of the city of Harfleur, a long, wet, starving, sickly march to Calais, suddenly blocked by a huge French army led by the Dauphin, son of the King. If ever the odds were stacked against a worn-out, bedraggled army, suffering from dysentery and eager to embark for home, this was it. Henry, however, determined to fight it out and leave the consequences to God. 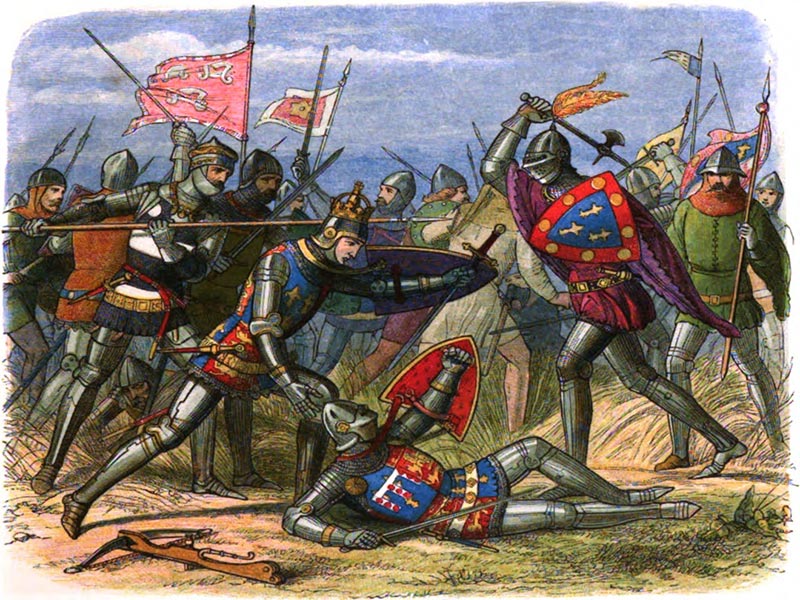 John I, Duke of Alençon fights against King Henry V and Edward of York at the Battle of Agincourt

The key to victory in most medieval battles was the armor-clad knights and noblemen, normally mounted, and the men-at-arms prepared to fight on the ground with sword and lance. Best estimates number Henry’s men-at-arms at 1,500 with 5,000 archers. The English archers had trained from their youth in the skills of the longbow, made from ash, and equipped with dozens of deadly arrows. The archers wore no armor but carried self-defense weapons like axes, knives, and mauls. 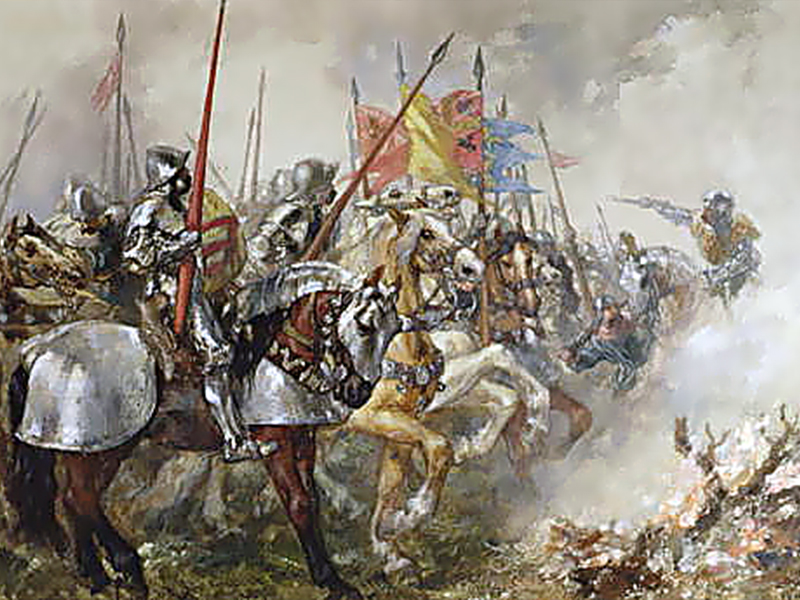 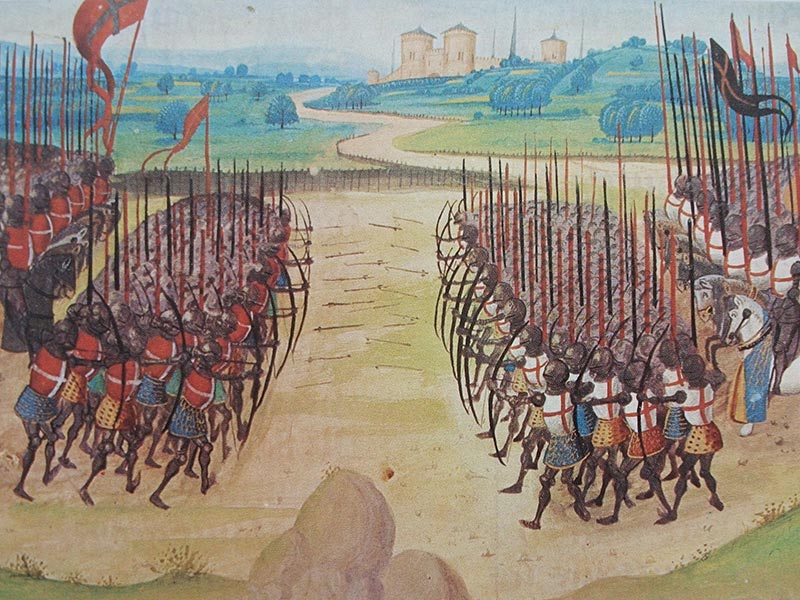 Henry positioned his army between two forests with wet plowed ground in front. He delivered a speech to his assembled knights that, in the pen of Shakespeare, has become a by-word for courage, resolve, and military brotherhood. Some believe the French forces totaled about 50,000 men, with more racing to join them. The mounted knights arrayed themselves in front of the men-at-arms and other infantry, hoping to mow down the English knights in quick succession. Seizing a rich enemy as prisoner could bring ransoms that far exceeded their own wealth and set them up economically for life. Impatient for the arrival of reinforcements, enticed by the rich prizes arrayed before them — including the King of England — and insulted by the impudence of their foe, the French cavalry charged. The sharpened stakes of the archers forced the French cavalry into a narrow, sticky killing ground. The clouds of longbow arrows brought down many horses, which clogged the escape route and impeded the infantry attack. The French men-at-arms fell in the mud and were suffocated and trampled while the rear soldiers pushed to get within sword range. 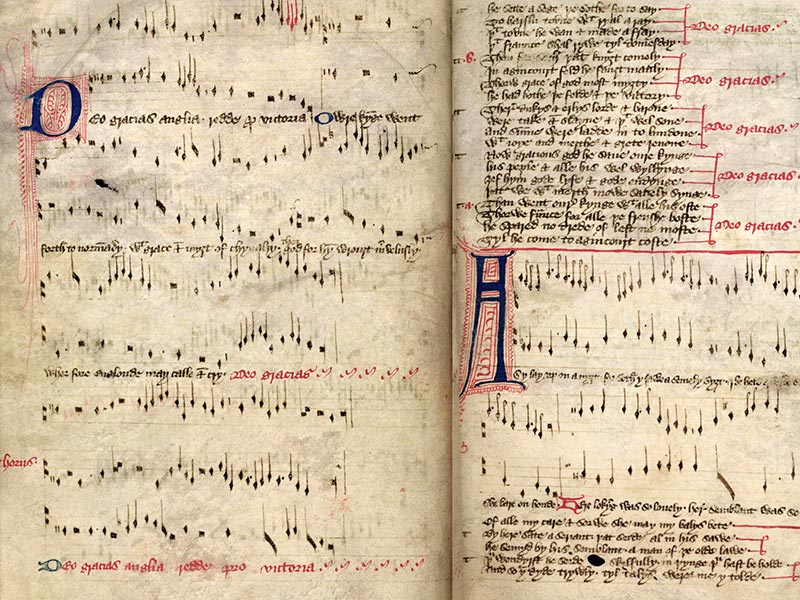 Numerous folk songs were written soon after the English victory, the most popular of which was the “Agincourt Carol” produced in the first half of the 15th century

The slaughter was fearsome. The French may have lost up to 10,000 men, at least six times the loss of the English, and many of them the flower of the nobility of France. Henry got some of what he desired, including Catherine, but his death a few years later put an end to English pretentions, and later generations would fight to regain lost land and glory.