“I returned and saw under the sun, that the race is not to the swift, nor the battle to the strong, neither yet bread to the wise, nor yet riches to men of understanding, nor yet favor to men of skill; but time and chance happeneth to them all.” —Ecclesiastes 9:11

f ever there was an international city in America, New Orleans was it. The city was founded by the French Mississippi Company in 1718, ceded to Spain as a result of the French and Indian War (7 Years War) in 1765, returned to French control in 1803 and was the same year included in the Louisiana Purchase, making it a United States territory. Immigrants from all those countries, plus Germans, Jews, Poles and Italians, not to mention thousands of both free and slave Africans called New Orleans home in 1815. The city was known for its aggressive pirate bands led by Jean LaFitte, and the predominant religions of the area were Roman Catholicism and Voodoo. Toward the end of the War of 1812, England decided it was their turn to own New Orleans and thus control all the trade on the Mississippi River, so they sent an army fresh from defeating Napoleon Bonaparte, to seize it from the Americans. That most polyglot mixture of local ruffians, American regulars, militias, blacks, slave and free, and pirates—led by the only man on the continent who could command such a mob, Andrew Jackson—determined to prevent his majesty’s forces from capturing the immensely profitable chaos that was New Orleans. 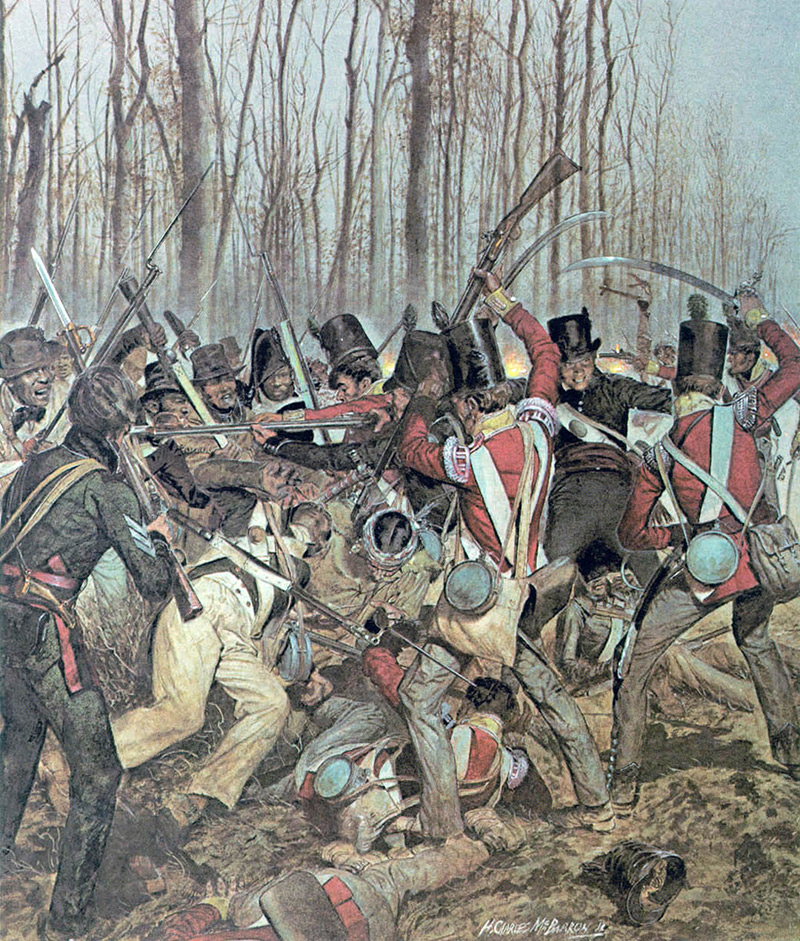 The Battle of New Orleans was the climax of the five-month Gulf Campaign (September 1814 to February 1815) by Britain to capture New Orleans. Above is a depiction of the night attack of December 23, 1814 where Choctaws and a mixed group of Major Daquin’s Battalion of Free Men of Colour face off against members of the British 85th and 95th Regiments.

Great Britain and the United States had gone to war against each other in 1812. Both sides won and lost battles on the sea and land, with the British given the edge with their capture and burning of the enemy capitol of Washington, DC on August 24, 1814. With the repulse of the English Navy at Baltimore and the defeat of a major expedition on Lake Champlain, the British agreed to sit down at Ghent in Belgium and discuss a cease-fire and end the war. The belligerents signed the Peace Treaty on December 24, 1814, awaiting only the approval of the United States Senate for it to legally and officially end the war. While the treaty was crossing the ocean for that purpose, the expedition to capture New Orleans came to shore among the bayous above New Orleans. 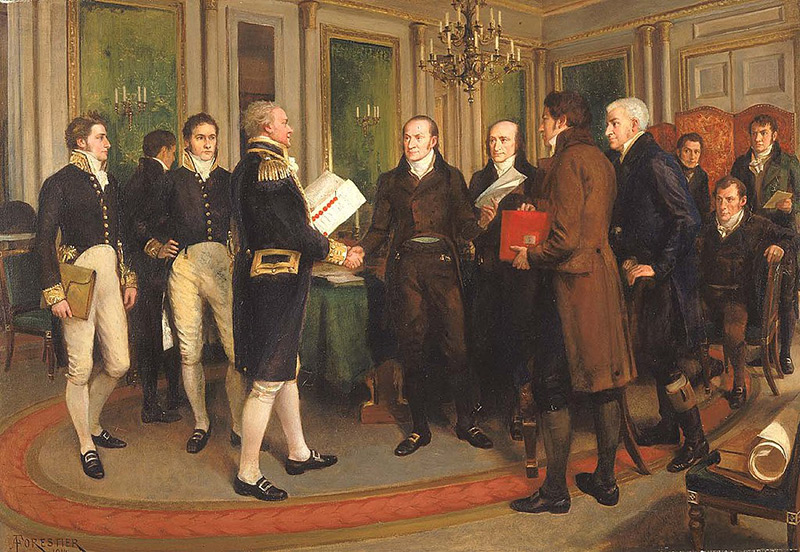 The Treaty of Ghent, December 24, 1814: The leading British delegate Lord Gambier is shaking hands with the American leader John Quincy Adams; the British Undersecretary of State for War and the Colonies, Henry Goulburn, is carrying a red folder

Knowing of the expedition, President Madison had ordered Tennessee General Andrew Jackson—the recent victor in settling the Creek Civil War, and subsequent acquisition of their tribal lands in the Treaty of Fort Jackson—to gather his forces and save New Orleans. Jackson, who had grown up on the frontier in the Carolinas and Tennessee and achieved great success as a lawyer, judge, and now General of the Tennessee Army and its allies, hustled over to the city at the mouth of the Mississippi River to prepare defenses along the bayous protecting the land approaches. 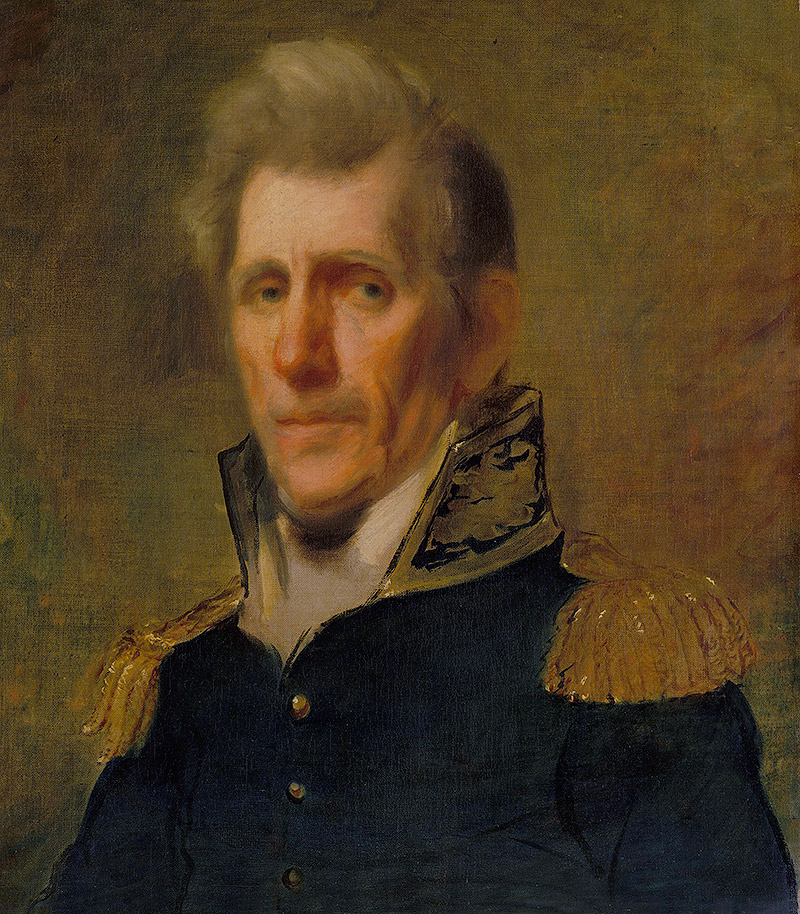 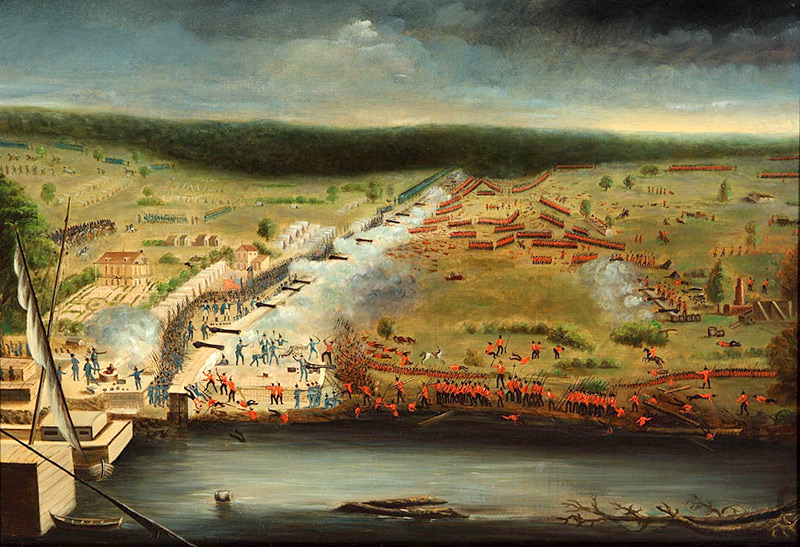 Battle of New Orleans by Jean Hyacinthe de Laclotte (1766-1829), a member of the Louisiana Militia who participated in the battle; painted by him after the victory based on his sketches made at the scene, and showing Chalmette Plantation on the far left, next to Rodriguez Canal which leads into the Mississippi River in the foreground

Jackson was eager to face General Edward Packenham’s veterans, for he was still harboring a secret desire for revenge for a wound he had received as a young man from a British officer during the War for American Independence. The British arrived on New Year’s Day, 1815, and began an artillery bombardment on the American earthwork and cotton bale fortifications which crossed Chalmette Plantation. In the ensuing exchange of artillery fire, the Americans “silenced” thirteen British guns, killing or wounding about one hundred soldiers to their own loss of about thirty-five. A group of Tennessee militia and Choctaw warriors repulsed an attempted flanking attack by British infantry. Several other indecisive skirmishes ensued in the following week. A frustrated and angry General Pakenham determined to finish off the amateur “squirrel hunters,” in an all-out, two-pronged assault on the American entrenchments on January 8. 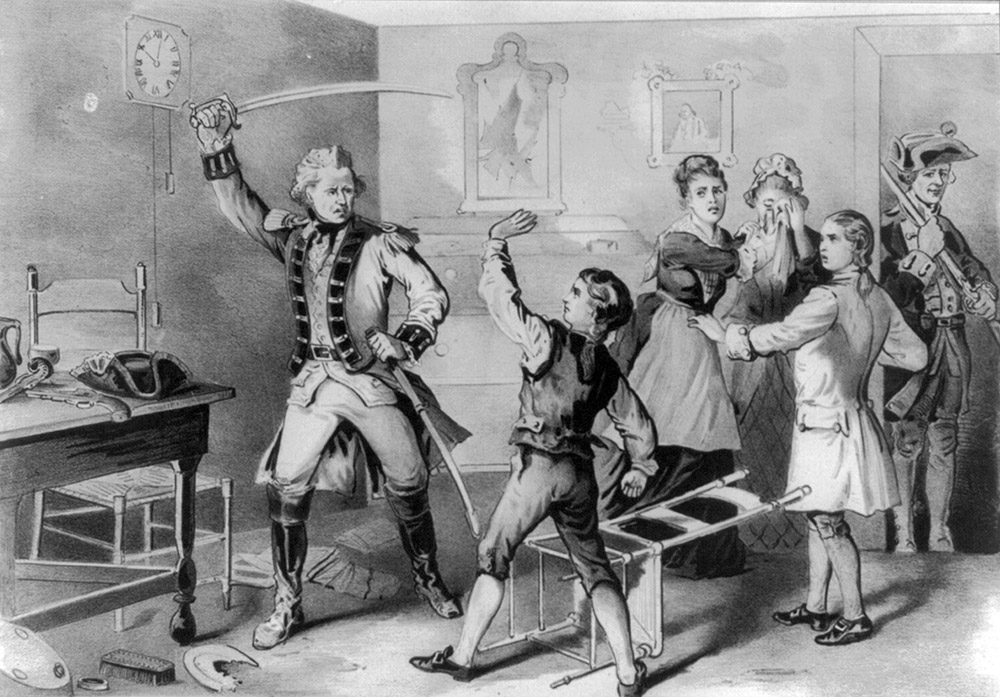 After refusing to clean the boots of one of his captors, young Andrew Jackson received a slash of a British officer’s sword, leaving the youth with scars on his left hand and head and an enduring hatred for the British. 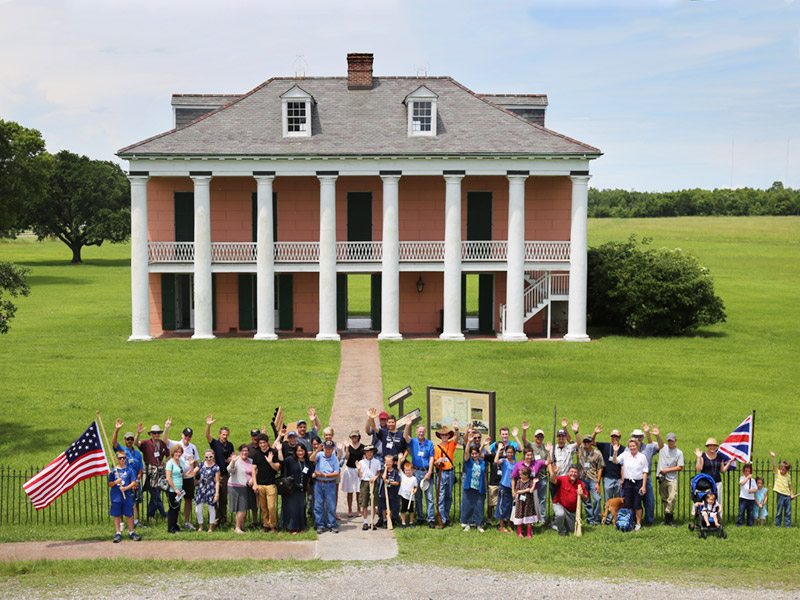 A left-flank British task force, on the other side of the river, was given the goal of capturing the American artillery position, then turning the guns on Jackson’s troops directly across, in support of the main British attack. The assault started eight hours late, due to the muddy terrain, and though ultimately successful, was too late to assist the main effort against the American fortifications. The British infantry stepped off on time against the main body of American defenders, in dark and foggy conditions. Difficulties immediately impeded the Red Coats’ efforts. 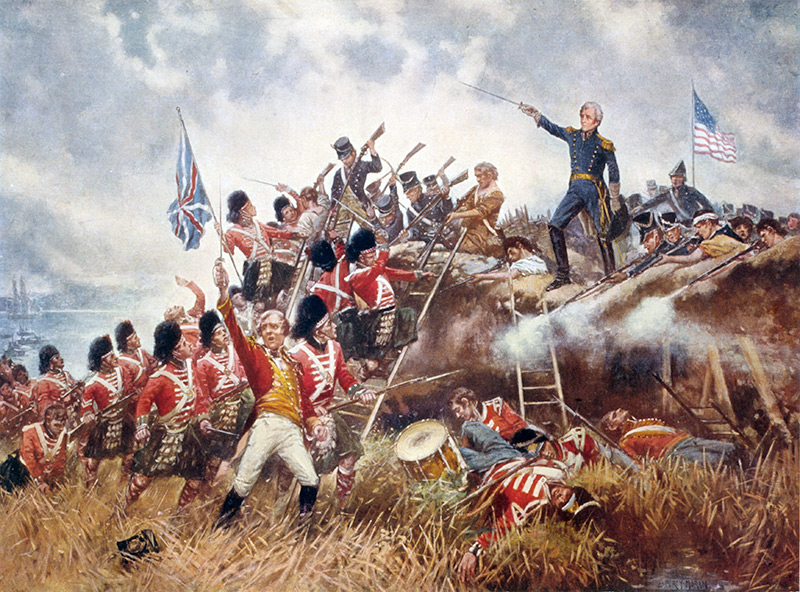 The 44th Foot Regiment neglected to bring the ladders and fascines with which to cross the eight-foot-deep, fifteen-foot-wide moat in front of Jackson’s army. They were instantly exposed to a withering fire from artillery and rifles, with no means “to close with the bayonet.” The 93rd Highlanders (later in history known as the “Sutherlands”), captured a small segment of the American right flank, but were pinned in place and shot to pieces as Jackson rushed reinforcements into that sector. As the 21st Regiment of Foot assaulted the center of Jackson’s line, General Pakenham and his second-in-command General Gibbs, were both killed by artillery rounds. Desperate fighting destroyed the piecemeal attack, and the British troops were withdrawn altogether on January 28. For all practical purposes, the Battle of New Orleans was over, with the British army suffering more than 2,000 casualties to the Americans’ 71! New Orleans remained in American hands, not to be attacked again until 1862 when Yankee invaders recaptured the city from the Confederacy. 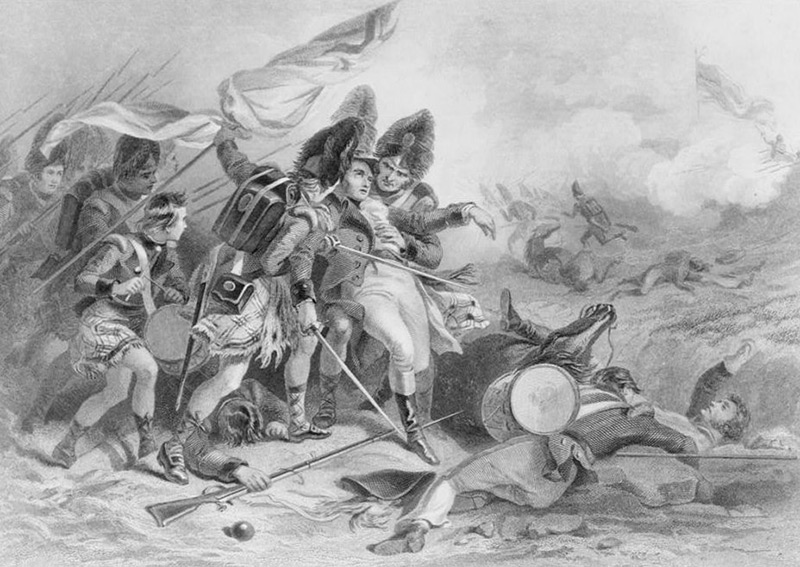 The Battle of New Orleans vaulted Andrew Jackson into national attention in the eastern newspapers, and this greatest American victory in the War of 1812 was ranked with the triumph at Yorktown, thirty-four years earlier. It would prove to be the last serious attack on the United States by a European power, and lead to the domination of American politics by Andrew Jackson for an era.