“Now I, Nebuchadnezzar, praise, exalt and honor the King of heaven, for all His works are true and His ways just, and He is able to humble those who walk in pride.” —Daniel 4:37

lavius Theodosius was born in northwestern Spain to a high-ranking Roman Officer. As a young man he traveled with the army of his father on campaign in Britain and elsewhere, where he witnessed the slaughter of the battlefield and learned the strategies and tactics that brought victory. In 373 he was appointed governor of the Roman Province of Upper Moesia, which he defended successfully from the various Germanic invaders. Blond, elegant, articulate, and skilled in both governing and fighting, Theodosius nonetheless kept a low profile amidst the chaos of misrule and anarchy among the emperors and claimants to the Roman Empire. After the death of both co-rulers of the Empire, the sons of one of them invited Theodosius to take command of the Illyrian Army, effectively making him co-Augustus of the Eastern jurisdiction of the Empire. Theodosius became Emperor in the East in 383 and West in 394. He would be the last Roman Emperor to rule both halves together (with assistance from his sons), though only for four months. 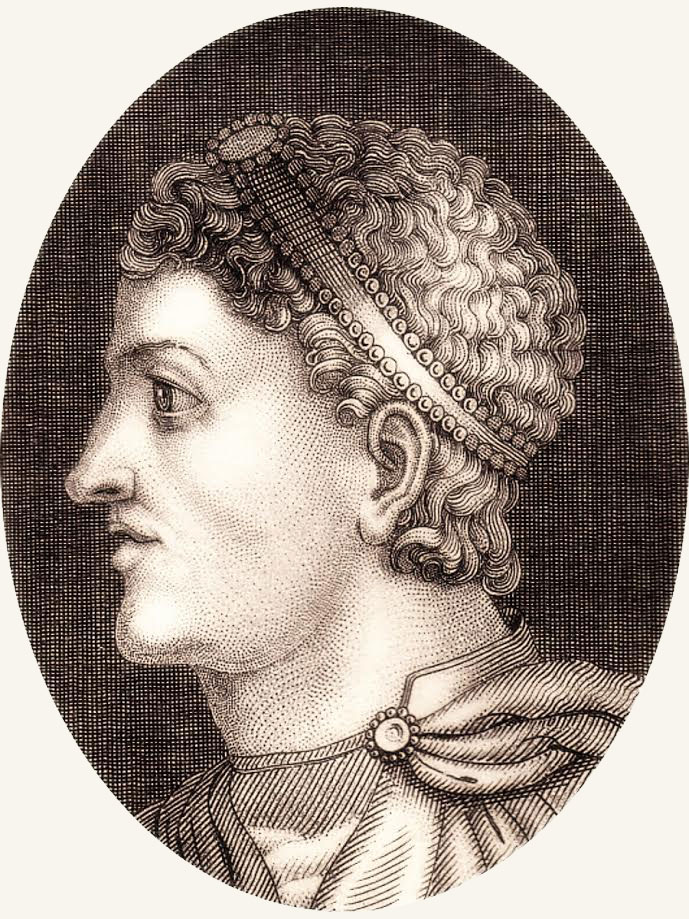 Flavius Theodosius Augustus (347-395 A.D.), last emperor to rule over both the Eastern and the Western halves of the Roman Empire

The cohesion of the Roman Empire had proven precarious for many years and did not possess enough loyal Romans in the Army to hold it together. Theodosius, as the emperors before him, had to rely upon barbarian soldiers to fill the legions. Those non-Romans were often unreliable and rebellious, but were pitted against other Germanic tribes to keep the peace. Large sums were required to buy the fidelity, if not the patriotism, of the non-Romans who fought under the Roman banners. They were given land and provisions also. Theodosius levied heavy taxes in order to pay for such mercenary defenders of the Empire. 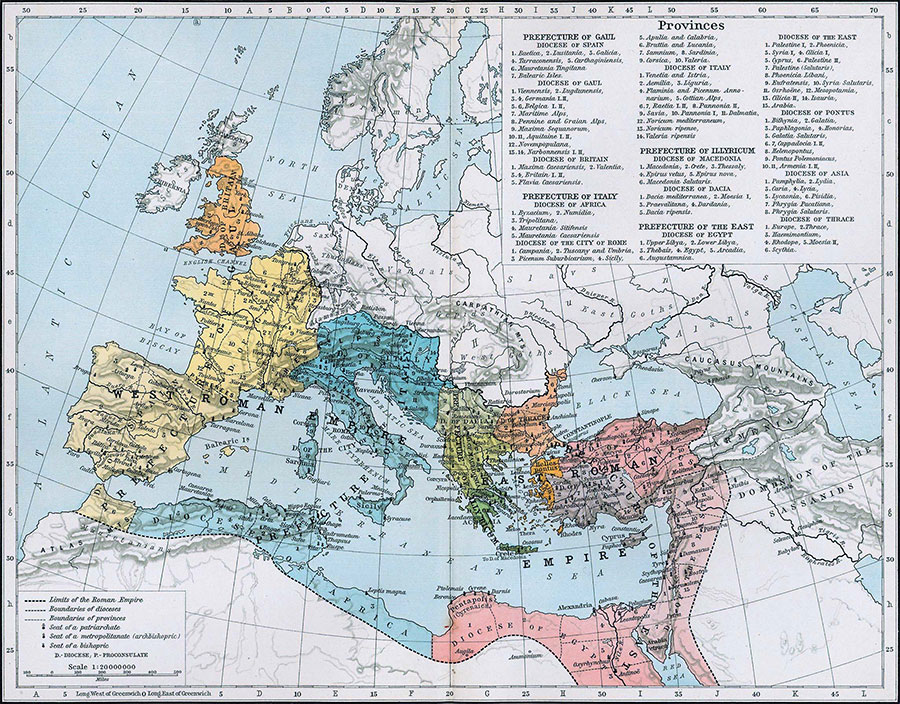 Early in his reign, Theodosius contracted an illness that almost carried him off. He subsequently underwent Christian baptism and declared himself a Christian of the Nicene Creed. Not since Constantine had the Empire seen a serious Christian emperor. Not only tax cheats fell under his sometimes deadly gaze, but also heretics and pagans. This little-known Christian emperor would change the church in two ways. First, He called a Church Council at Constantinople and put an official end to the heresy of Arianism, codifying the Nicene Creed as we know it today, thus officially enforcing orthodox Christianity on the Empire. Secondly, he placed his power under that of the Church, which set a standard (with periodic challenge), lasting more than a thousand years. He closed pagan temples and forbade pagan worship. The dominant heresies of the day were driven underground throughout the Roman Empire. 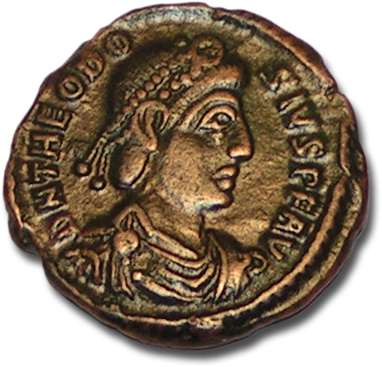 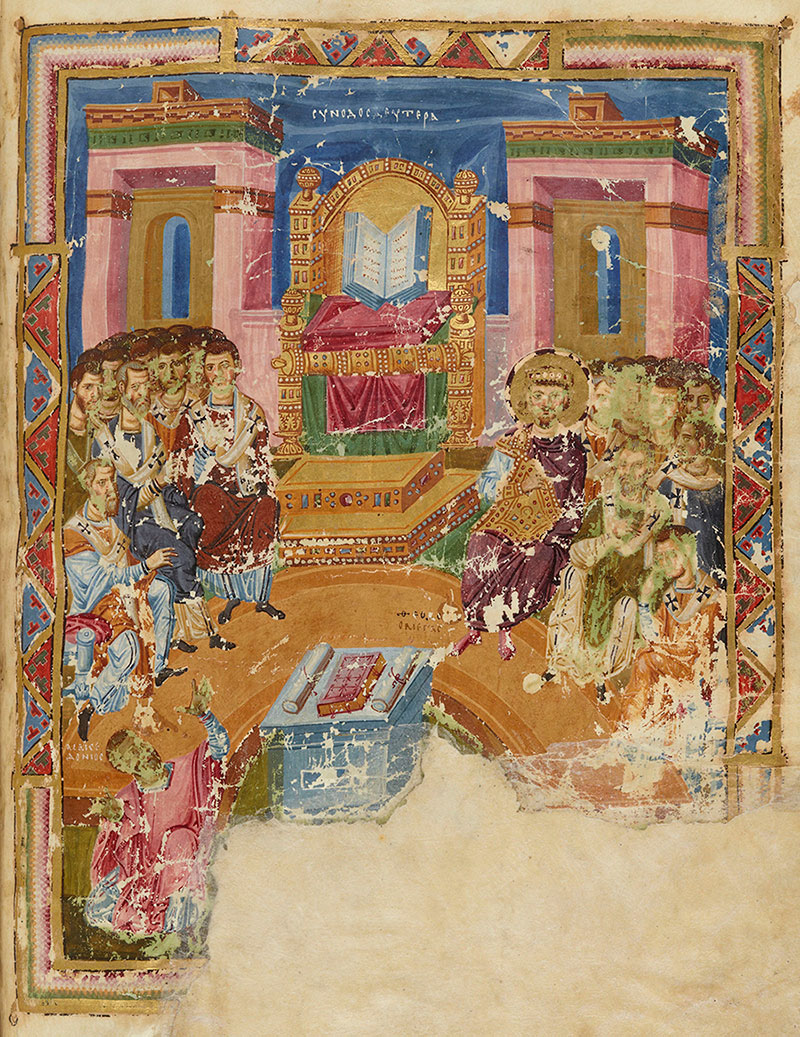 In this 9th century Byzantine manuscript illumination, Emperor Theodosius and a crowd of bishops sit on a semicircular bench on either side of an enthroned Gospel Book at the First Council of Constantinople (381 A.D.)

Politically, Theodosius was able to forge an alliance with the Visigoth invaders and defeated the Ostrogoths in battle. In 390, the population of the city of Thessalonica rioted, some said over a controversial gladiator, others claimed in anger over a barbarian garrison in the city. Whatever the issue, the raging anger that was a weakness of the Emperor, displayed itself in his ordering a massacre of citizens of the city trapped in the coliseum. The Goths killed seven thousand people without regard to sex, age, or innocence.

“Ambrose, the Bishop of Milan who was a spiritual and political adviser to Theodosius, was furious. He refused to give Theodosius Communion until the emperor performed public penance: he must put aside his royal garments, don a shroud, and publicly plead for God’s mercy. When Theodosius consented, it marked a new chapter in the history of church and state. For the first time, a secular ruler submitted to the church. Less than a century earlier, emperors were trying to wipe out the church.” (Christian History Magazine) 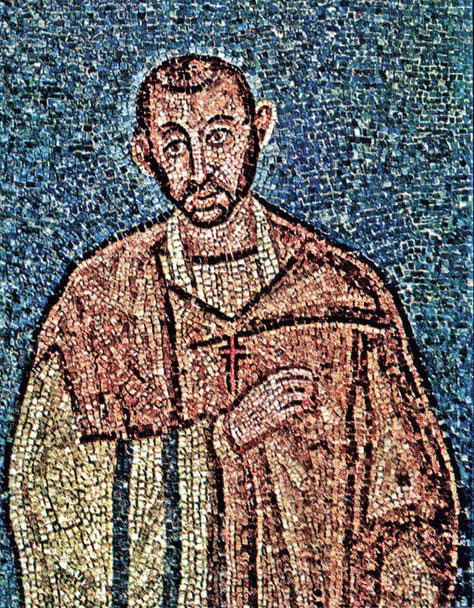 Ambrose is supposed to have said, “The Emperor is in the Church, not above it.” 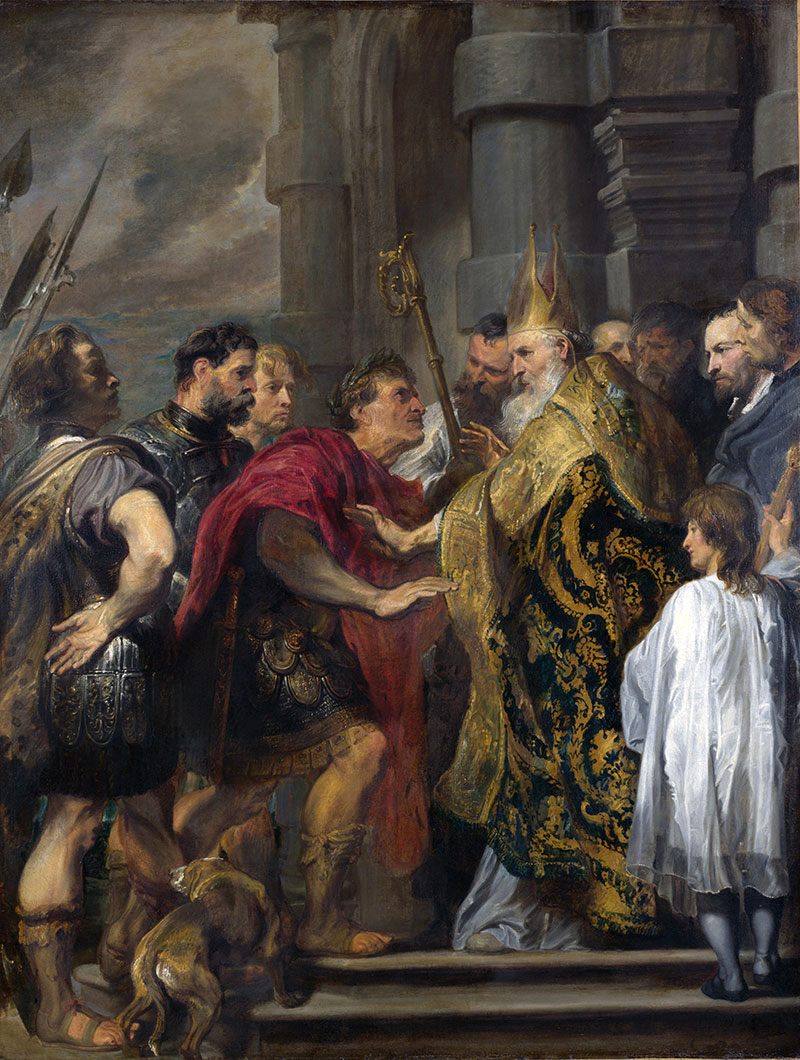 Emperor Theodosius, clad in armor and a laurel wreath, is barred by Bishop Ambrose (c. 340-397 A.D.), from entering Milan Cathedral following the massacre in Thessalonica

When Theodosius died in 395, the army, mostly Goths, Scythians, and other non-Romans, fell apart, as did the Empire itself. He had given the Church, especially in the East, a few years of thriving without persecution. With the disintegration of the Empire itself, the era of the “Middle Ages” began, but with a stronger Church thanks to the General turned Emperor, a man of gigantic flaws but desiring Christ’s Glory to triumph in the Church.