Duke of Marlborough Wins at Malplaquet, 1709

ir Winston Churchill, MP (1620-1688) fathered eleven legitimate children, fought for Charles I in the English Civil War, paid a huge fine for serving on the losing side, and died the year his beloved patron James II lost the throne of England to William and Mary. He served as a Colonel, fighting against Oliver Cromwell, who never lost a battle in which he commanded. John (1650-1722), the eldest son of Sir Winston, served as the highest ranking General of Great Britain in a war that changed the face and destiny of Europe, ironically becoming the second of the two English generals in history who never lost a battle. As the most illustrious ancestor of the 20th Century Winston Churchill, his accomplishments, if not his full title, distinguished him above all his peers: John Churchill, 1st duke of Marlborough, marquess of Blandford, earl of Marlborough, Baron Churchill of Sandridge, Lord Churchill of Eyemouth, Reichsfurst (Imperial prince). 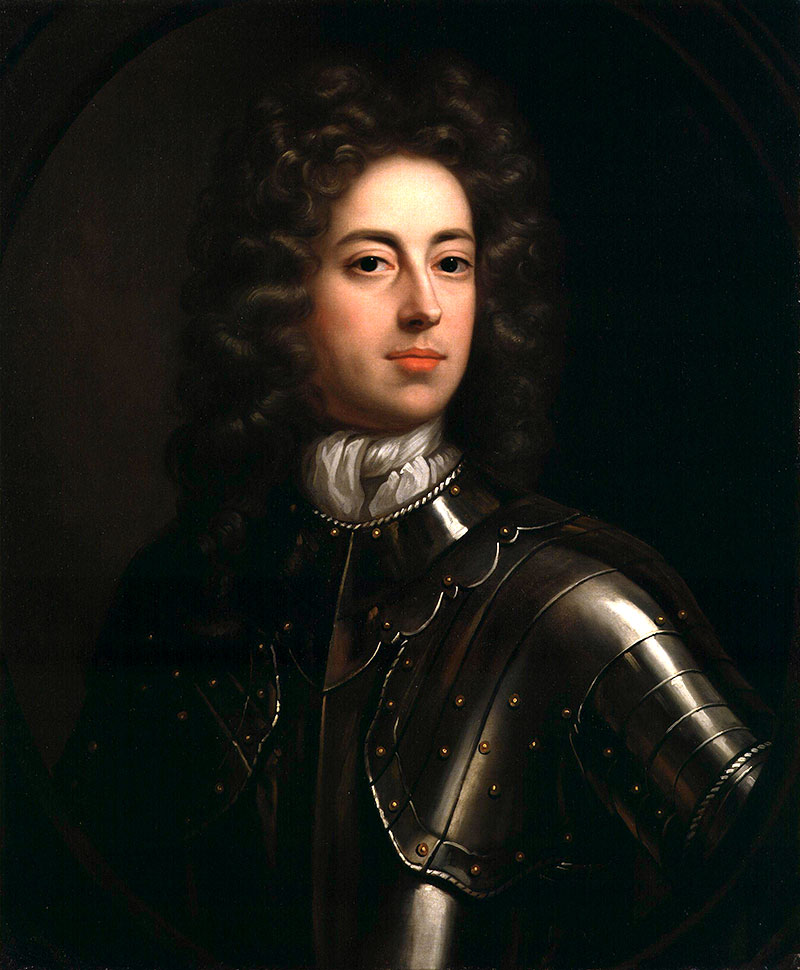 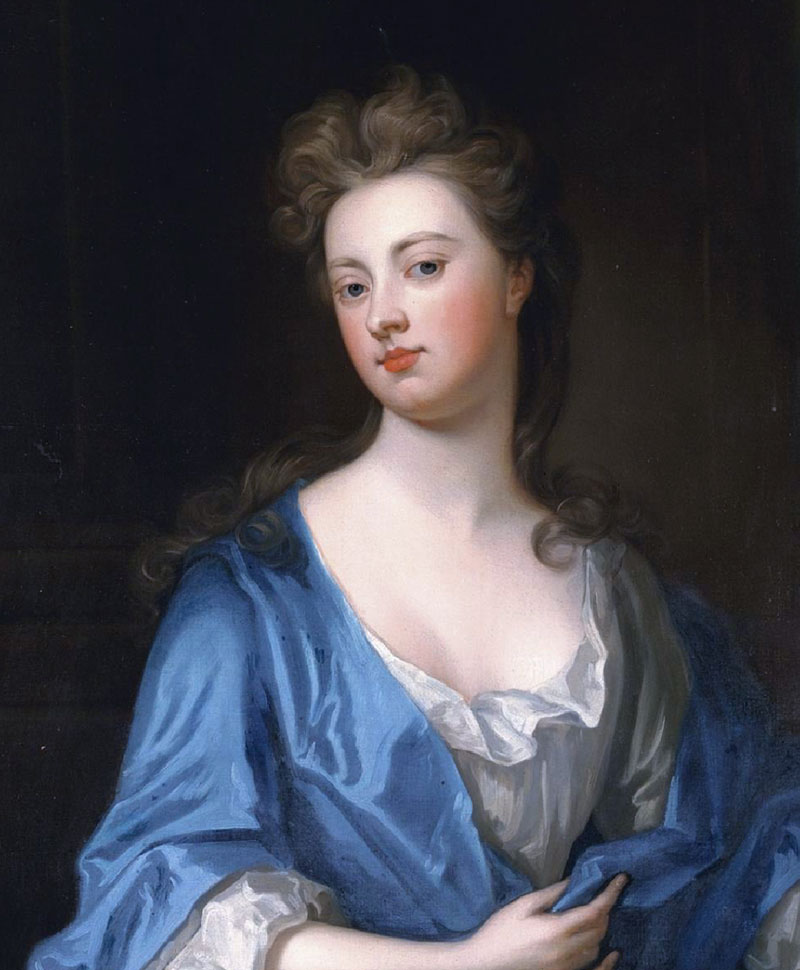 John Churchill, duke of Marlborough had “married for love” a woman without enormous wealth, and thus against his father’s wishes. He was forced to maintain his fortune and livelihood through effort, a man with the character and perseverance to do just that. He found time to father seven children with Sarah Churchill, the (now) Duchess of Marlborough. His descendant Winston Churchill was forced to make his own way in the world also, although for different reasons; his parents were spendthrifts who wasted their fortune on entertainments, (but he also married for love). 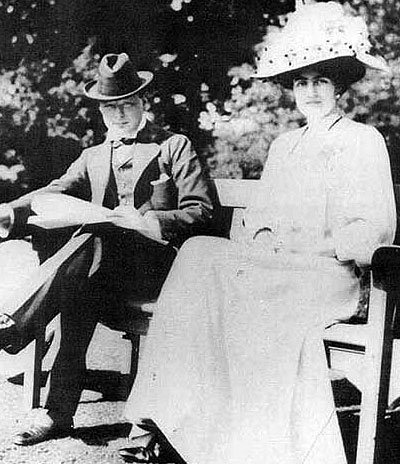 Winston and Clementine Churchill, shortly before their marriage in 1908 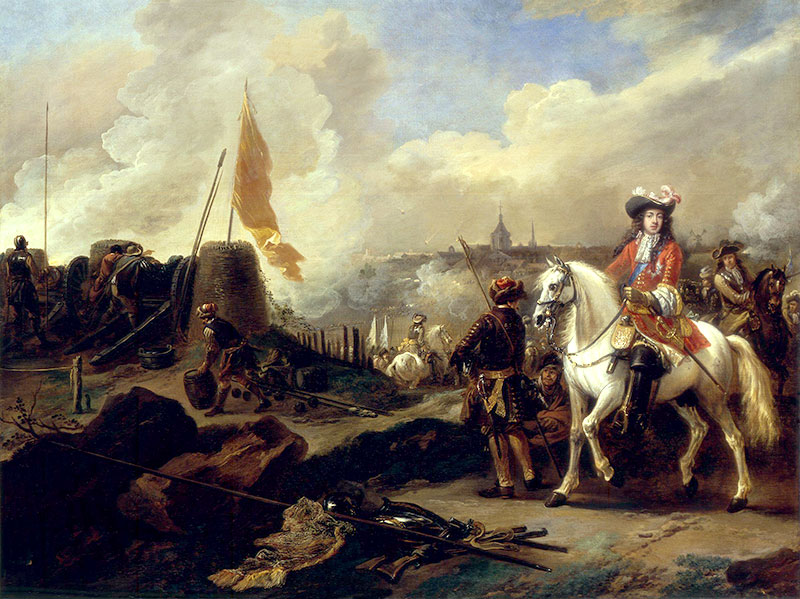 John Churchill began his military service with a commission in the foot guards in 1667. In the third Dutch War (1672-74) he earned a promotion to Captain, and then served with distinction under the Duke of Monmouth, steering clear of association when the duke attempted a clandestine and tragically failed overthrow of his step-brother James II. That monarch made Churchill a lieutenant general and a peer of the realm. When James was expelled from the English throne for his Roman Catholicism, Churchill deftly landed in the camp of the new Protestant monarch, King William of Orange, who awarded Sir John the earldom of Marlborough and membership in the Privy Council. He served in effective command in both Ireland and Flanders. Falsely implicated in plots to restore James II to the throne, Churchill spent time in the Tower of London in 1691. Although eventually released, he experienced three more years out of favor for leading a “substantial faction” opposed to William’s favoring his Dutch associates over English. 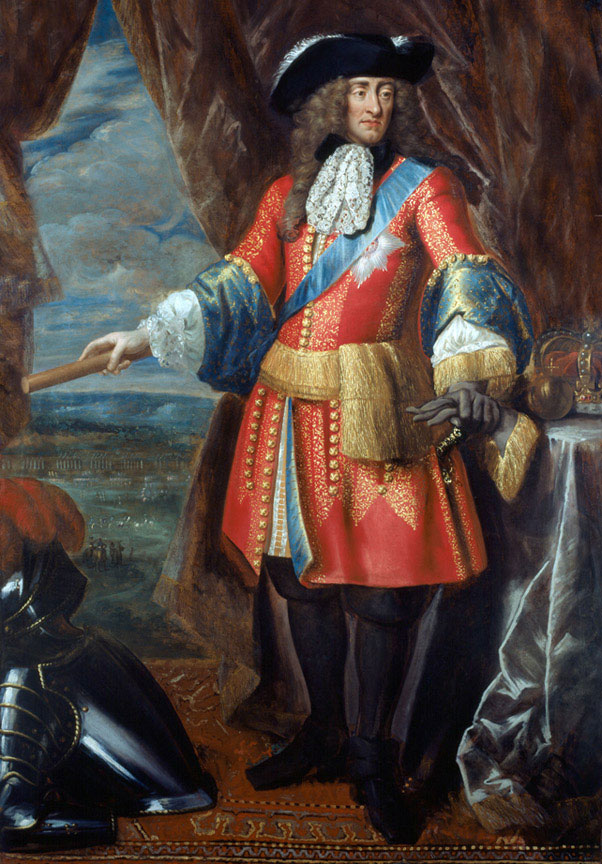 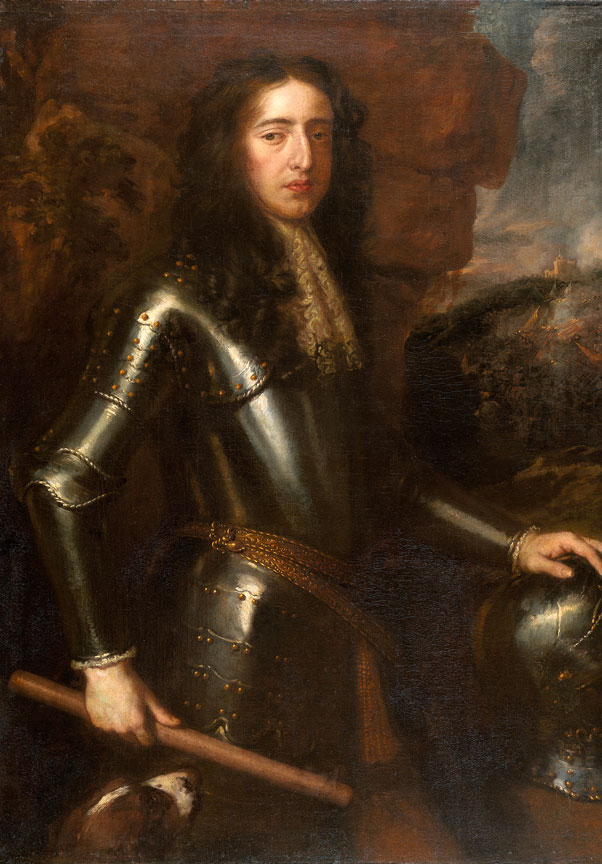 Louis XIV of France—the longest serving monarch in European history (reigning more than seventy-two years, beginning in 1643)—had advanced French interests through war and diplomacy, allied with England for five years then against England for the next hundred and forty. Upon the death of William III (the new English monarch), Queen Anne (the last of the Stuart line), confirmed Marlborough’s appointment as supreme commander of English and Dutch troops on the continent, initiated by William in the year of his own death, to oppose Louis’s ambitions of conquest. Marlborough crossed to Holland and undertook the first of ten successful campaigns against France. The English commander proved a genius at deception and maneuver, and master of both strategy and tactics. He also put his considerable diplomatic skills to use as he created and maintained “The Grand Alliance” of the War of Spanish Succession (1701-1714). Descendant Winston paid close attention to his illustrious ancestor. 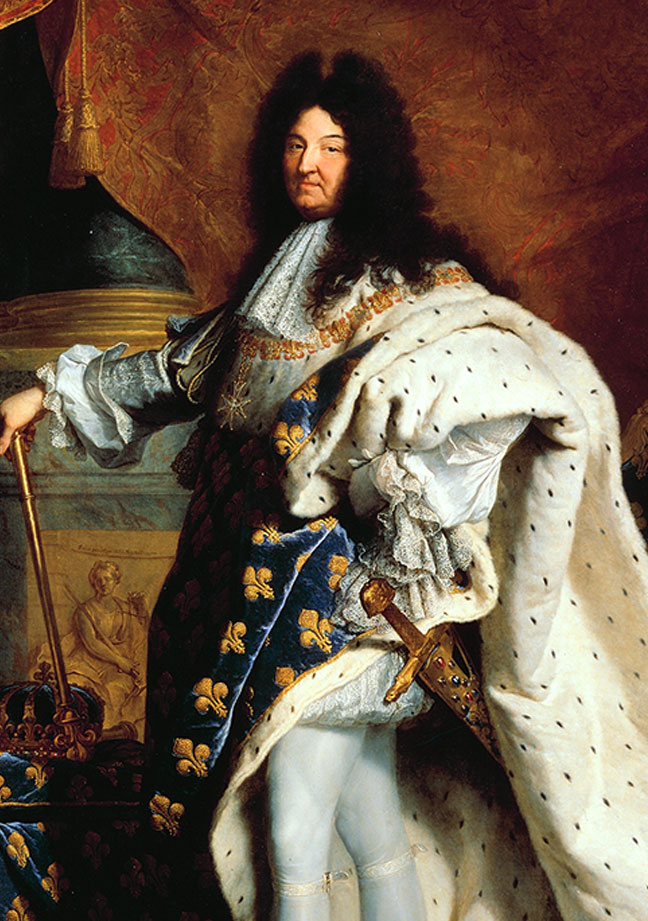 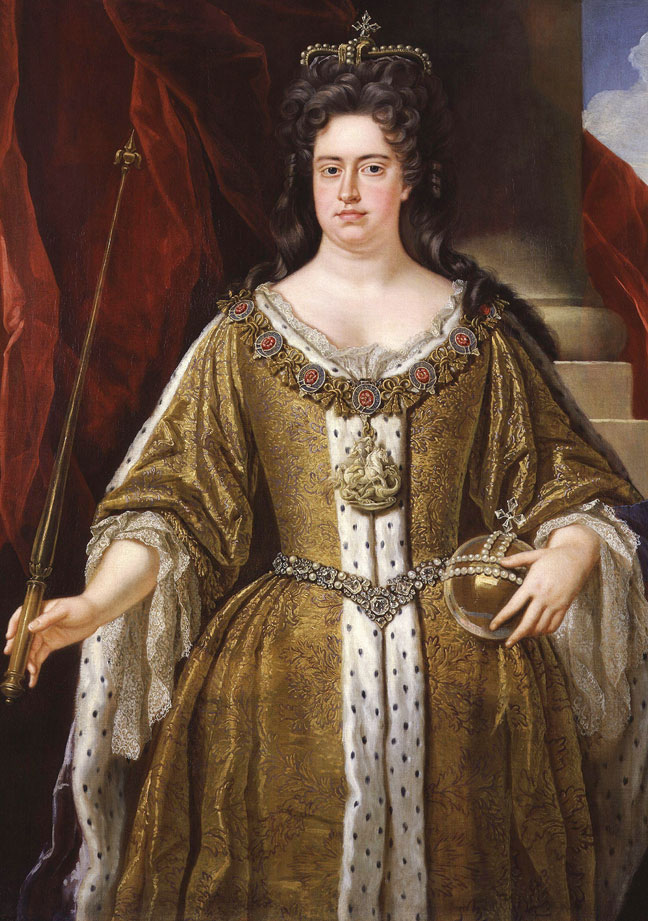 That war, known by some military historians as “the first world war of modern times,” lasted thirteen years and resulted in battles in Spain, Hungary, France, the Netherlands, Italy, America, Austria, and on the high seas, as well as trade wars in India and South America. The war concerned who would succeed to the throne of Spain; France wanted an heir to the Bourbons, and Austria to the Hapsburgs. Combined with the most complex political maneuverings by all the countries in Europe, the Grand Alliance was again assembled against France. England’s goal was to maintain the balance of power in Europe and protect her trade routes around the world. 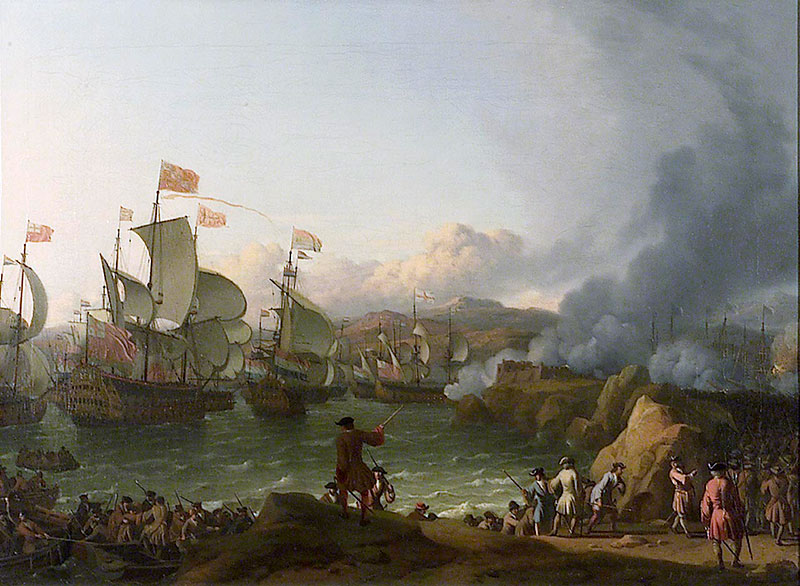 An Anglo-Dutch squadron captures a Spanish treasure fleet in 1702,
during the War of Spanish Succession

Defending the Dutch Republic was key to the strategy. In his first campaign, Marlborough captured Kaiserswerth in 1702 and cleared the territory between the Rhine and Meuse Rivers, for which triumphs he was created Duke of Marlborough. In order to assist Austria—whose armies were engaged in Italy and along the Rhine—Marlborough attacked along the Moselle River and feinted toward Alsace to draw off Bavarian forces that had been committed to the French. In August of 1704, the Anglo-Dutch army fought the great battle of Blenheim, in which he lost 12,000 men but inflicted more than 36,000 casualties on the French. After a full year of one success after another, the other coalition countries sat back on their laurels, against the offensive strategies planned by Marlborough. 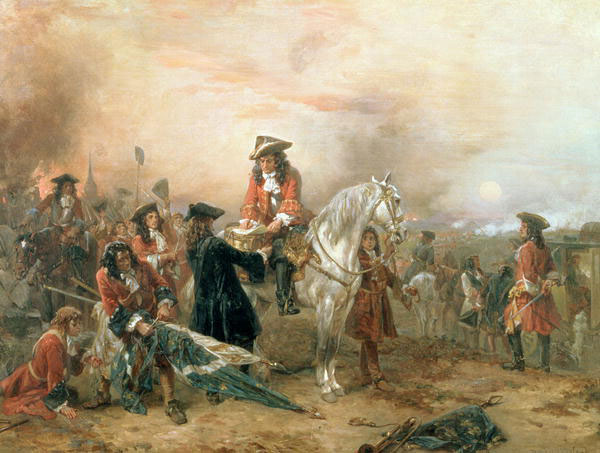 The Duke of Marlborough writing the Blenheim despatch to his wife, Sarah, after the Battle of Blenheim

The French attacked on all fronts to win back territory and probably sue for peace. At Ramillies, Marlborough very nearly lost his life but in the end, inflicted an enormous defeat of the French, who lost five times the number of troops. As the years passed and the war engulfed more men, and expanded around the world’s oceans, Marlborough’s political enemies increased their numbers in Parliament and called for negotiated settlement along Whig lines, rather than the Tories, who had brought the war on and demanded ultimate victory on the battlefield. Peace talks collapsed in 1708 as the Allies invaded France, looking for that killer blow that would end the war. 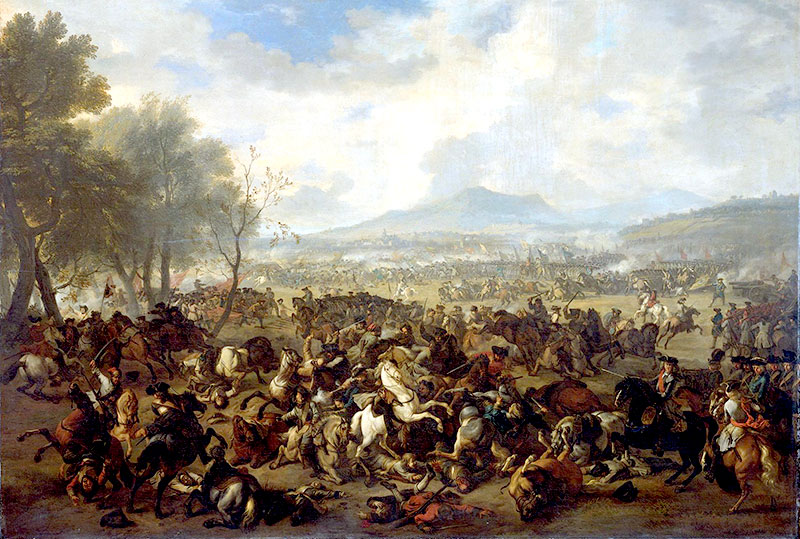 The Battle of Ramillies between the French and the English, 1706

On September 11, 1709 one of the bloodiest battles of the century was fought at Malplaquet, another Marlborough victory, but at too steep a cost. The French commander, the Duke of Villars, under desperate orders from King Louis and motivated by the potential loss of Mons and a final capitulation of the war, fought an inspired battle from good defensive positions. Although the Allies lost more than 20,000 and the French, 11,000, Marlborough prevailed. The battle featured Swiss mercenaries on both sides and the Irish Brigade took large casualties on behalf of France. Nonetheless, the French left the field, their honor restored, and significant negotiating power in hand. 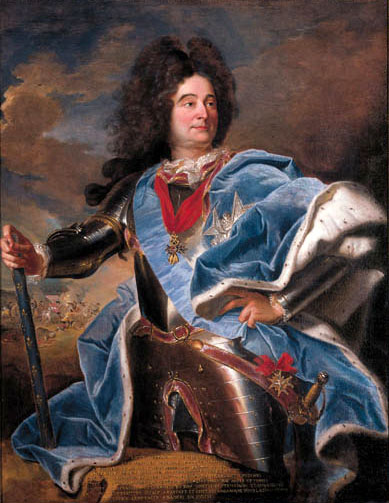 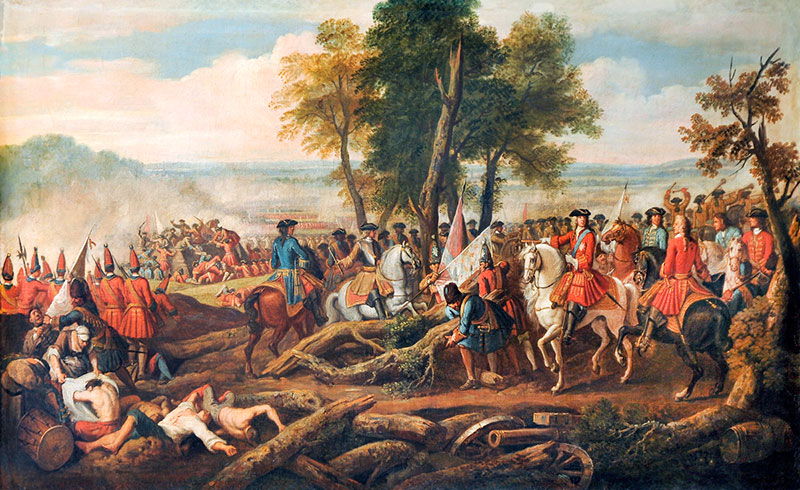 The Duke of Marlborough and Prince Eugene entering the French entrenchments at the Battle of Malplaquet, 1709

Although the war dragged on for five more years, featuring more Marlborough triumphs before ending with the Treaty of Utrecht, the government had lost all interest in keeping Marlborough in charge. Whig allies were all defeated at home and the Tories in power, and the Queen turned against him, the Great General was replaced and retired to the continent. He died in 1722 after suffering four strokes in three years. Once again, he had kept his feet in two political camps as needed—when Queen Anne died, he joined the Hanover succession, but kept a keen eye on the Jacobite (Stuart) cause while it lasted. Following the shifting political winds did not die with John Churchill. When Winston Churchill, Prime Minister, said that he was an ancestor, not a descendant, he was not including the duke, perhaps because he thought he himself was a reincarnation of Marlborough. 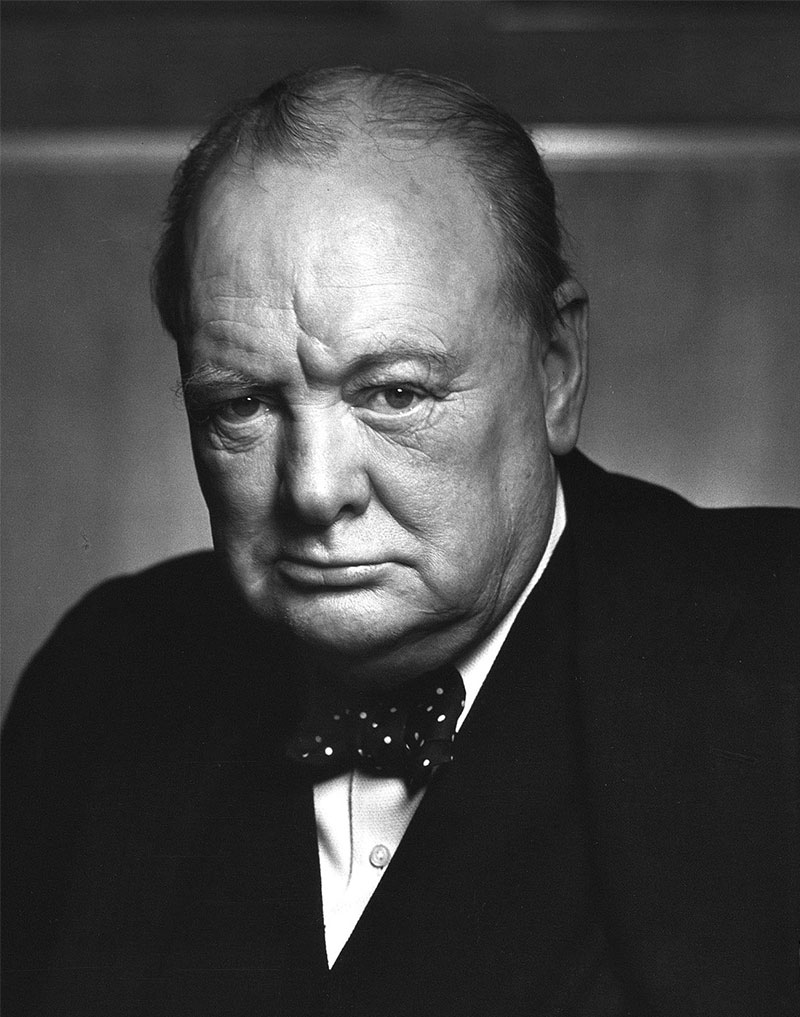 Sir Winston Leonard Spencer Churchill (1874-1965) was a direct descendant of John Churchill, Duke of Marlborough, and a renowned British statesman, soldier and writer who served as Prime Minister of the United Kingdom from 1940 to 1945, during the Second World War, and again from 1951 to 1955, as well as serving as MP for many decades