“Who can find a virtuous woman? For her price is far above rubies. The heart of her husband doth safely trust in her, so that he shall have no need of spoil. She will do him good and not evil, all the days of her life.” —Proverbs 31:10-12

nly one President of the United States never married. The wives of all the others were, and are, known as “The First Lady,” during her husband’s Presidency. Several wives died before their husband’s term in office, for example, Rachel Jackson and Martha Jefferson. Some proved very influential over opinion and policy decisions of the President, especially Edith Wilson (Woodrow’s second wife), Eleanor Roosevelt, and Hillary Clinton, who later ran for President herself. Just as presidents are noted for “firsts,” First Ladies enter such statistical lists, often self-conscious of their unique status. Frances Folsom was the first First Lady married in the White House, the first to have a child in the White House, and the first to remarry after the death of her husband, in this case Grover Cleveland. She bore five children, the last one living till 1995, age 92. 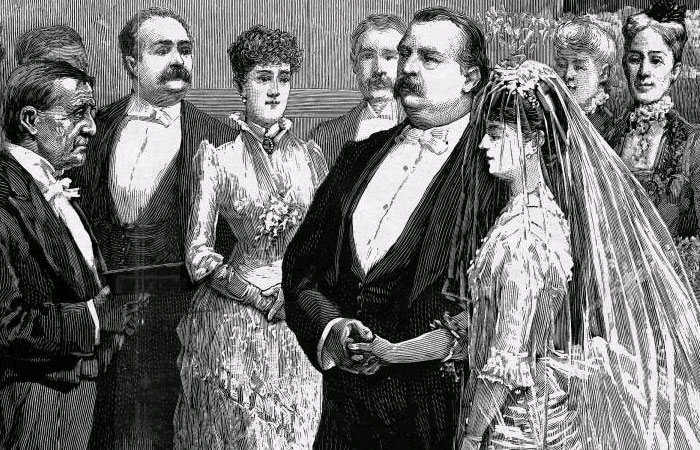 The wedding of President Grover Cleveland and Frances Folsom, June 2, 1886

Grover Cleveland entered the White House in 1884 at the age of 47, and a bachelor. The election campaign proved as nasty as could be, with the opposing Republicans, having been in power for the past twenty-eight years, hurling unprecedented invective, painting him as a rigid, unsociable rogue, and regaling the reading public with lurid stories, to counteract the real-life reputation of the President-elect as an honest, super-hard-working, rugged individualist. President Cleveland’s most capable sister Rose handled the White House receptions with energy and propriety, as the daughter of a Presbyterian minister might be expected to. To the slight discomfort of her brother, she frowned on serving wine (as a member of the Women’s Christian Temperance Union), and reportedly “relieved the monotony of an hour of hand-shaking by conjugating Greek verbs behind her formal smile.” As the public came to know the ex-governor of New York and now President of the United States, Grover seemed both warmly human and personable; but nothing dispelled their prejudices like his marriage in the White House on June 2, 1886. 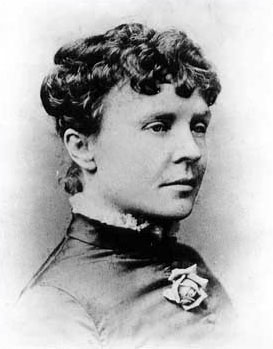 Rose Cleveland (1846-1918), sister of President Cleveland, who served as his White House hostess until his marriage to Frances in 1886 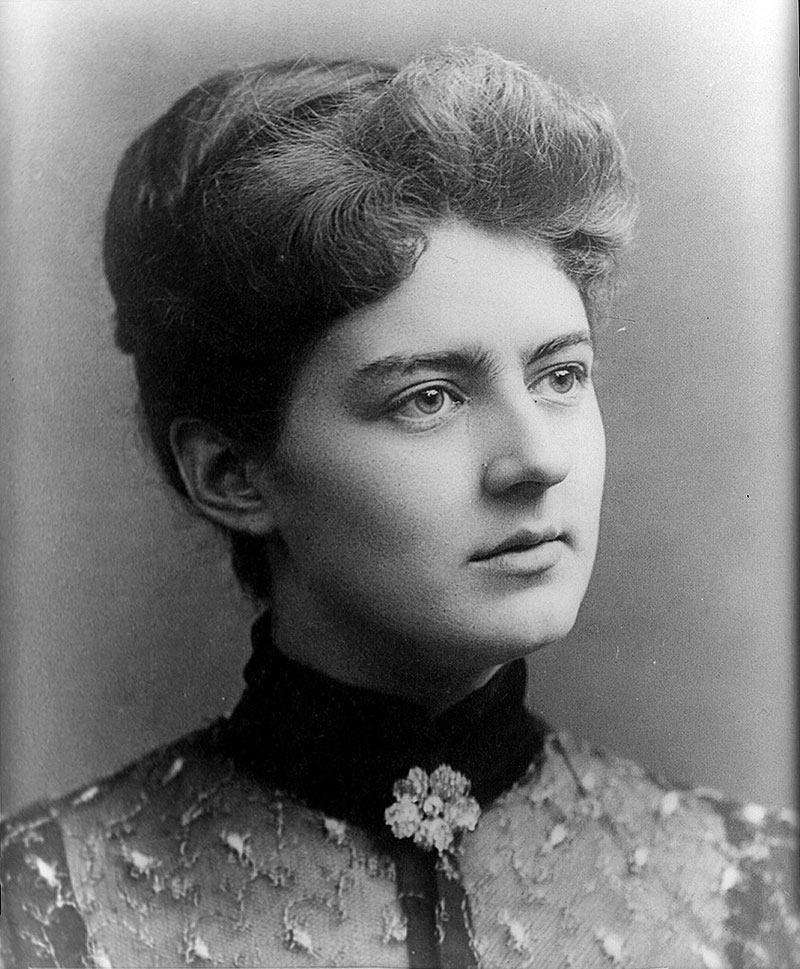 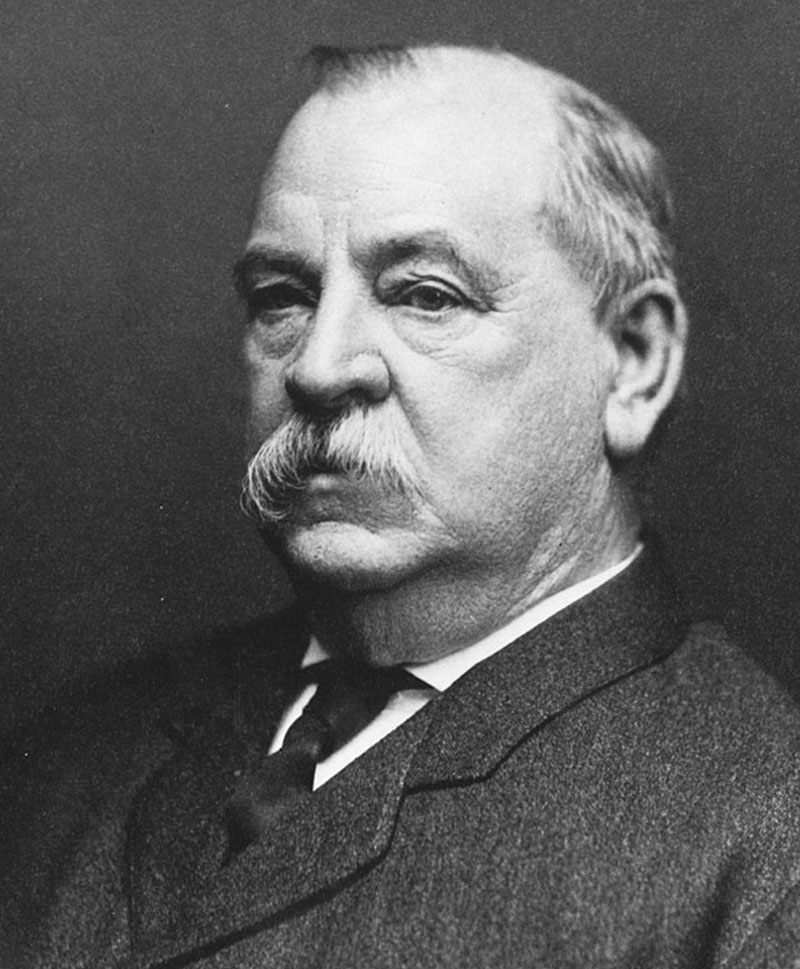 Grover had known Frances Folsom since she was born, the daughter of his oldest friend and law partner in Buffalo, New York, who had died at the age of thirty-seven. Though not her legal guardian, Grover bought her first baby carriage, and gave her advice and counsel from time to time through the years. At the age of twenty-one, the tall, graceful, intelligent and beautiful Frances exuded a warm personality, and a grace often remarked upon. Cleveland asked her mother if she objected to his writing her daughter, now a student in college. What was acquaintance and affection became romance, carefully guarded. The wedding was held in the White House, modestly decorated, and with only twenty-eight in attendance. During an informal reception following, a message of congratulations arrived from Queen Victoria. 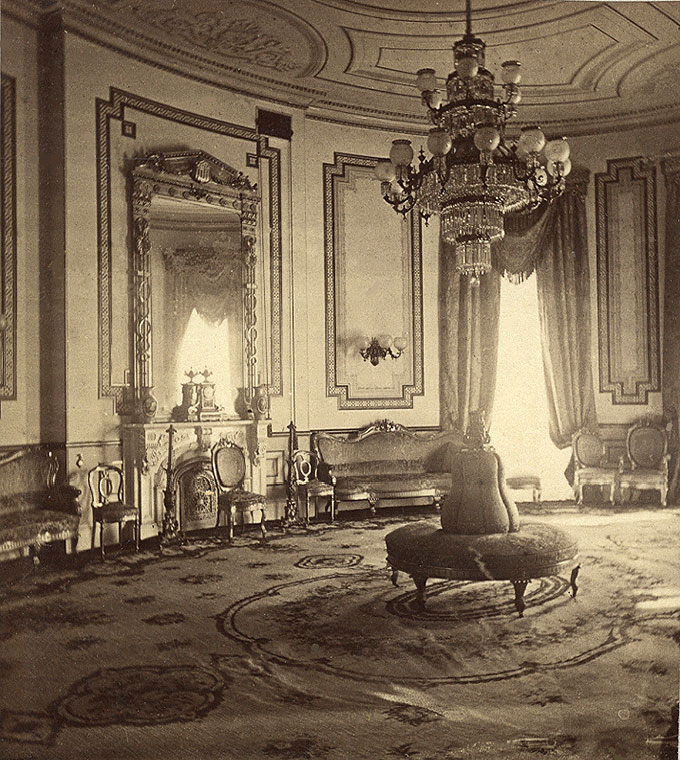 The “Blue Room” of the White House, where Grover and Frances were married 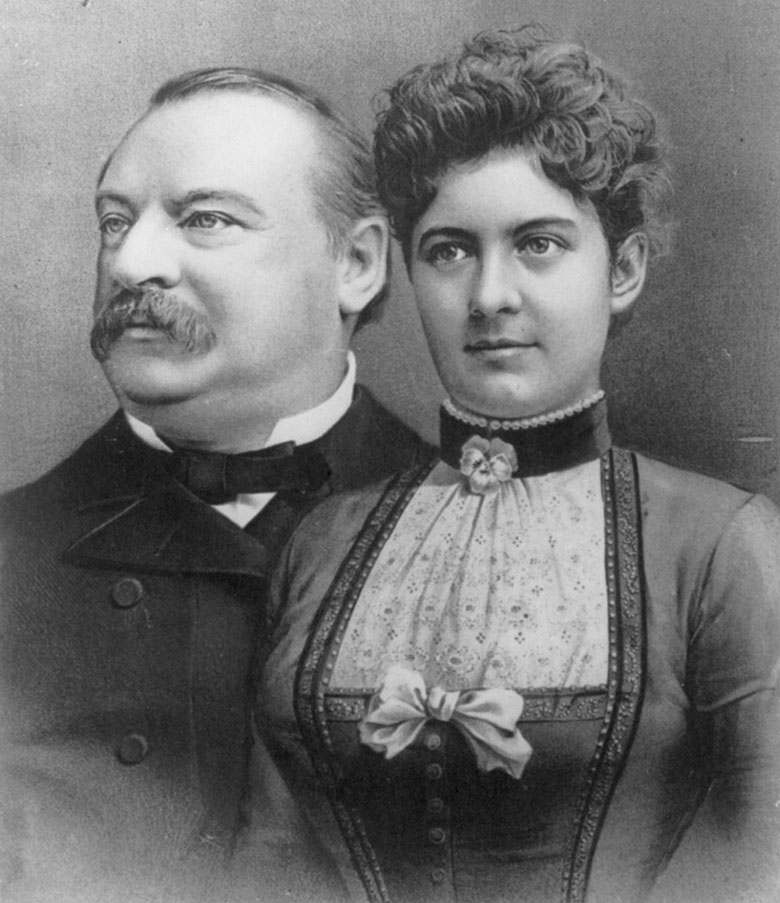 President and Mrs. Grover Cleveland who were ages 49 and 21, respectively, at the time of their marriage

The newspaper paparazzi made the Cleveland honeymoon miserable and he never forgot nor forgave the “correspondents” that harassed and pursued them wherever they went. The impertinence of the press infuriated the President as they continued to follow his wife wherever she went and wrote scurrilous fake news constantly. Everyone noticed, however, the change in the President after his marriage, for Frances was “eager, full of spirits, fond of social life and ready in her girlish way to see everything.“ He seemed rejuvenated as a result. She proved to be the most charming woman in the White House since Dolly Madison more than sixty years earlier. Mrs. Cleveland had an unselfish and genuine interest in people and she so transformed the Presidential social milieu that for the first time in history the President’s wife became known as “the First Lady.” 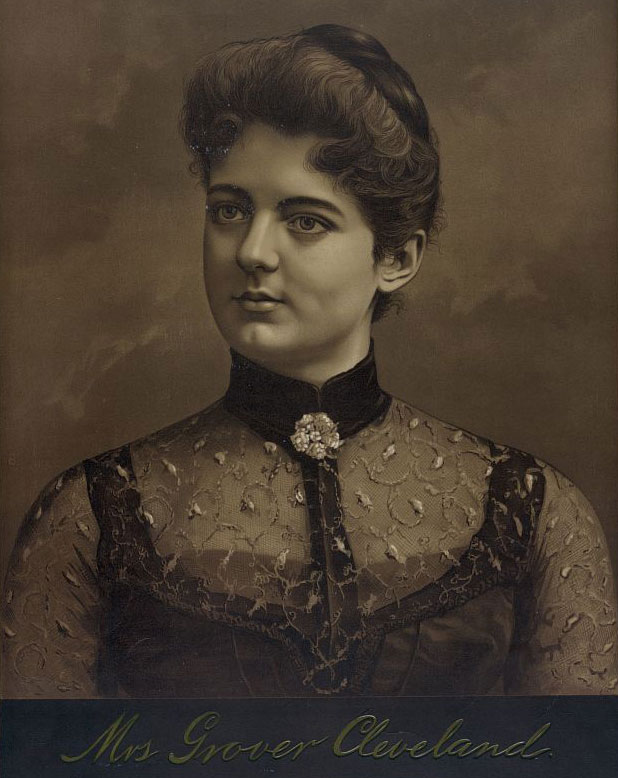 The young, lively, fashionable Mrs. Cleveland brought a breath of fresh air to both the life of the President and consequently the White House, and quickly endeared herself to all she met

The Clevelands took a long trip around the nation and Frances charmed everyone. She spent long hours with Sarah Polk, the octogenarian wife of President James Knox Polk, in Nashville, discussing the life of a President’s wife, and how to cope with the strains and vicissitudes of life in the White House. 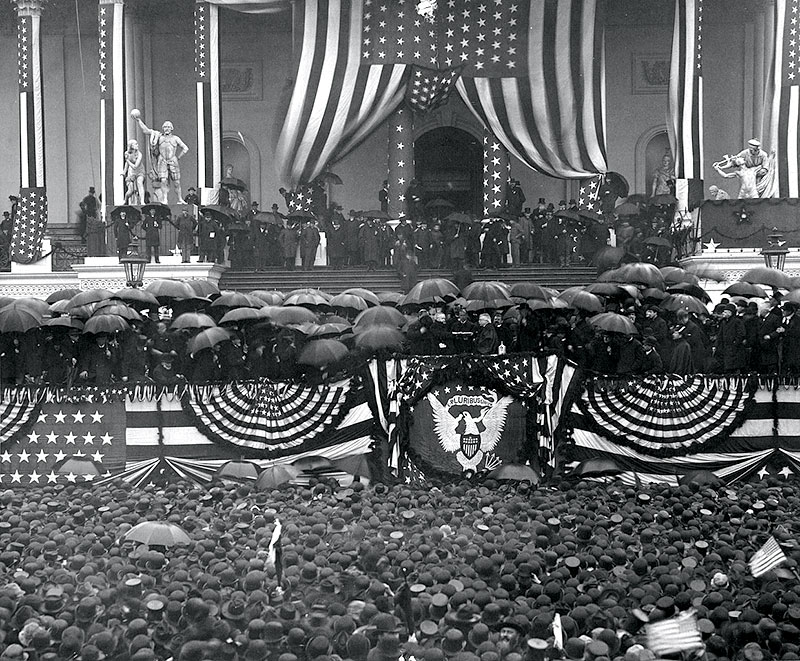 The inauguration of Benjamin Harrison, who defeated Cleveland for the Presidency in 1888. Cleveland is seen holding Harrison’s umbrella. Cleveland would only be absent the White House for four years before returning for a second term in 1893.

After Grover was defeated for a second term in office in 1888, the effusive Frances told the White House staff not to make any changes in the décor, saying that she and Grover would be back in four years, which turned out to be true. In the interim they had their first child, Ruth, after whom a chocolatier named a candy bar “Baby Ruth.” Upon their return to the White House after the election of ‘88, she had two children, Esther and Marion, while serving as First Lady. 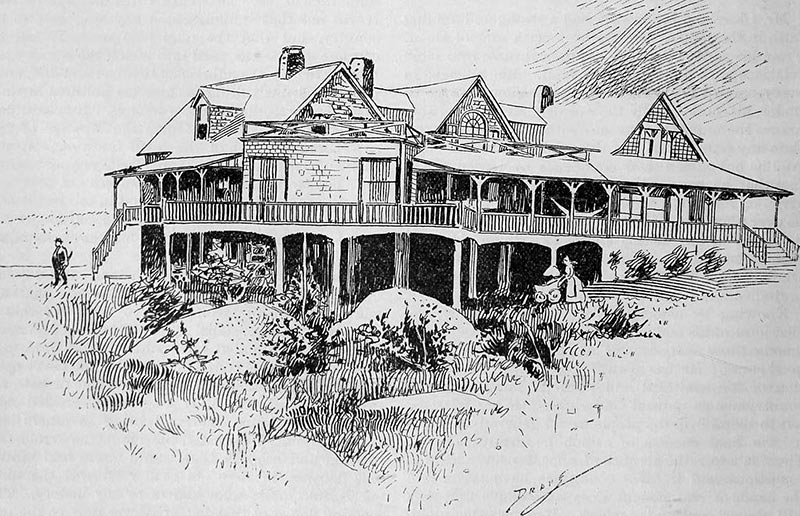 After his second term in office, the Clevelands moved to Princeton, New Jersey, where Frances bore two sons, and where Grover died in 1908, age 71. She married again in 1913, to a professor of archaeology, and remained a person of note in Princeton, where she led the fight against women’s suffrage, announcing that “women are not intelligent enough yet to vote.” Frances died in 1947 at the age of 84, and was buried with Grover, whose gravestone reflects both of their characteristic modesty in life, with only their names and dates. There is no reference to his amazing political record, high moral character, and constitutional and marital fidelity, or the fact that his wife made his Presidency more brilliant, delightful, charming and successful as First Lady. 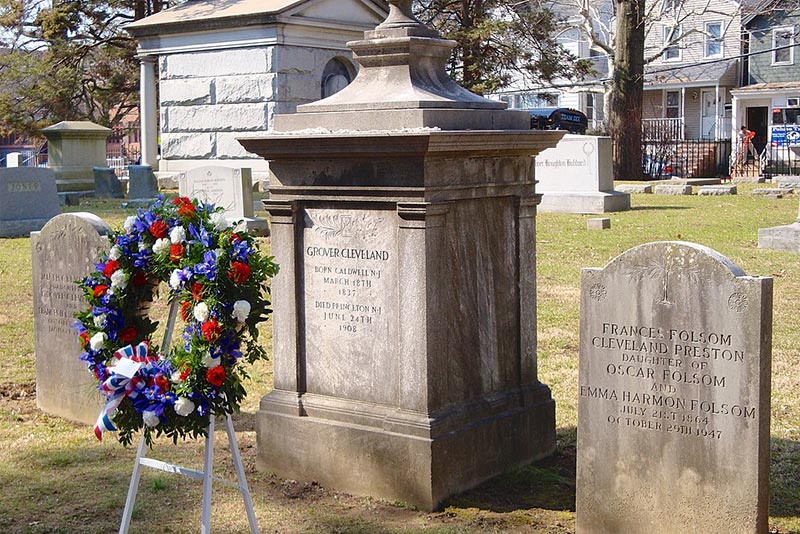 The grave of Grover Cleveland (center), flanked by the graves of his wife Frances (right) and daughter Ruth (left), Princeton Cemetery, Princeton, NJ

Grover Cleveland: A Study in Courage by Allen Nevins (1932)