“Cursed is he who moves his neighbor’s boundary mark. And all the people shall say, ‘Amen.’” —Deuteronomy 27:17

n the year of 1492, Columbus sailed the ocean blue, or so I learned at an early age. In fact he came to the Americas four times, never setting foot on the North American continent. The Caribbean islands and South America, however, fell under the gaze and tread of the Genoese Admiral of the Ocean Seas, who laid claim to all of it for King Ferdinand and Queen Isabella of Spain. Those two monarchs petitioned the Spanish-born Pope in Rome—Alexander VI—to issue bulls (a formal and legally binding papal declaration) affirming a geographical line that would give to Spain all the land of the New World. Catholic Portugal, home of the leading European maritime explorers prior to Columbus, cried foul and called for a bilateral meeting to adjust the global divisions that otherwise cut them out of their routes of discovery and trade. The Treaty of Tordesillas settled the matter, and the providential future languages, religion, and cultures of hundreds of millions of people was set in motion, and played out over the next five hundred years and beyond. 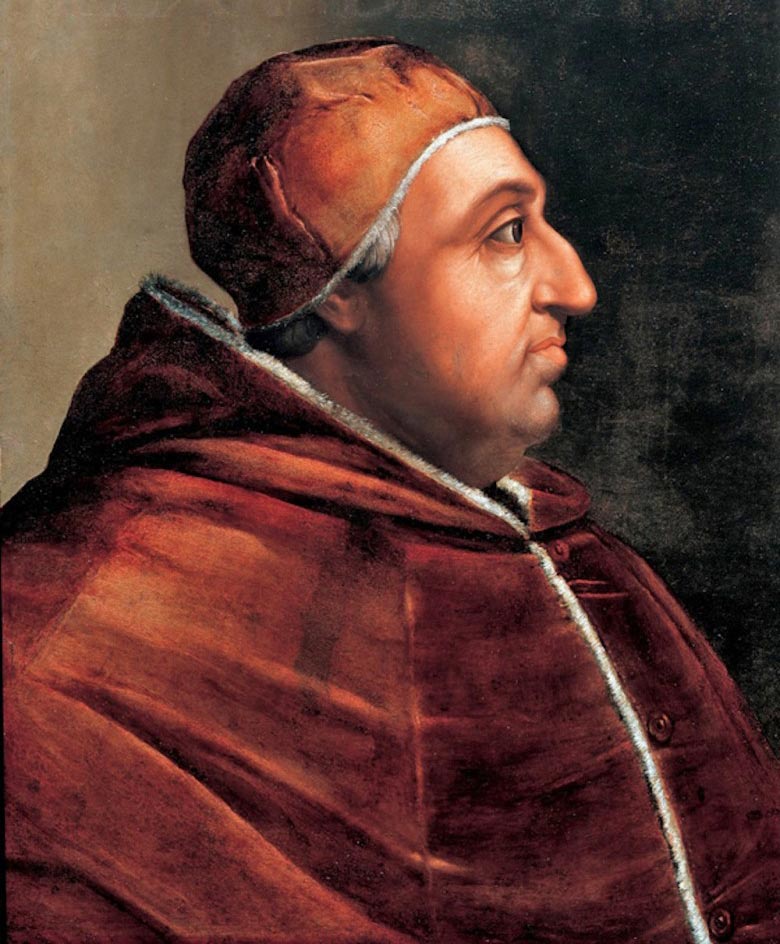 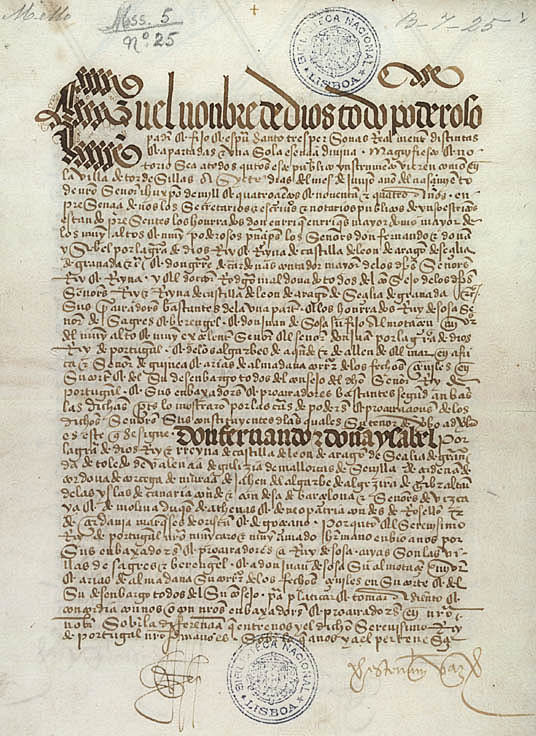 Written in Spanish, the front page of this copy of the treaty is owned and held by Portugal

As the Roman Empire was falling apart in the fourth and fifth centuries, the province of Hispania, the Iberian Peninsula, fell under the sway of a Germanic horde known as the Visigoths, who mostly held to the heretical views of Arian theology. Most of the Roman citizens of Hispania (Spain) believed Trinitarian Christian doctrine. In the eighth century, following a hundred years or more of raids, Muslim Berbers and Arabs crossed from North Africa and conquered the Visigoths, establishing Muslim hegemony in its furthest western advance into Europe. The Reconquista began right away, in bits and pieces, and by the late 15th century, succeeded in pushing the Muslim rulers still in authority out of their pockets of resistance and back to North Africa. Two noble Spanish houses then united with the marriage in 1469 of two teenage royals of Aragon and Castile: Ferdinand and Isabella, who pooled their resources, blood, and kingdoms. The newfound wealth and unity enabled them to subsidize expeditions of exploration, which began with Christopher Columbus sailing westward to “The New World,” and expanded to multiple conquistadors over the next century. 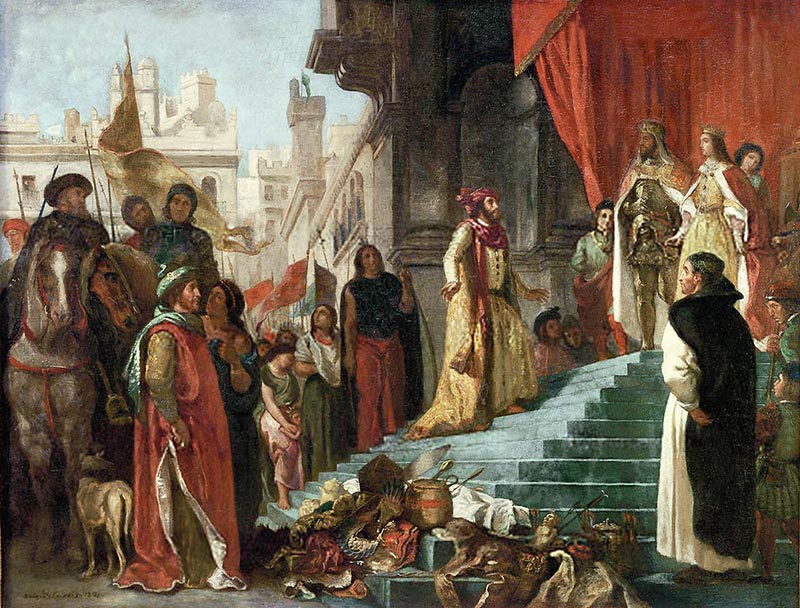 Central and South America and the Caribbean hinted at wealth in gold, silver, gems, natural resources, and slaves beyond the wildest imagination of the Spanish monarchs. Their daring sea-captains and missions-minded priests anticipated new trade routes to the Orient also to the greater glory of Spain and the Roman Church. God, it seemed, had blessed the providential foresight and investment of the Spanish-speaking successors to the Roman Empire. To protect their claims, King Ferdinand concocted a plan to preempt competition from other European powers, especially Portugal, which shared the Iberian Peninsula with Spain.

The Cantino planisphere, completed by an unknown Portuguese cartographer in 1502, is one of the most regarded cartographic documents of all time. It depicts the world as it became known to the Europeans after the great exploration voyages at the end of the fifteenth and beginning of the sixteenth century to the Americas, Africa, and India.

Portugal, the westernmost European nation, had fallen under the rule of the Visigoths in the same centuries as Spain, and was invaded by Muslim armies in kind in the 8th century. Taking to the mountains and providing refuge for Christians fleeing the North African raiders and conquerors (known collectively as Moors), certain noble Christian leaders provided a bulwark to keep the enemies out of the south of France, and initiated the re-conquest of the lands that would become the nation of Portugal. Great battles were fought over a six-hundred-year period (the Reconquista) until the Moors were finally driven out. In 1373 Portugal made an alliance with England, which is the longest-standing alliance between two countries in the world.

Prince Henry the Navigator (1394-1460), a son of King John I of Portugal, initiated what became known as “the Age of Discovery.” As the patron of discovery and exploration, Henry sent explorers through and around Africa, building a trading empire that eventually extended all the way to China. The Portuguese discovered the oceanic trade winds and currents that enabled them to travel thousands of miles. They built trading stations along the African coast, until Vasco de Gama became the first European trader to reach India by sea in 1498. 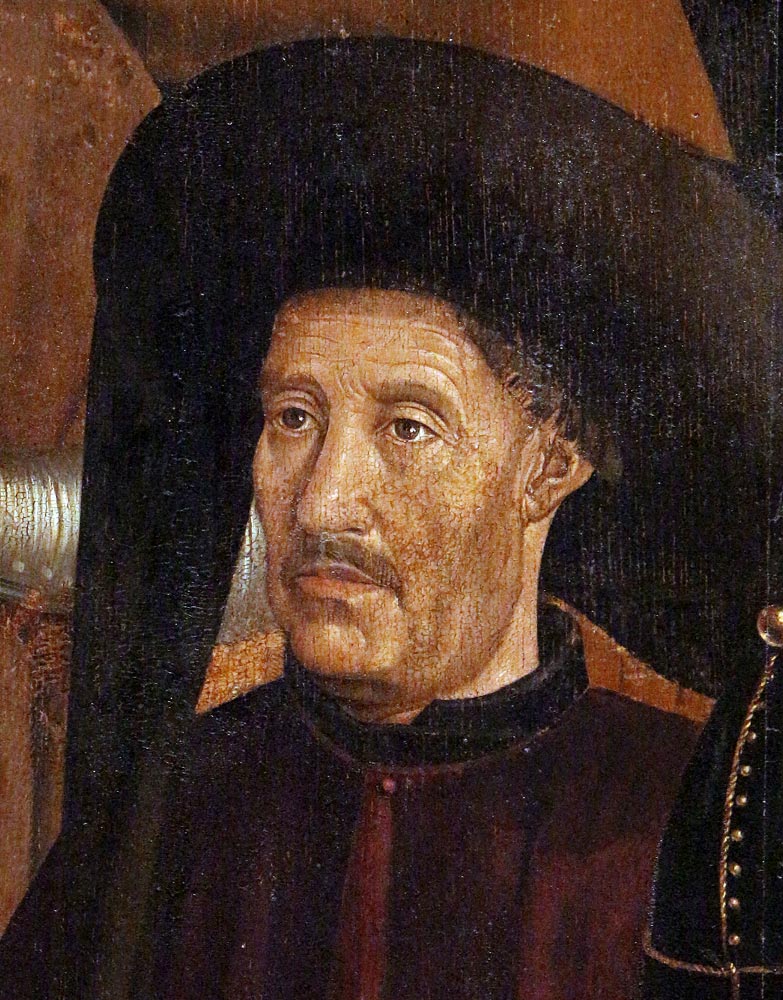 When the Pope declared the demarcation line of the western world via papal bull in 1493, Portugal demanded a meeting to adjust the location of the line. The two countries met at Tordesillas in Spain and drew the line 1,185 miles west of the Cape Verde Islands on June 7, 1494. Every land west of that line would belong to Spain, and east of it to Portugal. As a result, Portugal conquered the largest nation, Brazil, in South America, having discovered it in 1500 (Pedro Cabral), but Spain took all the rest. The Treaty of Tordesillas was viewed by both nations as the open door of exploration and conquest of the New World, with papal blessing but without significant other European competition, for another century. Every South American and Caribbean island became the property of Spain, establishing with their conquests the Spanish culture, especially the Spanish language, Roman Catholic Church, and eventually, about 4 million African slaves to Latin America and 3.5 million to Brazil, collectively 95% of the total brought to the New World. 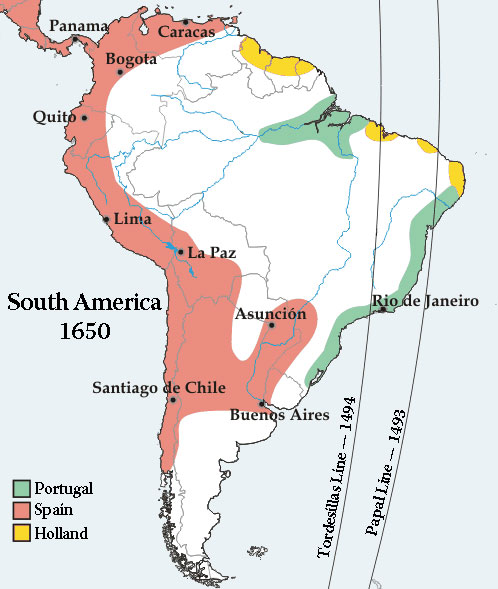 A map of South America as it appeared in 1650, showing areas claimed by Portugal, Spain and Holland, and both the Papal demarcation line of 1493, as well as the redrawn Tordesillas line of 1494