“Do not move the ancient landmark which your fathers have set.”
—Proverbs 22:28

eorge Washington Parke Custis grew up in the household of President George Washington in New York, Philadelphia and Mount Vernon. Custis’s father had died at Yorktown shortly after the surrender of the British Army there in 1781, and George (nicknamed “Wash”) and his sister Nelly were taken in by Martha Washington, their grandmother. Custis eventually married and had but one legitimate child that lived to adulthood, Mary Anna Randolph Custis, who married Army officer Robert E. Lee. The Lees inherited the magnificent plantation house called “Arlington” that sits on a high bluff overlooking Washington, D.C. from the Virginia side of the Potomac River. The house was full of artifacts, furniture, and other possessions of George Washington, the man Robert E. Lee most admired and patterned his life after. 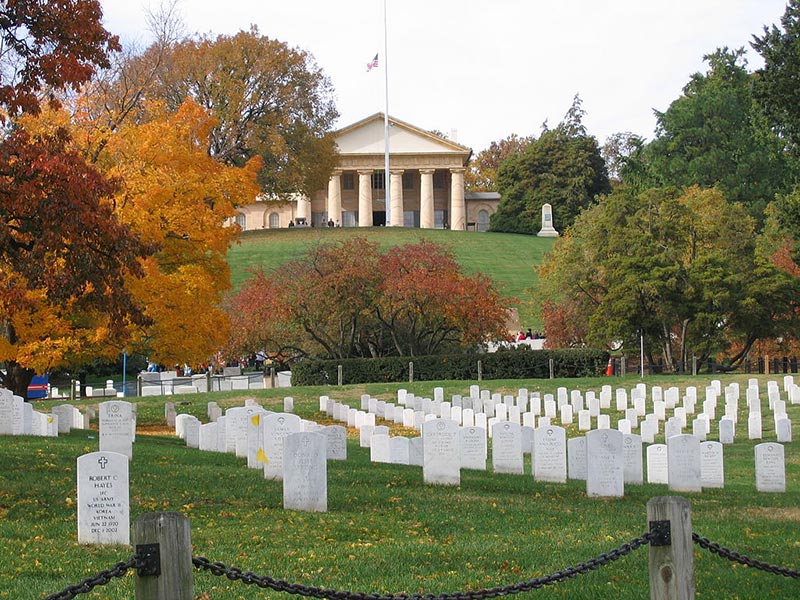 Arlington National Cemetery in the foreground, with Arlington House on the hilltop overlooking the cemetery. The flag in front of the house is flown at half mast during funerals.

Upon the secession of Virginia from the Union, the Lees departed Arlington, giving the keys to a trusted servant and instructing the other ones to continue their routines and take care of the property until the Lees’ return. On May 24, 1861, 14,000 Union troops crossed the Potomac River into Virginia, and Arlington House and property were occupied by soldiers in blue. Mrs. Lee, in a real fury, wrote letters to the occupiers asking them to allow the Lee servants access to Washington, where some of their families lived and where they pursued some of the supply and business of the plantation. General Irvin McDowell, a good friend of General Lee, accommodated Mrs. Lee also, by storing the George Washington artifacts in D.C., after some were stolen by marauding soldiers. He also lived in a tent on the lawn instead of occupying the house. 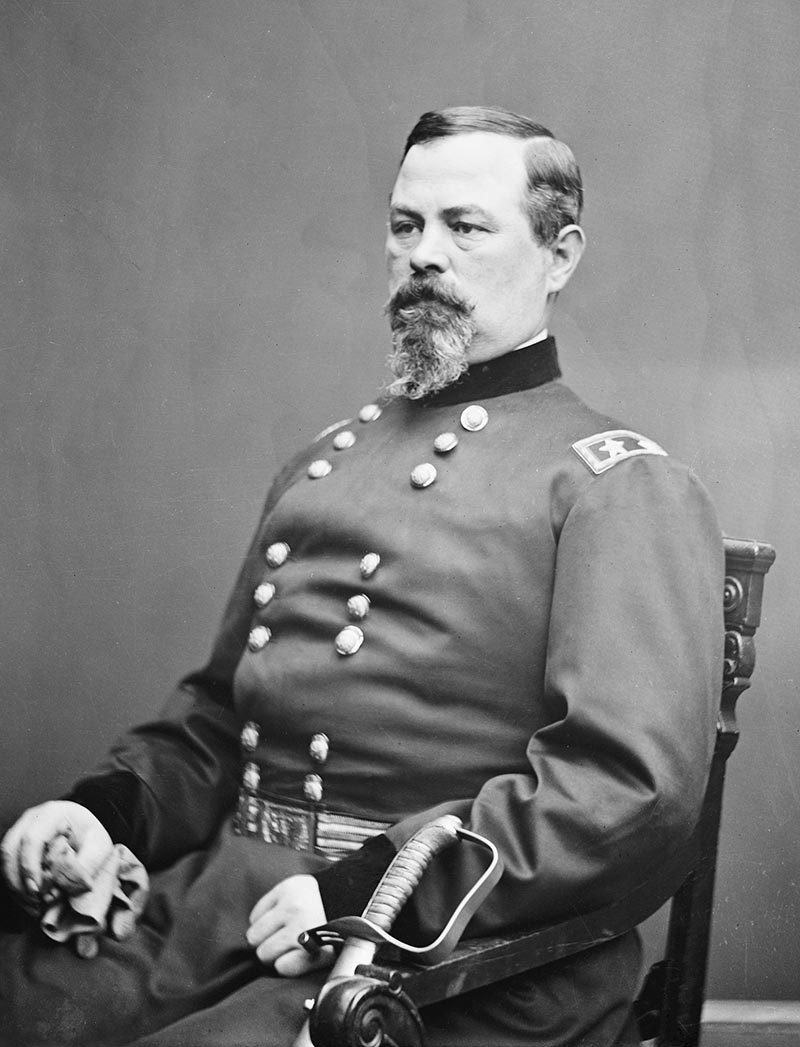 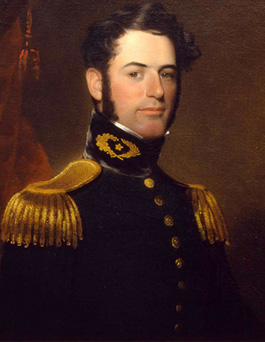 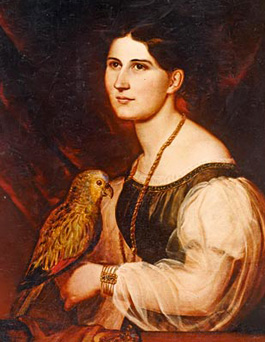 Arlington Cemetery is just one of the iconic stops on our Heart of American History tour October 11-15! Learn More > 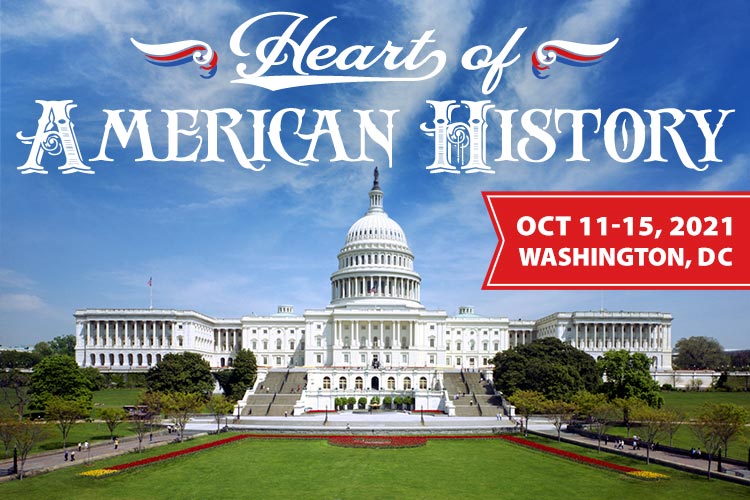 With the coming of serious combat at First Manassas, the Peninsula Campaign, and the succession of battles of 1862-3, multiple thousands of wounded soldiers packed Washington, D.C. Twenty-two new hospitals were created just to house the wounded from the Peninsula battles. Thirteen churches were filled with the sick and wounded, along with the Smithsonian, Capitol Building, Georgetown College, Republican headquarters, and many canvas tents erected everywhere space could be found. For the next three years, more than 50,000 patients crowded the Capitol. Thousands of soldiers died. By the end of 1862, Congress had authorized fourteen new military cemeteries around Washington. In 1864 Arlington was added to the list of National Cemeteries, with the burial of a twenty-one-year-old private from Pennsylvania. 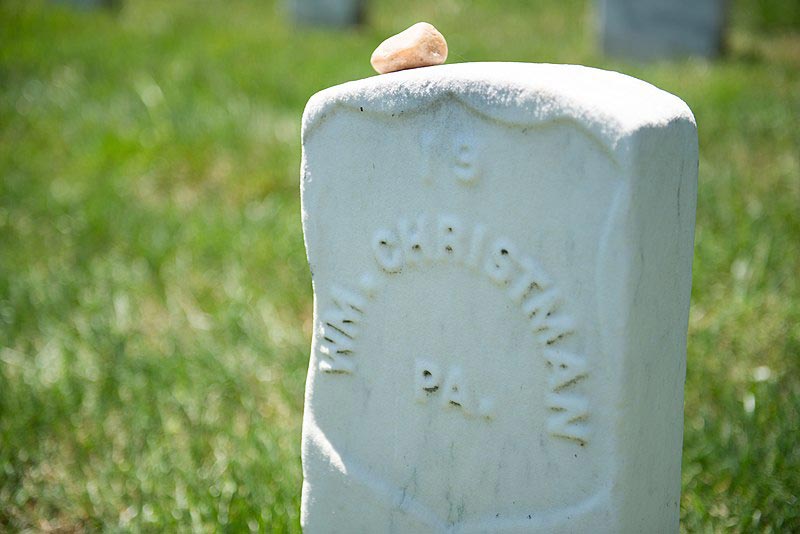 Headstone of Pvt. William Henry Christman (1844-1864), the first soldier to be buried in Arlington National Cemetery 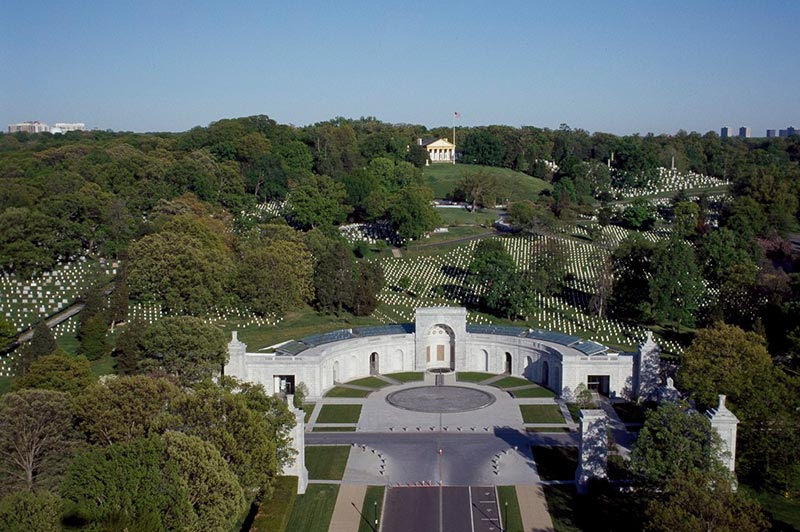 An aerial view of a portion of Arlington National Cemetery. Arlington House can be seen in the background.

The Federal Government had placed a large tax on the Arlington Estate and many others around northern Virginia. When the tax bills went unpaid because the owners were behind Confederate lines, the property was auctioned. Mary Lee had sent a cousin to the tax office to pay the fee, but was told that the owner had to appear in person. Mrs. Lee was crippled and living in Richmond. The government bought the property. One of the Lees’ slaves—James Park, who had remained behind to tend the property—buried the Union soldiers in the “lower cemetery” far from the house, but with the wave of casualties from the Overland Campaign and the overwhelming numbers of men dying from disease, the burial grounds quickly expanded. Officers were buried near the house, at higher elevation and with more pomp than the common soldiers, beginning with Captain Albert H. Packard of the 31st Maine, on May 16, 1864, who was buried in the Lee garden. Secretary of War Edwin Stanton and Quartermaster Department head Montgomery Meigs, both of whom hated Robert E. Lee, determined to make Arlington forever uninhabitable by living persons, and declared 200 acres of the estate a National Cemetery on June 15, 1864. 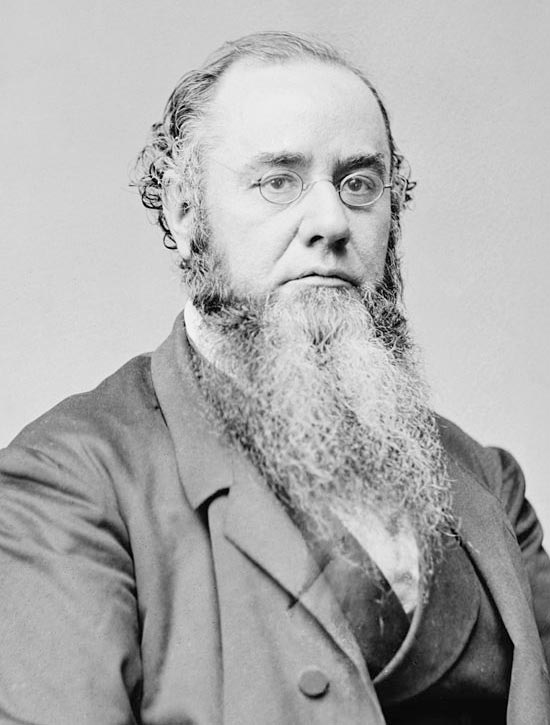 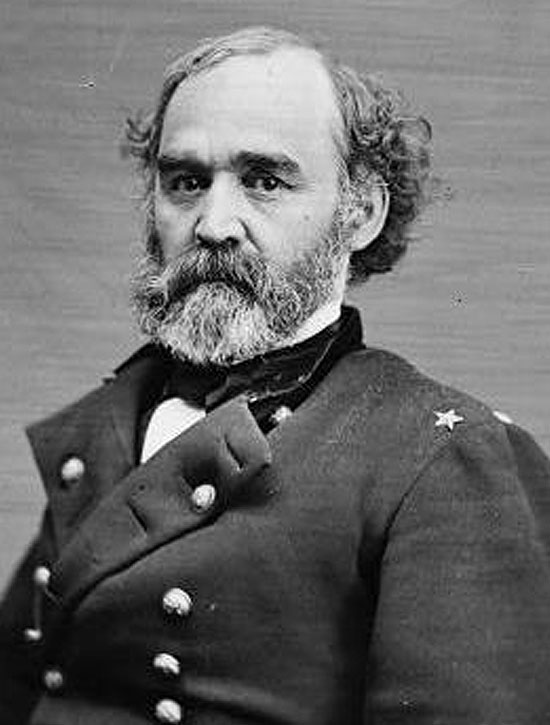 With the end of the war, the Lees unsuccessfully sued to get their Arlington property from the Federal Government, although they were paid for the seizure, despite the graves of 12,000 Union soldiers. Determined to prevent the Lees from returning, Meigs sent crews to unearth Union graves around Virginia battlefields to keep the cemetery expanding, adding 2,000 more men, most of them unknowns. Meigs promoted the building of larger and larger monuments and memorials, turning the cemetery into the premier final resting place of soldiers. 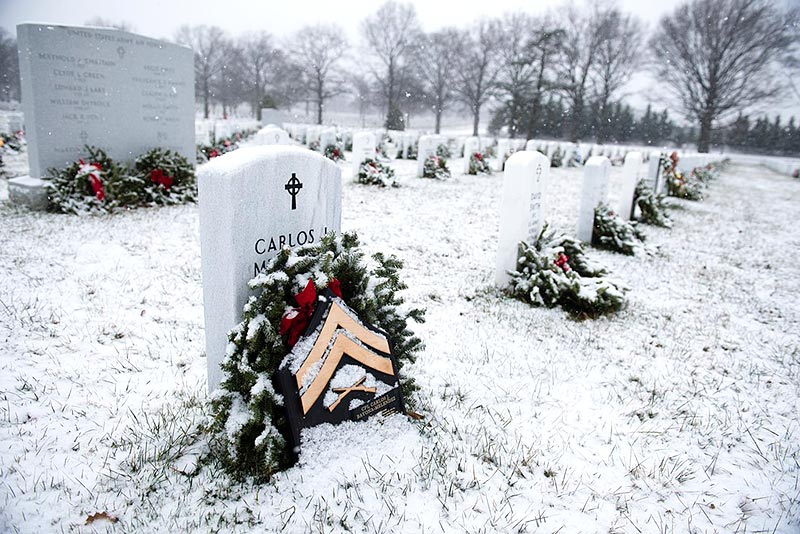 The original 200 acres set aside for a cemetery has grown to 639 acres. The Tomb of the Unknown Soldier is guarded there every day of the year, as it looks out over the more than 400,000 graves. About 400 Medal of Honor recipients are buried there, along with five 5-star Generals and two Presidents of the United States. Soldiers who die on active duty, retired military service members and certain family members are entitled for burial at the Arlington National Cemetery. There is a beautiful monument designed by Moses Ezekiel dedicated to the Confederate dead, and the Arlington mansion of Robert E. Lee still stands, and is in the process of preservation. Every American should visit Arlington and reflect on the sacrifices made to protect their liberties and their homes. 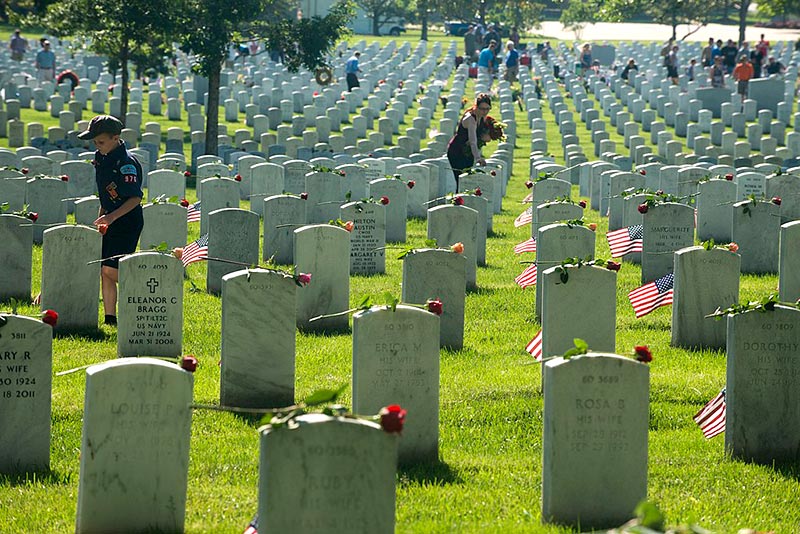 “Show me the manner in which a nation or a community cares for its dead and I will measure with mathematical exactness the tender sympathies of its people, their respect for the laws of the land, and their loyalty to high ideals.” 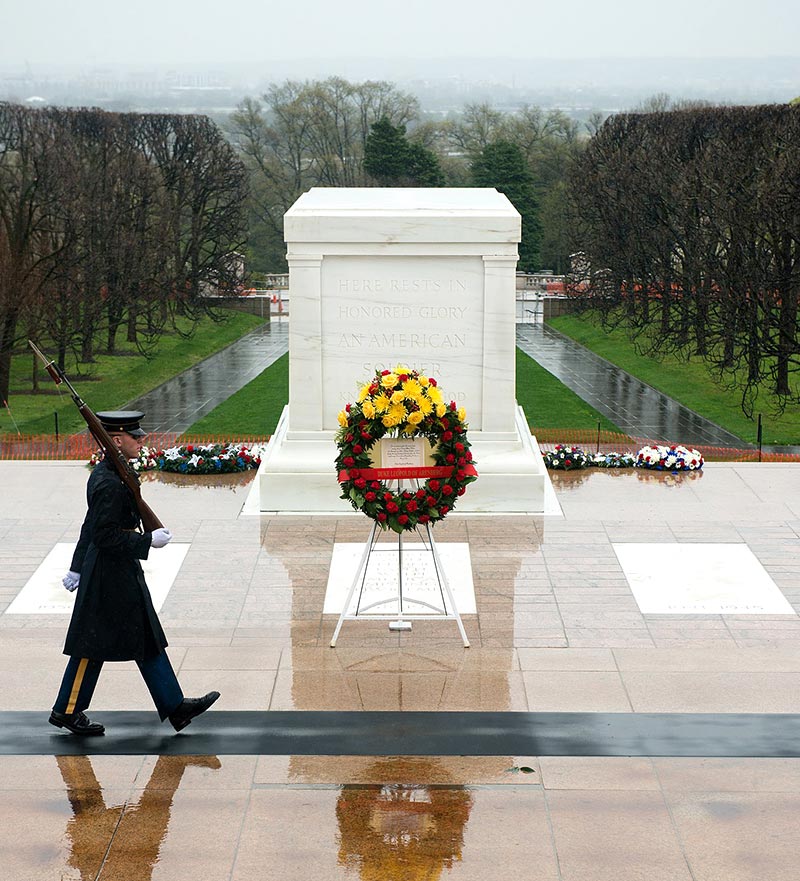