“For indeed, a person does not know his time: like fish that are caught in a treacherous net and birds caught in a snare, so the sons of mankind are ensnared at an evil time when it suddenly falls on them.” —Ecclesiastes 9:12

n September 2, 1945, Japan signed the “instrument of surrender” to the Allied forces, aboard the battleship USS Missouri. The United States hoped that the war would have drawn to a close after the eighty-two day battle of Okinawa April through June, which had cost Japan about 110,000 killed and the destruction of more than 1,400 aircraft and sixteen naval warships, compared to some 20,000 American dead, 763 aircraft lost and twenty-three ships sunk. A post-war Japanese memorial on Okinawa contains the names of 240,734 dead, which includes more than 40,000 civilians who died in the campaign. While the Americans planned the invasion of the main Japanese islands over the next two months, and conducted a “conventional” firebombing campaign against Japanese cities, almost obliterating forty-two of them, they also explored diplomatic means to end the war with the unconditional surrender of Japan. 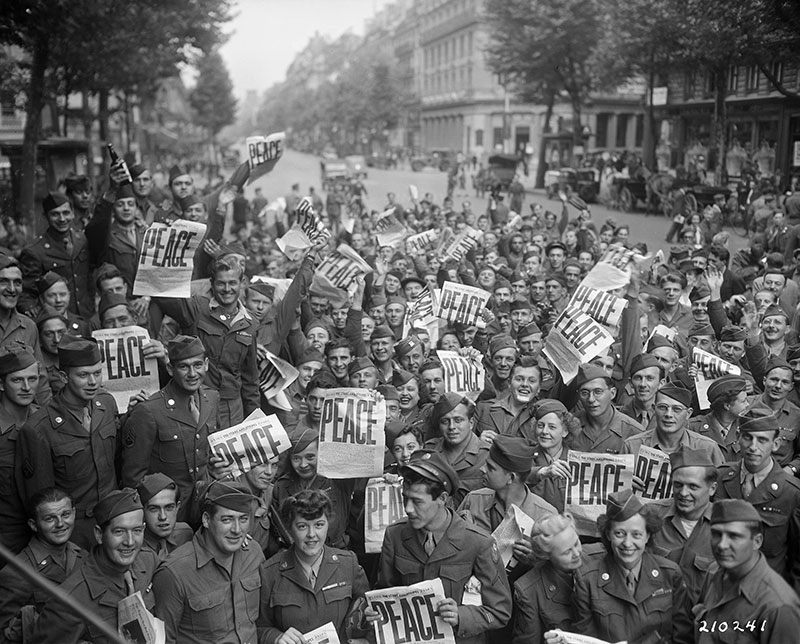 American military personnel gather in Paris on August 15, 1945 to celebrate the unconditional surrender of the Japanese

The Americans were aware that Japanese Emperor Hirohito was interested in finding a diplomatic solution to end the war. The Joint Chiefs in Washington, D.C. remained unconvinced that the more hard-line military leaders of Japan were not determined to fight it out to the last Japanese standing. While the atomic bombs that were developed over the previous three years were on their way to Tinian Island in the Marianas, the decision makers at the Pentagon weighed the issues attendant to using such imprecise weapons that would kill many more civilians than military personnel, regardless of the military value of Hiroshima, Nagasaki, and the other potential targets. 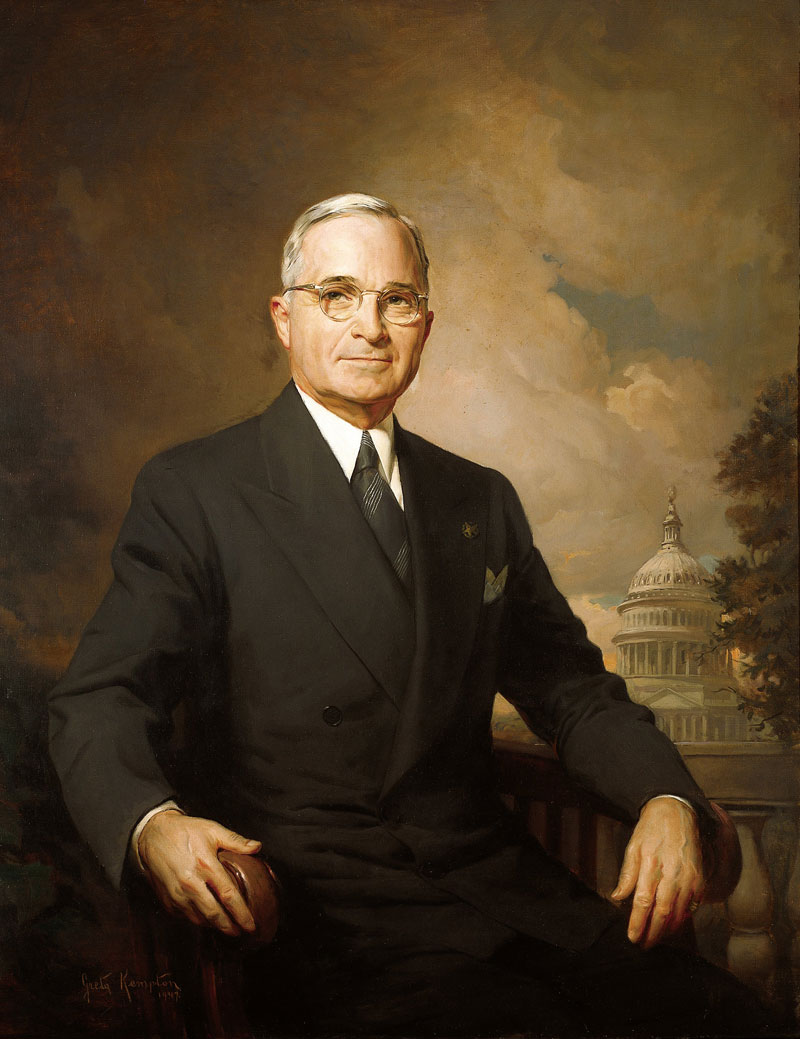 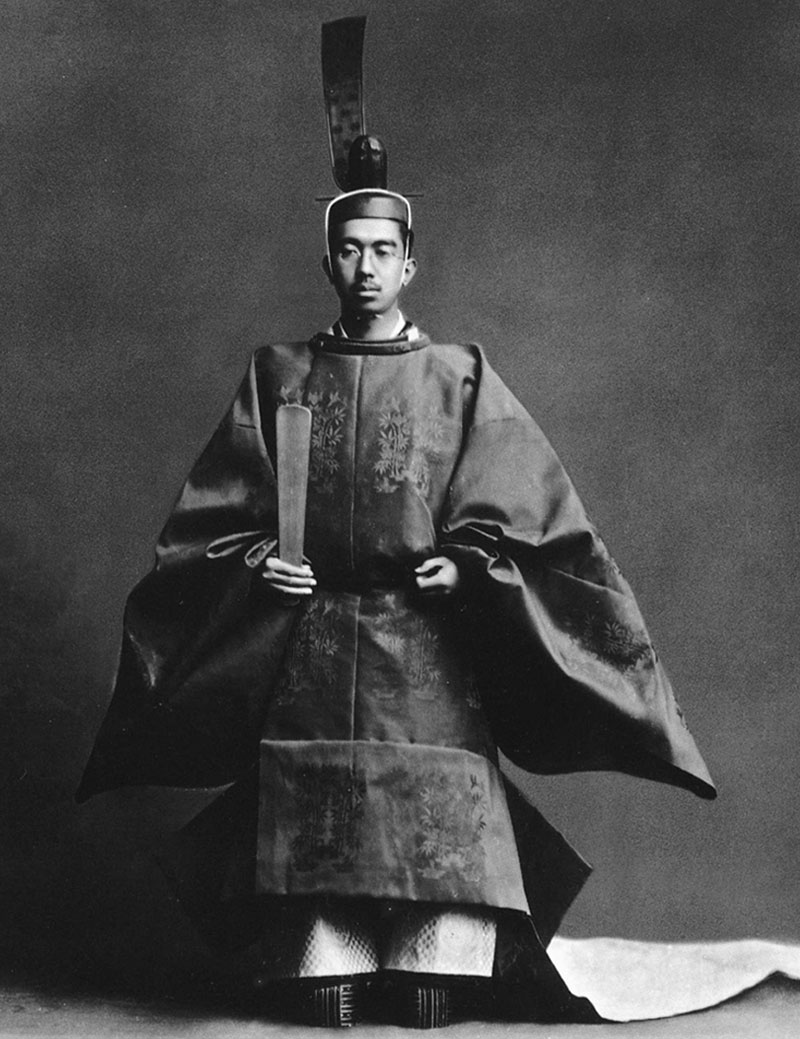 Emperor Shōwa (1901-1989)—commonly known in English-speaking countries by his personal name Hirohito—was the 124th emperor of Japan, ruling from 1926 until his death in 1989

In the end, President Harry “the buck stops here” Truman gave the go-ahead to drop the bombs, accepting responsibility for the consequences. Theodore “Dutch” Van Kirk, the navigator of the Enola Gay (the B-29 Superfortress that carried the nuclear bomb “Little Boy,”) told me personally that he had no qualms whatsoever, then or now, dropping the weapon on Hiroshima on that fatal day, which killed immediately upwards of 66,000 Japanese, mostly civilians, mostly women and children. Probably more than 20,000 more died lingering deaths from the nuclear fallout. His rationale was that it saved many more American lives by preventing the necessity of invading mainland Japan, a sentiment shared by every World War II veteran I have ever met. Nonetheless, the “pragmatic” decision has become, over the years, one of the most controversial in all military history. 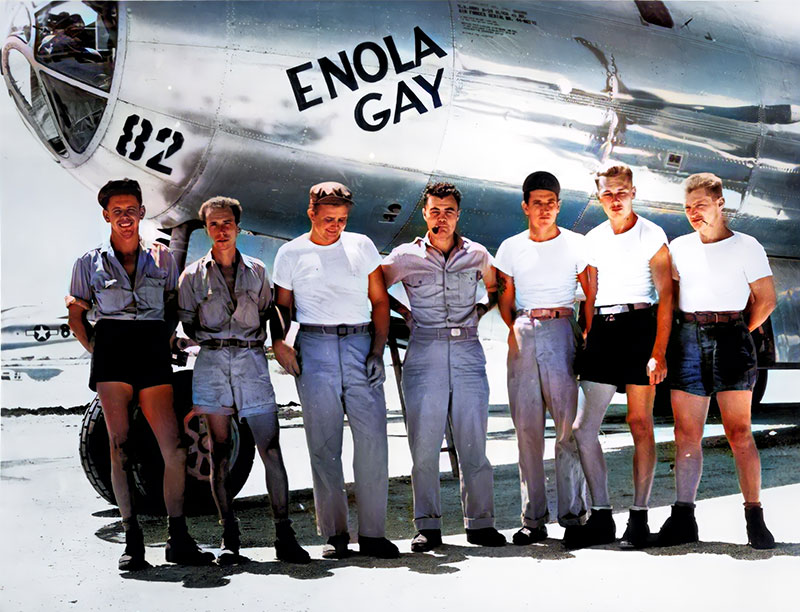 After the second bomb was delivered on Nagasaki, Japan agreed to the American terms of surrender. The President, a Missouri native, chose the USS Missouri, one of the newest American battleships, as the site for the formal signing of the surrender documents. Lieutenant Commander James Starnes—at age 24, the youngest navigator of a capitol ship in the U.S. Navy—through a series of providential circumstances held that position when the Missouri entered Tokyo Bay. He discovered that among his duties was Officer of the Deck, responsible for ceremonial occasions from 8:00 to 12:00 Noon! He told me in an interview in 2007 that he searched out the tallest and biggest men in the Missouri crew to form an honorary guard gauntlet for the Japanese dignitaries (typically slight in stature), generals and diplomats, to walk between as they were piped on deck; a not-so-subtle message for the former enemies to witness. A flyover by hundreds of bombers and fighter planes “that darkened the sky at three hundred feet,” reinforced the impression of American military might. 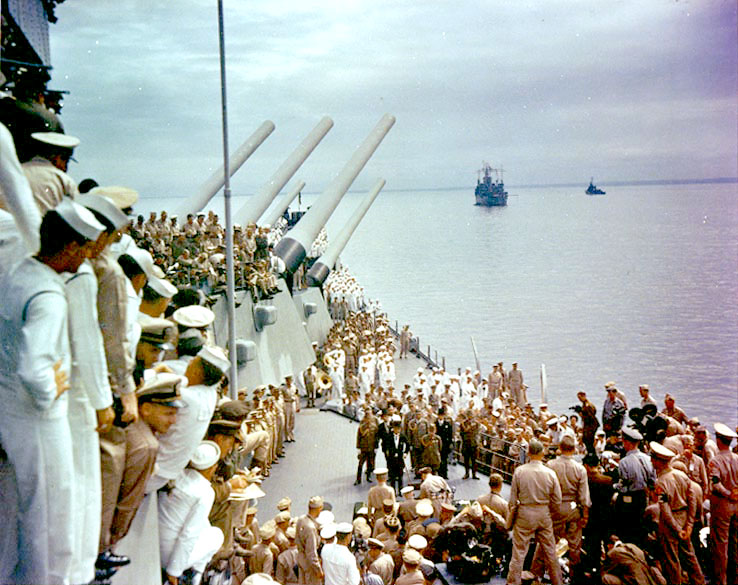 A Japanese delegation arrives aboard the USS Missouri as her crew looks on.

General Douglas MacArthur, Admiral Chester Nimitz, and representatives of nine Allied Nations awaited General Yoshijiro Umezu, Chief of the Japanese Army General Staff, and Foreign Minister Mamora Shigamitsu, and their entourage, who signed the surrender document, now housed at the National Archives in Washington, D.C. It was last displayed in public in 2015. The ceremony aboard the battleship lasted 23 minutes and was broadcast throughout the world. The flag that flew on the Missouri is at the United States Naval Academy Museum in Annapolis. The USS Missouri is anchored at Brown’s Island at Pearl Harbor and is a floating historic site that tells the story of the ship’s service in the Second World War, and especially, the surrender ceremony that made it one of the most famous ships in history. “Dutch” Van Kirk died in 2014, age 93 and Jim Starnes followed him in 2016, age 95, both living out their final years in peace at Stone Mountain, Georgia. 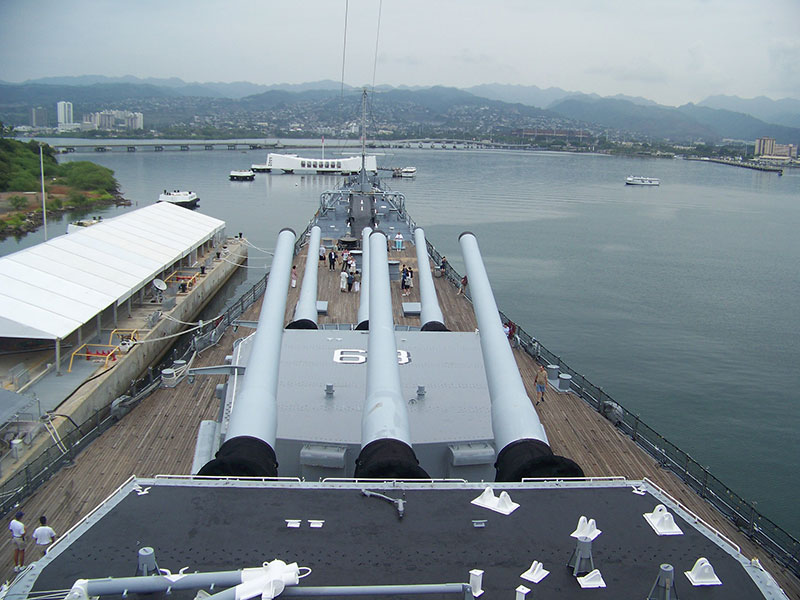 The USS Missouri watching over the sunken USS Arizona in Pearl Harbor, poignant representations of the beginning and the end of WWII for the USA 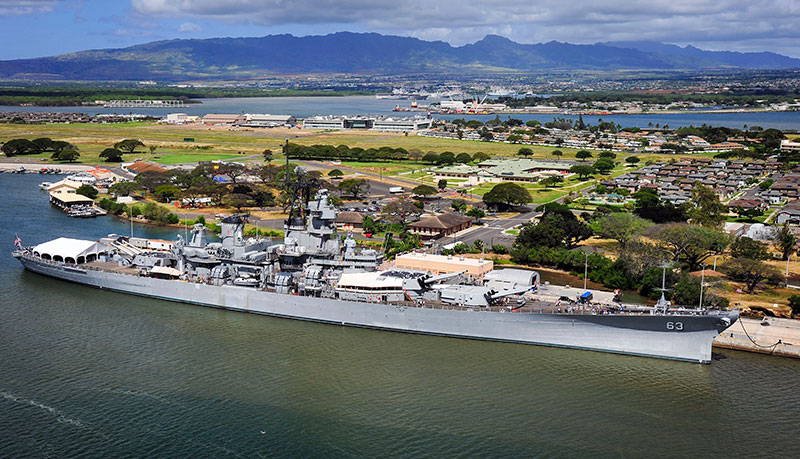 An aerial view of Pearl Harbor, showing the Battleship Missouri Memorial on Ford Island, Joint Base Pearl Harbor-Hickam and the Waianae Mountains