“Count it all joy, my brothers, when you meet trials of various kinds, for you know that the testing of your faith produces steadfastness. And let steadfastness have its full effect, that you may be perfect and complete, lacking in nothing.” —James 1:2-4

he noble and persevering President of the Confederate States, Jefferson Davis, had no intention of submitting to the overwhelming hordes of blue-coated soldiers from the United States, even after the surrender of Robert E. Lee and the Army of Northern Virginia. As long as armed Confederates were still in the field, the fight for Southern independence could continue. He embarked on what became a more than six-hundred-mile-long ordeal, in an attempt to reach Generals Kirby Smith or Richard Taylor, and their southern armies west of the Mississippi River. In what turned into the penultimate chapter in Davis’s battle for survival, courage, loyalty, and honorable principles, stiffened his resolve but could not overcome the relentless pursuit by the forces with whom he had contended for four valorous years. 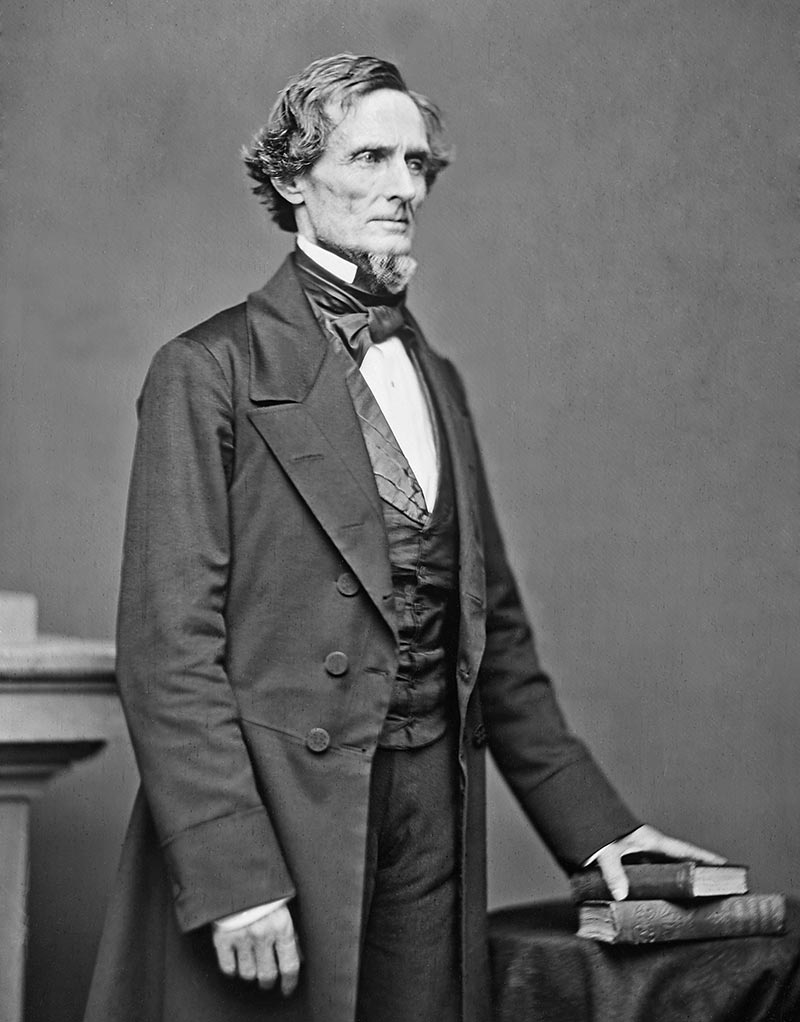 Jefferson Davis (1808–1889), only President of the Confederate States of America 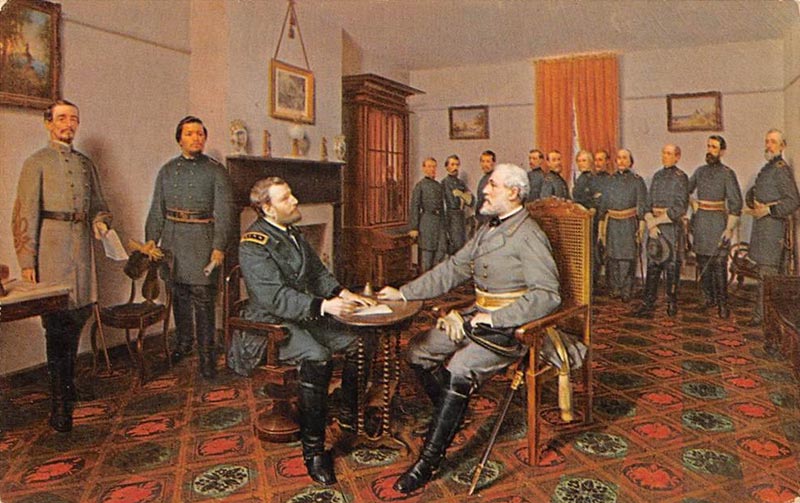 Jefferson Davis was in his place at St. Paul’s Episcopal Church in Richmond, Virginia on Sunday, April 2, 1865, when a courier slipped into the church and silently handed the President a note. In the brief missive, General Robert E. Lee wrote that he and the army would evacuate their position and retreat westward that very evening. Davis rose from his place and went straightway to the executive offices to order the packing up of as many government papers as possible. He had sent his wife Varina and the children on ahead south by train, to be caught up with at a later time. By nightfall, Davis was on the train with his cabinet and aides, chugging southwest from Richmond to establish a new capital in a safer place. He penned a final letter to the People of the Confederate States of America. With an unfaltering hope that Lee’s and Johnston’s armies would soon join him to counter-attack the Yankees, he wrote in conclusion that: 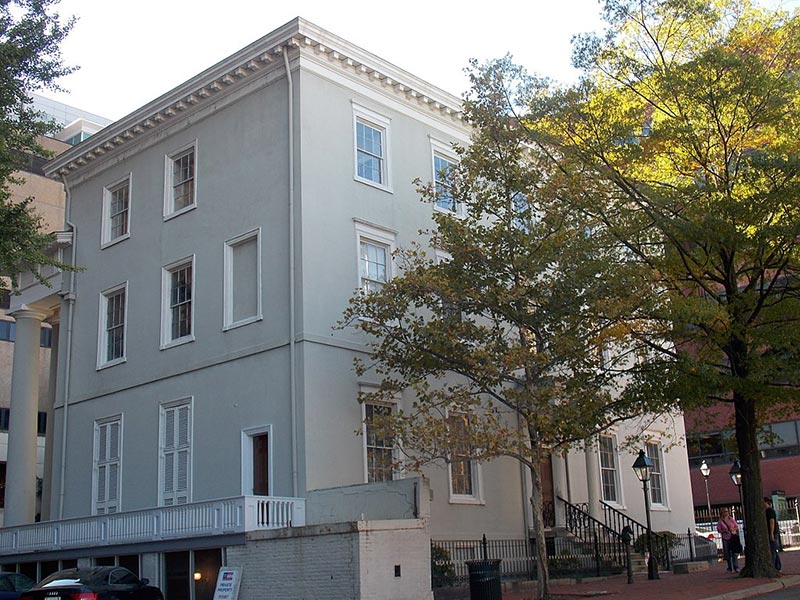 The White House of the Confederacy in Richmond, VA, executive residence of the Davis family from August 1861 until April 1865

“…with confidence in your spirit and fortitude…it is my purpose to maintain your cause with my whole heart and soul…Let us not, then, despond, my countrymen: but relying on the never-failing mercies and protecting care of our God, let us meet the foe with fresh defiance and with unconquered and unconquerable hearts.” 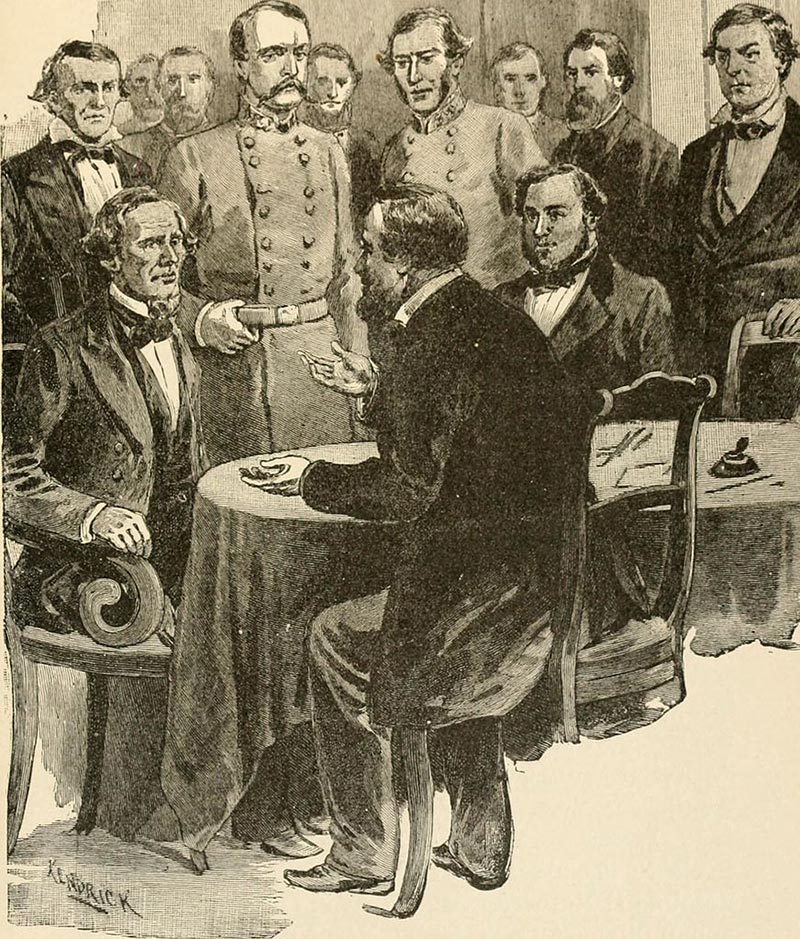 The last meeting of the Cabinet of the Confederacy in Fort Mill, South Carolina

The government in exile established a command post in Danville, Virginia with President Davis and his most loyal and competent cabinet members John Reagan (Post Office), Judah P. Benjamin (Secretary of State), John C. Breckinridge (Confederate General and new Secretary of War), Burton Harrison (Private Secretary), Stephen Mallory (Secretary of the Navy), and a few others. An elite cavalry escort led by Kentucky Colonel David Wark Griffith guarded the presidential column. After a week in Danville, the entourage moved to Greensboro, North Carolina, where they found they were not welcome, out of fear of reprisal, and had to sleep in a railroad car. General Lee had surrendered on April 9, and Generals Johnston and Beauregard gave a report on the bleak military prospects of Confederate arms in other theatres of the war. 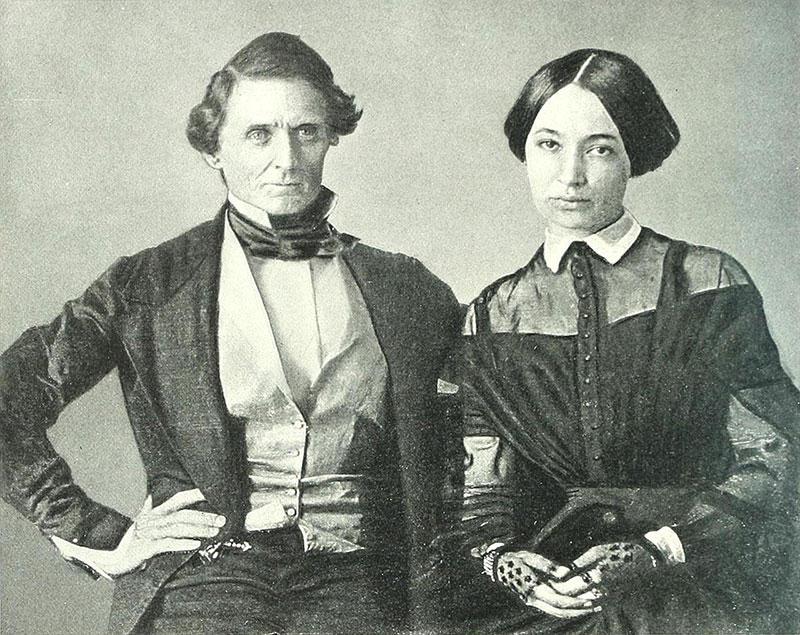 Wedding daguerrotype of Jefferson Davis and Varina Howell, 1845. Varina fled ahead of her husband, along with their surviving children, and met up with him along his escape route.

The persevering President, however, with the encouragement of the ever cheerful and optimistic Judah Benjamin, headed further south by horseback and wagon on April 15. Upon reaching Charlotte, NC, some of the advisors fell away and Secretary Benjamin gave a dire report about continued resistance. The last formal meeting of the remaining cabinet members took place in Abbeville, South Carolina on May 2, whence President Davis and the remaining associates continued to Washington, Georgia where most of the rest dispersed after a final brief convocation and a final payment from the Confederate gold reserves. On May 6, the President entrusted the rest of the Confederate treasury to its last acting treasurer, Captain Micaja Clark. The next day, Jefferson’s devoted wife and their children joined Davis for the final attempt to reach the sea and sail for Texas. 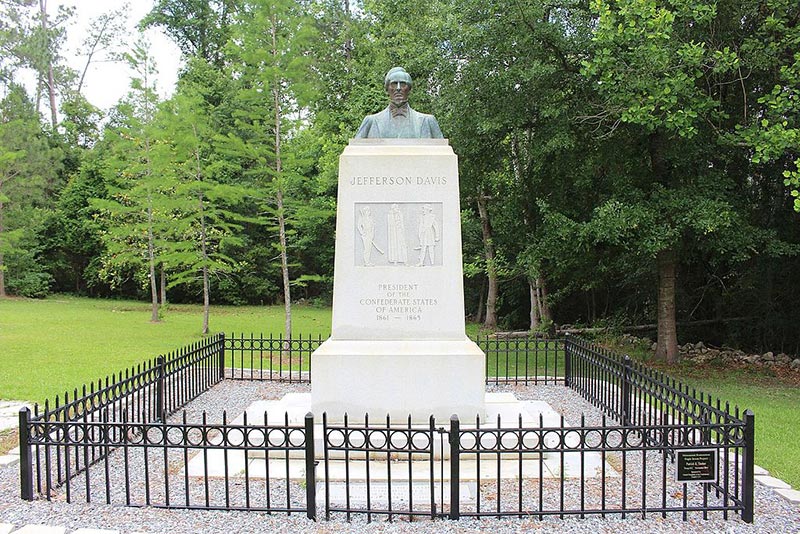 Little did Davis know that certain federal politicians had accused him of the assassination of President Lincoln, and that there was a $100,000.00 price on his head. Union cavalry were swarming the countryside, searching for the Confederate government party. The blue troopers caught up to the Davises near Irwinville, Georgia, surprising them in their camp. Jefferson grabbed an overcoat and made for the creek, but was nabbed by Michigan troopers. They hauled the fifty-seven-year-old President to Fortress Monroe, on the Virginia peninsula, where he was clamped in leg irons to await a trial for both treason and assassination. He languished there for two years while Congress debated procedure. Famous Union generals who were also lawyers offered to defend Davis for free. He had broken no laws and ordered no assassinations, and had been one of the most experienced and respected Senators in Congress in the 1850s. The President bore his predicament with calmness and Christian fortitude, and fellow Southerners who had belittled him and resisted his leadership during the war now felt sympathy and appreciation for his sacrifice and perseverance. 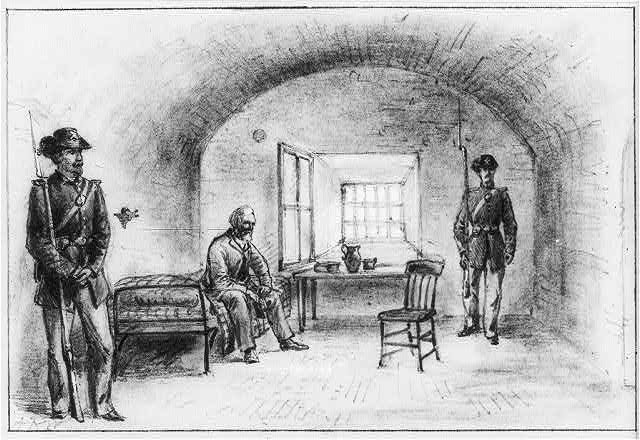 In the end, no case was brought to the courts and Jefferson Davis was released from prison on Christmas Day, 1868, to live as an honored and often revered symbol of the Confederacy for the twenty-one more years God gave him on earth. He never begged for amnesty, for he believed to his dying day that he had done nothing wrong in supporting secession from the Union. Indeed, he hadn’t. The only United States President from Georgia, Jimmy Carter, restored Davis’s citizenship, without his permission, in 1978. 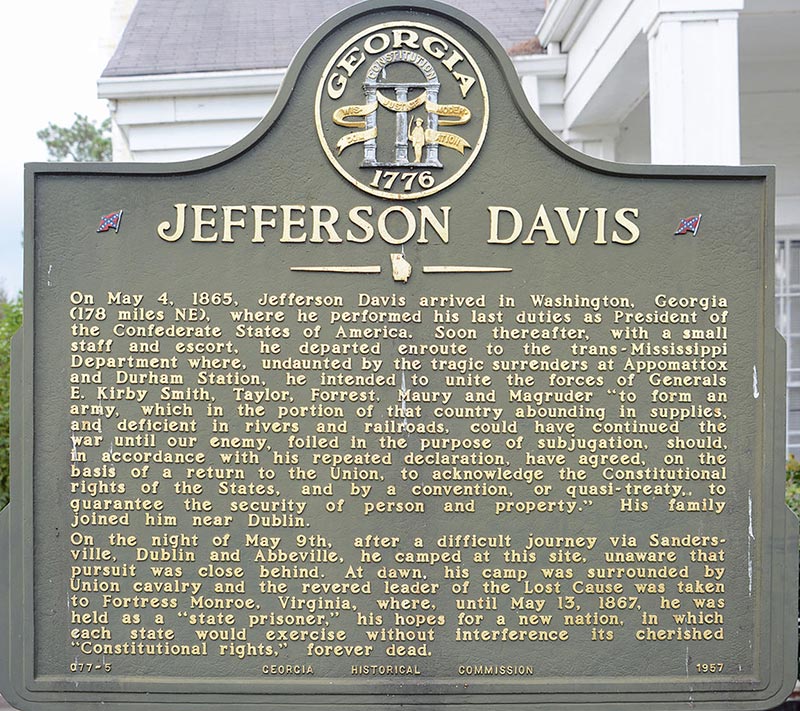 A marker at the Jefferson Davis Memorial Historic Site in Irwin County, GA details the whole story of Davis’s flight and capture