“My substance was not hid from thee, when I was made in secret, and curiously wrought in the lowest parts of the earth. Thine eyes did see my substance, yet being unperfect; and in thy book all my members were written, which in continuance were fashioned, when as yet there was none of them.” —Psalm 139:15-16

f the native Indian leaders that made their mark on American history and are recognized today for their accomplishments, few have as high a reputation or whose name is as well-known as the Mescalero-Chiricahua Apache medicine man, Geronimo. His ferocious defense of his lands and people, fearless perseverance in the face of overwhelming odds, and reckless rebellion against confinement made him a legend in American history. Geronimo’s status as an active warrior for thirty years and a prisoner of war for more than twenty years, puts him in a class by himself. Even the rip-roaring President Theodore Roosevelt feared to release him to return of his native lands, expecting a renewal of Indian wars as a consequence. 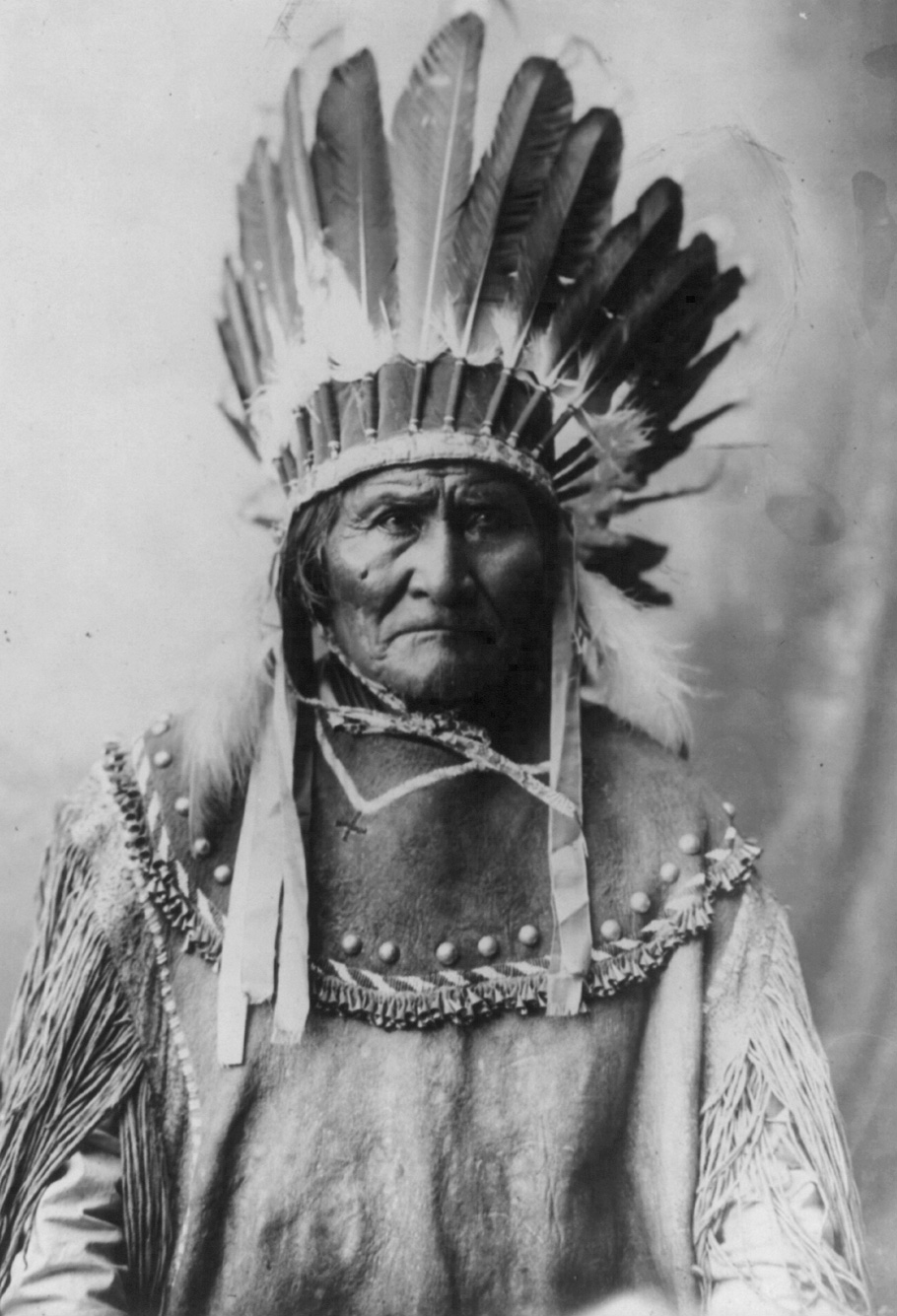 Geronimo (1829-1909), prominent leader and medicine man from the Bedonkohe band of the Apache tribe

The mother of Geronimo gave birth to at least eight children in land that at the time was claimed by Mexico but would later become the American state of New Mexico. He was raised in a clan of an Apache tribe and married the first of his nine wives at the age of seventeen. In a raid in 1858, she and their three children and his mother were murdered by 400 Mexican soldiers when they wiped out Germonimo’s camp while he was trading in a nearby town. Raiding into Chihuaha and Sonora, Mexico by Apaches occurred regularly since the 17th century, in a cycle of revenge and retaliation. From 1820-35, an estimated 5,000 Mexicans were killed and 100 villages destroyed; Apache losses are unknown. Geronimo’s desire for revenge ran red-hot the rest of his life, killing Mexicans without a second thought. War between Geronimo and Mexico lasted to the end of his fighting career, the Governor of Sonora claiming that his sixteen-man Apache band killed more than 500 Mexicans in 1886 alone. 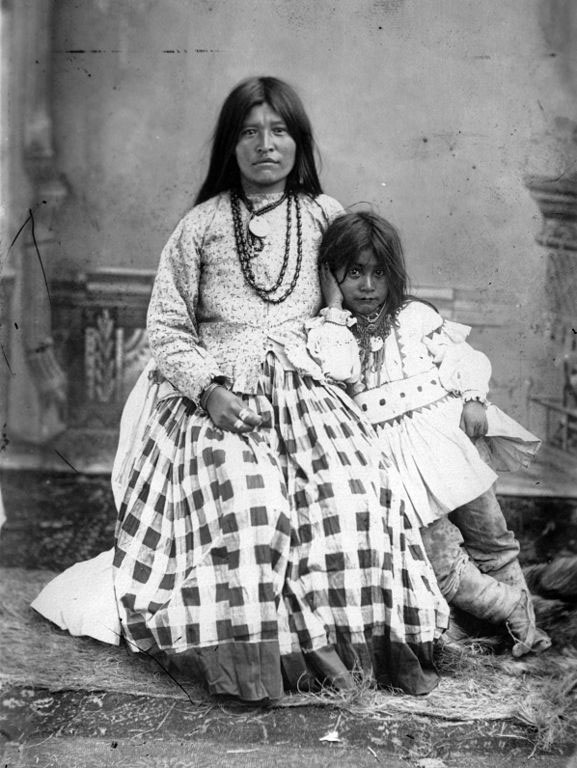 Ta-ayz-slath, one of the wives of Geronimo, and their child 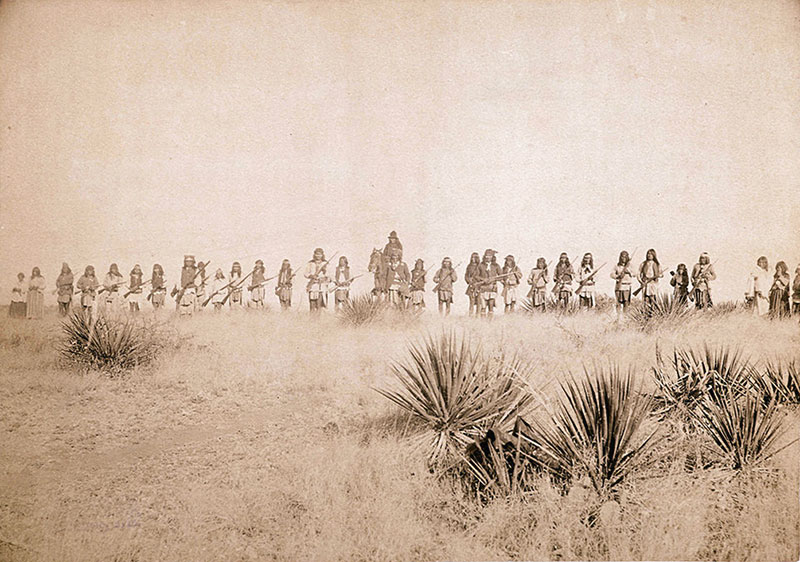 While fighting Mexicans seemed like a lifelong calling for the Apache prophet and leader, along came the USA to take away the Apache lands and force the survivors onto reservations. Just to make them obey and stay, Uncle Sam also sent his versions of Geronimo to enforce the policies—General William T. Sherman, Phillip Sheridan, David Hunter, and their acolytes, fresh from attacking civilians in the War Between the States, and destroying the means of livelihood of Southerners, especially women and children. Geronimo mounted up, loaded his rifle and began adding blue-coated scalps to his resumé. 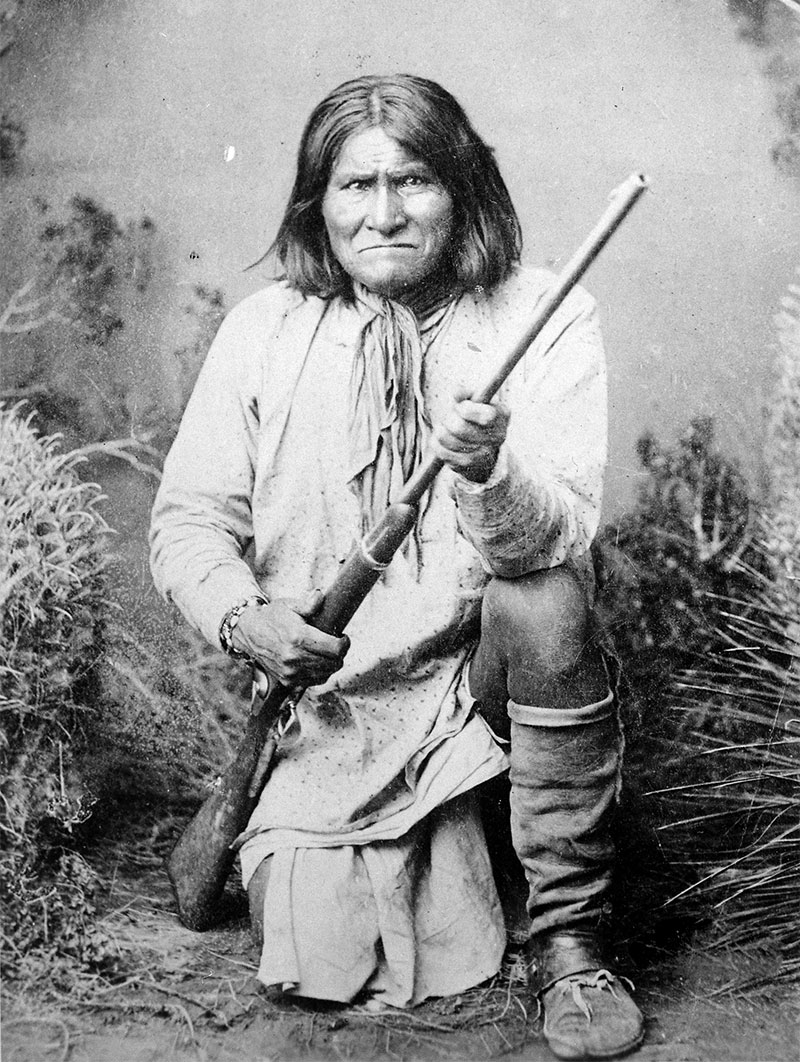 The Apache warriors fought against the United States Army throughout the post-Civil War period until forced onto reservations through treaties in the 1880s. On May 17, 1886, Geronimo joined a number of chiefs, and abandoned (“a breakout”) the San Carlos Reservation in Arizona with his followers and fled to Mexico. Reservation life forced the nomadic bands into static lives of farming or simple trading and they “died like flies” from epidemic diseases that occasionally ravaged the reservations. Crossing into Mexico, the Apaches raided farms and villages with abandon, knowing they would not be followed by American cavalry troopers over the hundreds of miles of desert and mountainous terrain in Mexico. 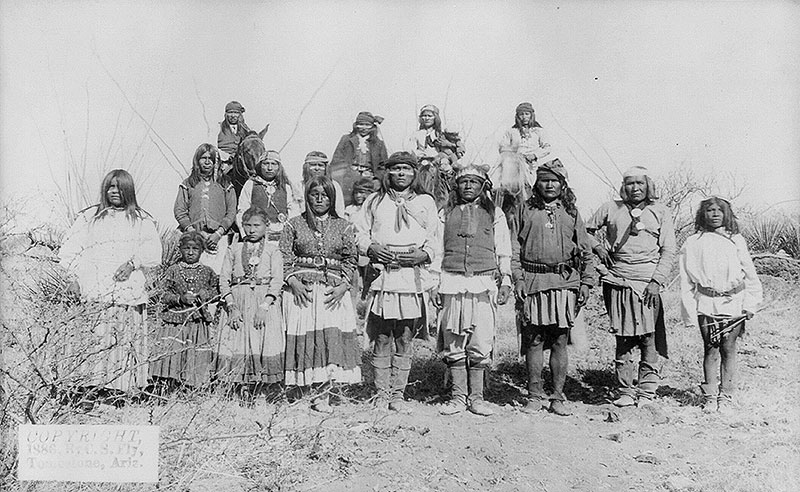 A group of Geronimo’s people and followers (18 men, women and children) in their camp in the Sierra Madre mountains of Mexico, March of 1886

Mexico agreed to let American General George Crook cross the border and pursue the renegade Apaches and run them to ground. More than a hundred Apache scouts assisted the American cavalry. With their tracking ability and knowledge of Indian hideouts and tactics, the scouts successfully led the American soldiers to Geronimo and his company, who had on occasion crossed back into the United States to replenish supplies. During three days of negotiation, Geronimo broke loose with a few followers and headed for the hills again. Sheridan accepted Crook’s resignation and assigned Nelson Miles to bring Geronimo in. Hungry and exhausted, the Geronimo band surrendered in September of 1886. 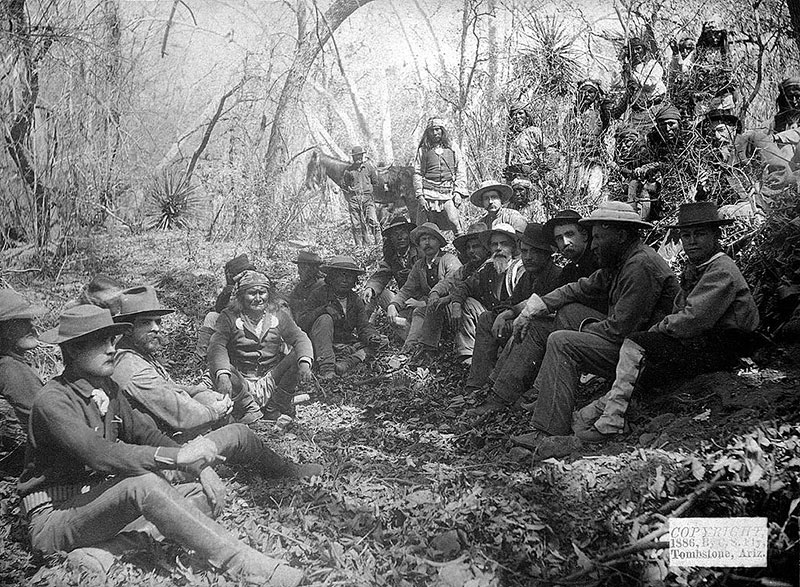 Geronimo poses with members of his tribe and General George Crook’s staff during peace negotiations on March 27, 1886

The rest of Geronimo’s life was spent in captivity at various forts and holding cells in Florida, Alabama, and Oklahoma. He was given leave (always with military escort) to attend Presidential parades, the Pan-American Exposition in Buffalo, and the World’s Fair. He sold buttons off his coat, hats, and Apache artifacts to the curious and the collectors. Geronimo wrote his autobiography, a very fine and revealing work, full of wisdom and cultural interest. 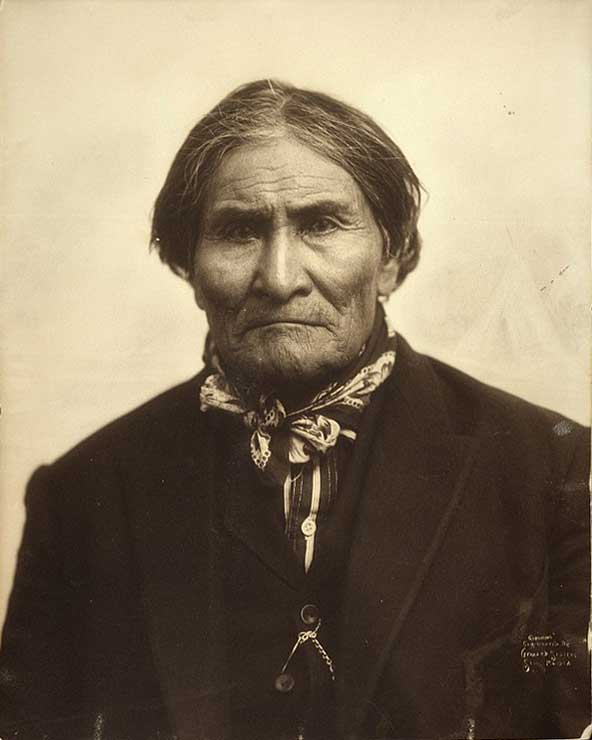 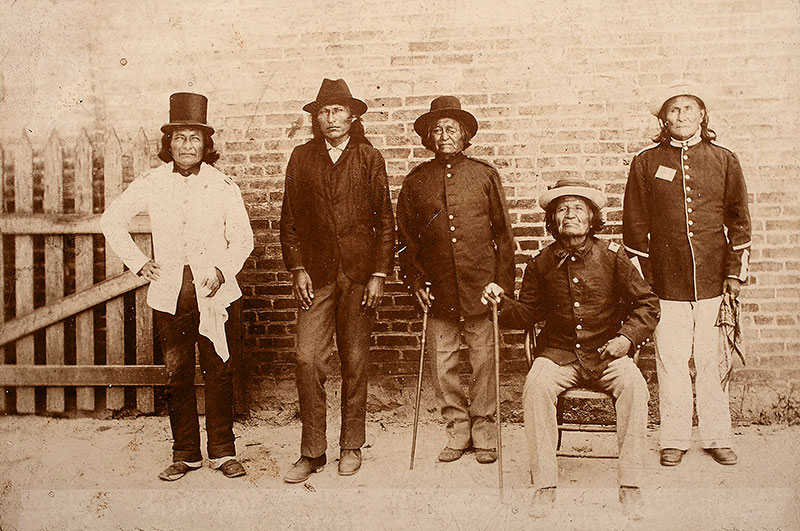 A group of Apache leaders during their imprisonment at Mt. Vernon Barracks, AL, sometime between 1887 and 1894. Left to right: Chihuahua, Naiche, Loco, Nana, and Geronimo.

He became the most photographed Native American in history, rode in automobiles, and even made a Christian profession late in his life. He joined the Dutch Reformed Church but was excommunicated for gambling! The old warrior died of pneumonia at Fort Sill in 1909 and is buried there, never allowed to return to his native lands. American paratroopers shout his name for courage when they bail out into battle. 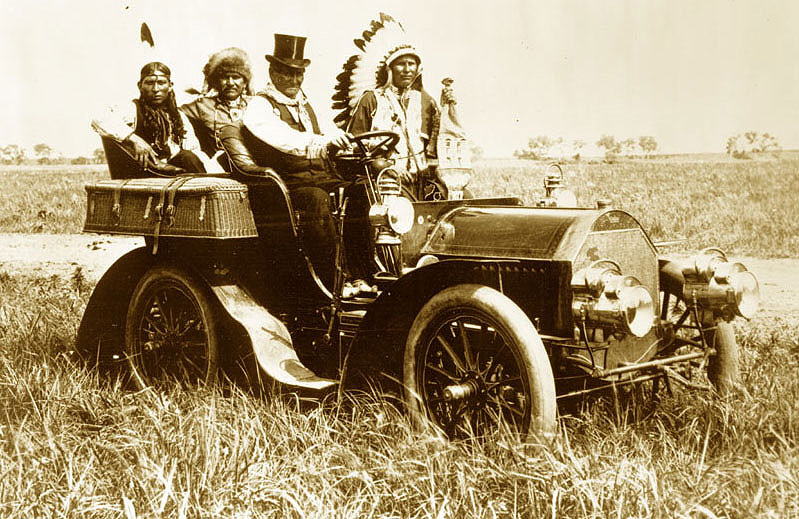