“Who brings forth the chariot and the horse, the army and the mighty man, they will lie down together and not rise again; They have been quenched and extinguished like a wick.” —Isaiah 45:17

e was the most exalted, most feared, most beloved, most hated, most successful, and most famous man of the 19th Century. His military prowess defined combat doctrine for every European country for more than seventy years, and for some, into the twentieth century. He was 5’6” tall, but was protected by an elite personal guard of grenadiers, known as “The Immortals”, who had to stand at least 5’10” tall. He conquered millions and killed hundreds of thousands in the process, and insisted on being called The Emperor of the French. All the world knew him by his singular name, Napoleon, although all the conquered people created their own special but unprintable labels. To the English, he was Boney, the Corsican Fiend, or just “the Monster”. He led the French massed armies and fought all the nations of Europe at one time or another, and usually in coalitions, for almost two decades, before abdicating on April 11, 1814. 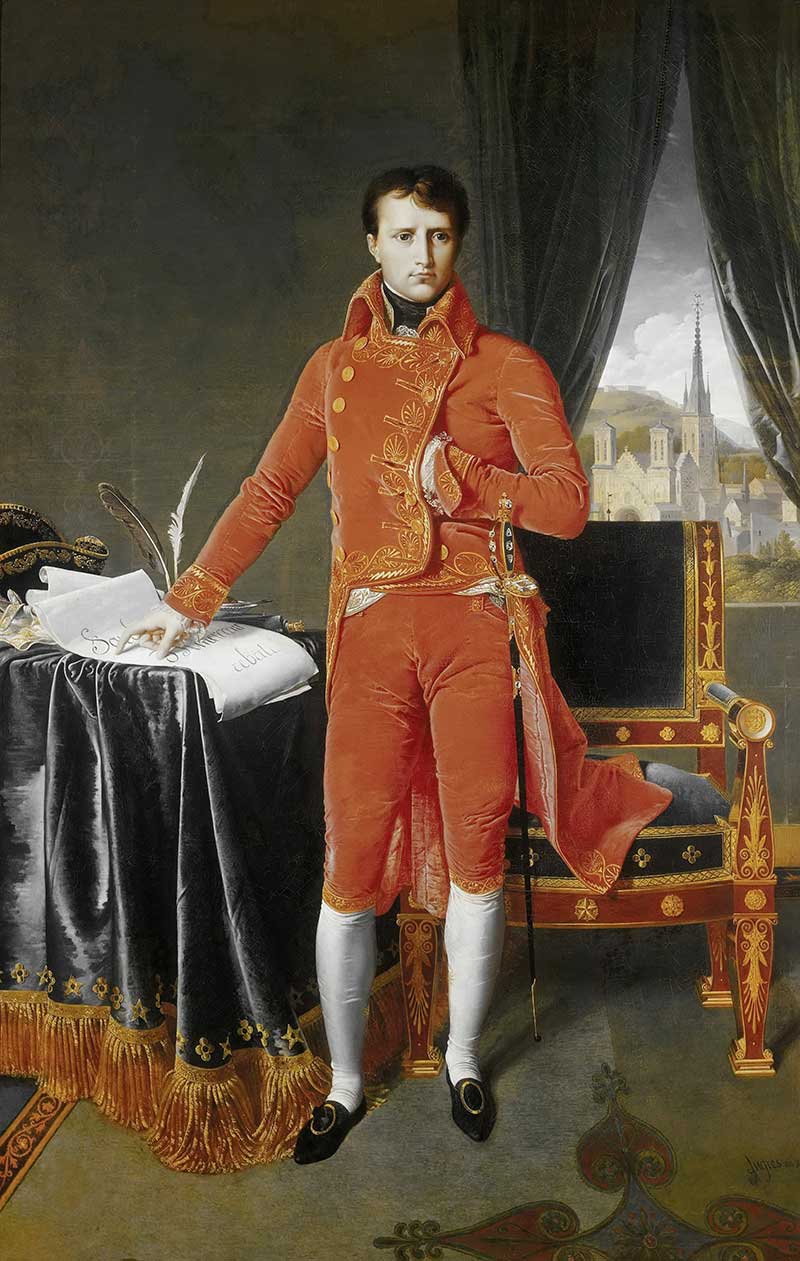 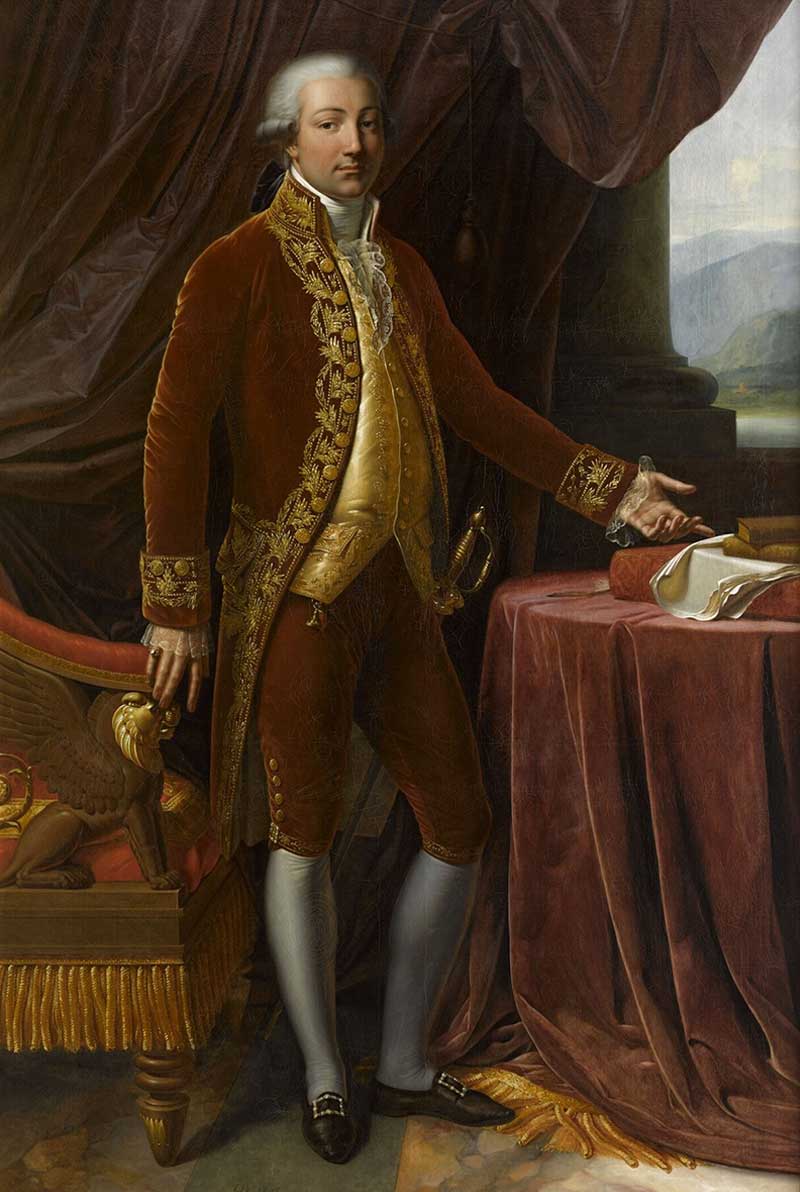 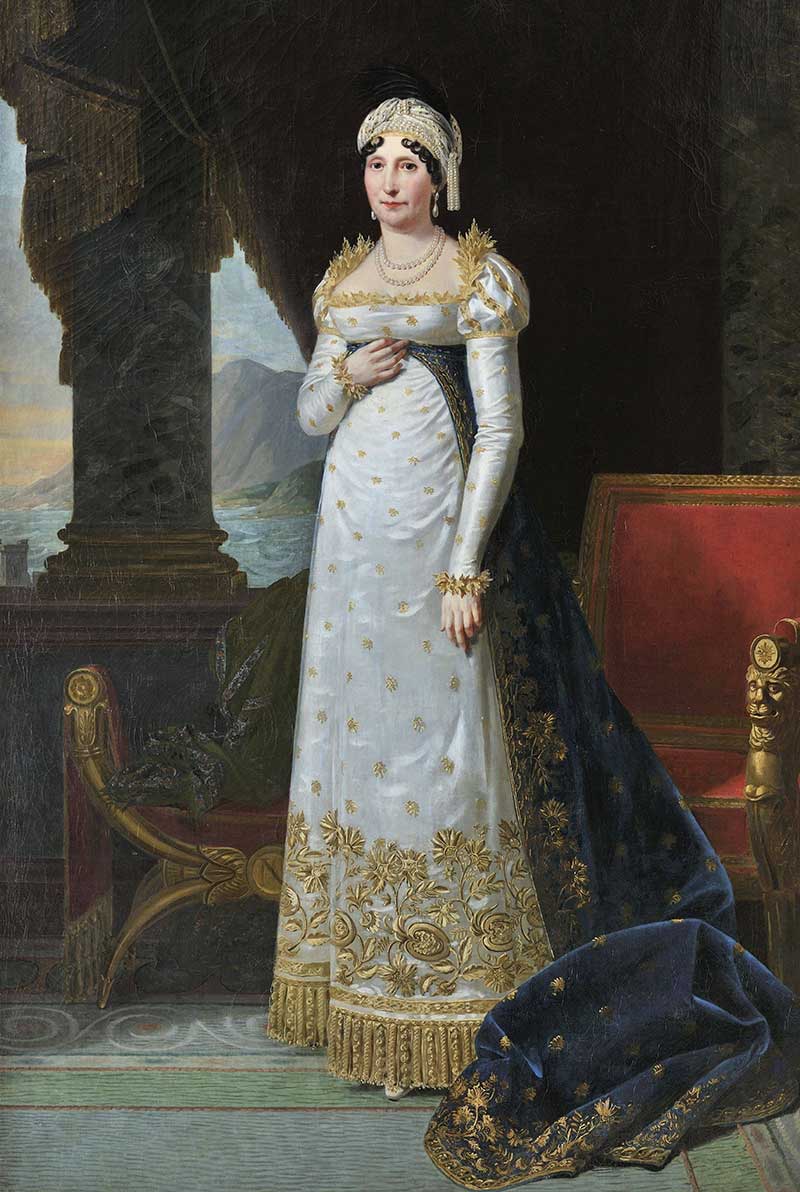 Born the fourth of nine children on the Island of Corsica, of Roman Catholic parents of Italian heritage on both sides, young Bonaparte grew to manhood living the life of minor nobility of modest means. He spoke and read Corsican and Italian, not learning French until the age of ten. He spoke French with a Corsican accent and never did learn to spell well in that language. He was a voracious reader and chose military training for his future calling. He graduated from military school in 1785, age 16, a lieutenant of artillery, and the first Corsican to graduate from the Ecole Militaire. Because of his skill with artillery and his support of the French Revolution, by the age of twenty-four Napoleon was promoted to brigadier general. 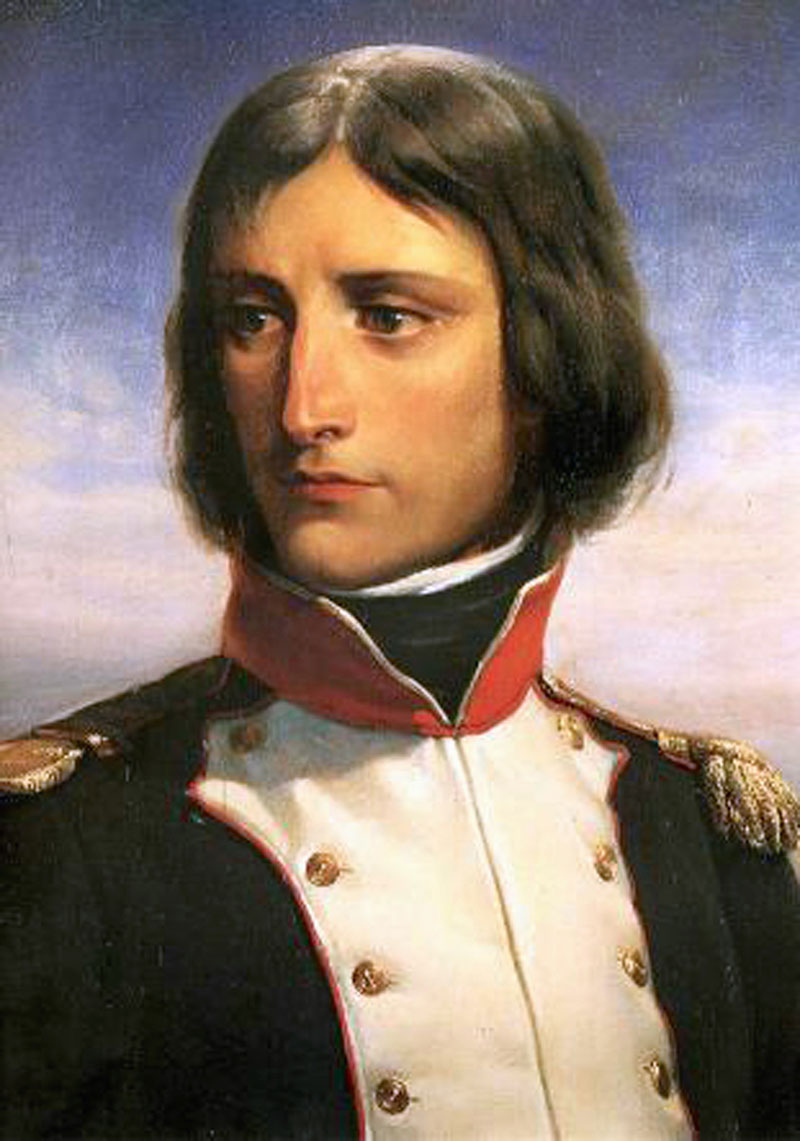 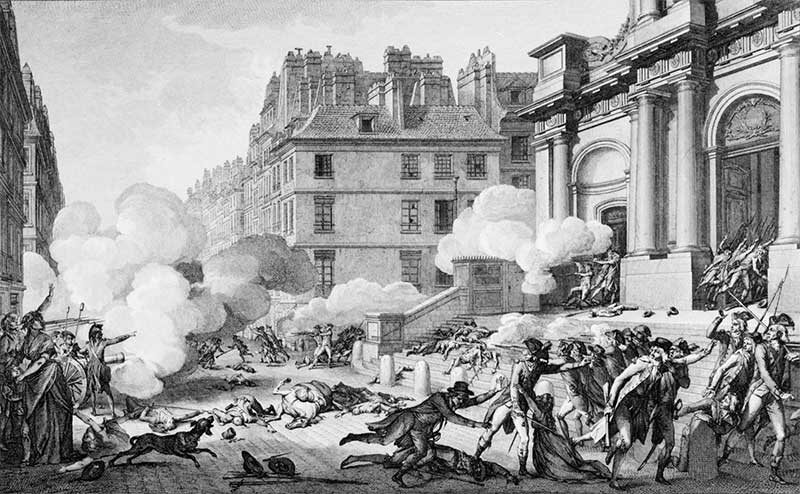 After demotion for refusing to take part in the massacre of the people of the Vendee region, Napoleon accepted the challenge of protecting the National Assembly from a royalist uprising in Paris. He cleared the streets with his artillery, killing more than 1,400 opponents of the Revolution. His defense of the Directory, the government of that moment, made him a hero and brought the reward of an army command. Napoleon won a succession of battles against the Piedmont and the Austrians, demonstrating a genius for maneuver and inflicting huge casualties on his opponents. In the course of his life he would lead French armies in sixty different battles, resulting not only in French political hegemony across Europe, but also his own name being mentioned in the same breath as Julius Caesar and Alexander the Great. It was an image he was not shy in promoting. 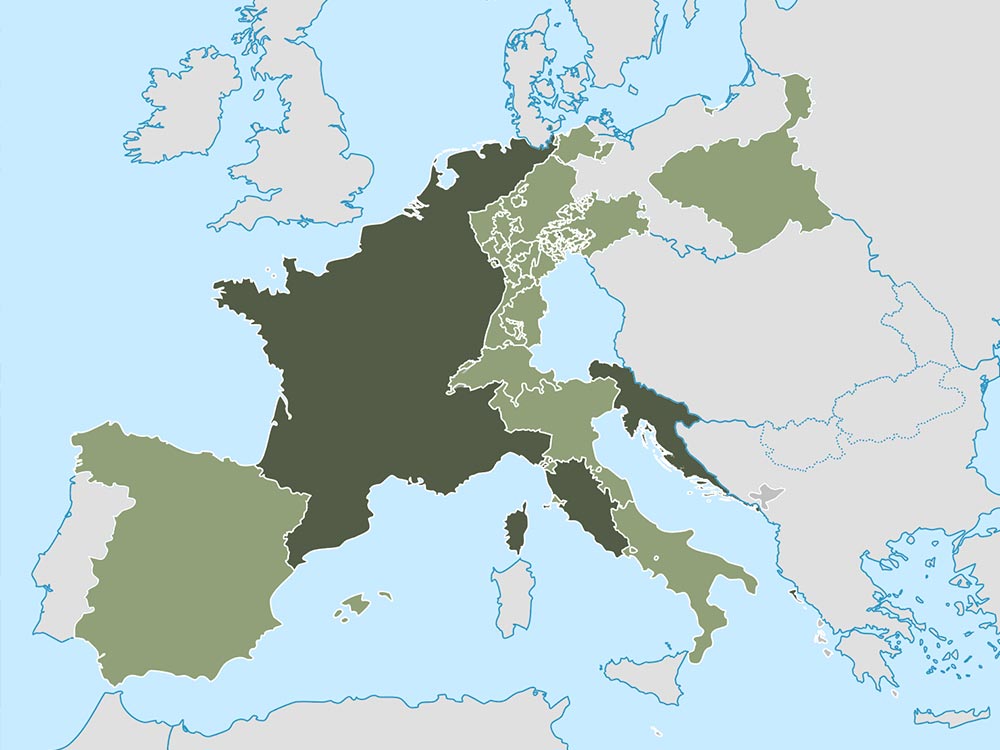 Napoleon took his army to Egypt, hoping to both challenge and defeat his arch-enemy, Great Britain. He defeated the Mamluk army of Egypt, losing only 29 men to Egypt’s 2,000. One goal never achieved by the greatest of all French generals was the defeat of the British Navy, which defended their empire and chased and defeated Napoleon’s naval forces around the globe. 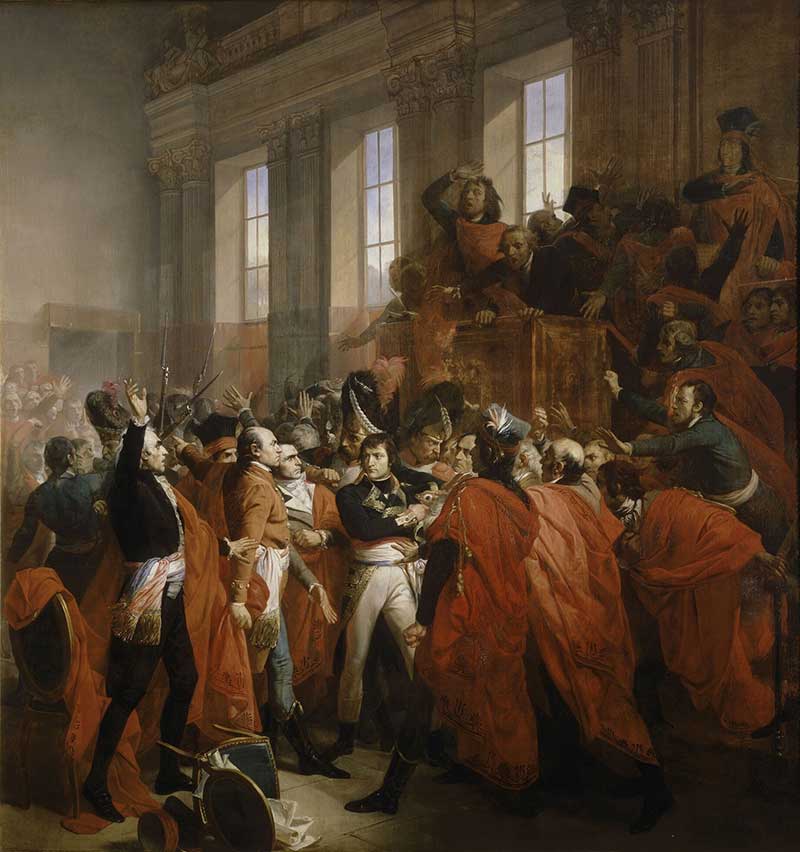 August 24, 1799 Napoleon left Egypt to return to France and overthrow the Directory by a coup d’etat. He declared himself “First Consul” and held an election to show his democratic and republican support of the Revolution. Somehow, he received twice as many votes as there were voters. He defeated the Austrians once again after several large battles and signed another short-lived peace treaty. Ever conscious of history, he placed a laurel crown on his head symbolizing a Roman victor and, in 1804 received a golden crown from Pope Pius VII, which he placed on his wife’s head. Likely tired of the Revolutionary excesses and fearful of the threat of total anarchy, the people acclaimed Napoleon as the Emperor of the French. 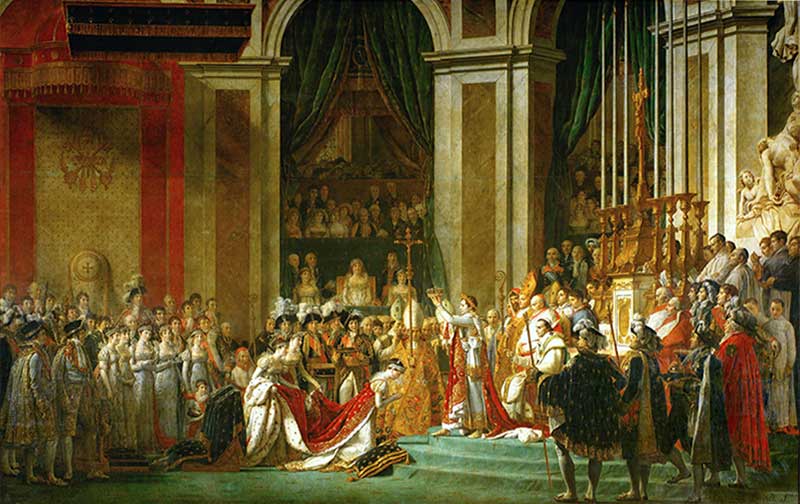 The coronation of Napoleon Bonaparte, Emperor of France, and his wife Empress Josephine, December 2, 1804 at Notre Dame Cathedral in Paris. Napoleon is shown wearing his laurel crown while crowning Josephine with a more traditional golden crown.

Conflict began again in 1803 when Britain, along with the rest of the “Third Coalition”, declared war against France. Napoleon organized an army of 200,000 men in seven corps with hundreds of artillery, to carry out his campaigns against Austria, Prussia, England, and Russia. He added a cavalry corps and recruited more infantry with Revolutionary fervor, to field a force over 350,000 strong. Nothing like it had ever been seen in Europe before.

The Battle of Austerlitz, also known as the Battle of the Three Emperors, was one of Napoleon’s many victories, where the French Empire defeated the Third Coalition

While Napoleon maneuvered his armies and defeated Austria and Russia, England continued to rule the oceans, finally whipping the French and allied Spanish fleets at Trafalgar. Britain would never be invaded—neither Napoleon nor Hitler (a hundred twenty years later), could cross that thirty-mile channel. After the destruction of the Allied army at Austerlitz in 1805, Napoleon turned against the Prussians, newly threatened by his seizing German states as a buffer between France and Prussia, the largest and most fearsome of the Germanies. In back-to-back victories over Prussia, the French Emperor captured 140,000 men and 2,000 cannon. He completed the establishment of “the Continental System”, with Napoleon as master. 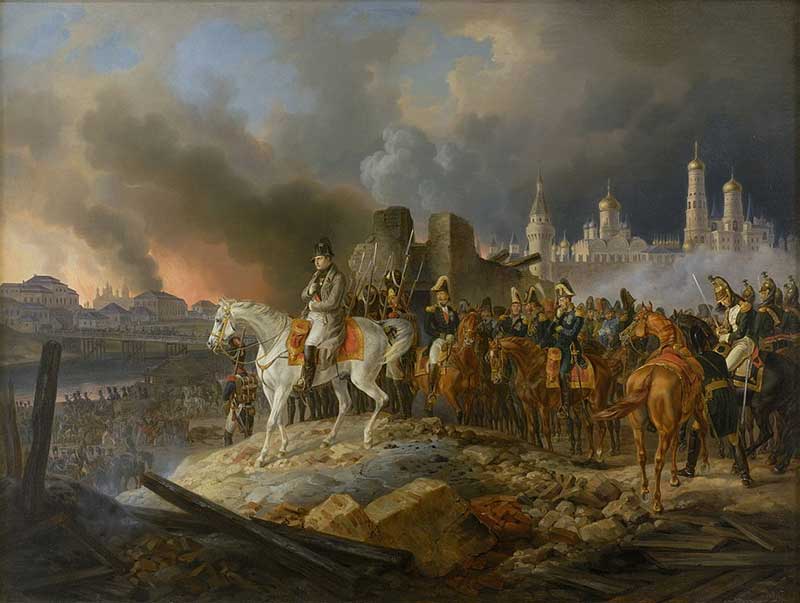 In 1808 Napoleon invaded Russia with 400,000 men and returned home four years later with less than 40,000. He had killed hundreds of thousands of Russians but was defeated by “General Winter”, and the tenacity of the Russians themselves. In the following “War of the Sixth Coalition”, the French emperor was finally brought to bay, having finally suffered defeat and seen the remnants of his army pushed to the edge of annihilation in France. His Marshals convinced him that he must abdicate, which document was finally signed on April 11, 1814. He had changed the map of Europe, ended the lives of millions, and changed the course of history. Napoleon was exiled to the Island of Elba, from which he escaped soon after to run amuck in France one more time. But that is another story. 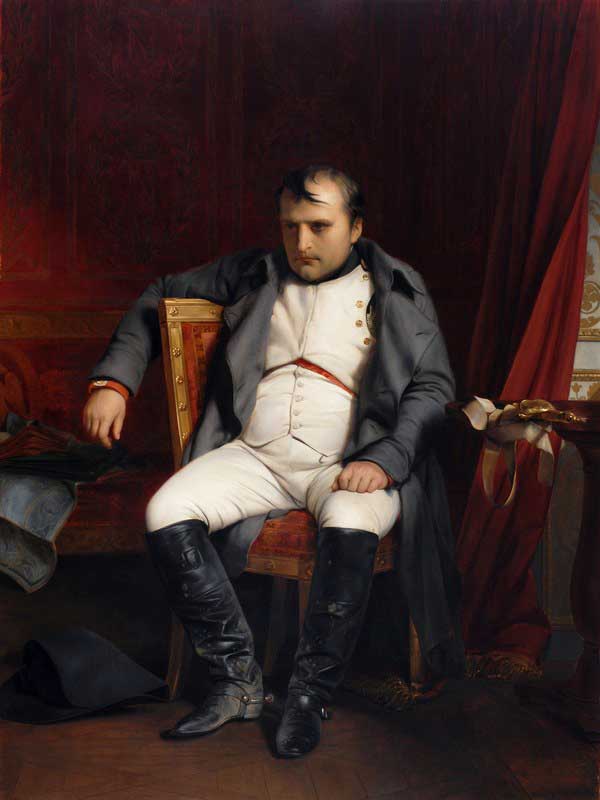 Napoleon after his abdication 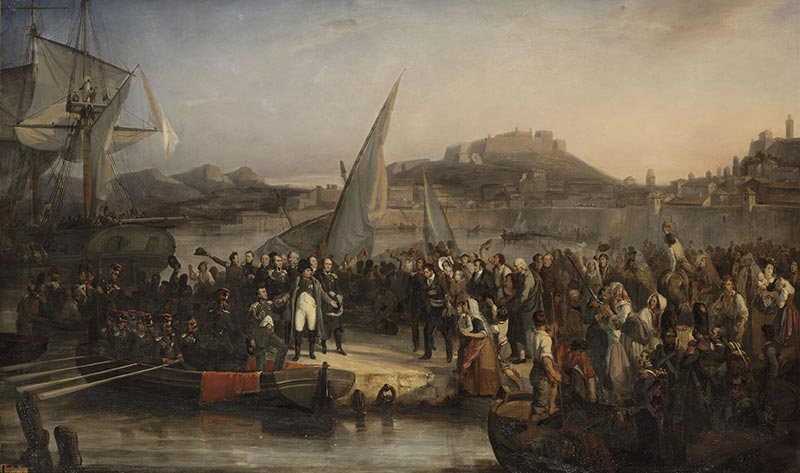 Napoleon departs the island of Elba in February of 1815