f you lived with your growing family in a rude, one-room cabin, perhaps rented, in the midst of a terrible economic depression, and the federal government offered you the opportunity to put a stake in the ground of a fertile, rolling prairie and you’d be given a multiple-acre plot for free, would you consider it? That is precisely what happened in 1893 in Oklahoma. The only catch was that a hundred thousand other people were lined up to do the same thing and it would be a race on horseback, wagons, trains, bicycles, and on foot, simultaneously, across the “Cherokee Strip” of some six million acres, with 40,000 homesteads available. If you participated, you would be known as a “Boomer.” If you snuck out to steal land before the official start, you were a “Sooner.” Between Boomer and Sooner, chaos would prevail. 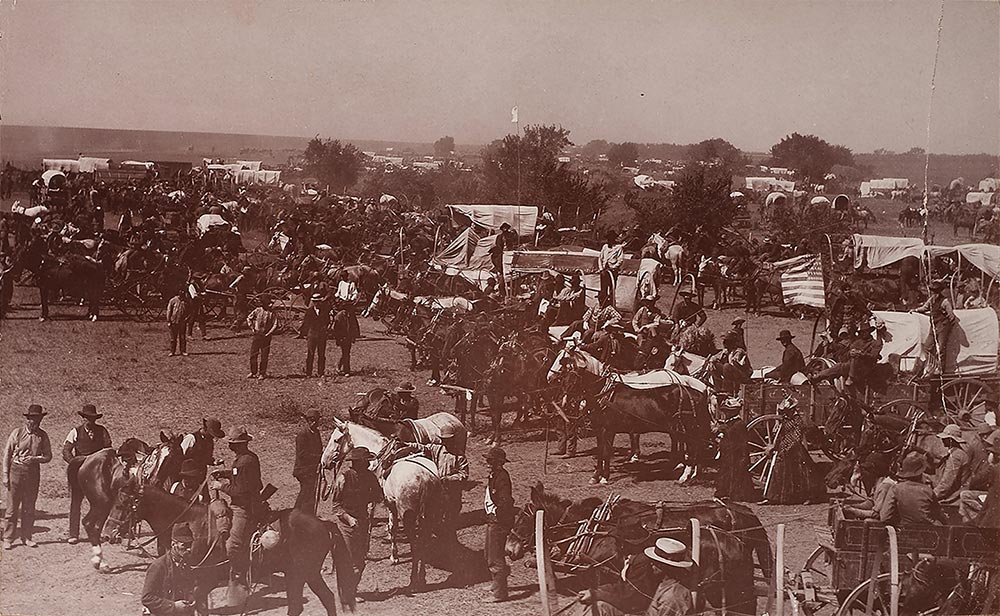 Like so many American stories, the Oklahoma Land rushes are embedded in historical contexts that date from earlier eras. In this case, from Native American treaties and relations from more than fifty years earlier. The State of Georgia had pursued the removal of the Cherokees from the early years of the century. In May of 1830, President Andrew Jackson signed the Indian Removal Act. 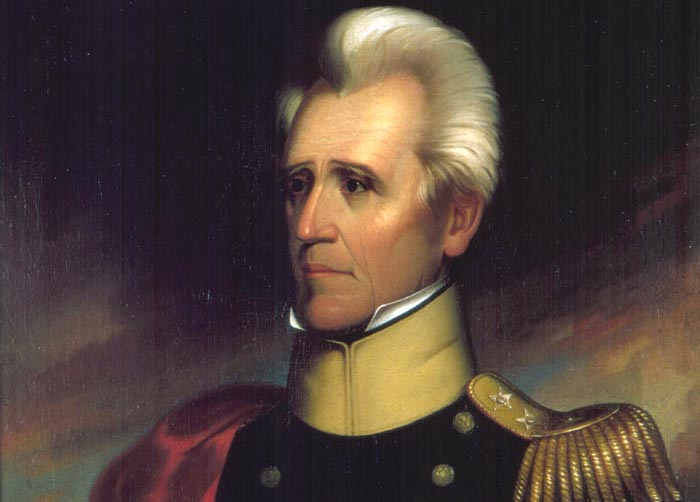 Through a series of byzantine negotiations, nullification of federal laws, Supreme Court rulings, divisions among the Cherokee leaders, and outright land theft, the Cherokee had finally met at their capitol at New Echota and signed the treaty that ended their sovereignty and attempts to retain their historic lands. They were given more than five million dollars and ordered to remove to new land given to them in what became known as “The Indian Territory,” which later became the state of Oklahoma. The treaty went into effect in March, 1836. Over the following three years, the Cherokee nation—which included people from Georgia, North and South Carolina, Alabama, Tennessee, and Texas—were removed to their new homes in the Territory. More than 17,000 Cherokee and their 2,000 black slaves travelled to the Territory. Estimates of fatalities from the removal vary from 4-6,000, although those numbers are contested by historians, in both directions. They were joined by the Choctaw, Creek, Chickasaw, and Seminole tribes in the massive forced removal from the Southern states. 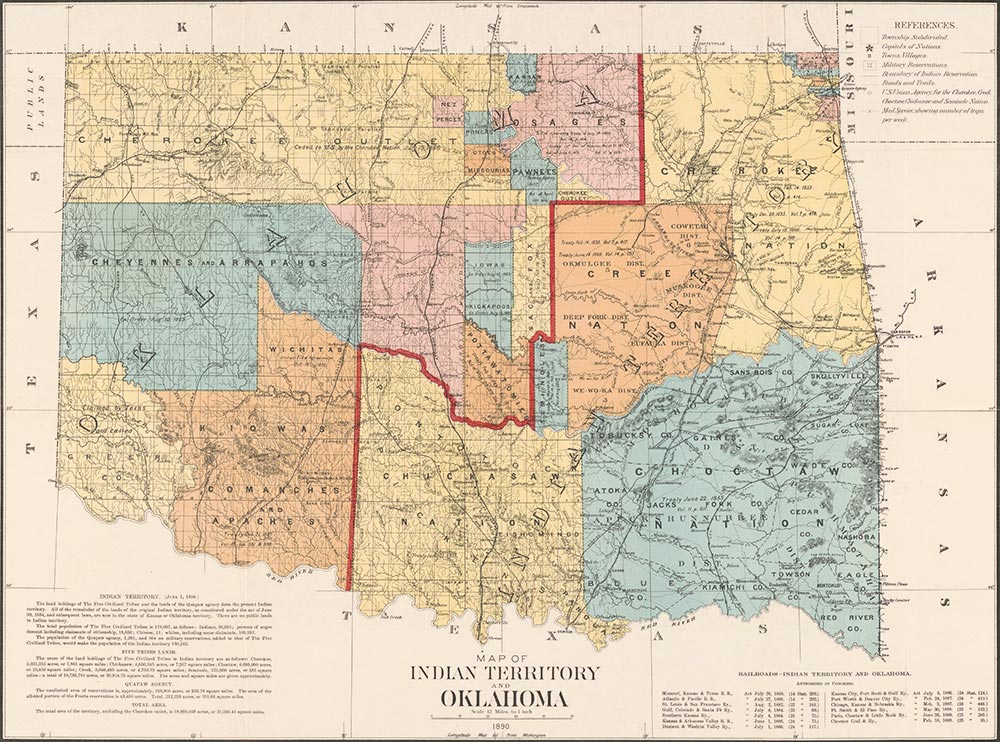 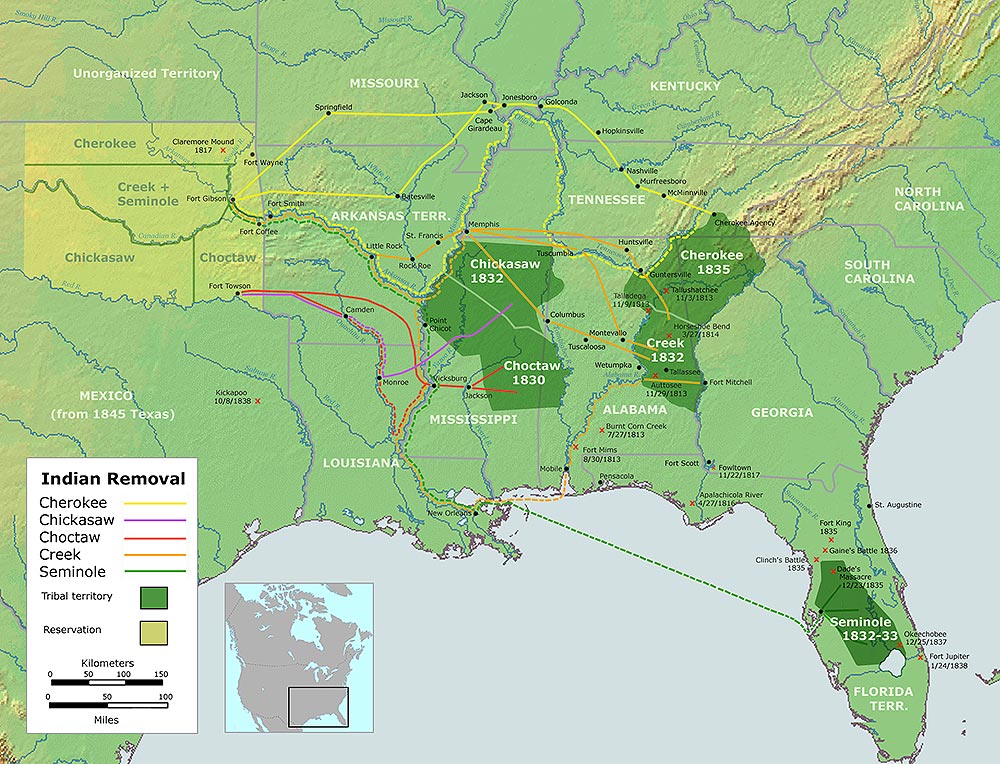 The series of forced relocations of Indians from the Southeastern U.S., collectively known as “The Trail of Tears” States, moved tribes west to areas designated as Indian Territory

Following the Civil War, intense pressure was placed on Congress by land speculators and railroads—often the same group—to offer land to the thousands and eventually, millions of people who wanted to move westward into the burgeoning prairies and the lands of the far west. The majority of Indians had sided with the Confederacy during the Civil War, and radical Congressmen considered them a conquered province, ripe for exploitation. From 1870 to 1879, thirty-three bills were introduced in Congress to open the Territories for settlement. Four out of five western cattle trails from Texas came through the Territories. The first land rush opened the Indian lands to eastern settlers following the “Indians Appropriations Act of 1889.” The Run of 1892 had opened the former Creek and Seminole reservations. They had been sent packing by the federal government to lands in Colorado during Reconstruction.

The 1893 Land Rush was the largest of the four sponsored by the government, this time across the Cherokee grazing lands of the northwest corner of the Territory. The tribe leased the land to cattle drovers, a lucrative deal, but Congress over-rode their possession with the new bills. President Grover Cleveland set the time for the run at precisely noon on September 16. The canon boomed (hence “Boomers”) and the race to take the land began. Photographs of the land rush show men on horseback and in wagons churning up the dust as they whipped their horses in a frenzy of land lust. Land-offices had been established in four towns and the United States Cavalry were scattered about to try and control the inevitable clashes that ensued. When men claimed the same land, or Sooners were already staking their claims, confusion and contusions flourished. 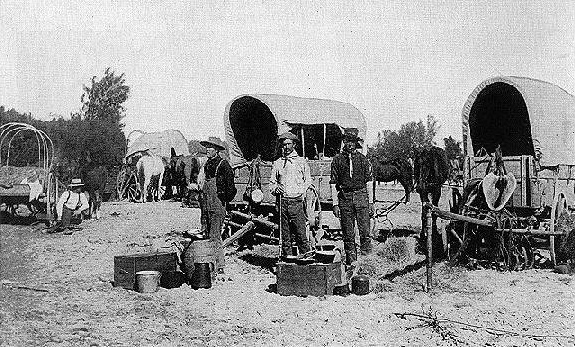 Settlers camp near Arkansas City and await the opening of the Cherokee Strip, September 1893 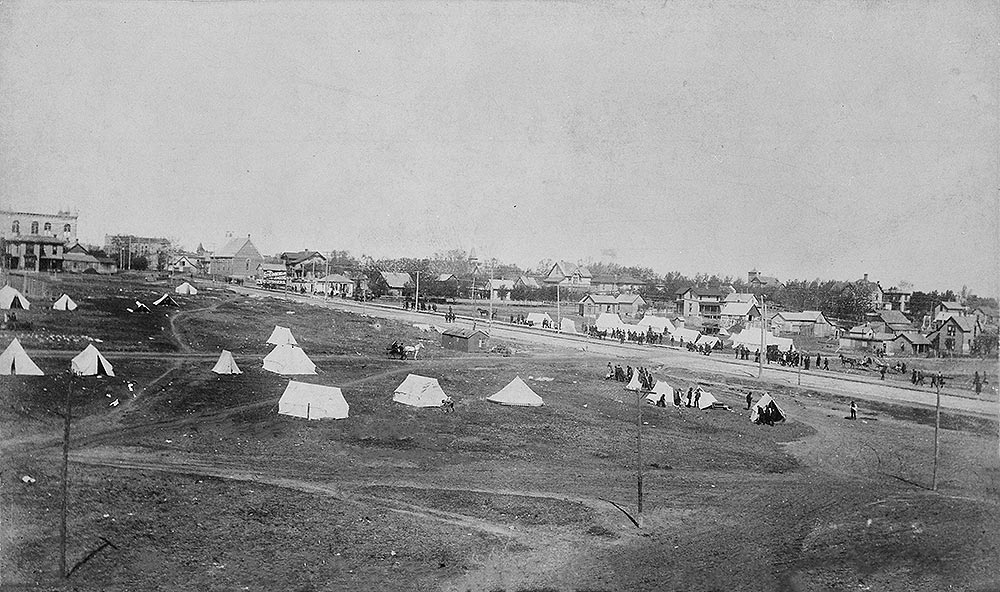 A Boomers camp is seen in Arkansas City, March 1, 1893 as settlers await the opening of the Cherokee Strip

One result was the overbuilding of towns by people with few resources to make a go at business in the midst of economic depression. Others discovered that their new land was not conducive to successful planting, and abandoned their claims. Other Boomers chose wisely, and established prosperous farms or businesses. New counties were established, although Oklahoma would not become a state until 1907. 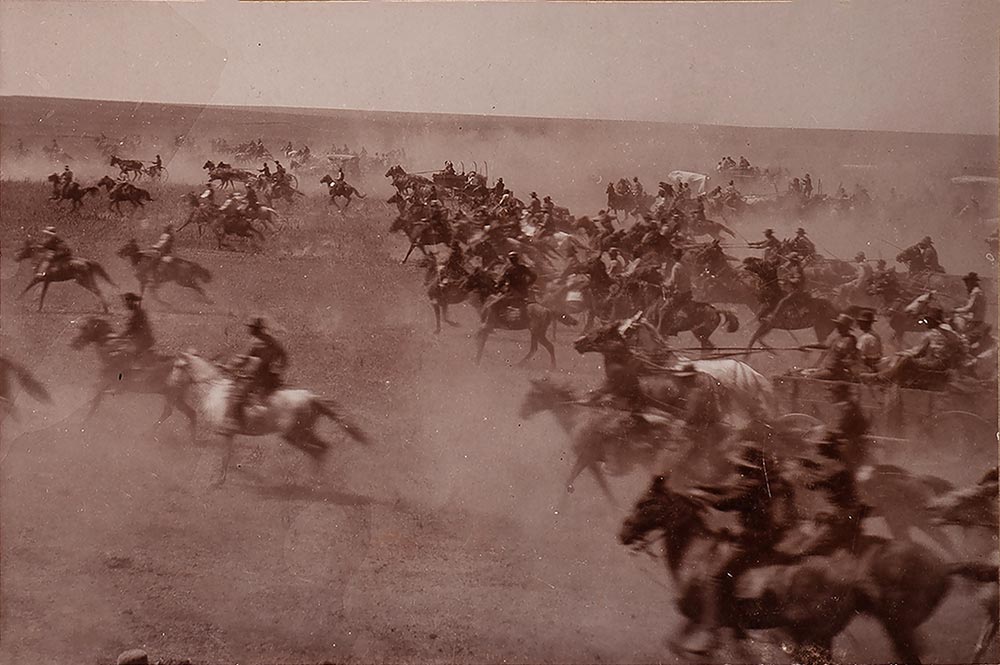 The race began at noon on September 16, 1893 as more than 100,000 people gathered on the border to rush in and claim their homestead within the “Cherokee Strip” between Kansas and Oklahoma Territory

Every state has a unique history, and Oklahoma is no exception. The “Five Civilized Tribes” were among the first to be sent en masse to new lands, promised reserves in perpetuity. The Territory, however, proved as little sacrosanct as their original homes, when land-hungry easterners and railroads prevailed upon their compliant Congressmen to open the vast spaces to immigration. Oklahoma’s subsequent history was dependent on races, the winners establishing farmsteads across the prairies. The losers wondering why treaties could be so easily nullified through political expediency and economic rapacity.