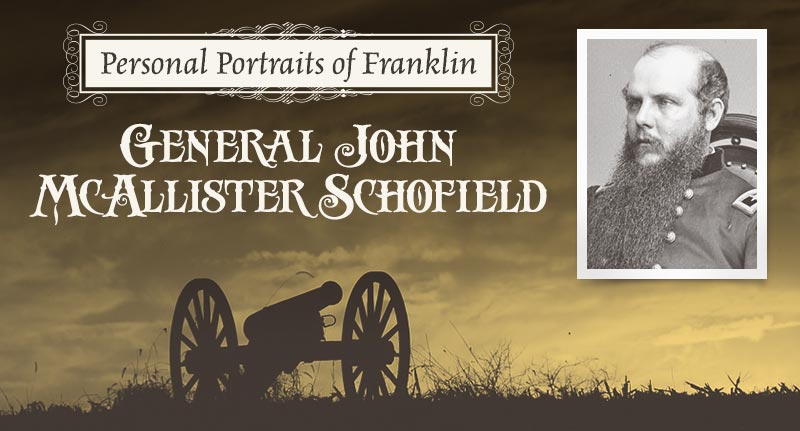 Western New Yorker and son and grandson of Baptist ministers, Schofield grew up in Illinois where he taught school briefly before attending the military academy at West Point. As providence would have it, his roommate was John Bell Hood. He served as a military instructor in Florida before the war and as a mustering officer in St. Louis when the war began. He served on the staff of General Nathaniel Lyons in the battle of Wilson’s Creek, Missouri, where Lyons was killed in action and Schofield was commended for “conspicuous gallantry,” and for which he would eventually receive the Medal of Honor, due to political connections. His entire military career would be filled with controversy over his decisions and leadership. In his following service in Missouri, pro-Union citizens criticized him in Washington D. C. and begged President Lincoln to sack him for not being tough enough on pro-Confederate citizens. His polished social skills and useful political connections in Illinois brought him only promotion.

Wiley Sword describes him as “a stocky, ruddy faced man with a decidedly dumpy appearance, and his short stature, long patriarchal beard, balding head, and beady squinting eyes made him appear comical, if somehow sinister.” General Sherman rated him slow and suggested he “leaves too much to others.” It did not appear that independent command would suit him at all. Independent command is what he got.

In 1864 the “bookish” Schofield assumed command of the Army of Ohio and joined Sherman’s forces in the Atlanta Campaign. Controversy followed him to Georgia. In the Utoy Creek operation, Sherman attached the XIV Corps to Schofield. Major General John Palmer, a professional politician and the commander of that Corps, refused to serve under Schofield and initiated a flurry of messages with Sherman. As Schofield moved toward the Confederate forces defending the railroad at Utoy Creek, Palmer refused to move. Finally, in frustration, Schofield threw a brigade of the Army of the Ohio at the southern line and was bloodily repulsed twice, thus ending the attempt to turn the rebels out. Sherman accepted Palmer’s resignation.

When Sherman turned most of his army toward the march east to Savannah, he sent Schofield’s troops to oppose Hood’s forces, moving north toward Nashville. In Columbia, Schofield’s men looted and burned as their General had his engineers fortify along the Duck River and settled in for “a warm time.” His superior in Nashville, General George H. Thomas expected him to clash with Hood and keep him clear of Nashville as long as possible. Schofield, not really a fighting general, thought caution the best policy and called for reinforcements. Hood had no intention of letting Schofield relax or avoid contact.

As the Union soldiers abandoned Columbia after being flanked and cut off from Franklin, Schofield’s men slipped past the somnambulant Confederates at Spring Hill, with the intention of continuing right on through Franklin to the safety of the magnificent defenses of Nashville. With the bridges across the Harpeth in disrepair, Schofield stopped in Franklin to fix the bridges and fortify quickly in case the Confederates showed up. They showed up. All the political connections, hesitant movements, and lack of confidence of the Union commander would be worth nothing, for the fight belonged to the privates, NCOs, and line officers of the Midwestern boys in blue.