“Yet you do not know what your life will be like tomorrow. You are just a vapor that appears for a little while and then vanishes away.” —James 4:14

ccording to Professor Benjamin Cloyd in his book Haunted by Atrocity: Civil War Prisons in American Memory, about 410,000 Confederate and Union soldiers were captured during the War Between the States, and about 56,000 died in confinement. Usually, no stigma was attached to giving oneself up to the enemy, unless a cowardly commanding officer capitulated prematurely. After the common practice of paroling men captured in battle ceased, and the prisoner exchange cartel came to an end by order of General Grant, the prisoners of both sides were incarcerated long-term in POW camps across the North and South. For those who survived the horrible conditions of the camps, the end of the war finally brought opportunity to return home. Multiple thousands of those who had endured the wretched, unhealthy, and dangerous conditions of the camps, carried disease and extreme physical debility with them, hoping to recover at home. The little-known story of Union ex-POWs’ return after the war provided the occasion for one of the truly horrendous and fatal “accidents” of the century, the worst maritime tragedy in American history, known as the Sultana Disaster. 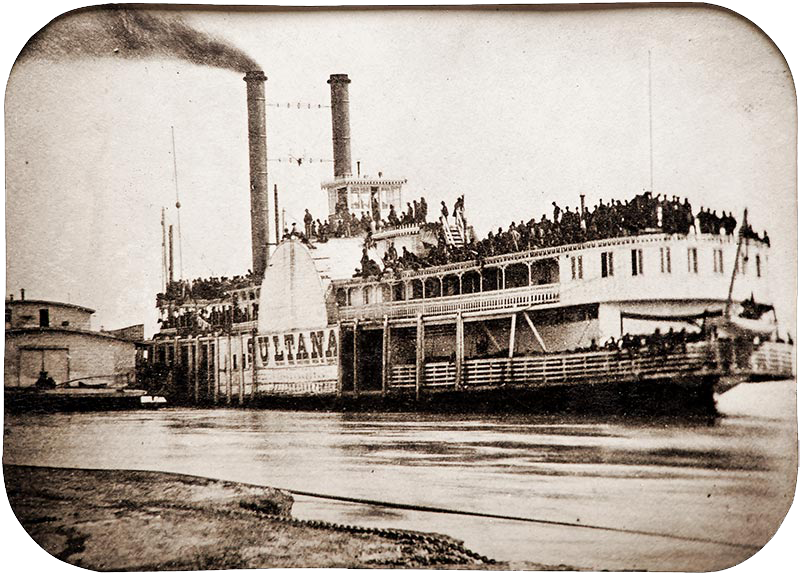 A photograph of the Sultana taken at Helena, Arkansas on April 26, 1865, the day before the disaster, showing the decks grossly overcrowded with paroled prisoners

The sidewheel steamboat Sultana, constructed in the classic “wedding cake” design, was built in Cincinnati, Ohio in 1863 to haul cotton stolen from the Confederacy in the lower Mississippi River. She plied the river between St. Louis and New Orleans for two years, frequently docking in Vicksburg, Mississippi along the way. She had a capacity of 376 passengers and typically carried a crew of about 85. Although 269 feet long and 42 feet wide at the beam, she only drew seven feet of water. Four “fire-tube” boilers propelled the two large paddle wheels, which drove the layered and highly flammable light wood-constructed ship. 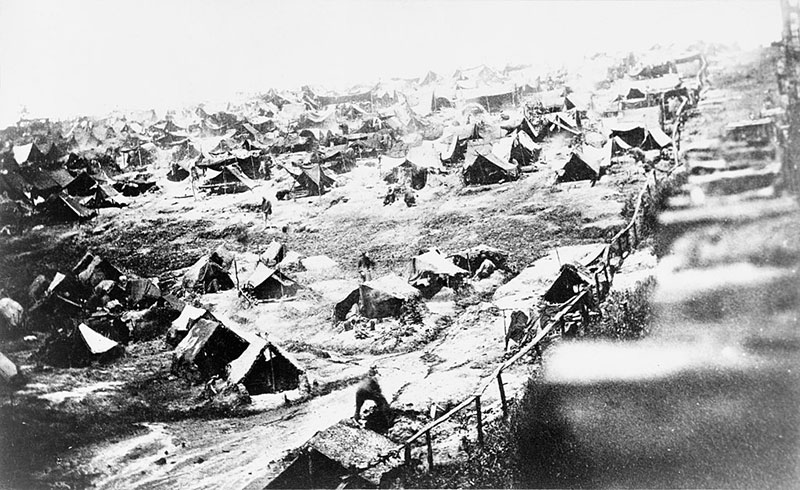 A photograph of the notorious Andersonville Prison Camp, taken August 17, 1864, showing the living conditions of the prisoners

On the day after the assassination of President Lincoln, Captain James Mason of the Sultana tied up at the dock at Vicksburg on his way to spread the news south. Captain Reuben Hatch, the chief quartermaster of the Union forces in that city and a man “with a long history of incompetence and corruption” (the quartermaster department was full of men like him), made a deal with the ship captain to transport Union soldiers at $2.75 per enlisted and $8.00 per officer to the North. They were men who survived Catawba and Andersonville Prisons, many of them sick or weak from starvation. The kickback bribe was too tempting to pass up and the two Captains loaded about 1,900 paroled prisoners from the Midwest, Kentucky, Tennessee, and West Virginia, along with 22 guards and 70 paying cabin passengers. With the 80 or so crew members, a ship rated for just over 400 people was crammed with more than 2,100 people, plus 120 tons of sugar. The sagging decks had to be braced. 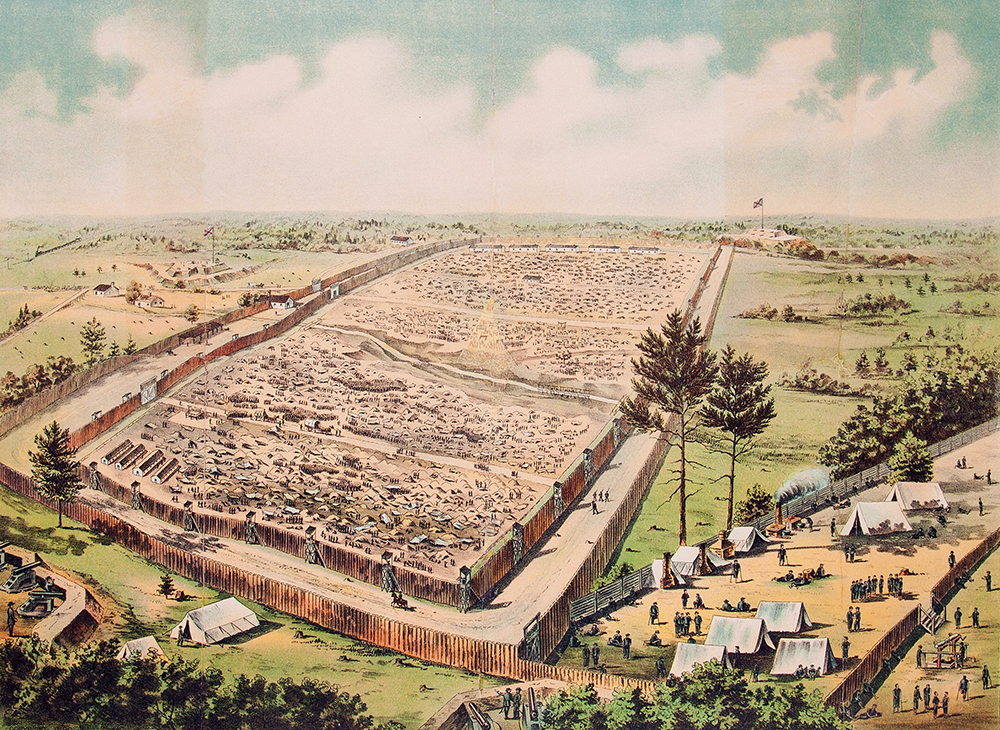 Bird’s eye view of Andersonville Prison from the south-east

For two days the Sultana fought against the spring-flooded Mississippi River that had outrun its banks more than three miles! At 2:00am on April 27, just seven miles north of Memphis, the ship’s boilers burst, sending scalding water into the hundreds of passengers on deck and below. The explosion blew out the pilot house and the whole ship became an uncontrolled floating inferno as the smoke stacks crashed down on the helpless victims below. Whole groups of men who had endured battle, prison, disease, and starvation clung to each other and drowned or succumbed to hypothermia by the hundreds in the raging Mississippi. Rescue boats began arriving a half hour after the explosions, but the dark swirling waters carried off most of the passengers, forever. The smoking ruins of the Sultana sank seven hours later near modern day Marion, Arkansas. 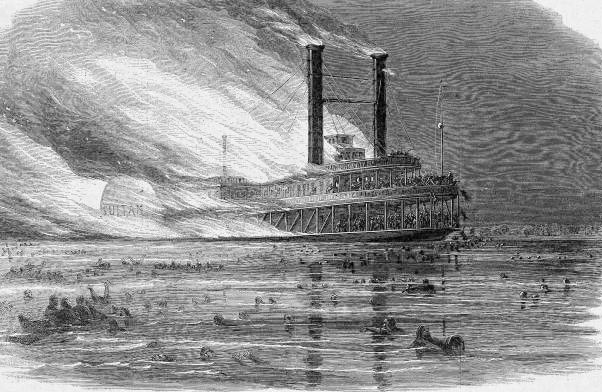 An artist’s rendering of the Sultana disaster, showing the plumes of smoke, burning shell, and scores of survivors fighting for life, from the popular publication of the day, Harper’s Weekly

Miraculously, about 900 passengers survived, due to quick-thinking people on the shore, including Confederate soldiers, who would have been shooting those passengers just a week or two before. For decades afterward, survivors held reunions until the last one, Private Charles Eldridge of the 3rd Tennessee Cavalry, died at home during World War II, in 1941, age 96. The subsequent inquest into the tragedy cited careening because of overload, super-heated poor quality metals in the boilers, an unrepaired leak, and the silting caused by using the muddy water of the river in the boilers. The man responsible for the whole affair had embezzled thousands of dollars throughout the war, but was previously, and on this occasion, protected by Illinois political connections in the Lincoln administration and by General Grant. The Captain of the ship was killed in the explosion, and the men who sent the soldiers from the parole camp to the ship were accused and convicted, but exonerated by the Judge Advocate General’s Office. No one was ever held accountable for the worst maritime disaster in American history. 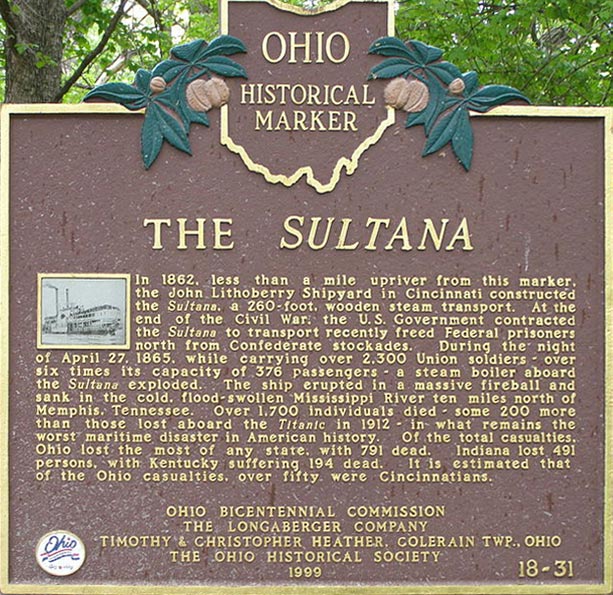 The Sultana was found in 1982 by Memphis Attorney Jerry Potter. It was buried thirty-two feet under a soybean field in Arkansas, miles from the ever-changing Mississippi River. There are memorial markers to the men who perished in the Sultana in Memphis (TN), Muncie (IN), Vicksburg (MS), Cincinnati (OH), Knoxville (TN), Hillsdale (MI), and Mansfield (OH). Unlike the Titanic, no one has tried to write biographies of the passengers, made romantic movies, or written hundreds of books about the tragedy; those boys in blue are just more casualty statistics from the War Between the States.