The Battle of Britain Begins, 1940

“Some trust in chariots and some in horses, but we trust in the name of the LORD our God.” —Psalm 20:7

n that immortal address to Parliament in June of 1940, Winston Churchill defined the stakes of a battle, one of the few in history named a month before it began:

“What General Weygand called the Battle of France is over. I expect that the battle of Britain is about to begin. Upon this battle depends the survival of Christian civilization. Upon it depends our own British life and the long continuity of our institutions and our Empire. The whole fury and might of the enemy must very soon be turned on us. Hitler knows that he will have to break us in this island or lose the war. If we can stand up to him, all Europe may be free and the life of the world may move forward into broad, sunlit uplands. But if we fail, then the whole world, including the United States, including all that we have known and cared for, will sink into the abyss of a new Dark Age made more sinister, and perhaps more protracted, by the lights of a perverted science. Let us therefore brace ourselves to our duties, and so bear ourselves that, if the British Empire and its Commonwealth last for a thousand years, men will still say, ‘This was their finest hour.’” 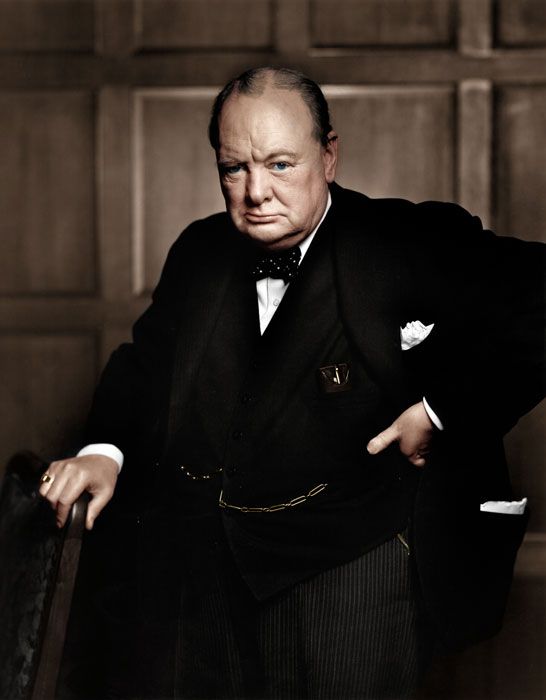 Adolph Hitler, the leader of the German “Third Reich” had hoped the British would make a separate peace, so the Germans could get on with an invasion of Russia, Hitler’s fellow Socialist ally, but ultimately his greatest target of conquest. Churchill steeled the nerve of the British Empire to fight to the last round. The previously undefeated and unstoppable German army poised on the shores of France for the leap across the channel to the United Kingdom. But Germany did not possess the naval capability to invade England, and devised a strategy to bomb the nation into negotiation or submission. 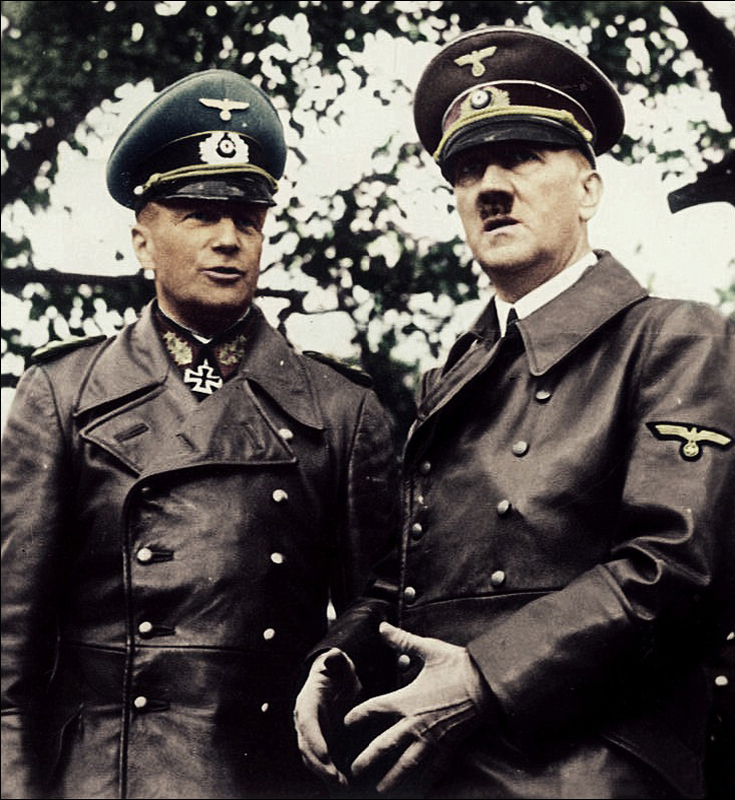 The British consider July 10 the beginning of the Battle of Britain; it would be the first major battle in history fought exclusively between air forces — The German Luftwaffe vs. Britain’s Royal Air Force (RAF). To destroy the RAF was the first order of business for the German air offensive. On paper, the odds favored the Luftwaffe. They had more than 1,400 experienced fighter pilots, already blooded in the Spanish Civil War and the fighting across Poland and France. The RAF fighter pilots were less trained and most of the 3,000 pilots in operational squadrons served in the bombers attacking Germany. About six hundred RAF pilots were from Commonwealth countries, South Africa, Rhodesia, Canada, and Australia for instance, as well as survivors from the Polish and Czech air forces. The German high command estimated it would take four weeks to destroy Fighter Command and bomb the airfields, roads and airplane factories to the point of total air superiority. Hitler forbade terror bombing of civilian populations except as a last resort. 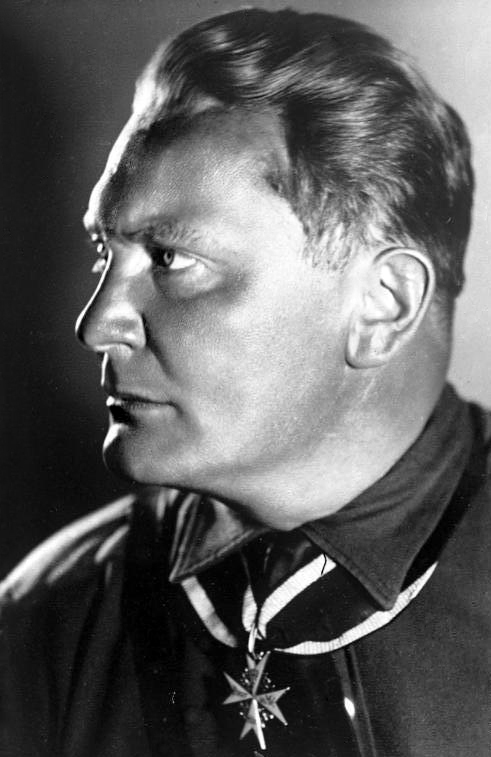 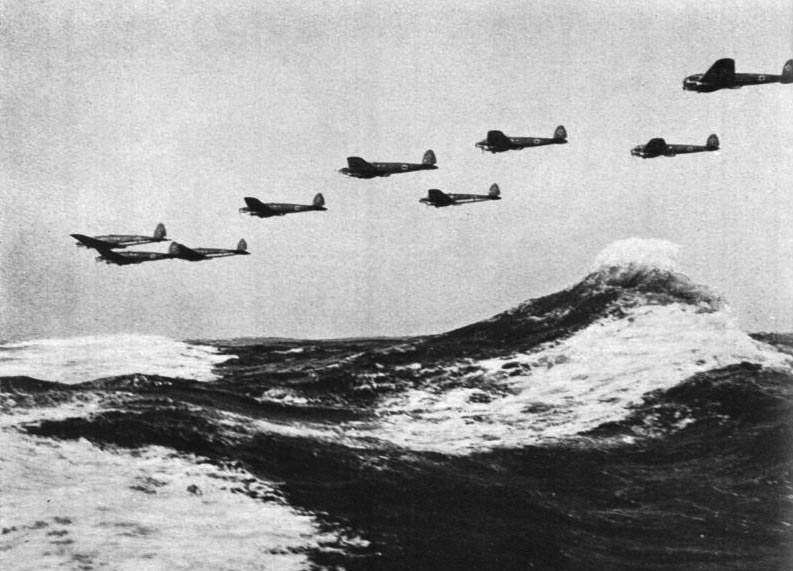 German Heinkel He 111 bombers over the English Channel, 1940 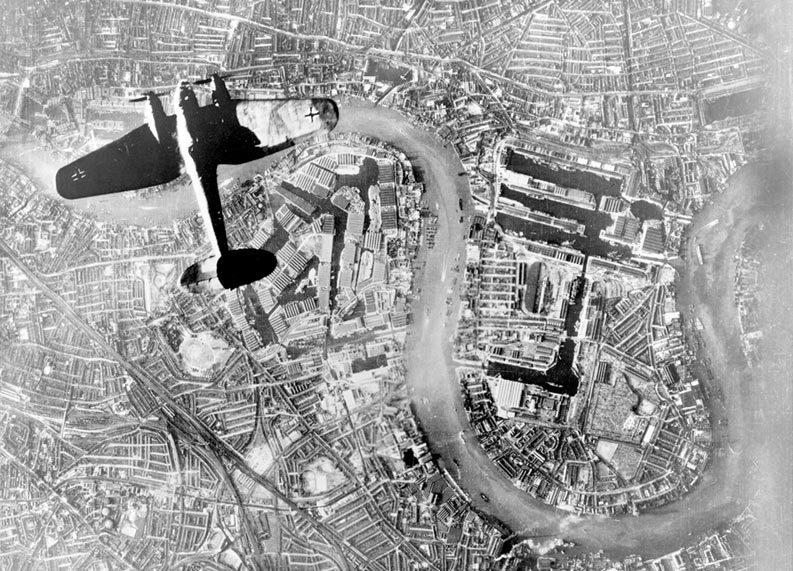 Heinkel He 111 bomber over South London and Wapping, September, 1940

The young men of the RAF went into the skies every day and night to shoot down bombers and fighters, losing a large percentage of their own forces in the process. They fought over the channel, the cities, the airfields, and the radar installations. The “Blitz” campaign against the cities began in earnest on August 1 and lasted till the end. The inspiring story of the Battle of Britain should not be forgotten, though it may seem the Christian civilization that seemed to be teetering at that time, remains in jeopardy in different ways today. 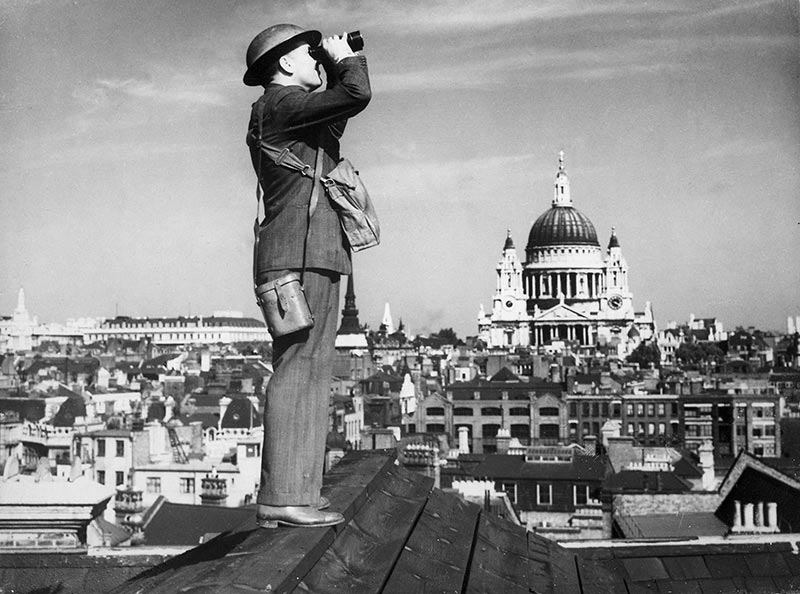 An Observer Corps spotter scans the skies of London

The Battle of Britain lasted until October 31, 1940, the people having witnessed huge air casualties on both sides, and the resort to terror bombing which killed or injured about 35,000 civilians. Churchill’s adamant refusal to give up heartened the people, unifying the defiance of the nation against Hitler’s Germany. And they did it alone, buying time and heartening the Allies to bring victory in 1945. Early battles and losses can be deceptive in regard to significance when put against a fighting spirit and will to win out. By God’s providence, Britain did just that. 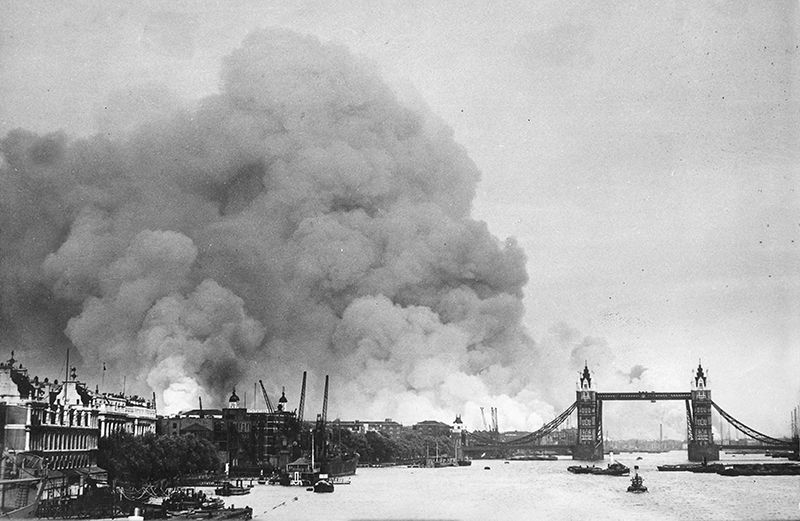 View along the Thames River in London as smoke rises from the London docks after an air raid during the Blitz, September 7, 1940