Why History is the Most Important Subject You Teach 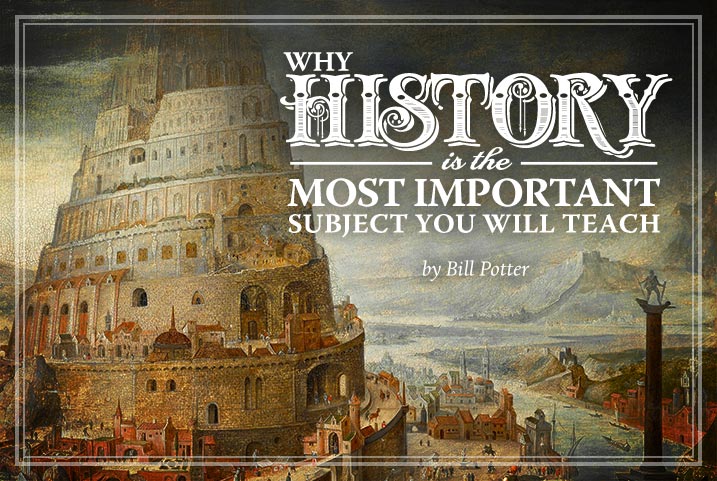 Historian David McCullough suggested that trying to understand the future without learning from the past is like trying to plant cut flowers. All our knowledge, our beliefs, our world-view, our identity, and those of the generations to come are rooted in the verities of history, which are based, in turn, on the infallible and inerrant historical truths of the revealed Word of God. Without history—religion and philosophy, the arts and sciences, mathematics, language, music and literature have no meaning. Pulitzer Prize-winning historian Douglas Southall Freeman rightly observed that “history is the great lamp that illumines every other study; without it, we grope in the dark.” Every person, event, and nation is a product of the past and we cannot escape that fact. Whenever we talk about history, “we are dealing with the past, present, and future” (Rushdoony).

Despite the above facts, schools continue to eliminate and downgrade their history courses, opting for social experimentation on behalf of political agendas, gender studies, and the redefinition of historical meaning. Teachers learn to toe the line on historical interpretations that meet the government dictates, which typically are also reflected in the ideology of their college professors. While there are still plenty of school history books, “history is manipulated. . . they just remove the facts that don’t make their bosses look good” (Paul Rosenburg). The classic illustration of this point comes from the George Orwell novel 1984. Orwell’s dark story concerns one Winston, who works in the ministry of truth, cutting out references from books and newspapers of people who had fallen out of favor and were thus made non-persons. He doctors the photos as if the eliminated characters never existed. Any historic reference to them is excised and sent down the “memory hole” to the furnace below the ministry. Written as a critique of what actually occurred in the Soviet Union, Orwell unwittingly anticipated the revisionism that would become standard fare about future history writing in the United States.

For some historians, the past could not be more irrelevant to the study of history! My favorite quote in this regard came from humorist P.J. O’Rourke’s citing of a college student who told him “our teacher believes that the best way to learn world history is to start at the present and move forward. He says this allows us to rid historicality of western-hegemonized false narratives in male gender perspectives [!!!]” –planting cut flowers indeed! That philosophy was embodied in the Rev. Jesse Jackson’s leading the chants at Stanford, “hey, hey, ho, ho, Western Civ has got to go!” The students meant the required course, he meant it literally.

Our anonymous world history professor was not the first to pursue this meaningless folly. In fact, some of his predecessors brought about the deaths of millions of people with such an attempt to deny God’s creation of time, history, and meaning on a national scale. In the third century B.C. (now called BCE—Before the Common Era—a not too subtle attempt by historians to eliminate the advent of Jesus Christ as the central point of all history, from which our dates have been measured for centuries) the Chinese emperor Chao Cheng, who called himself Shi Huangdi at age 13,“The First August Emperor,” decided to begin the history of China over again beginning with his reign. In an attempt to erase the past he ordered all the history books burned. This was several centuries before the invention of paper; books were written on what looked like wooden venetian blinds sown together. The men who wrote the books, the scholars, had to be erased from memory as well, so they were rounded up and buried alive. Years later, the event was deemed the fengshu kengru, the “burning of the books and burial of the scholars.” Of course after his reign, the inescapable reality of the past returned to scholarly exploration, though a bit too late for the previous historians to appreciate.

In modern times, the Khmer Rouge, the communist revolutionaries of Cambodia in the 1970s and following, tried to begin history from the day of their ascendancy and re-designated 1976 as year 1. In the course of “reeducating” the masses and eliminating the “bourgeoisie,” the previous government, and everyone tainted by contact with Europeans and Americans, their leader Pol Pot (affectionately known as “the one with the gun”) began history over again by murdering about two million Cambodians. Eventually, of course, the Khmer Rouge were ousted from power and chased into the hills, and history continued in linear form, with the Khmer Rouge added to the ideological and literal ash heap of God’s enemies.

There are a number of good reasons for planting the knowledge of the past in the minds of the current generation. Because history is the study of the providences of God and His work in the past to expand Christ’s kingdom, to destroy those of His enemies, and direct history toward the ultimate triumph of His plans, it is of self-evident value to the Christian. John Calvin rightly proclaimed that “history is the theater of God’s glory.” In the Old Testament, God commanded His people to rehearse the stories of deliverance and provision every year so each generation would remember His mighty acts. They even sang those stories in poetry and song as in the “Great Hallel,” of Psalm 136. When they failed to remember their history and deliverances, and began worshiping the gods of the heathen, God brought about their defeat, capture and enslavement.

The writer of Hebrews in chapter 11 cites the “great cloud of witnesses” as historic examples of faith and faithful recipients of God’s sovereign grace. And so are the Christian martyrs of history, like the Christians under Roman persecution, the Scottish Covenanters of the 17th Century, the Huguenots of France and many others who sacrificed all for Jesus Christ and His Church. They are an example and an encouragement to us in the midst of our own generations and troubles. We ought to see it as our duty to study the past to see God’s hand and provision in our own lifetimes as continuity with the believers of the past.

American Christians have long been faithful to learn their history. Noah Webster suggested that “every child in America should be acquainted with his own country . . . as soon as he opens his lips he should rehearse the history of his own country—he should lisp the praises of liberty and of those illustrious heroes and statesmen who have wrought a revolution in his favor.” And so we have done through the centuries and kept our liberty. Those evidences of God’s grace, however, require regular teaching, for those forces that hate the nation of the founders are alive and well and ensconced in schools and media institutions upon every hand. They constantly revise the past to demean and destroy the memory of those “dead white males” who created a “republic of suffering and slavery.” The truths of the past must be protected and passed on in the midst of the war for the minds of the current generation.

We ought not overlook the evils of the past but use the Word of God as our standard of judgment and not the twisted reasoning of men with modern political and social agendas based on feelings, irrational humanism, or materialistic paganism. With God’s standards in our minds, we can see the wisdom of the ancient Roman historian Livy who recommended the study of history as “the best medicine for a sick mind; for in history you have a record of human experience plainly set out for all to see; and in that record you can find for yourself and your country both examples and warnings; fine things to take as models, base things, rotten through and through, to avoid.”

There are many practical benefits to the study of history as well. One of the few things I would agree with distinguished historian Arthur Schlesinger, Jr. on is, why study history?: “first of all it’s a lot of fun.” It is especially so when you visit the places where “history was made.” There is a certain thrill to stand on the battlefields where men sacrificed all in defense of their homes or for a noble cause. It is enjoyable to view the material culture in a museum of the past; we connect with our own ancestors when we see the artifacts of their lives. We get a sense of continuity with the past, especially when we think of our place in the Kingdom of God, a kingdom that has existed from the first family of history and will exist to the end of time.

There is a sense of the usefulness of the study of history when we see the follies of the past and can warn others of the pitfalls of reproducing those errors. Human nature being what it is, sinful and fallen, such warnings often fall on deaf ears. As cartoonist Torb modified an old proverb—“those who don’t study history are doomed to repeat it. Yet those who do study history are doomed to stand by helplessly while everyone else repeats it.” Nonetheless, we can instruct our own families and thus assist their understanding of the times, and travel in directions that conform to the Will of God.

The beloved Scottish preacher of the 18th Century, John Brown of Haddington, left a sharp warning to us as we seek the truths of the past:

Often we read history as atheists or Deists, rather than as Christians. To read events without observing the hand of God in them is to read as atheists. To read and not observe how all the events conduce to carry on the work of redemption, is to read as Deists.

So teach history to others with the knowledge that it pleases God that we see his grace and mercy, and lovingkindness in the past, the building of his Kingdom through time, and that all other learning resides within the precincts of the God-ordained past.