Fidel Castro Sworn in as President of Cuba, 1959

Fidel Castro Sworn in as President of Cuba,
February 16, 1959

l Comandante ruled supreme for 49 years as Prime Minister or President of Cuba and First Secretary of the Communist Party. Under his supervision, industry and businesses were nationalized, and socialist “reforms” were instituted by the Communist Party, the only one allowed. In that period, multiple thousands of people fled the country, often on flimsy hand-made boats, launched into the ocean hoping to make landfall in freedom in the United States. Many died enroute, escaping the people’s paradise. Multiple thousands of people were arrested, incarcerated, and shot, or died in captivity for having politically incorrect opinions or in open opposition to the Government tyranny. The United States severed diplomatic relations with Cuba in 1961, and began clandestine plans to invade the island nation. 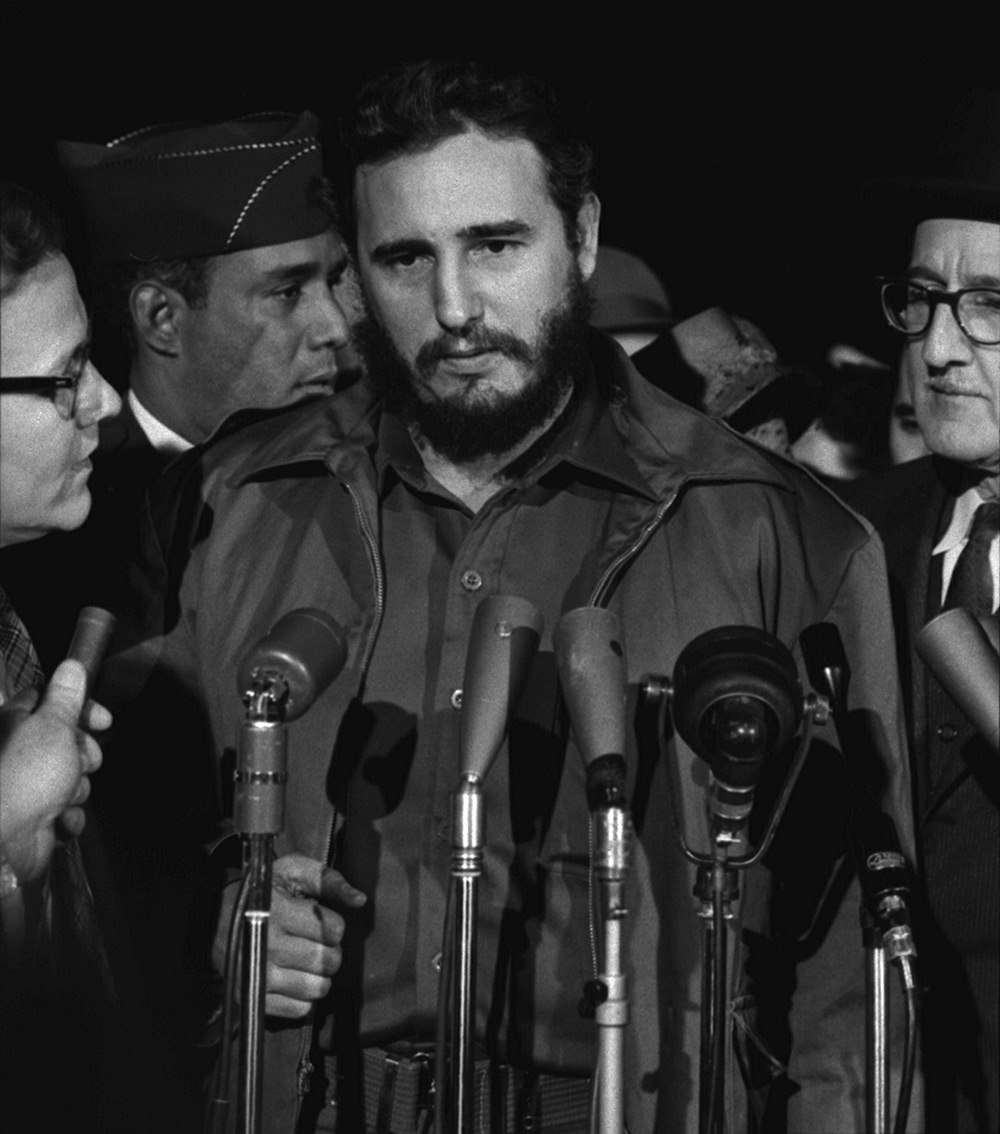 Fidel Alejandro Castro Ruz was born to a Spanish-American war veteran and migrant from Spain, Angel Castro y Argiz, and one of his father’s servant girls, Lina Ruz Gonzalez, whom he later married and with whom he sired six more children. Fidel’s father worked for the United Fruit Company, an American-owned business, which kept the family “fairly prosperous.” Fidel was sent to live with a teacher, and, at the age of eight, was baptized in the Roman Catholic Church and sent to a succession of Jesuit boarding schools. He excelled in sports, especially baseball, for which he exhibited a lifetime interest but neglected serious academic study, preferring fighting, “anti-imperialism” political activism, and making trouble for his teachers. 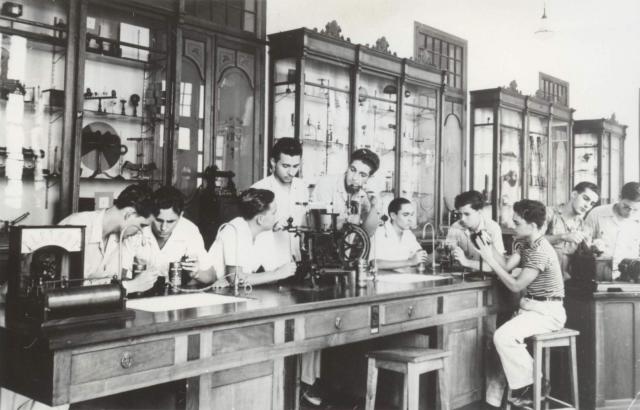 The above photo, taken in 1943, shows Castro during his attendance of the Jesuit-run El Colegio de Belén in Havana, Cuba 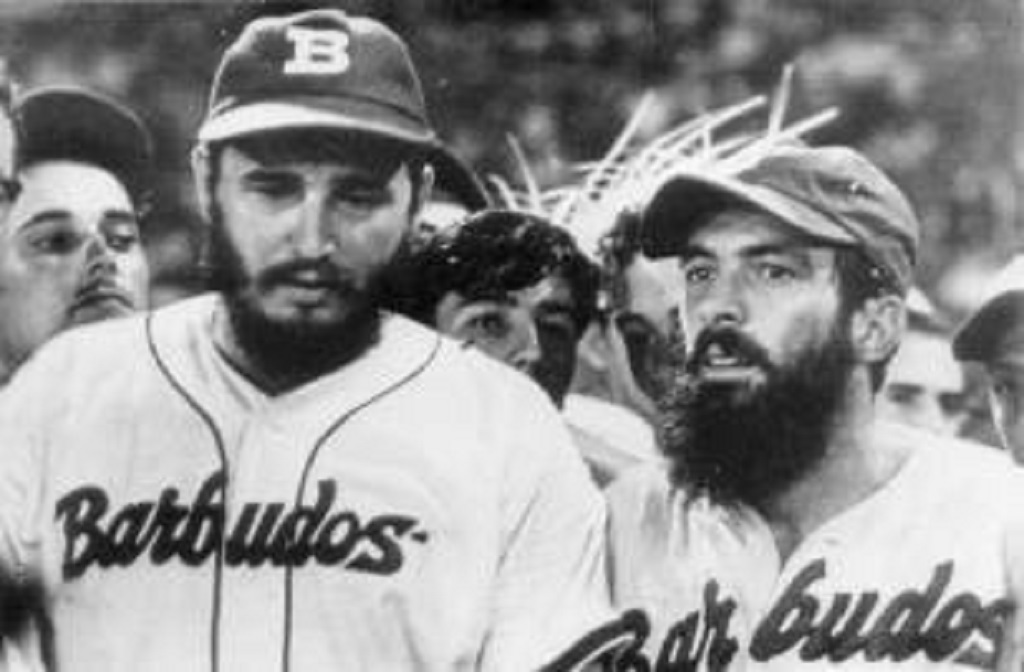 After entering law school at the University of Havana in 1945, he organized “violent gangs” with political goals to overthrow military dictators like Rafael Trujillo in the Dominican Republic and the leader in Columbia, where Castro joined urban rioters in 1948. He practiced law, beginning in 1950, thus joining the profession of the historic leaders of revolution in France of the 18th Century. He ran for a seat in the House of Representatives, an election scheduled for June of 1952, but General Fulgenio Batista overthrew the current President and cancelled elections. Frustrated by the failure of the courts and the majority of Cubans themselves to turn back Batista’s coup d’état, Castro organized a rebel force in 1953 to overthrow Batista. He led a suicidal mission with 160 men against the Moncada military barracks hoping to start a general uprising. Most of his men were killed and Castro and his brother Raul were captured and sentenced to 15 years in prison. 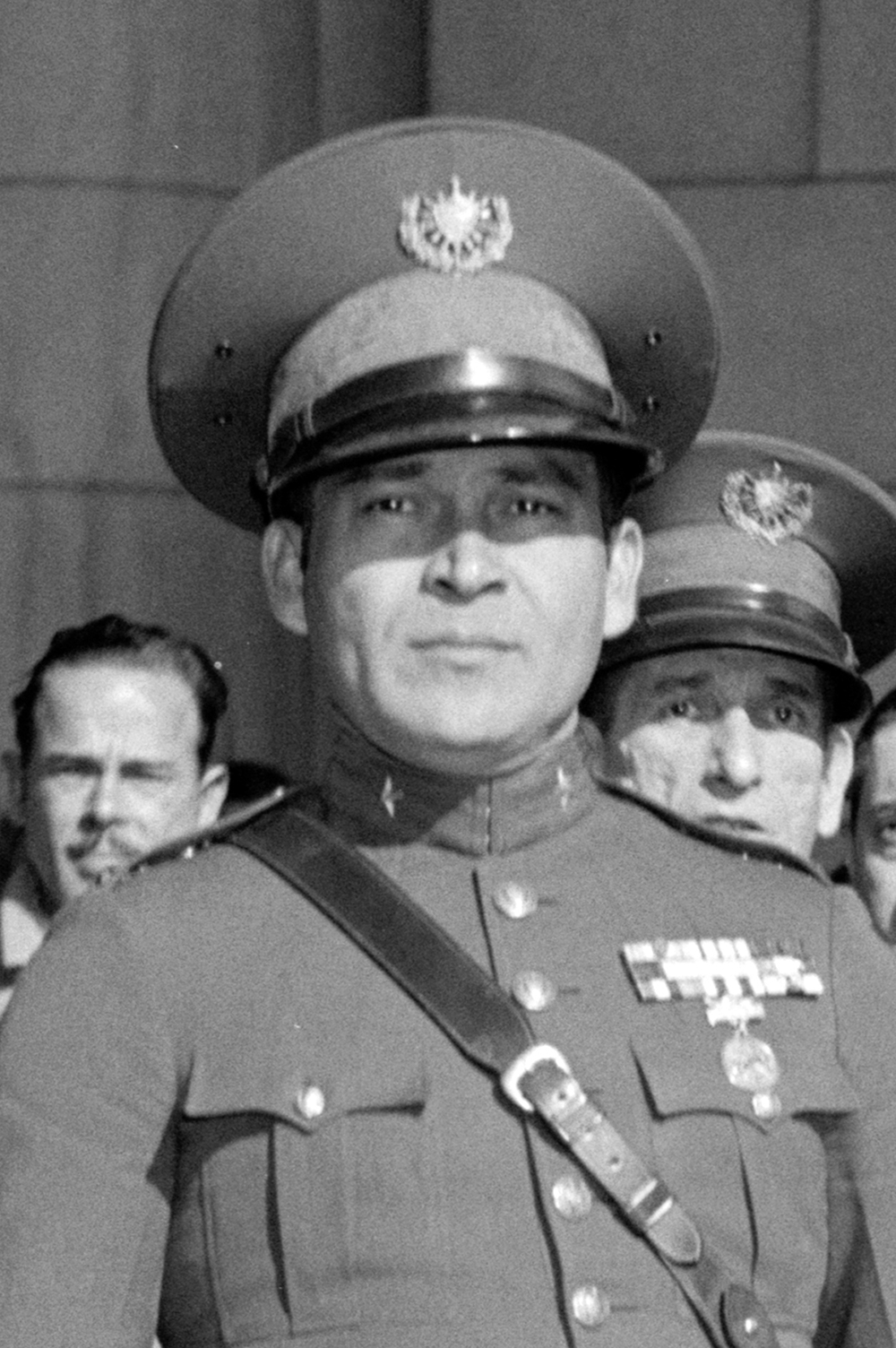 Fulgencio Batista (1901-1973), Cuban military officer who led a 1933 coup d’état against the Cuban government, only to be later deposed himself by the Castro-led Cuban Revolution 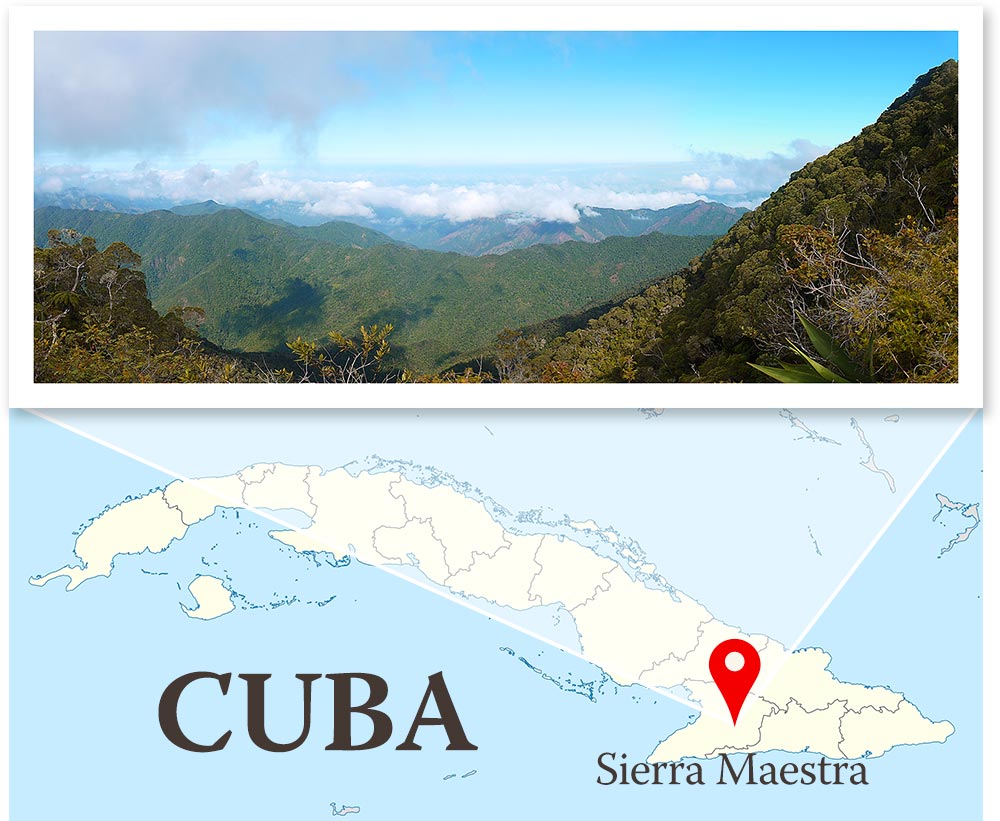 Location of the Sierra Maestra mountain range within Cuba

Released two years later, Castro moved to Mexico where he organized Cuban exiles into a revolutionary cadre known as the 26th of July Movement. In December of 1956 Castro invaded Cuba from Mexico with eighty-one men, only nine of whom survived and fled to the hills (including himself, brother Raul, and future “rock-star revolutionary” Ernesto “Che” Guevara). Rebels of all sorts made their way into the Sierra Maestra to join Fidel’s band, which swelled to 800 guerillas. Military dictator Batista’s government army, thirty thousand strong, though supported by the United States and closely allied to the sugar interests and the American Mafia, proved incompetent, poorly led, and stretched thin around the island, a target-rich environment for outnumbered but well-armed and dedicated revolutionaries. 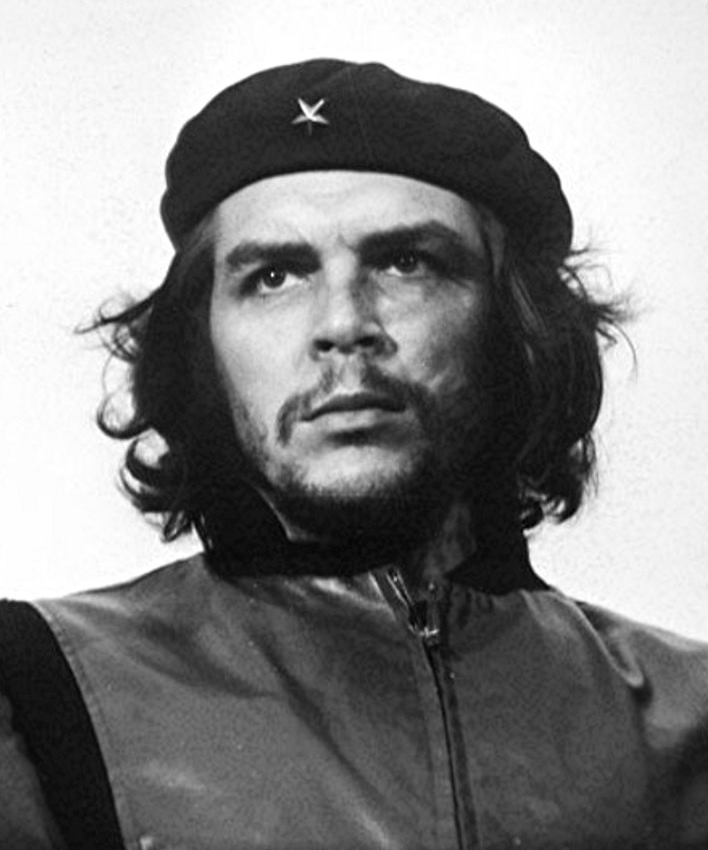 Ernesto “Che” Guevara (1928-1967) an Argentine Marxist revolutionary who played a key role in the Cuban Revolution, and whose image has become a ubiquitous symbol of rebellion 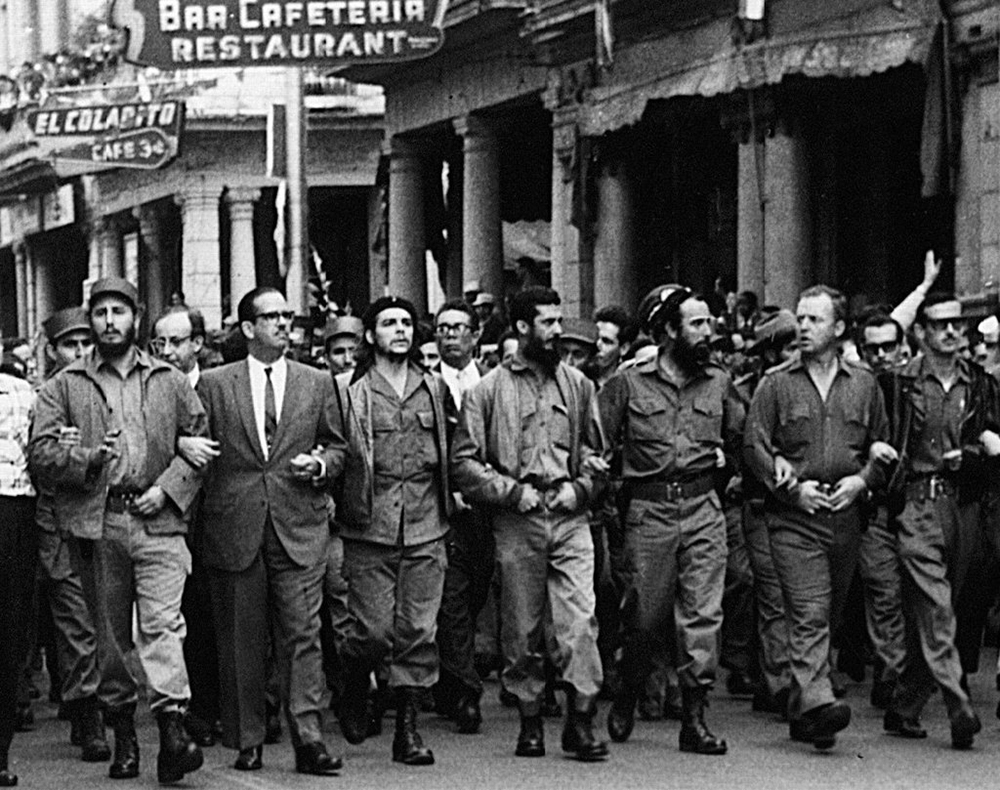 Fidel Castro (far left), and Che Guevara (3rd from left) in Havana, Cuba March 5, 1960, at a memorial service march for victims of the La Coubre explosion which Castro suspected was an act of sabotage by the U.S.

Radical college students, military officers, and other groups tried to overthrow Batista at different times, but in each case failed. The reprisals were ferocious and some estimate that more than 5,000 civilians were killed by the regime from 1953-1959. In 1958 forty-eight organizations signed an open letter supporting Castro’s July 26th Movement, now supported by more than the poor of the countryside. The urban middle classes, usually the men behind successful revolution, backed Castro, just as the United States began withdrawing military and logistical support of the Batista regime. After a called presidential election went sideways with fraud and widespread shenanigans, Batista stepped down and fled to Portugal to live out the rest of his life in regal splendor with the fortune he had amassed as President. On February 16, 1959 Castro came to power as premier, “promising a restoration of the 1940 constitution . . . reinstatement of political and civil liberties, and moderate reform.” Instead, with the support of Russia, he nationalized private commerce and industry and expropriated American businesses and agricultural interests. He acquired weaponry from the Soviet Union and secured his hold on the island with anti-American rhetoric and brutal repression of all opposition. The United States broke all diplomatic ties with Cuba and began preparation for an invasion of the country by ex-patriot Cubans and CIA operatives. The “Bay of Pigs” Operation failed miserably and Fidel Castro embarked on a lifelong dictatorship of socialist repression, backed by international communist states. 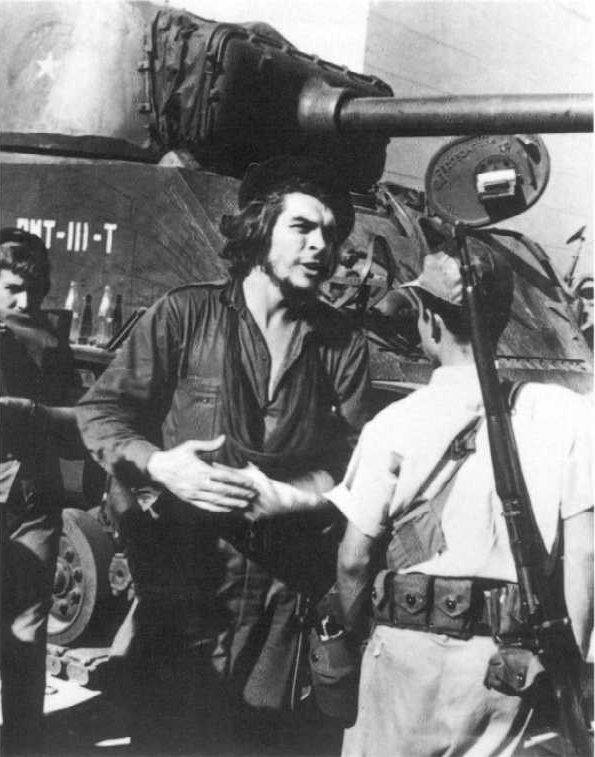 Che Guevara after the Battle of Santa Clara (late December 1958) which was a decisive rebel victory and which prompted Batista to flee Cuba, allowing Castro to claim victory