he legacy of Napoleon Bonaparte (1769-1821) comes readily to mind regarding military innovations and the redrawing of the boundaries of Europe in the 19th Century. Add to those residual effects, the natural French sense of superiority and touchy reaction to international insult, and the volatile combination of international political DNA came to its natural fruition in the leadership of the arrogant and spirited personality of Napoleon’s nephew. Charles-Louis Napoleon Bonaparte, President of France, 1848-52, and “Emperor of the French” from 1852 to 1870 was the last monarch to rule over France, and was founder of “The Second Empire.” He presided over the utter defeat of his beloved country on the field of battle, by the Germans. 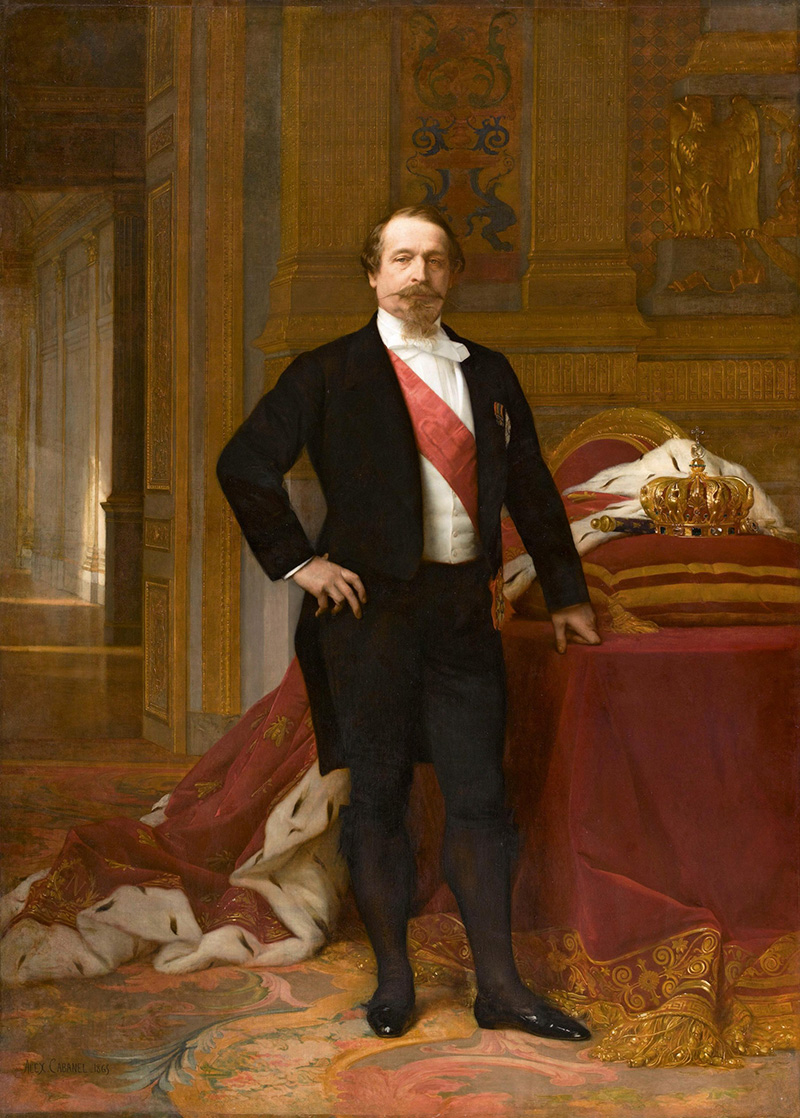 Prior to the conclusion of a war with Napoleon in 1803, there were more than three hundred political jurisdictions among the German states—more than a thousand if all the duchies and smaller entities of the former Holy Roman Empire are counted. The largest were the kingdoms of Prussia and Bavaria, but there were also the multitude of smaller states, independent free cities, family estates, and ecclesiastical territories. After Napoleon’s defeat of the Second Coalition in 1802, the French dictator reduced the number of “the Germanies,” and after the defeat of Prussia in 1806, and the subsequent dissolution of the Holy Roman Empire, he consolidated the princely German kingdoms even more. Their armies were folded into Napoleon’s forces, with 125,000 Germans joining in the invasion of Russia in 1812. Napoleon’s “Continental System” severely damaged the economies of central Europe and spurred the German people to again join together against the French dictator in 1813. In the Battle of Nations, more than half a million men engaged in the largest land battle in Europe in the 19th Century. Austria, Prussia, Sweden, Russia and Saxony finally defeated Napoleon. After his first exile and last grasp for power and the return of Gloire at the Battle of Waterloo against England and Prussia (costing another 72,000 casualties), the French emperor was forced to end his and the French Empire’s attempt to rule all of Europe. 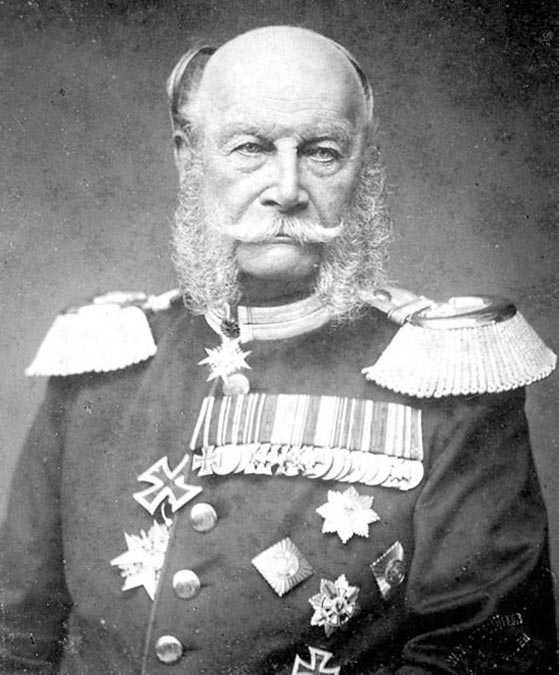 Wilhelm Friedrich Ludwig (1797-1888), King of Prussia and Emperor of Germany 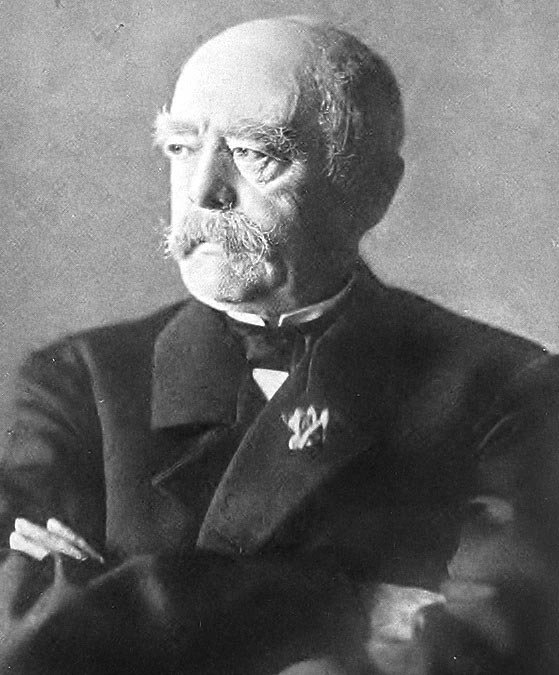 The Congress of Vienna enlarged Prussian boundaries and consolidated thirty-eight other German states under the political authority of Austria. The idea of both a linguistic and geographic German unity percolated through the German-speaking states over the following fifty years. A growing unification movement complete with nationalistic songs, stories, and historical pride combined with an expansionist and increasingly militaristic leadership of Otto von Bismarck. Prussia defeated Denmark in a small war in 1864, and crushed Austria two years later, consolidating several smaller German states under a north German Confederation of Prussian rule. Most of the German states, by 1870, had turned to King Wilhelm of Prussia and to Chancellor von Bismarck for leadership and protection. One French wit claimed that the German nation was hatched from a cannon ball. 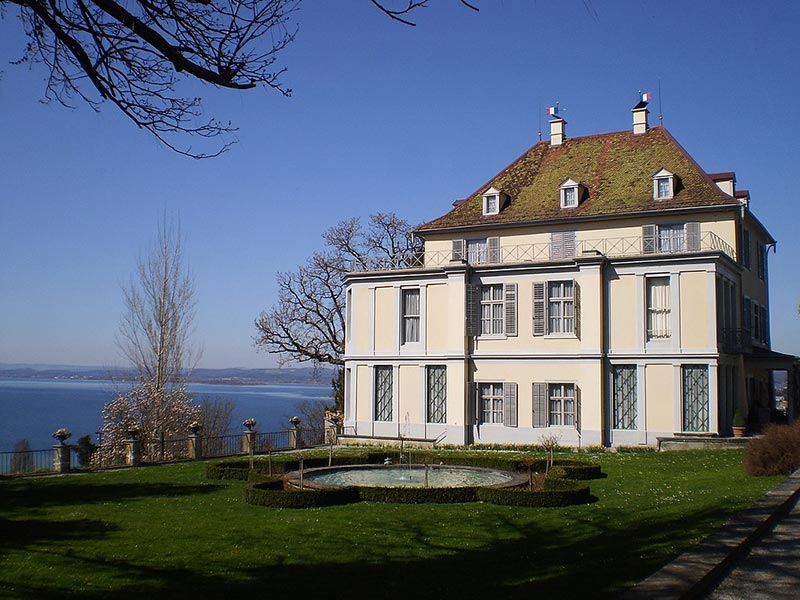 Castle Arenenberg in Switzerland, where Louis Napoleon spent much of his youth and exile

The man who became Napoleon III was born Charles-Louis, to Napoleon Bonaparte’s brother, Louis, in 1808. Sent into exile after Waterloo, with the rest of the Bonapartes, young Charles-Louis was raised primarily in Switzerland and Germany, although his tutor was a former French Revolutionary Radical and friend of Robespierre. Bonaparte was arrested several times trying to reinsert the Napoleonic family into French politics. 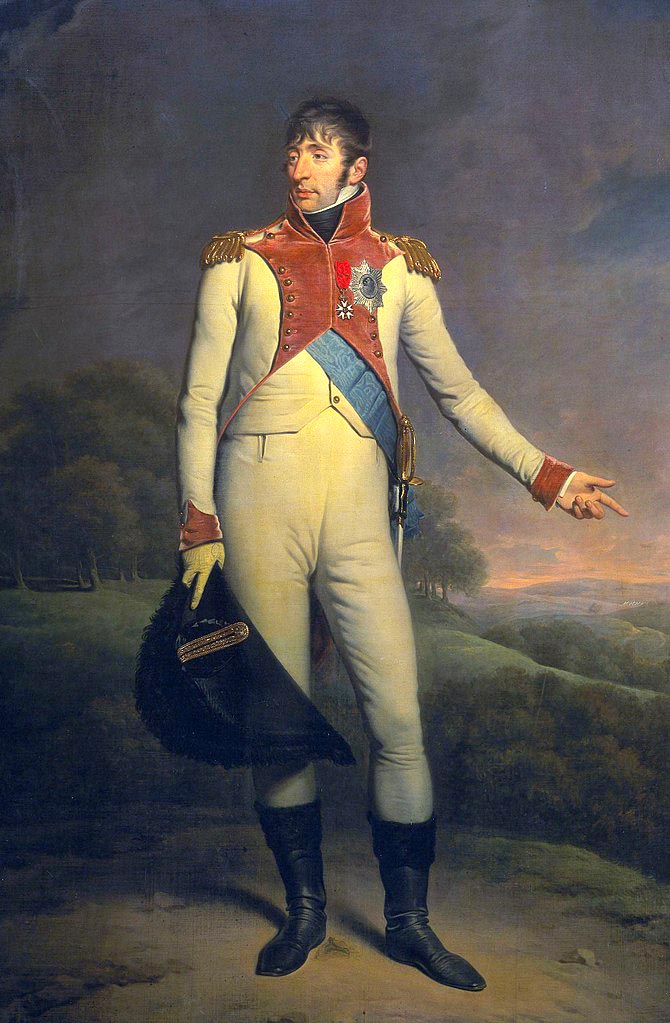 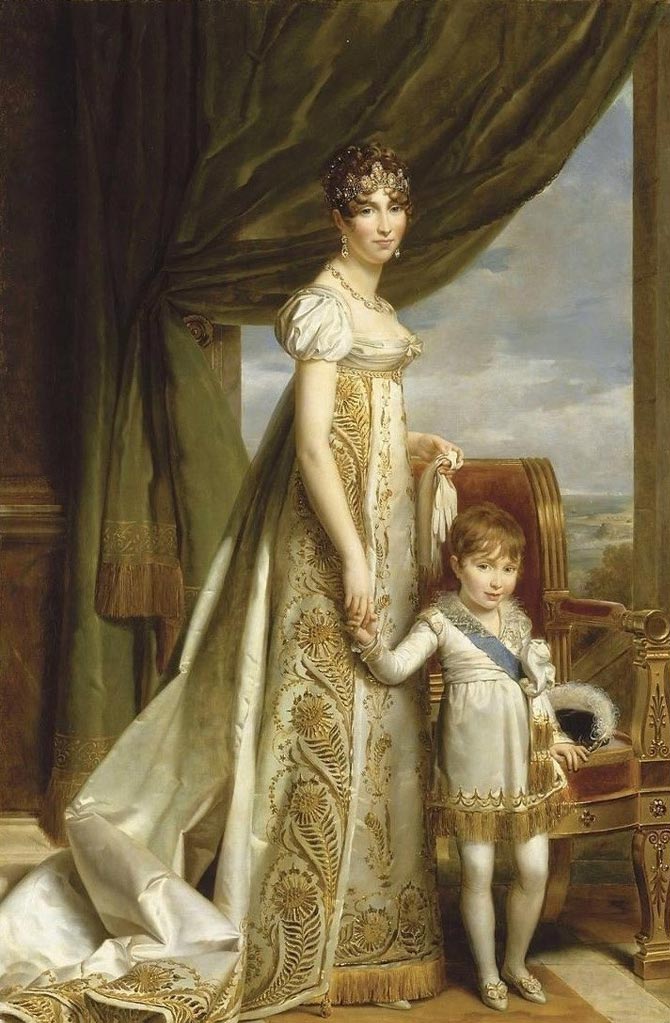 Following the Revolution of 1848 in Paris, Louis Napoleon, after living in England, the United States, and Switzerland, joined the growing list of men interested in following the abdicated King Louis Phillipe into power. Elected President in 1848, the romantic nephew of Napoleon Bonaparte promised universal male suffrage, and proclaimed his support for “religion, family, property, and peace.” He decided after his three-year term in office, the people would support a suspension of the constitution in order to keep him in power. He overthrew himself, then ordered a plebiscite so the people could confirm his actions. He settled scores with old enemies and declared the Second French Empire. 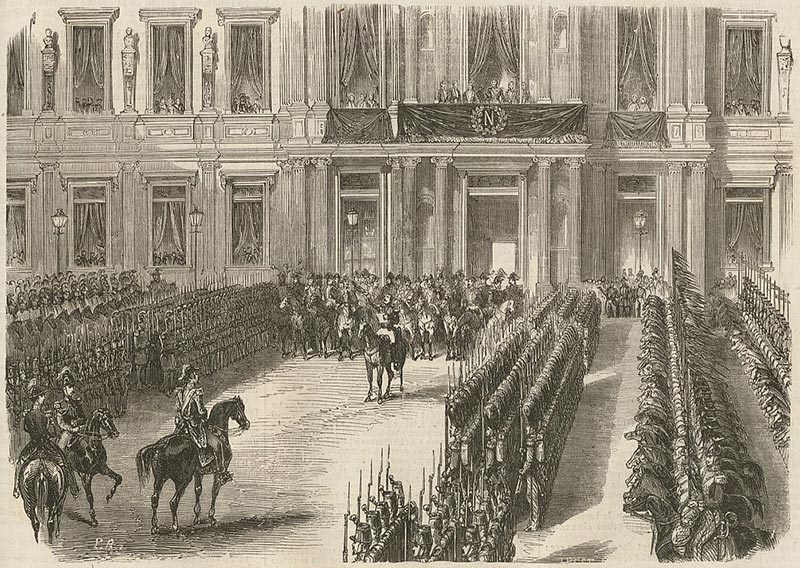 The official declaration of the Second Empire, at the Hôtel de ville, on December 2, 1852

As Emperor Napoleon III, he participated in several small wars prior to 1870, not seeking to regain the militant grandeur of his uncle, but definitely committed to defending French honor and restoring the elan of French arms. As had happened in the 18th Century, a succession crisis in Spain became the occasion for conflict between France and the burgeoning German nation whose leader promised the world that only a policy of blood and iron would bring success and respect. Von Bismarck learned the deft political strategy of manipulating his opponents into declaring war on Prussia, and a weak and sickly Napoleon III obliged him the occasion on July 19, 1870 when the French Parliament declared war. In the course of the six months of war, France mobilized more than two million men, and Prussia more than one and a half million. The Prussians maneuvered the French armies into strategic traps and their superior weaponry produced overwhelming casualties. Prussia suffered about 145,000 casualties and the French more than a million in the course of the war, including the capture of Louis Napoleon. 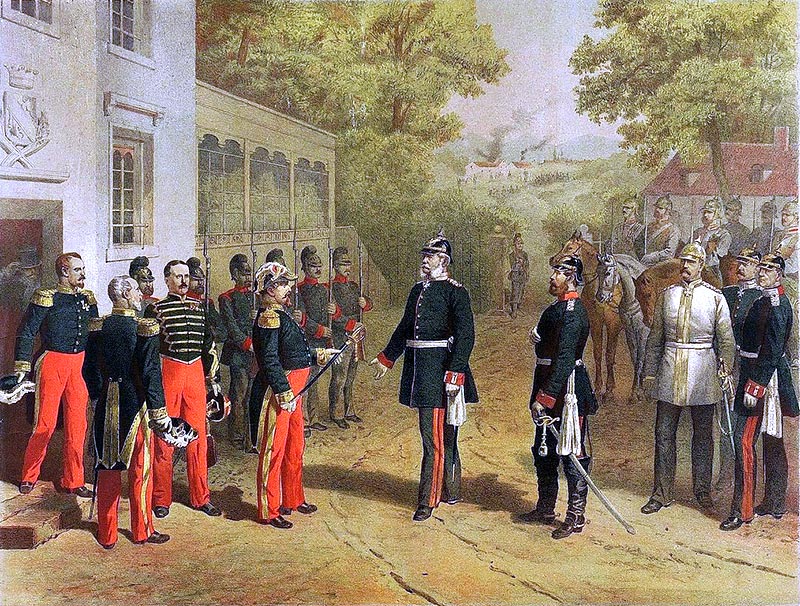 Surrender of Napoleon III to Otto von Bismarck after the Battle of Sedan, September 1, 1870

The French nation was stunned by the swiftness and the severity of the defeat and a desire for retribution passed on through the next several generations. Within just a few years, fear and distrust of opposing alliances, a continuing arms race, and old nationalist memories, established the international political environment that would erupt into the First World War in 1914. Many dots connect from the French Revolutionary years of Napoleon Bonaparte to the 20th Century. 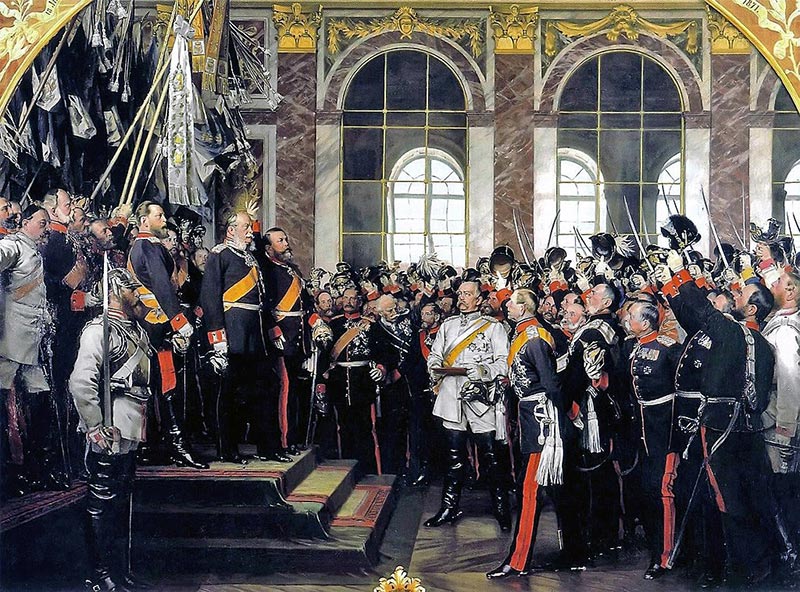 The proclamation of Prussian King Wilhelm I as German Emperor at Versailles, January 18, 1871