“Now in those days a decree went out from Caesar Augustus, that a census be taken of all the inhabited earth.” —Luke 2:1

“…but when the fulness of the time came, God sent forth his Son, born of a woman, born under the law…” —Galatians 4:4

um esset Caesar in citeriore Gallia. . . and so begins De Bello Gallico, The War in Gaul by Julius Caesar. It has often been the first Latin translated by every school-boy and girl for hundreds of years. 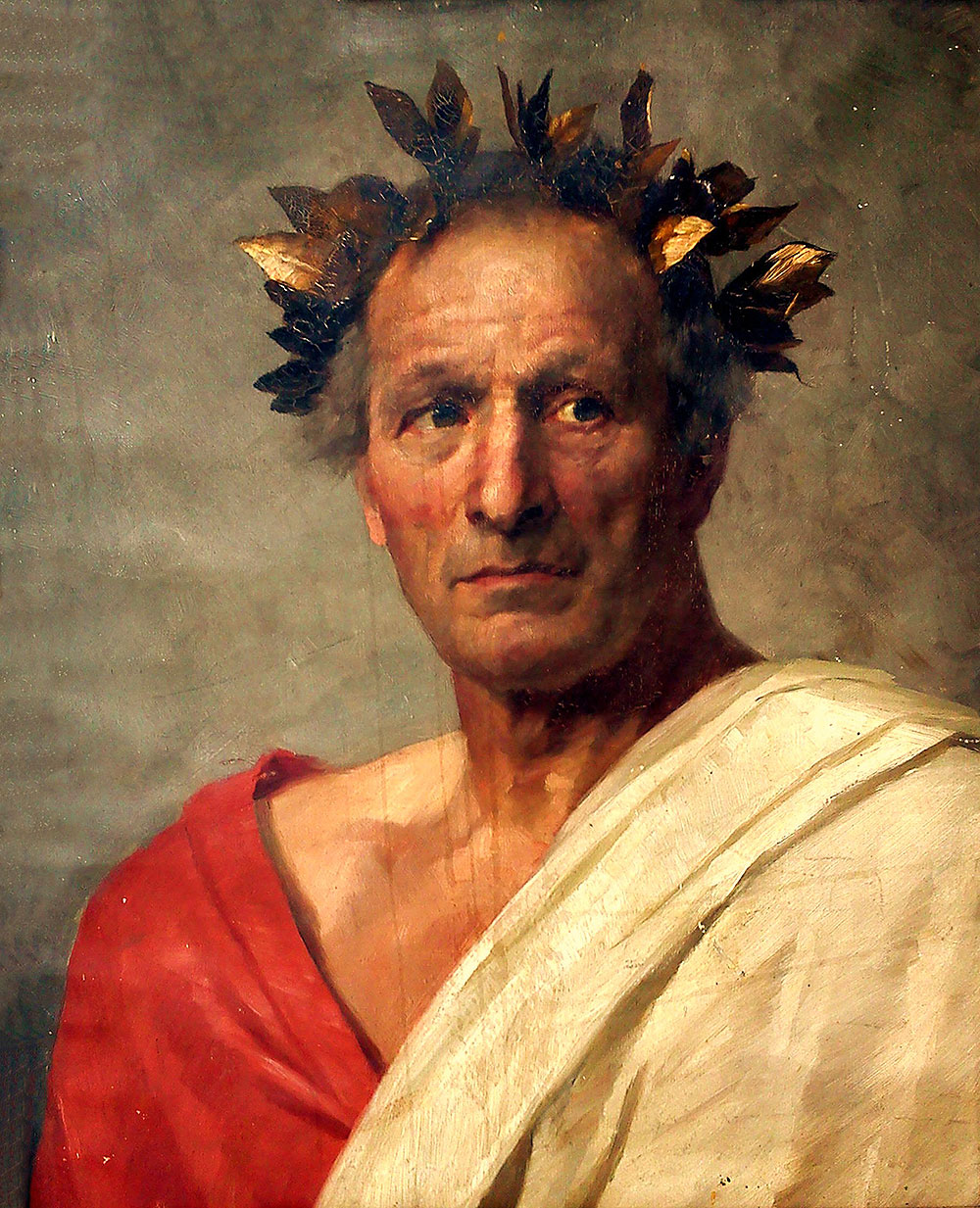 He is the most famous Roman emperor of all time, not just because he conquered Gaul, became the first emperor, and put an effective end to the Republic, but because he also caught the imagination of a 17th-century English playwright named William Shakespeare. The great poet and playwright took the historical bones of Caesar’s end and breathed life into him in a most dramatic way, an accomplishment that has stood the test of time and delighted audiences and readers for more than 400 years. Caesar’s final words et tu Brute’ put the final touch on the tragedy, and entered the English language as a trope. The truth of Caesar’s life, his astounding accomplishments, his brilliant erudition, and the future he established by his seizure of power changed history and is well worth our reflection upon today. 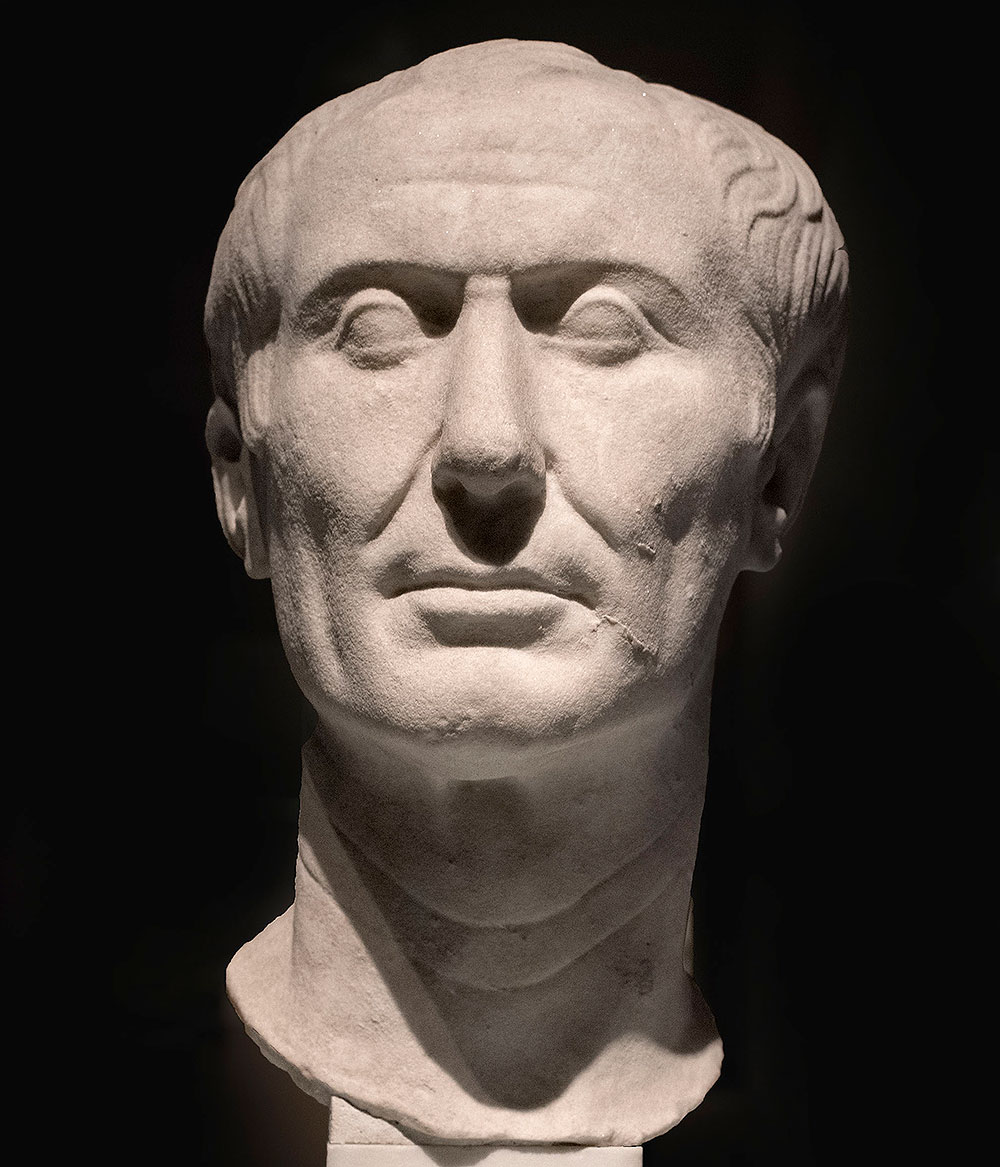 Dated sometime between 50 and 40 BC, this bust of Julius Caesar—known as The Tusculum portrait based on the location of its discovery—is thought to be the only surviving likeness of him made during his lifetime 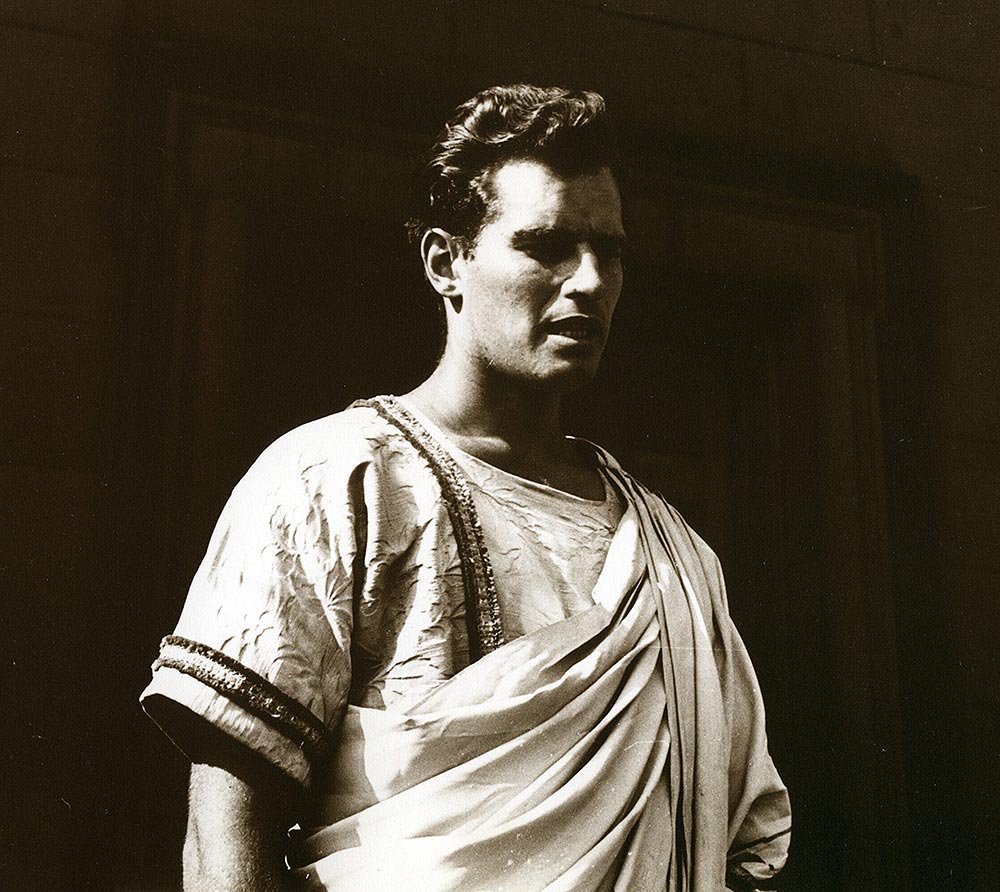 Caesar was born to a Patrician family and named after his father Gaius Julius Caesar who was governor of Asia. Young Caesar became the head of his family at sixteen, but lost his own position as a high priest of Jupiter after his Uncle Marius found himself on the losing end of a war with a rival, General Sulla. Bereft of his inheritance and punished for not divorcing his wife Cornelia, Julius Caesar embarked on a military career, a choice he later attributed to the divine providence of the gods. His new career was marked by an amazing series of adventures and excitement—for instance, capture by pirates, release through payment of a ransom, and return with a fleet to capture and crucify his former captors. He followed the Roman road to power through election as a military tribune, then as a quaestor, in 69 BC. As a brilliant and companionable Roman official, Caesar achieved public acclaim by sponsoring successful public games and was elected Pontifex Maximus, Rome’s chief priest, and shortly after, as praetor in Hispania. He retired as a most successful and popular governor in 62 BC, age thirty-eight. 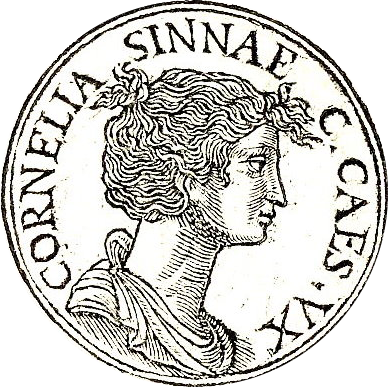 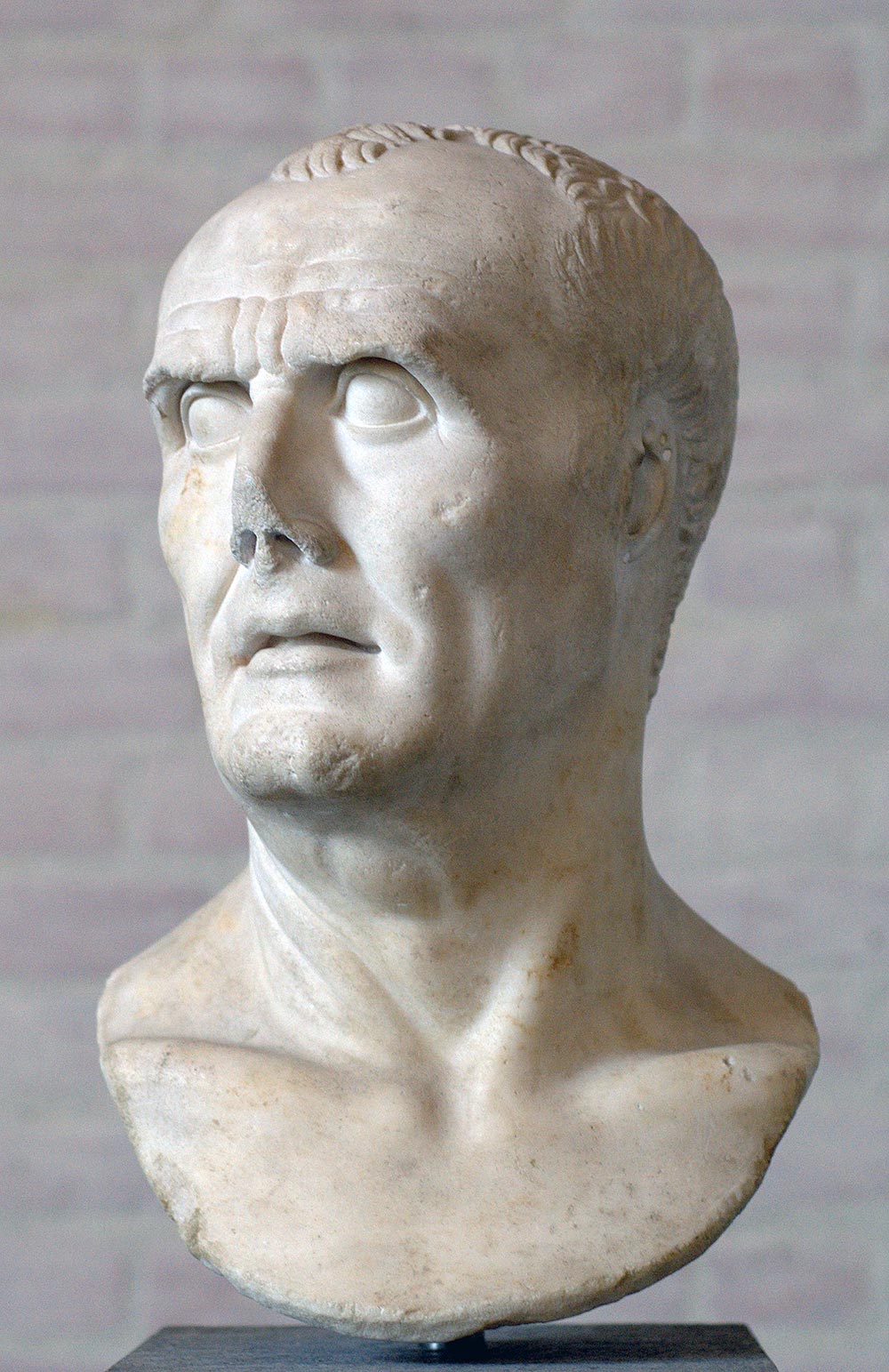 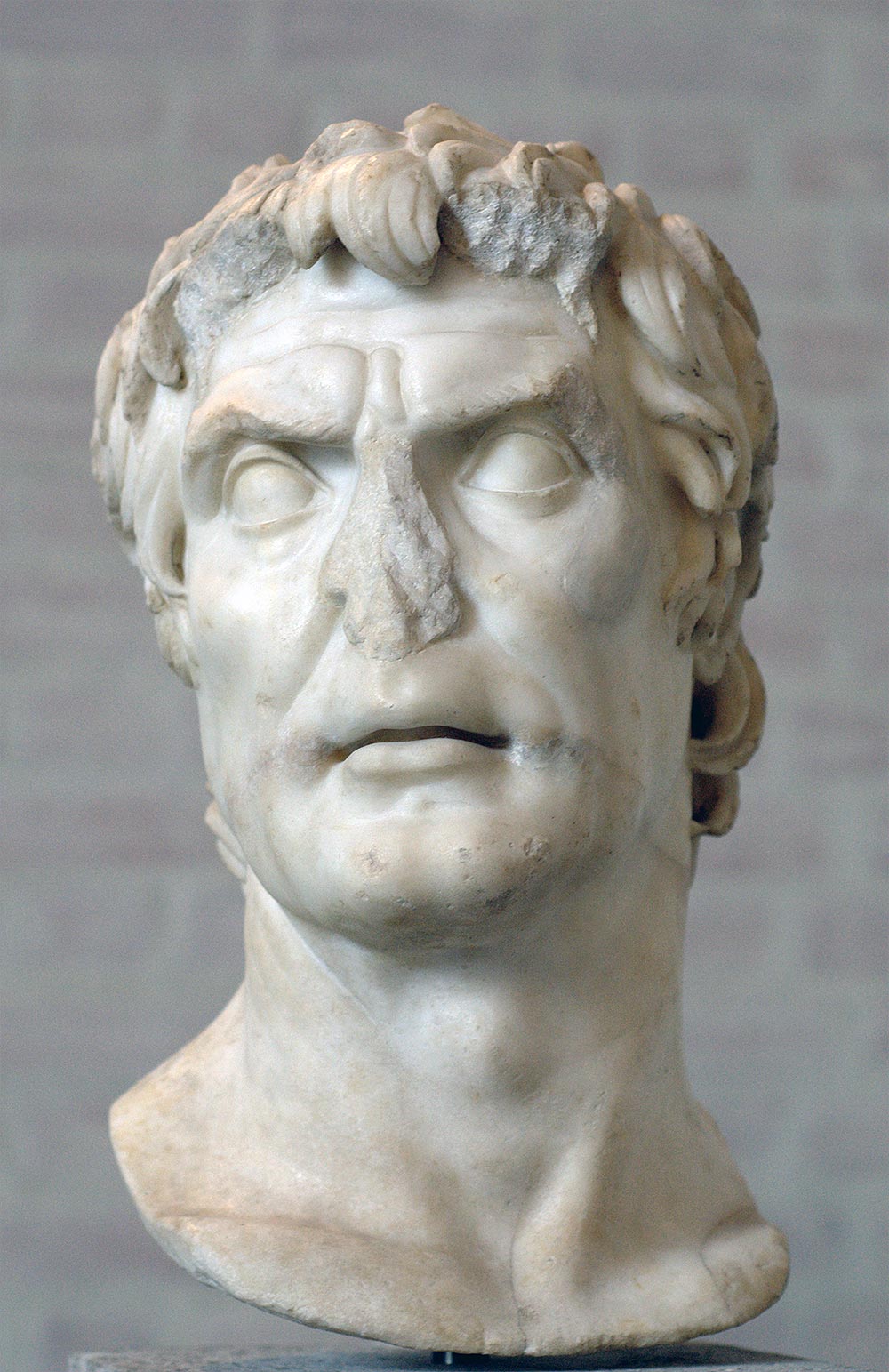 From about 500 BC to 27 BC Rome was governed as a republic. Elected Senators oversaw the expansion of Roman hegemony over the Mediterranean world, first in conquest of the tribes of the Italian peninsula, then tragic wars against Greece and Carthage. Despite defeats and other setbacks, the Senate proved remarkably stable and resilient. In the century before the coming of Christ, various Roman generals vied for favor and dominance. None succeeded like Gaius Julius Caesar. 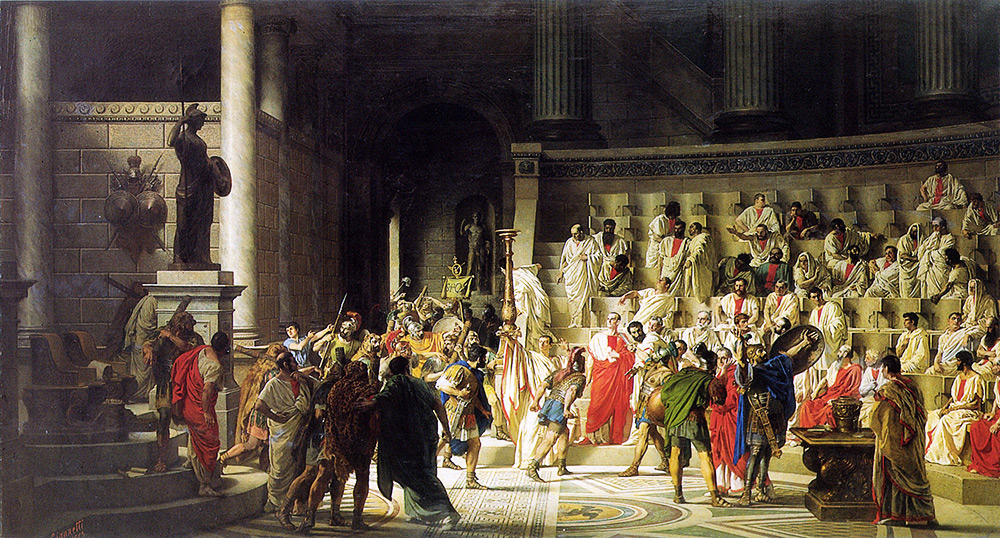 The Last Senate of Julius Caesar, by Raffaele Giannetti.
For centuries, Rome was governed as a republic by elected Senators.

Elected as consul, Caesar joined two other powerful politicians in ruling Rome as “The First Triumvirate.” When his term ended, the talented official acquired the governorship of Gaul and with it, four legions of professional soldiers. As commanding general, Caesar led his forces from one triumph to the next over rebellious tribes, recounting it all in detail in what would become the military classic, The War in Gaul. The historian Plutarch recorded that Caesar conquered three million enemies, killing and enslaving up to two million, including initial forays into Britain. 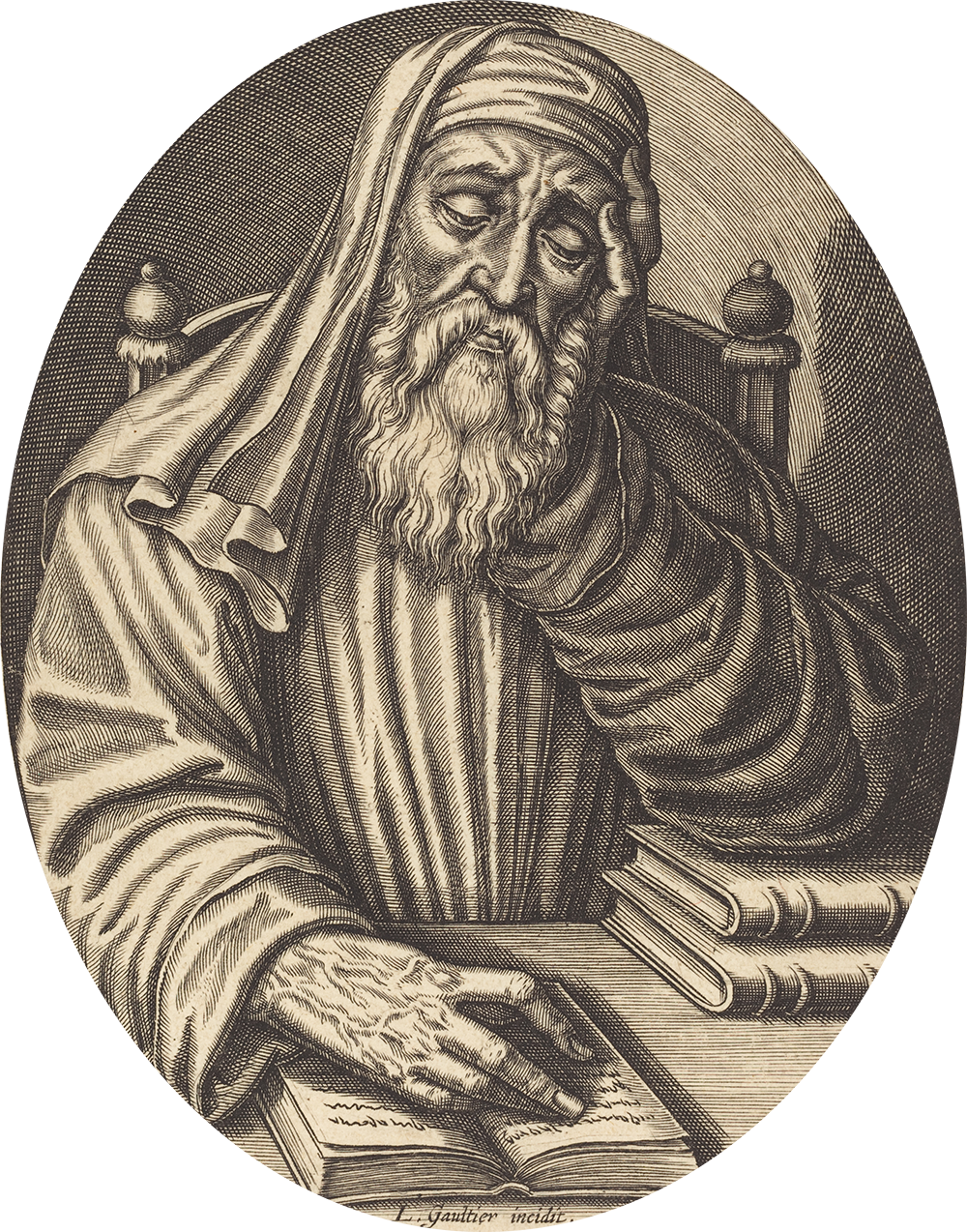 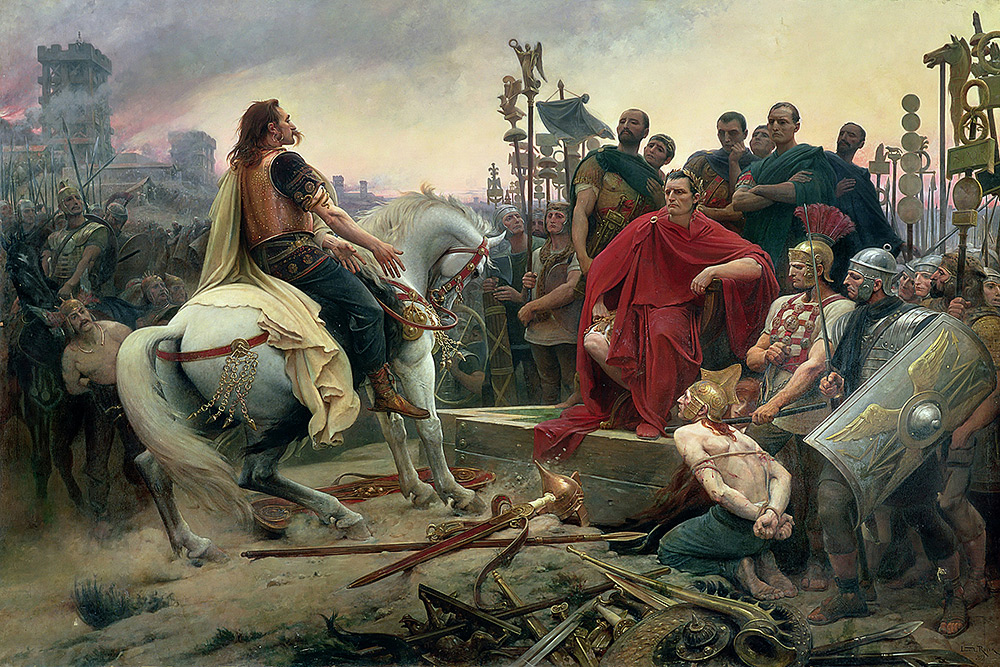 In 49 BC Caesar crossed the Rubicon River with the XIII legion, (Gemina), thus signifying defiance to the Senate and intentions of conquering Rome, or at least ousting the current Generals holding power. In the civil war which followed, Caesar defeated Pompey and his supporters. In Egypt the new Roman dictator sided with Queen Cleopatra against the Pharaoh, installing her as the next ruler there. Caesar continued fighting wars and battles against perceived rivals, and Rome continued to elect him to terms as dictator and consul. Military historians today count him among the top ranks of military commanders in history. Ironically, he pardoned most of his conquered enemies, expanding Rome’s authority over millions.

During the late Roman republic, the River Rubicon marked the northern border of Italy, and Caesar’s crossing under arms would have been seen as insurrection and a declaration of war 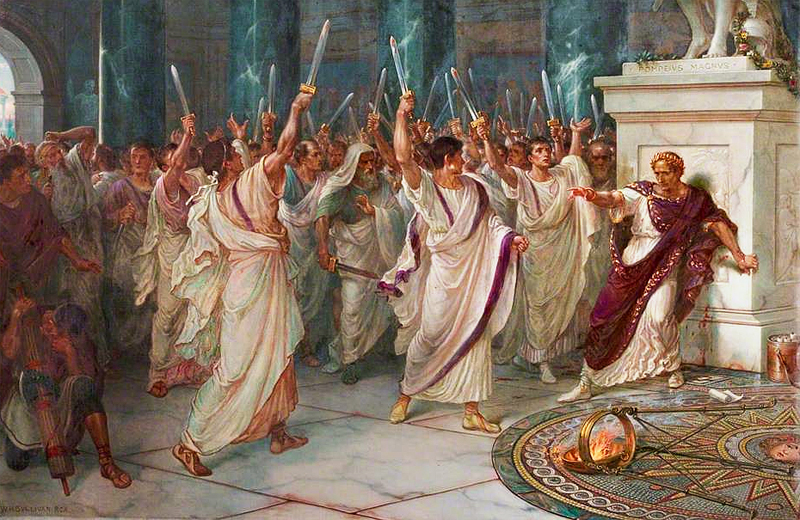 The assassination of Julius Caesar by members of the Roman Senate

Caesar instituted many reforms in Rome and expanded public entertainments to the delight of the hoi polloi. He instituted many magnificent building projects, issued popular land reform and essentially marginalized the Roman Senate, making them subservient to his wishes. A plot was hatched by a cabal of Senators to assassinate Caesar. They distracted his supporters, primarily Marcus Antony, and pounced on Caesar March 15, 44 BC—The Ides of March. He died of twenty-three stab wounds. The death of Caesar also resulted in all sorts of unintended providential consequences—the practical end of the Republic, the elevation of his nephew Octavian, “Caesar Augustus,” the dictatorship of a new and greater Caesar, the creation and expansion of the Roman Empire, and, now “in the fullness of time,” during the Pax Romana, Christ was born in the Province of Judea. 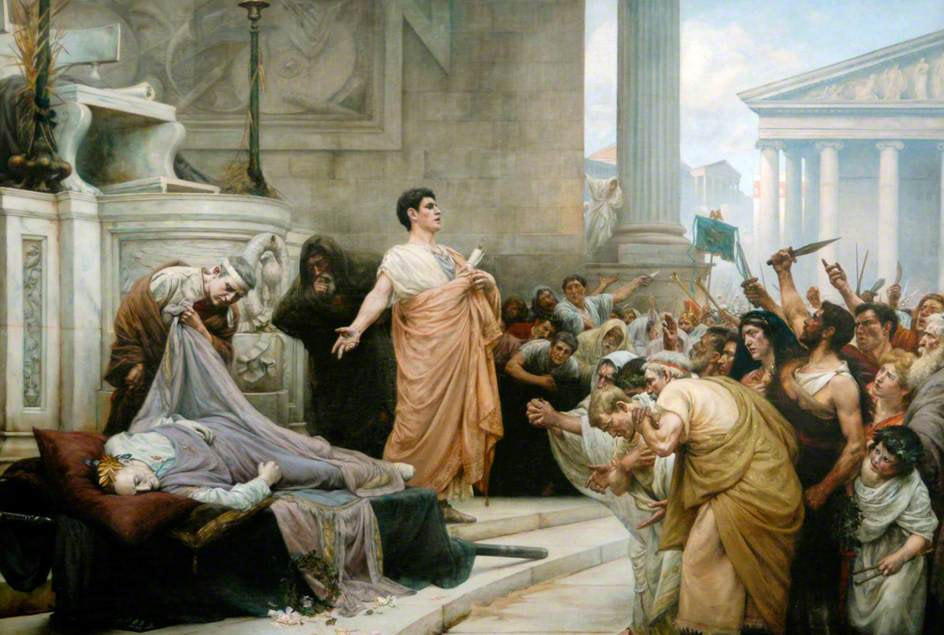 Mark Antony’s oration at the funeral of Julius Caesar