“So then it is not of him that willeth, nor of him that runneth, but of God that sheweth mercy.” —Romans 9:16

hat historians have deemed “The Second Great Awakening”—a wide-spread religious revival in America—began around the turn of the 19th Century and continued sporadically in different areas of the United States until the Civil War. Alongside all real Holy Spirit-led awakenings, counterfeits have also abounded—there have always been tares among the wheat in the Church. Certain characteristics of true revival typically accompanied such phenomena, the most common and certain of which was intense and powerful prayer by laymen and women as well as the clergy. One of the most amazing examples of this truth occurred in New York City in 1857. 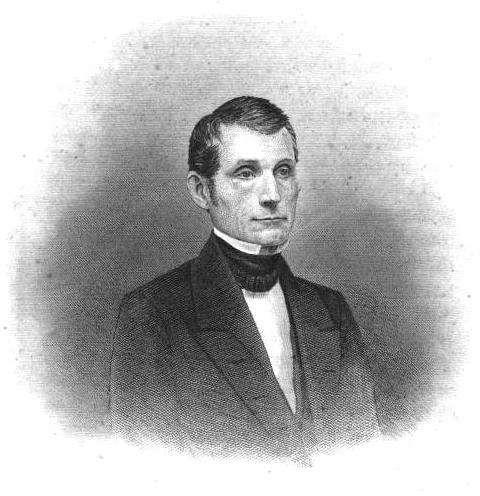 It all began with 48-year-old businessman and “evangelist to the inner city”, Jeremiah Lanphier, who gave up his business, determined to besiege the throne of Grace for the success of the Gospel in New York City, among both the poor of the lower East Side and among the prosperous Manhattanites of Wall Street. Lanphier was described as a “tall man with a pleasant face and an affectionate manner” and “endowed with much tact and common sense.” He had sat under the preaching and guidance of Virginian J.W. Alexander, son of Archibald Alexander and pastor of 19th St. Presbyterian Church in Manhattan. His preaching had emphasized the Holy Spirit’s work in salvation and the importance of prayer. 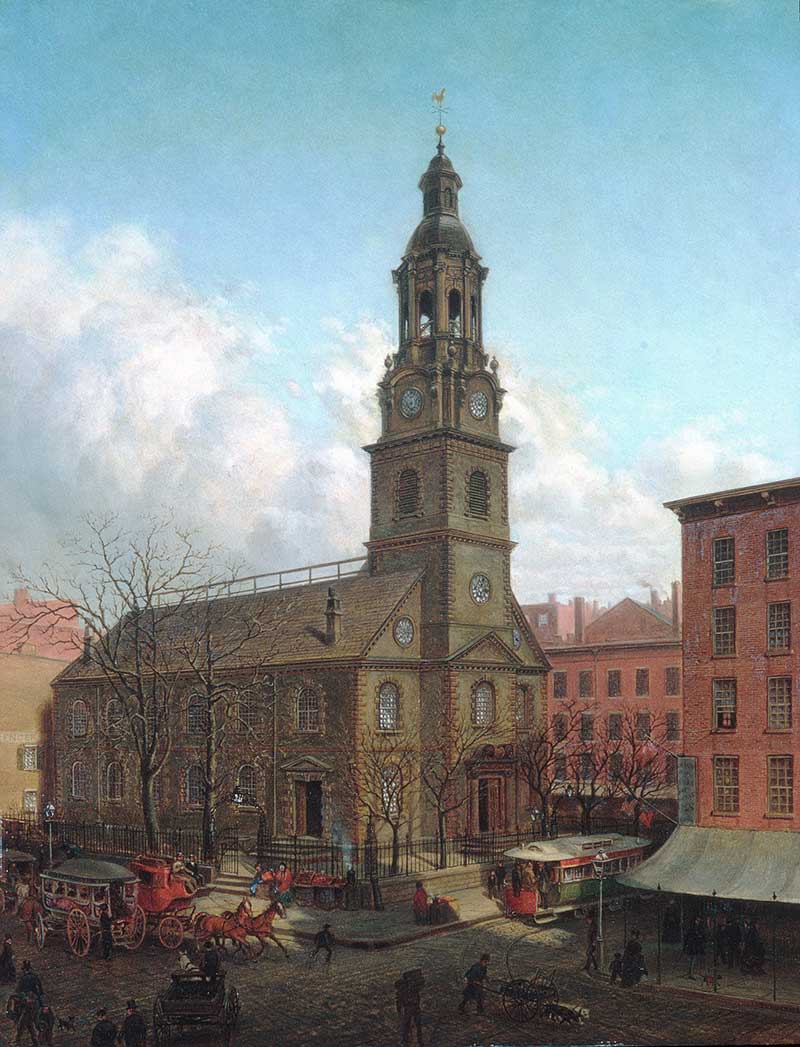 Mr. Lanphier invited one and all to meet at the Consistory of the North Dutch Reformed Church at noon on September 23, 1857 to join him in prayer, to implore God to convict sinners and bring repentance in the midst of the great city. By 12:30pm only one other person had showed up. After an hour, six men total poured their hearts out to God for mercy. Lanphier did not give up, however, and within a week he had sixteen; in three weeks, forty. They prayed for unsaved family members and friends. By October 18, there were consistently about one hundred people per day joining him to pray for God to bring revival. 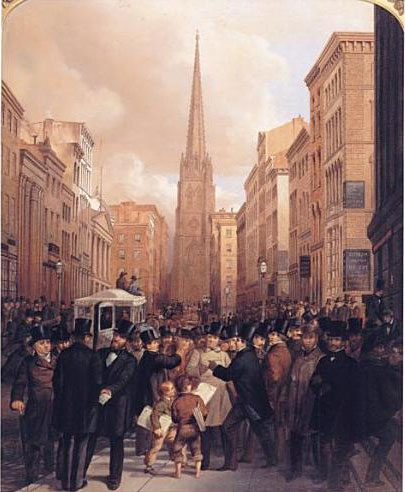 The Panic of 1857 as portrayed by James H. Cafferty and Charles G. Rosenberg

The economy went through a crash in late October, and 30,000 New Yorkers lost their jobs. By November, the church was so crowded with men who came to pray every Wednesday at noon that they had to use every floor of the church. Soon, prayer meetings were being held in churches all over the city and hundreds of people had confessed faith in Christ.

“The newspaper editor, Horace Greely, who worked for the New York Tribune, sent a reporter with horse and buggy to ride from one prayer meeting to the next to see how many men were praying. In one hour he could only get to twelve meetings, but he counted more than 6,000 men . . . confessing their sins and praying for revival.”

Other cities followed their lead, in Cleveland, St. Louis, Pittsburgh and Chicago, with 5-10,000 praying businessmen and others in each city. 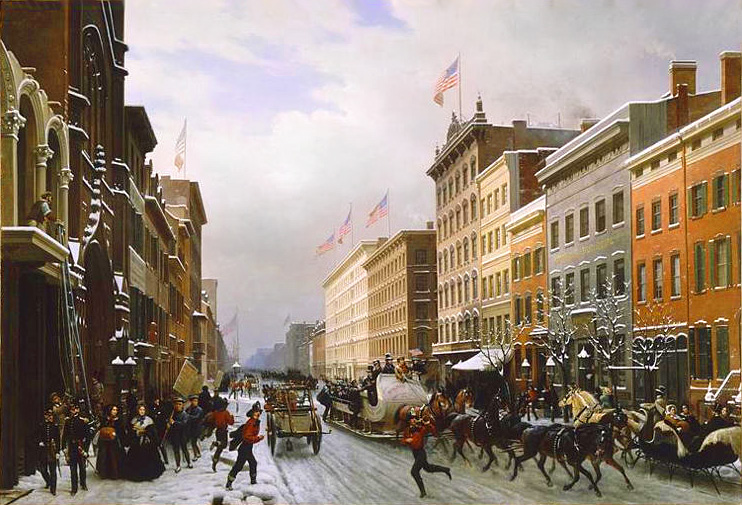 New York City in 1840, much like Lanphier would have known it

“[T]he great waves of religious excitement which is now sweeping over this nation, is one of the most remarkable movements since the reformation . . . travelers relate that in cars and steamboats, in banks and markets, everywhere through the interior this matter is an absorbing topic. Churches are crowded . . . school-houses are turned into chapels, converts are numbered by the scores of thousands. In this City, we have beheld a sight which not the most enthusiastic fanatic for church-observances could ever have hoped to look upon; we have seen in a business-quarter of the City in the busiest hours, assemblies of merchants, clerks and working-men, to the number of 5,000 gathered day after day for a simple and solemn worship . . . It is most impressive to think that over this great land tens and fifties of thousands of men and women are putting themselves at this time in a simple and serious way the greatest question that can ever come before the human mind: ‘what shall we do to be saved from sin?’”

Some men of that day believed that fully one million people were converted during this last great spiritual upheaval, soon to be replaced with Mr. Lincoln’s War and a return to economic excesses never before realized in America. 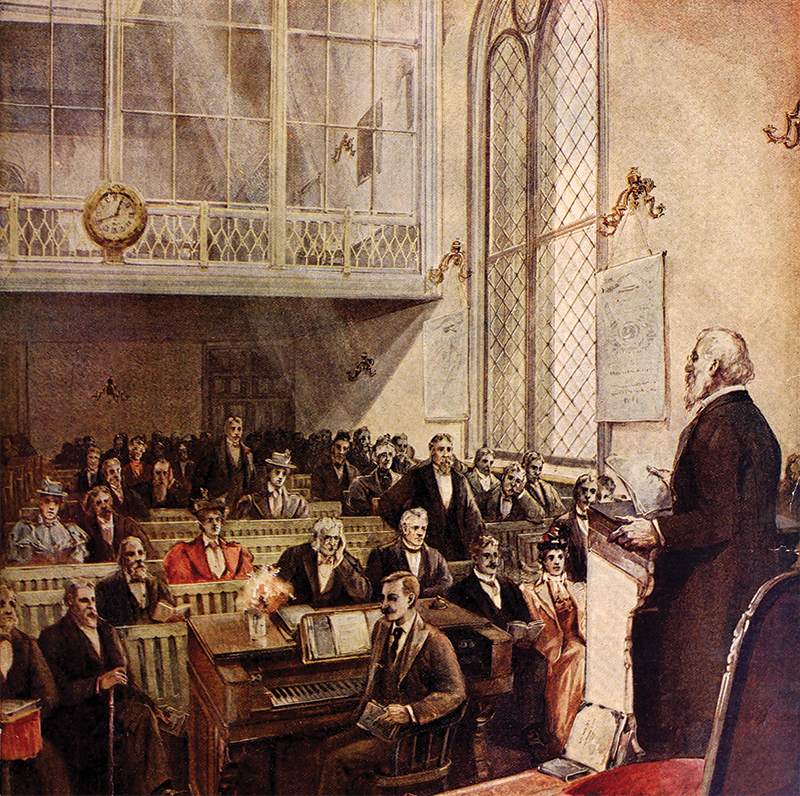 A request for prayer at a Fulton Street prayer meeting

The “Fulton Street Revival” began with a church concerned about their city, one man commissioned to start a prayer meeting, and the faithful prayer of just a few earnest Christians. Today, the New York Times reports with glee the anti-Christian riots and the overthrow of Christian society. Would that a true spiritual awakening spring up once again, on an international scale, with faithful preaching, real repentance and faith, prayer, and millions of converts to the biblical faith that permeated the generation that experienced the “New York City Revival of 1857”.