n ancient Norse mythology, Valkyries were goddesses, appearing as female warriors who attended battlefields to escort the souls of the slain to one of two destinations in the afterlife, half going to Valhalla, home of the gods. The Valkyrie appear in the ancient pagan Edda poetry, in song, and Sagas. In modern times, German composer Richard Wagner included them in his “Ring Cycle,” a powerful and evocative musical rendition of nine Valkyries in “The Ride of the Valkyries”, and made famous again as the score in the American helicopter attack in Apocalypse Now, a film on the war in Vietnam. On July 20, 1944, Operation Valkyrie became the name of an attempted coup in Germany, to begin with the assassination of Adolph Hitler.

A layout of the room where the July 20 plot took place. The yellow square denotes the location of the suitcase bomb, the blue dot is Hitler, red are casualties, and green are survivors.

Well before July 20, top-ranking officers, with Hitler’s approval, devised a plan to keep the Reich alive politically and militarily in case of internal disturbances that might threaten their continuing the war. The “Reserve Army” could be mobilized by Hitler or Col. Gen. Friedrich Fromm, the commander of the Reserves. Their emergency plan was known as Operation Valkyrie. The General who designed the original plan added to it the mobilization of the Reserve into “battle groups ready for action.” In August of 1943, Major General Henning von Tresckow detailed instructions for the seizure and operation of the SS headquarters of Heinrich Himmler, radio stations, telephone exchanges and other infrastructure apparatus. All the secret documents were handled by Tresckow’s wife and secretary wearing gloves to avoid fingerprint detection. 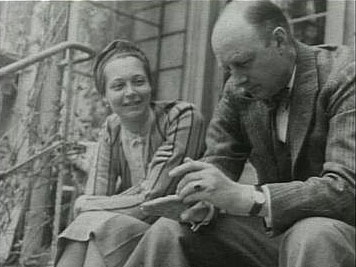 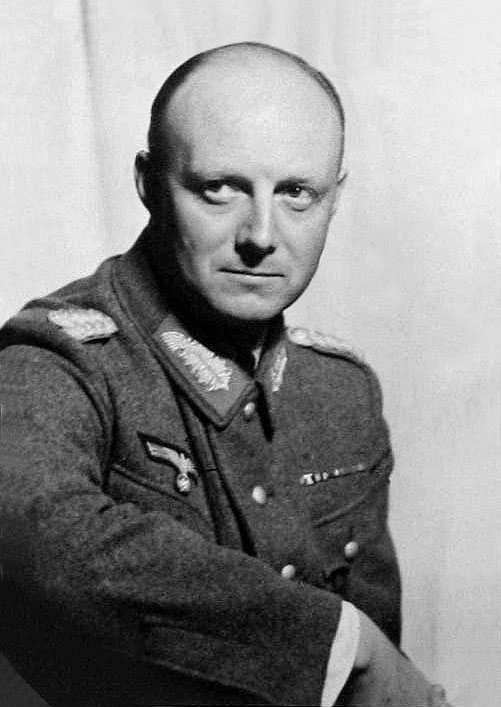 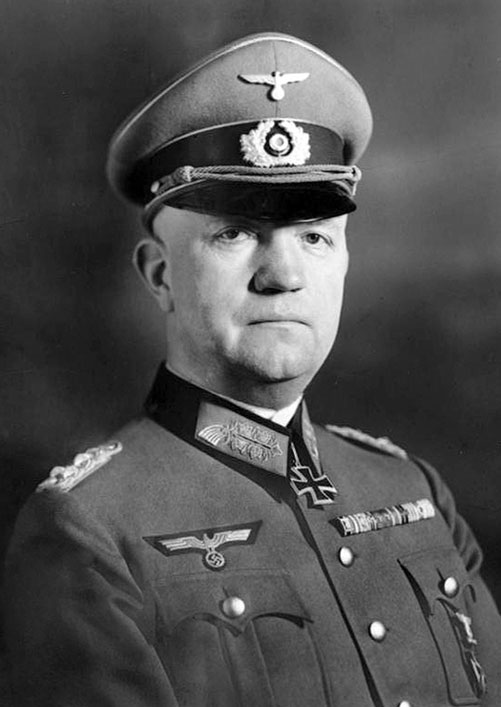 The basic plan was to trick the Reserves into seizing power after a coup in which Adolph Hitler was killed and the conspirators prepared in critical positions to take over Germany and sue for peace. All of them were anti-Nazis, and all of them German patriots. If all went well, the high command and the key Reserve commanders would believe that the SS and other powerful Nazis had attempted to overthrow the government, and the Reserves’ rescue of the Fatherland through Operation Valkyire should be supported to the fullest extent. Colonel General Fromm needed to be persuaded to call out the Reserves, and the conspiracy to assassinate Hitler had to succeed in order for the whole planned coup to work. Fromm was aware of plots to do away with the Fuhrer, but did not notify the Gestapo (Secret Police), so the conspirators held out hope of success. The conspirators approached three Field Marshalls for help but were rebuffed, though without the Generals’ reporting the coup plans to the SS. 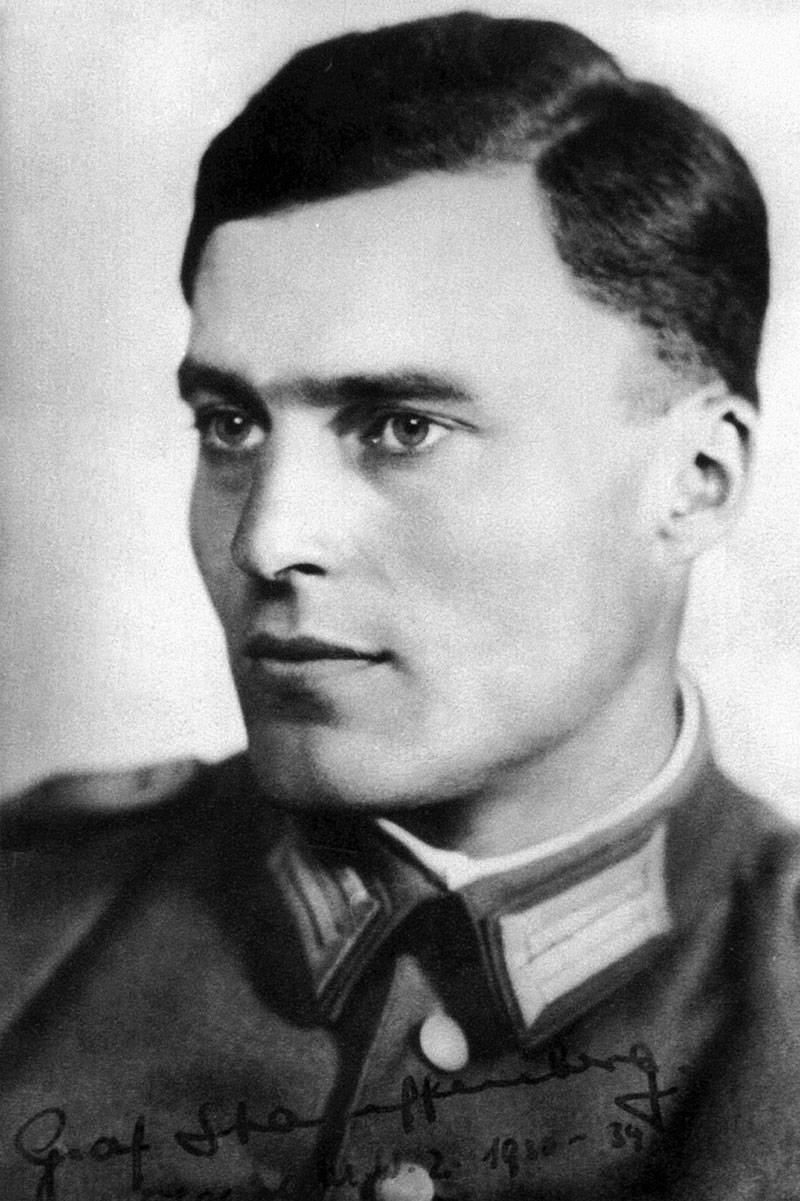 Thirty-six-year-old Bavarian Roman Catholic Lt. Colonel of the General Staff, Claus Maria Justinian Schenk Graf von Stauffenberg—a veteran soldier wounded in the Allied North Africa Campaign—after September of 1943 became the driving force behind the assassination plot to kill Hitler. When the General who had volunteered to blow up Hitler backed out, Von Stauffenberg agreed to plant the bomb that would kill the Fuhrer away from Berlin, and trigger the Valkyrie Operation that would secure the coup d’etat. 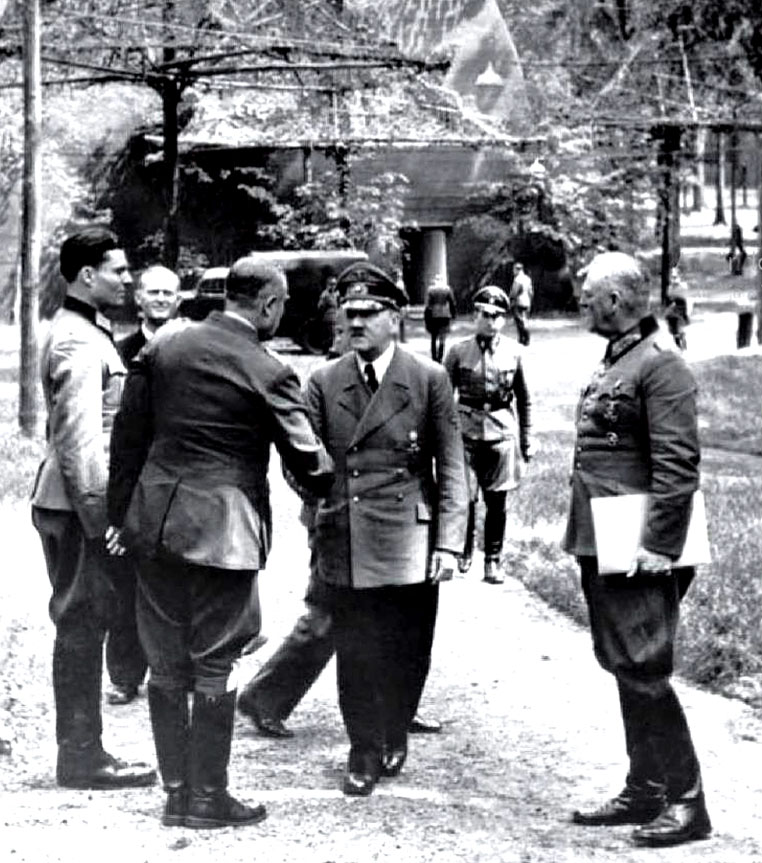 Meeting at the Wolf’s Lair on July 15, 1944 (five days before the July 20 plot was to take place), are from left to right: Stauffenberg, Puttkamer, unknown, Hitler, and Keitel

Hoping to get Himmler and Goring at the same time, Stauffenberg settled on a staff meeting without them there, at the “Wolf’s Lair” on July 20. At the last minute, the meeting was switched from the closed underground bunker to the wooden shed above, which had windows and would not contain the suitcase bomb’s explosion. Von Stauffenberg entered the room late for the meeting and placed the suitcase near Hitler. After Colonel Stauffenberg left the room supposedly to answer a phone call, an officer moved the suitcase a few feet under the heavy table. When the bomb exploded, four people were killed and everyone else injured, but the heavy oak table had protected Hitler from serious harm. He later rightly observed that “providence has protected me from an assassin.” 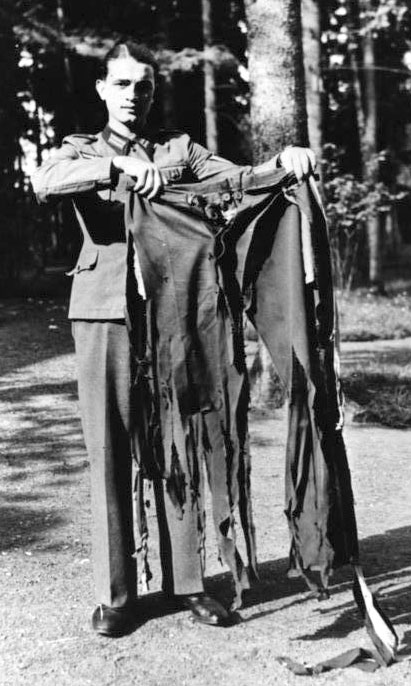 Following the failed July 20 Plot, an unknown soldier holds Hitler’s trousers to display the damage they sustained, demonstrating just how close a call it was. 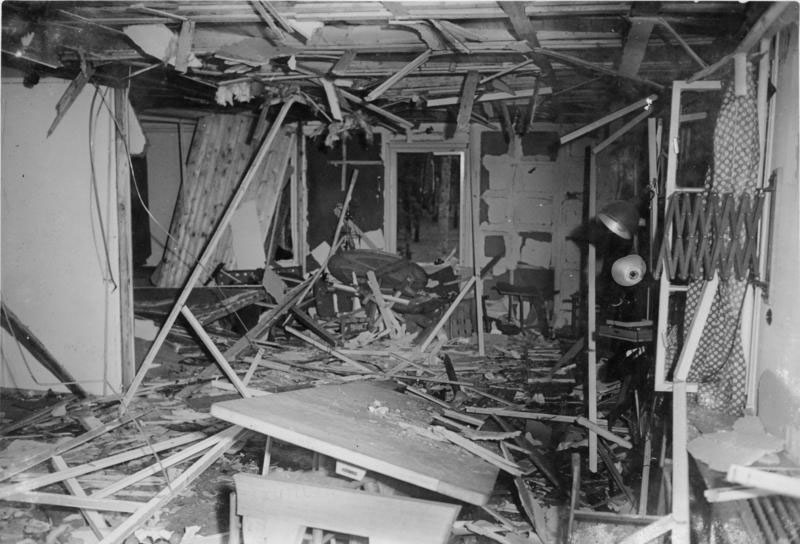 Stauffenberg escaped to the nearest airport with his aide and initiated the second part of the plot. When Hitler went on the radio to tell the country that he had escaped assassination, the conspiracy fell apart. The Gestapo and SS sprang into action to block the seizure of Berlin, and began a roundup of conspirators, executing them as caught and filming it for Hitler’s viewing pleasure. Eight conspirators were executed slowly; Colonel Von Stauffenberg’s last words were allegedly “long live sacred Germany!” Two hundred more were subjected to show trials before execution. In the end, it is estimated that at least 20,000 Germans were killed or sent to prison camps, including Field Marshall Irwin Rommel, perhaps the Third Reich’s greatest General, who was convinced to commit suicide because he was aware of the July 20 Plot before it occurred. Germany was subjected to eight more months of unbelievable horror until Hitler committed suicide in the Fuhrerbunker. 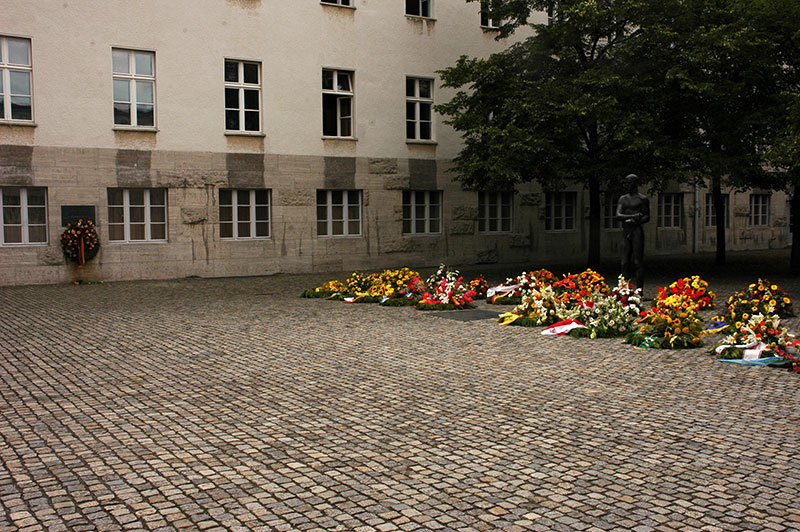 The yard at Beldlerstrasse where Stauffenberg, his aide 1st Lieutenant Werner von Haeften, General Friedrich Olbricht and Colonel Albrecht Mertz von Quirnheim were executed before 1:00 in the morning of July 21, 1944 by a makeshift firing squad in the courtyard, which was lit by the headlights of a truck

Historians have debated Colonel Stauffenberg’s motives ever since the Second World War. Four of his five children were put in foster homes and forbidden to use their surname. One became a General in post-war Germany, another son a Member of Parliament. His wife Nina said all the historians were wrong in their speculations about her husband. She died in 2006 at the age of 92. A German officer moving a suitcase two feet probably changed history in a most dramatic fashion. Providence remains inscrutable. 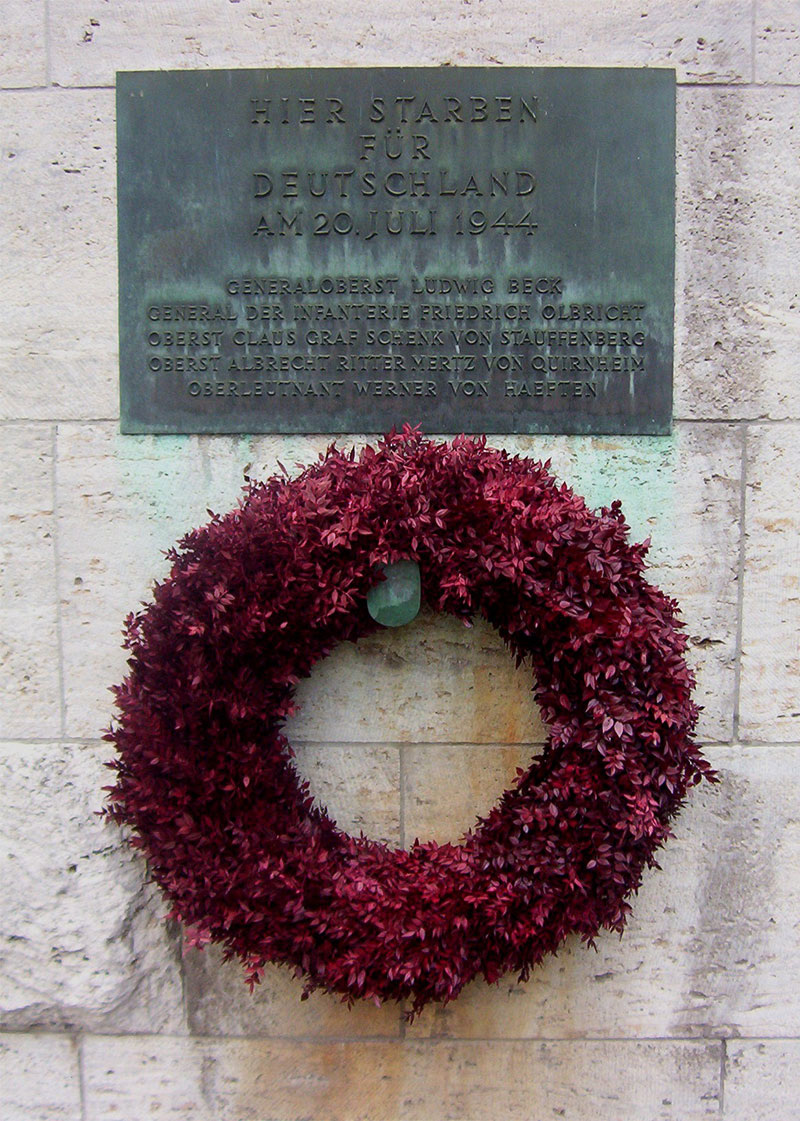 A plaque and wreath commemorate those involved in the Hitler assassination attempt of July 20, 1944, who were executed at this point in the inner courtyard of the Bendler Block

For more on the incredible story, the last two surviving members of the July 20 Plot both wrote books which have been translated into English, History Channel produced a special on the event, and there is a full-length film entitled Valkyrie, controversially starring Tom Cruise as Colonel von Stauffenberg.