“Blessed are the peacemakers, for they will be called children of God.” —Matthew 5:9

he year 2020 signified the Four Hundredth Anniversary of the establishment of Plymouth Plantation, an English expedition to the New World, people now designated as “the Pilgrims”. That handful of persecuted Christians left to future American generations a profound legacy of courage, hard work, suffering, and devotion to Christ. Led by their pastor John Robinson and elder William Brewster, they had adopted, in ironclad conviction, the basic doctrines of the Protestant Reformation, based on the divine revelation of the Holy Scriptures. But they had also separated themselves from the Church of England, a punishable crime. These Independents believed God should only be worshipped according to the commands of the Bible, a belief held by other Separatists and Presbyterians, a doctrine known as “the regulative principle of worship”. The congregation left England for the Netherlands, where such dissenters found a warm welcome. In 1620 a portion of Pastor John Robinson’s congregation pioneered another move, this time to the New World. 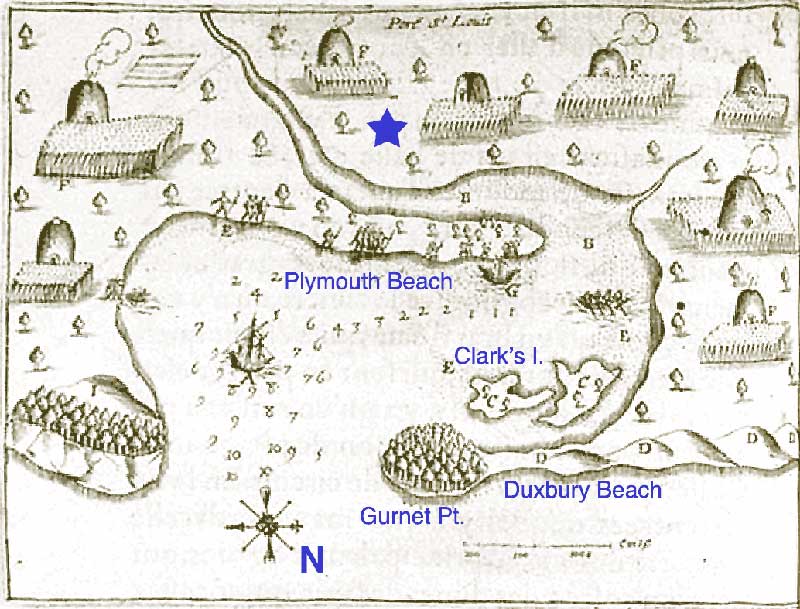 A hand-drawn map of Plymouth Bay, dated 1605 and showing the native settlements that existed in the area at the time, as well as the approximate eventual location of Plimoth Plantation (marked with a star) and other modern place names

Arriving along the coast of New England near Cape Cod in the winter, the small group of families finally chose an uninhabited harbor landing in which to settle, an area previously the location of the Patuxets, a native tribe wiped out by a plague (sometimes thought to be smallpox), in the two previous years. With only vague ideas regarding the peacefulness of local tribal people, the Pilgrims constructed a palisade, buried their dead secretly at night—half of their number as it turned out—and waited for spring. They sang praises and thanked God in prayer for His providential preservation of the ones who survived that first winter. Little could they have known that Providential preservation had just begun. 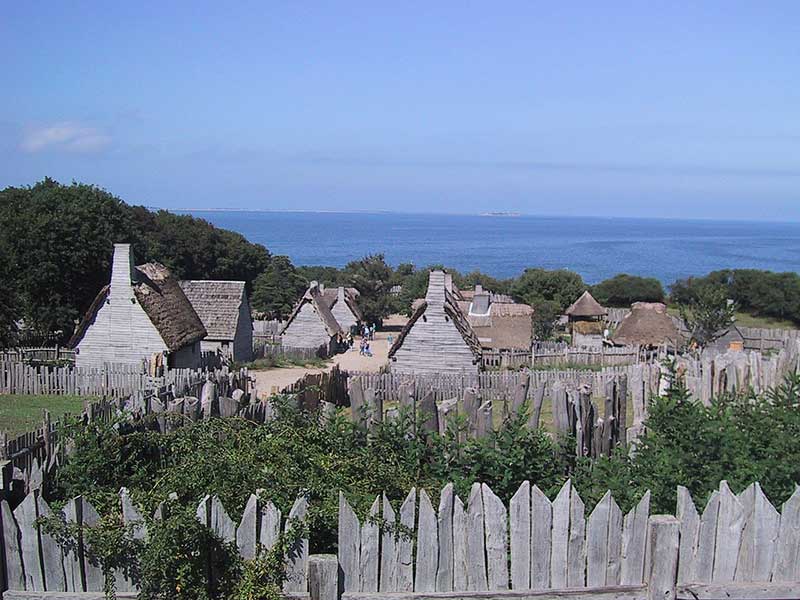 First contact with the local natives occurred on March 16, 1621, when Samoset, an Abenaki sagamore, strode into the settlement and proclaimed “Welcome, Englishmen!”. He had learned some English from coastal merchants and fishermen. From him they learned where they had settled, the name of a more fluent English-speaker among the local natives, Tisquantum, and the name of the paramount tribal chief of the Wampanoags, Massasoit. The Englishmen had organized for self-defense and appointed Miles Standish the commander of the militia, not knowing what to expect from the natives. If the Jamestown Colony that had been established in Virginia in 1607 had set a precedent, conflict could be expected; lethal fighting, and constant misunderstanding. In Mourt’s Relation they recorded that after Samoset had spent the night with them: 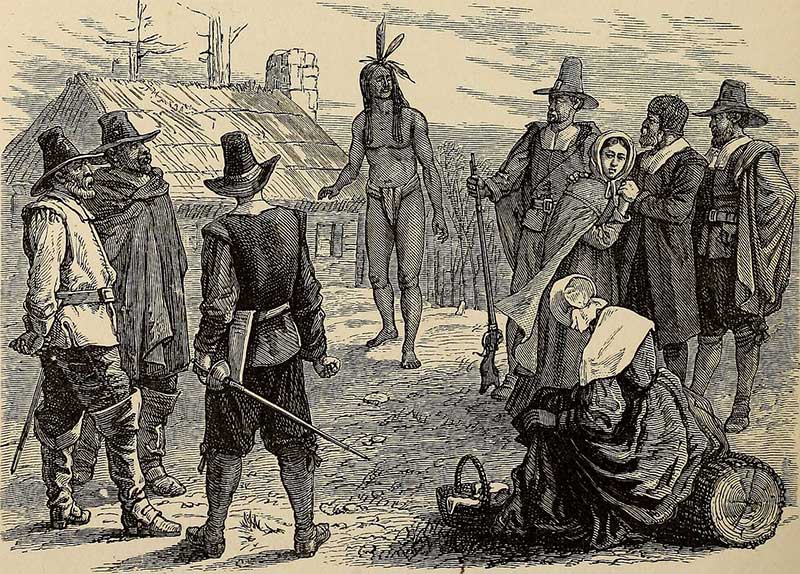 “…in the morning, we dismissed the savage, and gave him a knife, a bracelet, and a ring. He promised within a night or two to come again and to bring with him some of the Massasoits, our neighbors, with such beavers’ skins as they had to truck (trade) with us.” 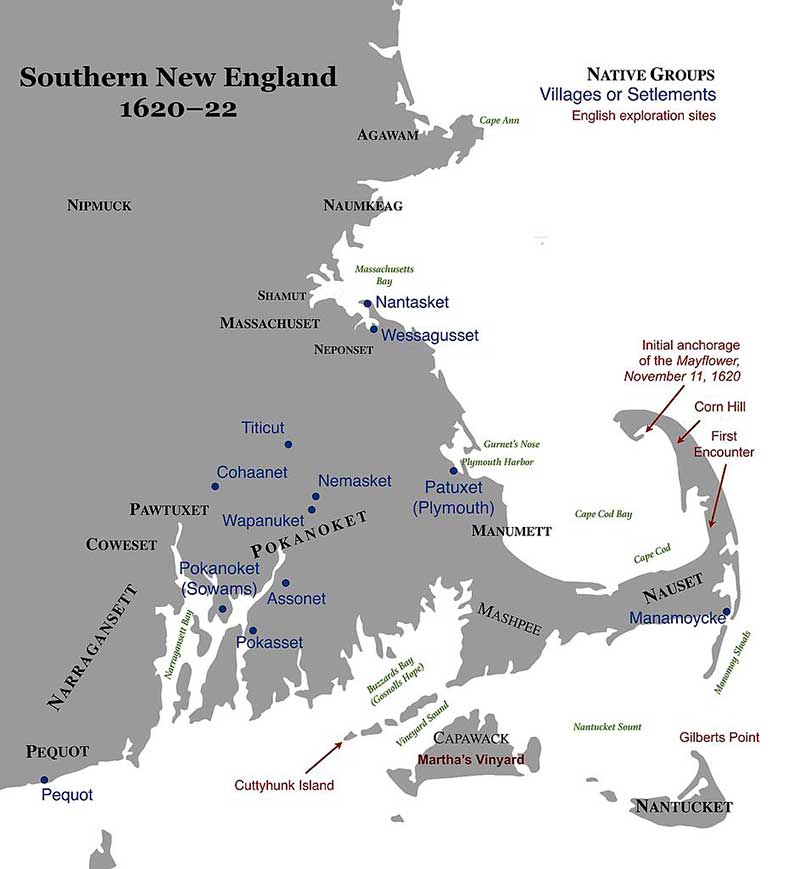 The Pilgrims desired peace, trade, and neighborly relations, but such had not been the experience of other expeditions. They had come as families, demonstrating the desire for permanence and certainly peaceful conditions. No doubt in their own minds, the Plymouth colonists had much trepidation regarding the native people. The chief of the Wampanoags did arrive, along with sixty warriors. Following tentative contact, in which both sides sent a few representatives to converse, the new translator, Squanto, was able to bring about enough rapprochement for the two sides to sit together comfortably:

“Our messenger made a speech unto him, that King James saluted him with words of love and peace, and did accept of him as his friend and ally, and that our governor [William Bradford] desired to see him and truck with him, and to confirm peace with him, as his next neighbor
…They saluted him and he them…our governor kissed his hand, and the king kissed him, and so they sat down…Then they treated of peace.” 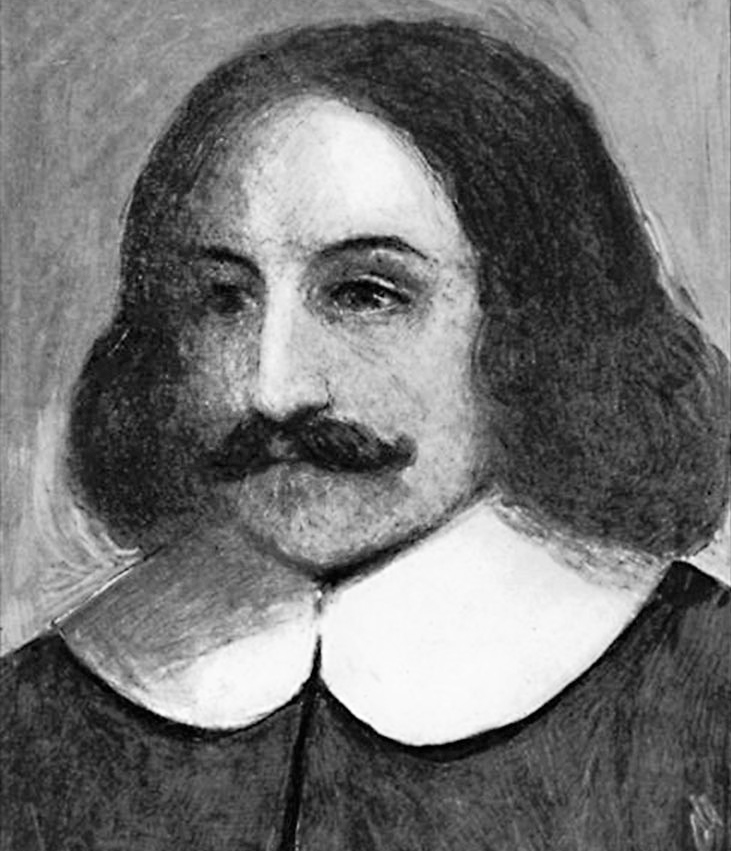 William Bradford (1590-1657), governor of Plymouth at the time of the peace treaty 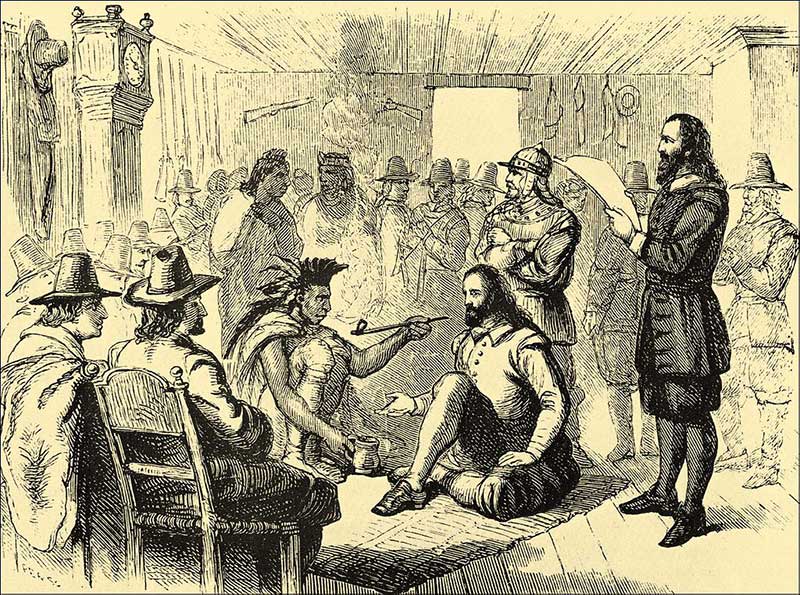 The peace agreement between Massasoit and the Pilgrims

Thus on March 29, 1621, the Pilgrims and Wampanoags made the first well-kept peace treaty between the English and the “first peoples”, and it lasted for more than fifty years! 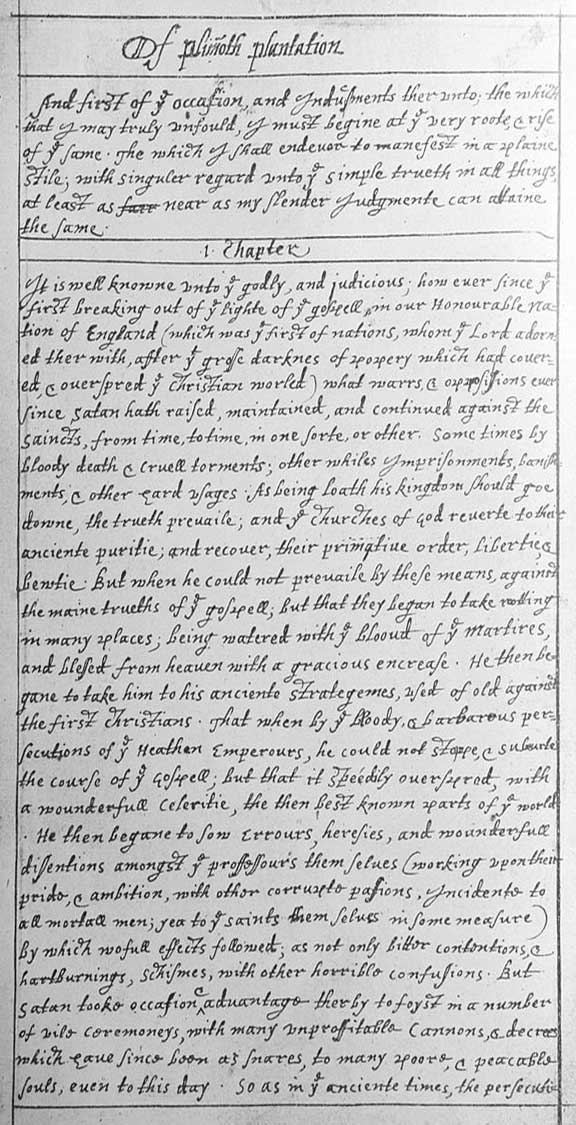 A page from William Bradford’s Of Plimoth Plantation, his account of the history of the settlement of the same name

Relations between the settlers and the natives were not perfect and disputes arose that were not settled amicably. The treaty held the two people together, however, and a satisfactory arrangement enabled them to live side by side in peace.

In our current day, where the Pilgrims are hated and vilified by a malevolent cabal of misinformed and ideologically driven academics and activists, may we keep in mind our duty to be both truth-seekers and peacemakers. 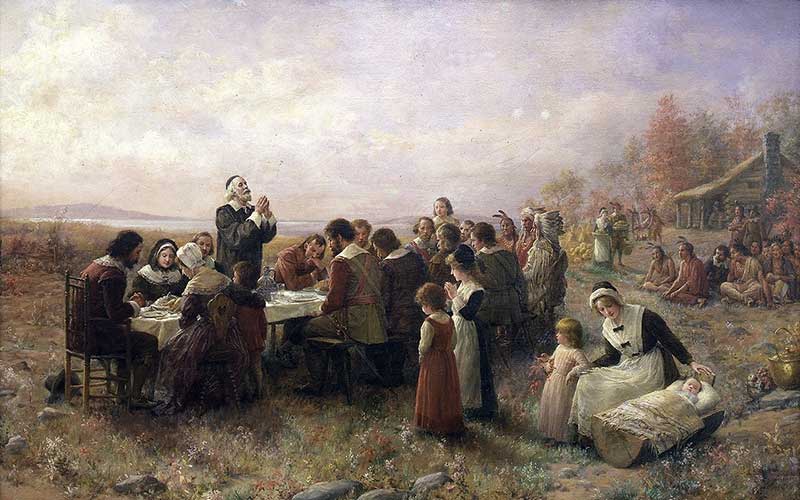 The First Thanksgiving, held nearly four hundred years ago in the autumn of 1621, and celebrated by the surviving Pilgrims, along with Massasoit and a large party of his people